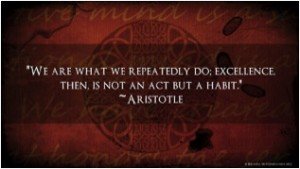 From my college classes decades ago, I can still clearly recall—thankfully—many “ah ha” moments. Most importantly is when I crystalized to purity and then confirmed structure by NMR the first compound I synthesized in Organic Chemistry Lab. Another ah ha moment—but on a completely different level—was during a philosophy class when the professor partially paraphrased a quote by Aristotle as “we are what we do.” The full quote given above is even more thought provoking because it ties in the notion of excellence, which I took to heart then, and have attempted to live by ever since.

The “we” and “excellence” extends not only to teams in sports but also companies. So when I was recently musing about 2016 marking TriLink’s 20th Anniversary and what it means, Aristotle’s sage opining came to mind. Then, in a quick series of mental flashes, I recognized that TriLink’s commercial longevity—and its tag line as “The Modified Nucleic Acid Experts”—reflect the excellence of the science that its customers collectively “do” and publish. That’s the genesis of this blog, which focuses on TriLink customer publications in 2015 that I’ve selected for commenting, and also some earlier customer work distinguished by being most cited. You can also click here to find out more about what TriLink has been doing over the past 20 years. 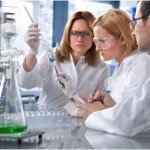 Since opening its doors for business twenty years ago, TriLink Biotechnologies grew from having its first customer to now having thousands of customers around the world at all types of colleges, universities, institutions, and companies. While there’s no way to know and peruse everything these folks investigate, their work leading to publications in which TriLink is specified as a supplier can be found through the amazing power of the internet.

Having said that, I took a “snapshot” of TriLink customer productivity (i.e. publications and patents) in 2015 by searching Google Scholar for the word “trilink,” unchecking citations, and then clicking “Since 2015.” Having performed this search in early Jan 2016, the found items totaling 266 cover a period of time just a tad over 12 months. So, if you allow me to assume 5 days per work week, the math gives very close to 1 publication or patent per day. This publication rate reflects—in my opinion—quite impressive TriLink customer productivity, especially when you also consider the additional scientific findings that are presumably published without citing TriLink as a supplier, or remain as significant but unpublished results (e.g. clinical diagnostics or commercial trade secrets). 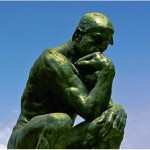 Frankly, I was amazed by the scope and diversity of scientific publications among the aforementioned 266 found items, and deciding which to select for commenting here was neither easy nor entirely objective. However, as the saying goes, “it’s a tough job, but somebody has to do it.” So after emulating—not posing as—Rodin’s The Thinker for some time, the following are my unranked picks with brief comments.

By now you’ll have likely recognized that use of base-modified NTPs for synthesis of modified mRNA is trending among these TriLink customer publications in 2015. To underscore this conclusion, here are a few more 2015 modified mRNA publication titles:

Hopefully this blog inspired by my Aristotelian musings has provided some illuminating information about TriLink customer publications that reflect the excellence of the products supplied. TriLink looks forward to another 20 years of providing excellence in nucleic acids products and manufacturing.