Is this the most enabling biotechnology yet? I think so, what do you think?

A list of Historical Events for 1983 includes Michael Jackson's "Thriller" album going to #1 and airing the final TV episode of "M*A*S*H" watched by a record 125 million viewers. Aside from this pop culture, 1983 was quite remarkable in the history of biotechnology. Two closely interconnected and unquestionably transformative events occurred: introduction of automated synthesis of DNA oligonucleotides (aka oligos) by Applied Biosystems, Inc. (ABI) and invention of PCR by Kary Mullis. My July 15th post gave scientific homage, if you will, to the enabling power of PCR and ended by noting that ready access to synthetic DNA oligos was, in effect, “enabling the enabler” and likewise deserves comment here.

Picks and shovels for the biotechnology gold rush

In recently published reflections entitled The Chemical Synthesis of DNA/RNA: Our Gift to Science, Prof. Marvin H. Caruthers gives a firsthand account of the initial development of the now well-known phosphoramidite (amidite) method for oligo synthesis with members of his research group at the University of Colorado at Boulder, notably, Serge Beaucage, Mark Matteucci, Bill Efcavitch, Curt Becker, and Lincoln McBride.

These reflections go onto a very interesting backstory on founding ABI in Foster City, California to commercialize automated oligo synthesis using solid-phase amidite methodology, as pictured below. This, together with automated protein sequencers, peptide synthesizers, and related “tools”, were envisaged as enabling the then emerging field of biotechnology. 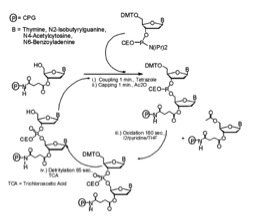 ABI’s co-founder and first CEO, Sam Eletr, metaphorically referred to ABI’s tool-provider business model as making the “picks and shovels for the biotechnology gold rush.” Bill Efcavitch, Curt Becker, and Lincoln McBride joined ABI to do this, while Serge Beaucage went to Beckman (which introduced its amidite-based DNA oligo synthesizer shortly after ABI), and Mark Matteucci joined Genentech to do oligo synthesis. For further background on the history of this revolutionary technology, click here for a 1983 publication by Köster and coworkers on β-cyanoethyl (CE) phosphoramidites in oligo synthesis. 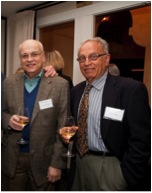 Mr. Andre Marion (left) and Dr. Sam Eletr (right), who co-founded ABI in 1980 (Bing Images) as a company that would manufacture and sell “picks and shovels for the biotechnology gold rush,” are still very active in commercial biotechnology.

My small part in this story involved being chosen as one of the early-access test sites for ABI’s first amidite-based oligo synthesizer (while at FDA/NIH), and then joining ABI in 1986 to commercialize new applications. These applications included automated amidite RNA oligo synthesis and scale-up (1umol → 10umol →200umol) of DNA oligos.  We focused on modified oligos as potential antisense inhibitors of mRNA function, particularly methylphosphonate (PCH3) and phosphorothioate (PS) oligos, which at the time were gaining scientific attention—and new venture investments—as the “next big thing” for targeted drug development.

Continuing the historical evolution and impact of the commercialization of oligo synthesis…Lynx Therapeutics was subsequently spun-out of ABI in 1992 to pursue antisense therapeutics.  Today, this field is led by Isis Pharmaceuticals.  It’s been a few years now and these applications are indeed proving to be the next big thing, as demonstrated by ISIS’s recent announcement of FDA approval of KYNAMRO™ (mipomersen sodium or ISIS 301012) for the treatment of homozygous familial hypercholesterolemia.

In this announcement, Stanley T. Crooke, MD, PhD, Chairman of the Board and CEO of Isis said that “KYNAMRO™ is the first systemic antisense drug to reach the market and is the culmination of two decades of work to create a new, more efficient drug technology platform.” The structure of ISIS 301012 is reported to be a hybrid RNA/DNA/RNA 20-mer that is fully PS-modified, and has five 2′-O-(2-methoxyethyl)-modified (2′-MOE) ribonucleosides at the 5′ and 3′ ends, ten 2′-deoxynucleosides in between; all cytosines are methylated at the C5 position: 5′-GCCTCAGTCTGCTTCGCACC-3′. PS and 2’-MOE modifications provide resistance to degradation by nucleases, while the central DNA segment allows RNase H-mediated cleavage of the mRNA target.

Congratulations to Dr. Crooke and to Isis for this milestone achievement for amidite chemistry! With over 25 other oligo drugs under active development in Phase 2 or higher, we expect to see the FDA approving more of these types of drugs in the near future. Click here for a survey and summary of these oligo drugs.

ABI’s original synthesis-scale for automated amidite DNA oligo assembly was 1umol, which was soon followed by 10umol and then 200umol batch-sizes. Far greater scalability was driven by the need for ever increasing amounts of oligos in preclinical animal experiments and subsequent clinical studies. Eventually, oligo drug commercialization required further investment in cost-effective process development. When I asked Dr. Yogesh Sanghvi, (formerly with Isis and founder/President of Rasayan, Inc.) about batch-size for oligo drug manufacturing, he said that “oligo synthesis scale has been increased to 750mmol using a solid-support method.“ Click here for his review of the current status of synthesis, chemical modifications, purification, and analysis of modified oligos for therapeutics.

By contrast to these very large single batch-sizes for manufacturing of an individual oligo drug, conventional gene synthesis and, especially, emerging applications in synthetic biology, require very small batch-sizes for manufacturing many thousands of different oligos. One way this has been achieved is through the use of multi-well plates for parallelized solid-phase synthesis of thousands of oligos at a time. Such approaches make “pennies per base” cost to customers a reality. If one assumes that ~1nmol and ~1mol single-batch scales are technically “doable,” then the scalability for solid-phase amidite synthesis is ~109-fold!

Fundamentally different strategies for producing huge numbers of tiny amounts of oligos employ massively parallelized array-based amidite synthesis, unblocking and cleavage from the array, and then either single-tube multiplex manipulations or use of water/oil picoliter-sized droplets.

Enabling never ending and expanding scope of science and technology

In this blog, I’ve explored the use of oligos in targeted drug development and the amazing diversity of manufacturing scales for oligos. These versatile enablers have also played—and continue to play—transformative roles in countless other areas of science and technology. Being a bit “PowerPoint-challenged” and squeezed for time, I opted for simply listing below various types of science and technology enabled in part by automated amidite DNA (and RNA) oligo synthesis. This list is not ordered in any way and it is not intended to be comprehensive, but it is quite an impressive list, nonetheless. There’s strong “entanglement,” so to speak, between DNA oligo synthesis and seemingly indispensable PCR (and other) amplification methods. Consequently, many of the listed items are “co-enabled” by oligo synthesis and amplification. Links to representative literature or websites are provided for readers who may be interested in more information.

There’s absolutely no doubt in my mind that currently available automated amidite oligo chain-assembly will continue to enable significant expansion of major nucleic acid-based applications beyond the types listed below. It’s less clear to me whether a non-amidite method will be invented to replace amidite chain-assembly for some applications and/or enable new applications for which amidite methodology is inadequate. Other chemical and/or enzymatic processes are conceivable, and there are likely some very creative minds musing over possible ways to outperform amidites relative to “faster, better, cheaper” oligo production, so never say never. 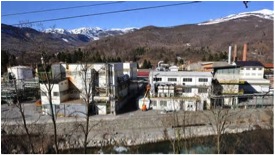 Sanofi’s newly launched facility for large-scale production of semi-synthetic artemisinin, a potent anti-malarial represents a further milestone in an anti-malarial drug partnership led by OneWorld Health, a non-profit drug development organisation, with funding from the Bill & Melinda Gates Foundation. Sanofi plans to have 60 tons per year capacity in 2014, which would meet at least a third of the annual global need for the drug (taken from European Biotechnology News via Bing Images). Click here for more on this facility and here for a 2013 Nature publication of the science. 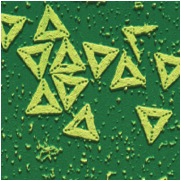 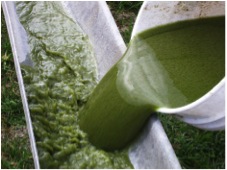 Biodiesel can be made from algae; click here for advantages of using algae for biofuel production (taken from our-energy.com via Bing Images).