Welcome to my inaugural blog post!  My intention is to provide timely nucleic acid-related scientific content that is informative and, hopefully, will be of interest to a broad readership. New posts will be published biweekly so please check back often.  I encourage thoughtful commentary as well as constructive suggestions.  To find out more about me and my relationship with TriLink Biotechnologies, please visit the ‘About Jerry’ tab at the top of the page.

Considering TriLink’s focus on providing nucleic acid-based products, it seemed appropriate that this inaugural post feature the upcoming 60th anniversary of Watson & Crick’s proposed structure for DNA published in Nature on April 25, 1953. It is widely acknowledged that insights provided therein had a fundamentally transformative impact on science and society. Anyone working with DNA should take a bit of time to read this historically important publication that is freely available at Nature.com. Doing so reveals an extremely brief report—one page and one figure—with perhaps the most understated—and similarly brief, one sentence!—conclusion suggesting the structural basis for genetic encoding by DNA sequence and its replication: 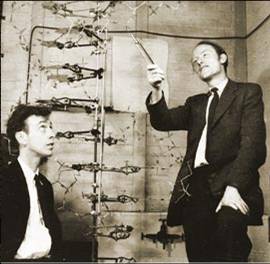 “It has not escaped our notice that the specific pairing we have postulated immediately suggests a possible copying mechanism for the genetic material.”

Those interested in an annotated and illustrated autobiographical account of this making of a scientific revolution are referred to a recent book by James D. Watson, Alexander Gann and Jan Witkowski, The Annotated and Illustrated Double Helix that has already received numerous excellent reviews.  There is also a YouTube video of a delightful presentation by Dr. Watson that is well worth watching to see and hear the story of events leading to the 1953 publication and subsequent recognition that DNA is transcribed into mRNA for translation into protein. This new knowledge coupled with the availability of various molecular biological “tools,” and initial advances in oligonucleotide synthesis, set the stage for an exciting race during the late 1970s to synthesize for the first time a medically important human gene—insulin—involving three main groups—Harvard University, University of California at San Francisco, and City of Hope National Medical Center. This fascinating story involving science, egos, and the beginning of bio-venture “start-up” financing that collectively spawned Genentech and Biogen—and subsequent “genetic engineering” companies—is engagingly chronicled by Stephen S. Hal in the book Invisible Frontier-The Race to Synthesize a Human Genome through interviews with numerous individuals who were directly involved.

Through many advances in DNA Sanger sequencing methods and automated instrumentation during 1990-2003, base-by-base sequence determination of the entire human genome was realized by parallel public (government funded) and private (Celera Corporation) efforts.1 During the next decade, taking us to 2013, there has been stunning progress in developing various methods of massively parallel sequencing2 (aka “next-generation sequencing”) that, in part, has enabled further elucidation of epigenomics and RNA-mediated regulation as well as factor-mediated reprogramming of cells and pursuit of regenerative medicine. Such topics were discussed at a recently held Cold Spring Harbor Laboratory meeting entitled “From Base Pair to Body Plan - Celebrating 60 Years of DNA.” Below are just a few selected author names (in alphabetical order) and titles of presentations taken from the list of nearly 50 talks or posters found at the website for this event.3

Celebrating the discoveries of the "hard drive" of DNA and its "software package," the epigenome—Basic and translational implications

In closing this inaugural blog post, one can only wonder what new and exciting aspects of life sciences, diagnostics and medicine—including regenerative—will be realized during the next 10 years on the way to the 70th Anniversary of the Discovery of DNA’s Double Helix Structure. My view of future advances based on DNA fall into three interrelated areas:

These thoughts about the next decade for DNA will be elaborated in my future posts.  What do you see happening during this time?