Aptamers are highly structured nucleic acids that bind to a specific target molecule. RNA or DNA aptamers are usually selected from a very large pool (aka library) of random sequences, and can be comprised of either natural and/or chemically modified nucleotides. My first blog on aptamers was titled Aptamers: Chemistry Bests Mother Nature’s Antibodies. This purposefully provocative claim was intended to emphasize the growing body of evidence that collectively indicates aptamers can perform better than antibodies in many applications.

NMR-derived structures of aptamers binding to either a large protein or small molecule. Taken from genelink .com 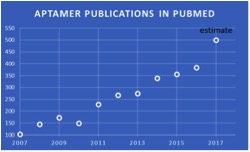 Because it has been nearly four years since that boastful blog in 2013, I thought it was time to survey aptamer applications published since then to comment on what has been trending or is otherwise notable. I found more than 1,500 articles in PubMed for 2014 through 2017 (estimate) that have the search term “aptamer” in the title or abstract. Given this huge number of publications, I used Google Scholar citation frequency as a numerical indicator of interest, importance and/or impact for these publications in each year. I also decided to focus on original publications that, by definition, excludes review articles.

This Chinese team of researchers led by uber-prolific Weihong Tan, about whom I’ve previously blogged, designed a novel methodology for imaging tumor cells using quenched-fluorescent aptamers. In the presence of target cells, the binding of these “dark” aptamers to cell surface markers weakens the adsorption of aptamers on MnO2 nanosheets causing partial fluorescence recovery (i.e., unquenching), thus illuminating the target cells, as well as facilitating endocytosis into target cells. After endocytosis, reduction of MnO2 nanosheets by glutathione further activates the fluorescence signals and generates large amounts of Mn2+ ions as a contrast agent for magnetic resonance imaging (MRI). 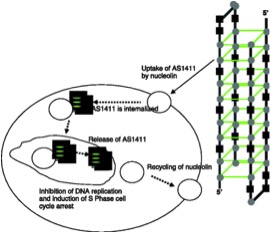 The anticancer mechanism of action for DNA aptamer AS1411, which has multiple G-quadruplex moieties that disrupt cancer cell replication following nucleolin-mediated uptake, is depicted below and detailed elsewhere. In this clinical study, it was found that AS1411 appears to have limited activity in patients with metastatic renal cell carcinoma. However, rare, dramatic and durable responses can be observed and toxicity is low. Further studies with AS1411 and other nucleolin-targeted compounds may benefit from efforts to discover predictive biomarkers for response.

Aflatoxin B₁ (AFB1) produced by Aspergillus flavus and A. parasiticus is considered the most toxic aflatoxin and it is highly implicated in hepatocellular carcinoma in humans. In this work by Korean researchers, a rapid and simple dipstick assay based on an aptamer has been developed for determination of AFB1 contamination in food. The dipstick assay format was based on a competitive reaction of a biotin-modified aptamer specific to AFB1 between target and Cy5-modified DNA probes. Streptavidin and anti-Cy5 antibody as capture reagents were immobilized at test and control lines on a membrane of the dipstick assay. The method was confirmed to be specific to AFB1, and the entire process of the assay can be completed within 30 min. 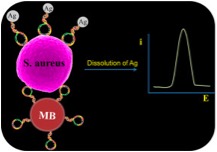 Staphylococcus aureus (S. aureus) is one of the most important human pathogens and causes numerous illnesses. This report by Iranian researchers describes a sensitive and highly selective dual-aptamer-based sandwich immunosensor for the detection of S. aureus. As depicted below, a biotinylated primary anti-S.aureus aptamer was immobilized on streptavidin coated magnetic beads (MB), which serves as a capture probe. A secondary anti-S.aureus aptamer was conjugated to silver (Ag) nanoparticles such that, in the presence of target bacterium, a sandwich complex is formed on the MB surface and the electrochemical signal of Ag is measured by anodic stripping voltammetry.

Chloramphenicol (CAP) shown below is a naturally occurring antibiotic that is artificially manufactured for use in veterinary and human medicine. Due to its adverse effects in humans, use of the antibiotic is restricted and, in Europe, ‘zero tolerance’ for CAP in food products has been legislated. In this report by Chinese researchers, detection of CAP uses aptamer-conjugated magnetic nanoparticles for both recognition and concentration, together with upconversion nanoparticles for detection. The method was validated for measurement of CAP in milk vs. a commercially available enzyme-linked immunosorbent assay (ELISA) method.

This work by Chinese investigators describes a novel aptamer/graphene interdigitated gold electrode piezoelectric sensor for detecting S. aureus by binding to the aptamer, which is immobilized on the graphene via the π–π stacking of DNA bases, as depicted below. When S. aureus is present, aptamer dissociates from the graphene and thus leads to change of oscillator frequency of the piezoelectric sensor.

This study in the UK uses a thiolated DNA aptamer for prostate specific antigen (PSA) immobilized on the surface of a gold electrode. Controlled electropolymerization of dopamine around the complex served to create an imprint of the complex following removal of PSA. This molecularly imprinted polymer (MIP) cavity was found to act synergistically with the embedded aptamer to provide recognition properties superior to that of aptamer alone. A generalized depiction for producing a MIP is shown below. 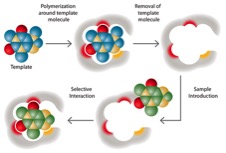 Monitoring the periodic diurnal variations in cortisol (aka hydrocortisone, show below) from small volume samples of serum or saliva is of great interest, due to the regulatory role of cortisol within various physiological functions and stress symptoms. This publication from China reports use of aptamer-functionalized gold nanoparticles pre-bound with electro-active triamcinolone for detection of cortisol based on its competitive binding to the aptamer by monitoring a signal from the displaced triamcinolone using square wave voltammetry at graphene-modified electrodes. The assay was benchmarked vs. ELISA and radioimmunoassays.

In yet another publication from China, Liu et al. report use of a G-quadruplex nanostructure to target cancer cells by binding with nucleolin, in a manner analogous to that mentioned above. A second component is double-stranded DNA (dsDNA), which is rich in GC base pairs that can be applied for self-assembly with doxorubicin (Dox) for delivery to resistant cancer cells. These nanoparticles were found to effectively inhibit tumor growth with less cardiotoxicity.

Here are my Top 3 “fav” aptamer articles published during the first half of 2017, and my reasons for these aptamer selections—pun intended. Interested readers can consult the original publication for technical details.

CRISPR/Cas9 is unquestionably—in my opinion—the hottest topic in nucleic acid-based R&D these days, as I have previously blogged about. Off-target effects of CRISPR/Cas9 can be problematic, so using targeted delivery to cells of interest is an important approach for mitigating this problem. In this study, an aptamer-liposome-CRISPR/Cas9 chimera was designed to combine efficient delivery with adaptability to other situations. The chimera incorporated an RNA aptamer that specifically binds prostate cancer cells expressing the prostate-specific membrane antigen as a ligand, and the approach “provides a universal means of cell type-specific CRISPR/Cas9 delivery, which is a critical goal for the widespread therapeutic applicability of CRISPR/Cas9 or other nucleic acid drugs.”

This report claims the first ever development of a split aptamer that achieves enhanced target-binding affinity through cooperative binding. In this instance, a split cocaine-binding aptamer incorporates two binding domains, such that target binding at one domain greatly increases the affinity of the second domain. This system afforded specific, ultra-sensitive, one-step fluorescence detection of cocaine in saliva without signal amplification. This limit of detection meets the standards recommended by the European Union's Driving under the Influence of Drugs, Alcohol and Medicines program.

Environmental contamination with pesticide residues has necessitated the development of rapid, easy and highly sensitive approaches for the detection of pesticides such as malathion, a toxic organophosphorus pesticide, widely used in agricultural fields. These Indian investigators employed an aptamer, cationic peptide and unmodified gold nanoparticles. The peptide, when linked to the aptamer renders the gold nanoparticles free and therefore, red in color. When the aptamer is associated with malathion, however, the peptide remains available to cause the aggregation of the nanoparticles and turn the suspension blue. The sensitivity was tested in real samples and the results implied the high practicability of the method.

I was pleasantly surprised to find more than 250 publications on aptamers in Google Scholar citing the use of TriLink products since 2014. This volume of literature is way too large to summarize succinctly, so I decided to do a quick scan to select the following items that provide an indication of the broad diversity of applications partially enabled by TriLink products:

In closing, I should first mention that, while scanning the aptamer/TriLink publications mentioned above, it was evident that the most frequently cited TriLink products were 2’-F-CTP and 2’-F-UTP, which are incorporated into aptamers to impart nuclease resistance, as discussed on a TriLink webpage.

My second and last comment is that, as you may have noticed, there seems to be a high proportion of aptamer publications coming out of China and/or coauthored by Chinese investigators collaborating with researchers in other countries. This despite the fact that Chinese publications in Life Sciences are ~6-times fewer that those from the US, according to reliable statistics. I have no idea why this is so, but thought it’s an intriguing factoid.