I apologize for the somewhat cryptic headline and mathematical byline for this blog, but they really do encapsulate the following: the underlying molecular biology involves a novel antisense oligo approach to “turn on” a protein, in contrast to all previous use of an antisense oligo to “turn off” a protein. I’ll rationalize the mathematical analogy later. 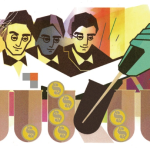 Recognizing the potential therapeutic value of this “turn-on” mechanism, a startup company with the quirky name cuRNA—a contraction for “cure” and “RNA”—was founded, and was acquired by OPKO—a health care conglomerate—and renamed OPKO-CURNA.

What follows is a condensed version of the full story of yet another example of how basic discoveries in nucleic acid research have “morphed” into new therapeutic strategies, which in turn lead to the genesis of small start-ups that oftentimes get acquired by bigger pharma companies. All of these kinds of stories include variations on a theme that are both informative and interesting—in my opinion.

The very beginning of this story goes all the way back to my dear departed friend Paul Zamecnik—widely hailed as the ‘Father of Antisense’—who first published in 1978 the then radically new idea of using a synthetic oligo (that had to be hand-made since this was before DNA synthesizers) to hybridize to mRNA encoding a protein of interest, and thus “turn off” expression of that target protein. The synthetic DNA oligomer came to be called an ‘anti-sense’ oligonucleotide (aka ASO) because its sequence is complementary to the target gene's mRNA, which is called the ‘sense’ sequence, as is the corresponding ‘sense’ DNA strand encoding the mRNA. More technical information on this now “classic” antisense approach can be found on the TriLink website.

Fast forward to the early 21st century and modern (i.e. post-Sanger) sequencing of the whole transcriptome revealed—to much surprise—that all sorts of noncoding RNA (i.e. RNAs that are not mRNA) derived from theretofore mislabeled ‘junk DNA’ included thousands of so-called ‘natural antisense transcripts’ (NATs). As depicted below, a NAT RNA can block expression of its cognate sense RNA. 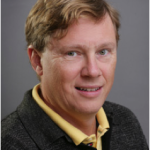 In 2006, it was proposed by Claes Wahlestedt at The Scripps Research Institute (TSRI) in Florida that NATs represented novel therapeutic targets to influence the expression of genes or pathways that were previously considered to be ‘undrugable.’

More specifically, and in his own words, Wahlestedt stated the following: “…knockdown of [an>

In traditional small molecule pharmacology, an agonist is a chemical that binds to a receptor and activates the receptor to produce a biological response, i.e. action. To me, Wahlestedt’s proposed elevation of expression of the sense-gene (i.e. “turn on” a protein using an anti-antisense oligo), is a truly novel and compelling pharmacological approach for antisense oligos, which typically “turn off” target proteins, and is primarily why I chose to highlight anti-NATs in this blog.

In my mind, antisense oligos and NATs are each formally analogous to “-1,” so targeting an antisense oligo against a NAT to increase protein level is functionally like (-1) X (-1) = 1. In other words, multiplying (using) two negatives (antisense) to get a positive (sense-encoded protein).

cuRNA: Quirky Spelling for a Startup

According to a short story in the Palm Beach Post in 2010, Wahlestedt armed with 80 (!) patent filings founded the company cuRNA with funding by Joe Collard, ‘a Delray Beach millionaire who made his money founding a tech company.’ It goes on to say that ‘[i>

n one promising bit of research, Wahlestedt has used an upregulation drug to keep mice from gaining weight even as they gorge on high-fat foods. Wahlestedt and his researchers were able to get the mice's bodies to create more of a protein that offsets the effects of an unhealthy diet.’

y wife doesn't really like it, but I'm funding it.” To preserve their domestic tranquility, I hope he’s successful. But I digress… 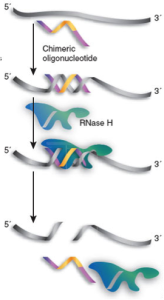 Two years later in 2012, Wahlestedt and coworkers reported in venerable Nature Biotechnology the first proof-of-concept that NATs can function as repressors of specific genomic loci and that their removal or inhibition by an ‘AntagoNAT’ oligonucleotide leads to transient and reversible upregulation of sense gene expression. The exemplary protein “turned on” both in vitro and in vivo protein involved Brain-Derived Neurotrophic Factor (BDNF).

For chemistry aficionados, the AntagoNATs were so-called gapmer single–stranded oligonucleotides (see image below), 14 nucleotides in length, with 2’O-Methyl RNA and/or locked nucleic acid (LNA) modifications.  These LNAs tiled the entire overlapping region between human BDNF-AS and BDNF transcripts, of which several were found to be efficacious AntagoNATs capable of upregulating of BDNF mRNA. They also demonstrated the efficacy of AntagoNATs that were single-stranded gapmer LNA-modified DNA oligonucleotides (AntagoNATs) 16-nucleotides in length with phosphorothioate backbone.

As has happened with many promising but budget-limited bio-therapeutic startups, cuRNA became attractive for acquisition for bigger, established pharma companies in need of new product development pipelines. These pharma companies have the financial “deep pockets” to pay for relatively expensive post-discovery preclinical and clinical studies. For cuRNA the acquirer was OPKO, a conglomerate health care company. As a subsidiary of OPKO-CURNA, AntagoNAT Therapeutics states it is currently conducting preclinical studies for proteins associated with orphan diseases (see below) such as Dravet syndrome (severe epilepsy of infancy), Rett syndrome (postnatal neurological disorder), and MPS-1 disease (wide range of symptoms).

Animal studies confirm increases of target mRNA and proteins expressed by the target gene, and eight AntagoNATs are stated to have been successfully tested in animals.

As a final comment, it appears to me that there’s a continuing trend among oligo-based drug developers to target orphan diseases. These are diseases that have not been “adopted” by the pharmaceutical industry because there is little financial incentive for the private sector to make and market new medications to treat or prevent it.

This trend toward “adopting” orphan diseases is obviously heartening for persons and families coping with these largely neglected-by-pharma diseases—a trend advocated and funded by NIH under the umbrella of Genetic and Rare Diseases. In this regard, I was surprised to find that all rare diseases in children are comparable in number to cancer, according to this recently reported quote by Dr. David Goldblatt:

‘If we put all the rare diseases together there are suggestions that they are more common than cancer. This is not a niche thing.’ 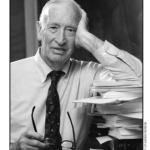 From the perspective of AntagoNAT Therapeutics, as well as other drug developers, the compelling nature of orphan diseases makes it somewhat easier to obtain FDA approval. However, recouping expenses and earning a profit can lead to very high costs of treatment for rare diseases.

In any case, let’s all hope that AntagoNATs become another arrow in the quiver of oligo-based therapeutics, and be grateful to Paul Zamecnik for having fathered an ever expanding field of nucleic acid-based drugs.