Devoted readers of Zone In With Zon who have photographic memories—or anyone who simply uses this blog’s search engine—will know that my first blog on aptamers touted these nucleic acids as being better than antibodies in many applications. That deliberately provocative proclamation was followed by a second blog on aptamers featuring top-cited publications, and also included aptamer studies which cited TriLink products in the methods section. The present, third blog on aptamers focuses entirely on clinical applications.

In the interest of full disclosure, picking this blog’s titled topic was catalyzed, so to speak, by my being invited to contribute a chapter devoted to clinical aspects of aptamers for a book on nucleic acids therapeutics to be published in 2019. After this book becomes available, I’ll be able to comment on its well-known co-editors, many contributors, and comprehensive contents. However, for now, here are “sneak previews” of some items that will be covered in my chapter. 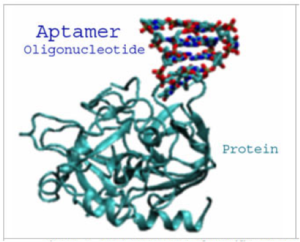 Aptamers are highly structured nucleic acids that bind to a specific target molecule. RNA or DNA aptamers are usually selected from a very large pool (aka library) of random sequences, and can be comprised of either natural and/or chemically modified nucleotides. Clinical applications of aptamers, with or without chemical modifications, are all predicated on target-specific binding.

However, as depicted below for diverse examples, aptamers can function as therapeutic agents per se, or as targeting agents. Direct agency of an aptamer drug can include binding to either extracellular protein, cell-surface protein, or viral surface protein, wherein each target is associated with a specific disease or clinical indication of interest for achieving therapeutic intervention. These three targets are also addressable by conventional small molecules or antibodies; however, it was recognized early on that aptamers might provide advantages in specificity or cost, respectively. 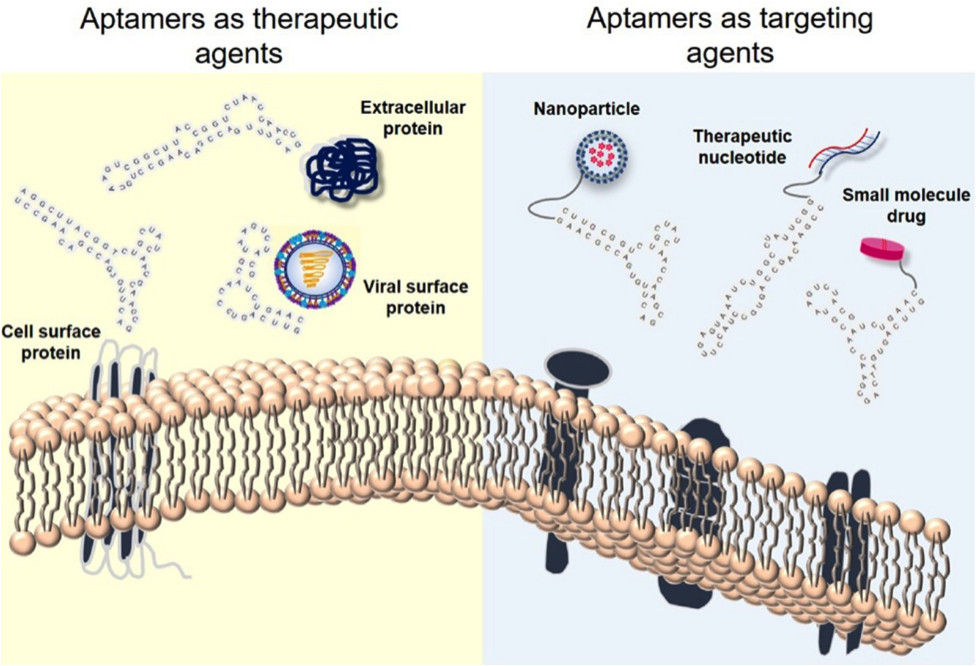 Use of aptamers as targeting agents is depicted as conjugates for delivery of either a nanoparticle loaded with drug, therapeutic oligonucleotide, such as short-interfering RNA (siRNA), or small molecule drug, such as a cytotoxic agent. Although the present blog is devoted to the first modality, namely, aptamers as therapeutic (i.e. clinical) agents, a review by Poolsup & Kim can be consulted for information on the second mode, namely, aptamers as targeting agents.

ClinicalTrials.gov is my “go to” website for obtaining reliable information on clinical investigations in general. This freely accessible website is a comprehensive registry and results database of publicly and privately supported clinical studies of human participants conducted around the world. This trove of information, which is provided as a service of the U.S. National Institutes of Health, is currently comprised of 261,814 clinical research studies in all 50 states and in 201 countries.

The ClinicalTrials.gov website is relatively easy to navigate, and has built-in help “buttons” as well as dropdown menus as aids to find and filter the extensive amount of available information. My search results from ClinicalTrials.gov several months ago using the term “aptamer” provided information for 32 different clinical studies, which when sorted by medical conditions gave 87 items covering a wide range of diseases, with ocular being the most prevalent general category. However, my reading of procedural details for all 32 studies revealed that, in 4 studies, samples from subjects treated with non-aptamer drugs were to be used for in vitro investigations such as screening for aptamer biomarkers. The remaining 28 clinical studies involve aptamer drugs per se, about which I’ll comment below.

Status of Aptamer Studies in ClinicalTrials.Gov 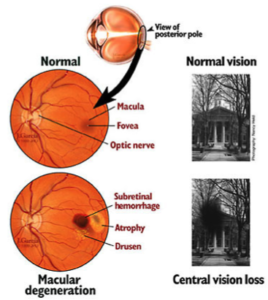 These categories can be used as filters to easily group studies for perusal, which when I did so, led to several general observations. The overwhelming majority of the 17 Completed clinical studies involve ocular diseases, of which age-related macular degeneration (ARMD) was a frequently studied indication. ARMD is the leading cause of blindness for people over the age of 55 years, in the U.S. and Europe, and occurs as either "dry" or "wet" ARMD, as described elsewhere.

While ARMD is a significant medical problem, my guess as to why it was chosen for initial clinical studies with aptamers is that clinical development had fewer practical challenges. Ocular administration required much smaller amounts of drug, which made manufacturing scale-up less problematic, and there were likely less toxicity issues to worry about. In any case, the sponsors included Eyetech Pharma, Ophthotech Corp, Achemix and NOXXON.

Terminated or Withdrawn studies, which numbered 8, were also mostly ARMD-related but also included aptamer for hemophilia and acute myeloid leukemia sponsored by Baxalta and Antisoma Research. Perhaps most important are the Active studies, which were only 3 in number, and I’ve put into tabular form here with some basic information including the National Clinical Trials (NCT) identification number that is searchable in any search engine. You can click on each NCT number to access detailed information provided in ClinTrials.gov; however, following are some snippets for each of these Active Studies.

Table of Active Studies Listed in ClinicalTrials.Gov in 2017 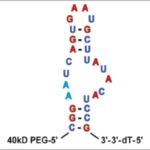 Pegaptanib sodium (aka Macugen), which originated at NeXstar Pharma and was later taken on by Ophthotech via Eyetech, is a 5’-PEG (40kDa)/3’-inverted dT blocked 2′-fluoro/2′-O-methyl modified 27-mer RNA aptamer targeted against vascular endothelial growth factor (VEGF), and is the only FDA-approved aptamer drug. This Active Study is a single-center trial at the Retina Institute of Hawaii, and involves loading of intravitreal pegaptanib bi-weekly during the initial treatment period for diabetic macular edema (DME) when levels of VEGF, its protein target, are the greatest. This is followed by gradually extending the administration frequency to monthly as homeostasis ensues for the treatment of DME. This study was registered in 2011 and is currently recruiting patients.

ARC1905 (aka Anti-C5 Aptamer and Zimura) is reported to be a 38-mer aptamer sequence that was originally identified from a 2′-fluoro-pyrimidine-modified library, and all but three purines could be replaced by 2′-O-methyl purine nucleotides. For in vivo applications, an inverted dT and a 40 kDa PEG moiety were added to the 3′ and 5′ end, respectively, according to a review. Opthotech’s study of ARC1905 assesses the safety and efficacy of intravitreous administration in subjects with geographic atrophy secondary to dry ARMD. This study was registered in 2016 and is currently recruiting participants in numerous locations in the U. S. as well as some sites in Hungary.

Ophthotech’s E10030 (aka ARC127, Fovista), which is an anti-PDGF-BB aptamer, is reported to be a 36-mer published in 1996 that was derived from a DNA library, and was only modified with a 3′-inverted dT moiety to inhibit exonuclease degradation. Further shortening and post-SELEX modifications (2′fluoro pyrimidines, 2′-O-methyl purines, internal hexyl-linkers, all wherever possible) is reported to improve nuclease resistance and resulted in a 32-mer that was later named ARC126, and then ARC127 when pegylated at the 5′ terminus. Ophthotech’s Active Study of E10030 is an open-label trial located at Retinal Consultants of Arizona for safety, tolerability and development of subfoveal fibrosis by intravitreal administration of altering regimens of this aptamer drug and anti-VEGF therapy in subjects with neovascular ARMD. This study is ongoing but not recruiting patients.

Oligonucleotides aptamers as possible therapeutics were scientifically “birthed,” so to speak, nearly 30 years ago, shortly after the “birth” of antisense oligonucleotides for therapeutics. Consequently, on a relative basis, I think it’s telling that my search of ClinicalTrials.gov lists only 28 studies of aptamer drugs compared to 152 studies found for “antisense.” In addition to this difference in total number of studies for these two classes of oligonucleotide drugs, filtering the data by Study Phase gave 7 aptamer studies as Phase 3 (all ocular diseases) compared to 14 antisense studies as Phase 3 (various diseases). The number of FDA-approved or soon-to-be-approved drugs mirrors the same inequality: only one (Macugen) for aptamers and a handful for antisense (see Ionis Pharma, Alnylam Pharma, and Sarepta Therapeutics).

Having said this, I hasten to add that I’m not “anti-aptamers” and instead “pro-antisense.” In fact, I’m “bullish” on both strategies for drug development, and expect more clinical progress with aptamers as new chemistries are pursued. Past focus on 2′-fluoro/2′-O-methyl modified oligonucleotide as aptamers represents, in effect, exploration of very limited structural diversity, which can now be expanded to hydrophobic SOMAmers and thioaptamers, or C5-modified dU X-Aptamers.

Finally, let’s consider the graph shown here, which I constructed using PubMed search results for the number of annual publications indexed to “clinical development of aptamers” as a search phrase. To me, there is clearly a trend toward increased numbers of such publications with time. Factors could arise which negatively impact this trend going forward, but absent that eventuality the future looks promising. 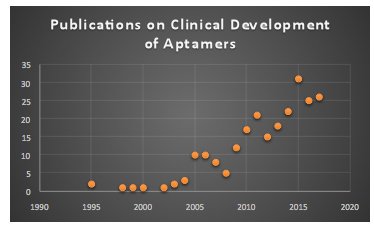 There are additional Active Studies not registered in ClinicalTrials.gov, such as those with NOXXON’s “Spiegelmers,” which are mirror-image L-nucleic acids stable toward nuclease degradation in vivo. NOXXON states that its lead candidate, NOX-A12, which is an L-RNA aptamer, “is under development as a combination therapy for multiple cancer indications 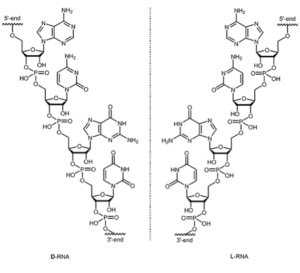 where its impact on the tumor microenvironment is intended to significantly enhance the effectiveness of anti-cancer treatments without adding significant side effects for patients. NOX-A12 is currently in a Phase 1/2 trial in metastatic pancreatic and colorectal cancer patients who are not expected to respond to checkpoint inhibition alone. NOX-A12 has also completed two Phase 2a trials, one in chronic lymphocytic leukemia and the other in in multiple myeloma.”