In 1977, the Nobel Prize in Chemistry was divided among three scientists for their fundamental contributions related to adenosine triphosphate (ATP), which is often referred to as the "molecular unit of currency" of intracellular energy transfer. One half of this prize was jointly awarded to Paul D. Boyer and John E. Walker for their elucidation of the enzymatic mechanism underlying the synthesis of ATP, and the other half was awarded to Jens C. Skou for the first discovery of an ATP-driven ion-transporting enzyme: sodium/potassium-ATPase.

The recent passing of Boyer (June 2, 2018) and Skou (May 28, 2018) is doubly saddening, as well as striking in that both Nobelists died at age 99, and within only five days of each other. In memory of their fundamentally important contributions related to ATP, which is arguably the most important nucleotide for life, this blog provides a brief synopsis of the amazing mechanism by which ATP is produced by ATP synthase, and the equally amazing mechanism by which ATP pumps sodium and potassium ions across cell membranes.

I highly recommend reading Boyer’s historical account and personal perspective on how, alongside his graduate students and postdoctoral fellows, over a span of many years, he concluded that ATP is made by an unusual rotational catalysis of ATP synthase. Boyer’s reflections also explain how an x-ray structure reported by Walker—now an emeritus director of the MRC Mitochondrial Biology Unit in Cambridge—came to play a critical role in establishing this novel mechanism. 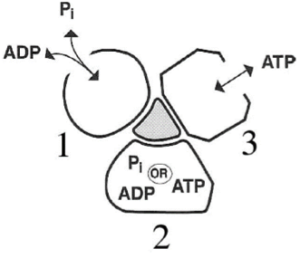 There are three major conformations of catalytic sites (1, 2 and 3) for synthesis of ATP or hydrolysis by ATP. These three sites are depicted here with asymmetric interactions to the central subunit. During catalysis, sites are converted sequentially into three different states, accompanying rotation of the central subunit. The sequence for synthesis is 1 → 2 → 3, while for hydrolysis it is 3 → 2 → 1. Site 1 binds adenosine diphosphate (ADP) better than ATP and is the site at which ADP and inorganic phosphate (Pi) must be present for rapid synthesis to occur. Site 2 has the ability to catalyze chemical transformation and to be present as a form with ADP and Pi present or with ATP present. ATP can be released from Site 3 during synthesis and must be present at this site for rapid hydrolysis.

The rotation of the central subunit is powered, so to speak, by protons. To fully appreciate the wonderous complexity of this “molecular machine”, it’s necessary to consider all of the structural components and the functions ascribed to each. The colorized depiction of membrane-imbedded ATP synthase from E. coli shown below is a useful visual aid for such mechanistic considerations. 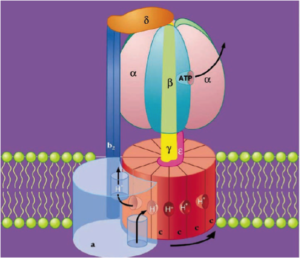 This ATP synthase consists of two regions called F1 and F0. The F1 portion subunits are designated as α3β3γδε and the F0 portion subunits are designated as ab2c9-12. The passage of protons (H+), at the interface of subunit a and the ring of c subunits, causes a rotation of the c subunits and attached ε and γ subunits relative to the rest of the enzyme. The asymmetric γ subunit (yellow and light green) extends through the center of the α3β3 cluster. The b2 and δ subunits serve as a stator, i.e. the stationary part of a rotary system. The rotation of the γ subunit results in sequential conformational changes of the catalytic sites that promote ADP and Pi binding, ATP formation, and ATP release. You can access and read a concise recap of this process written by Boyer at this link in a Nature article titled What makes ATP synthase spin?

I was truly amazed—and totally surprised—by the following facts on ATP, especially the last bullet point: 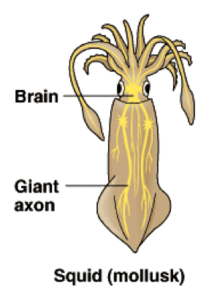 To fully appreciate the scientific story regarding the first discovery of Na/K-ATPase, I recommend reading Skou’s historical account of the circumstances that led him to this achievement. Skou recalls reading a paper that mentioned the presence of an ATP hydrolyzing enzyme in the sheath part of the giant axon of a squid: an ATPase. Knowing then that ATP is the energy source within cells, Skou was intrigued, but he had no access to giant axons and therefore no way of investigating this putative nerve membrane ATPase. He reasoned that crab nerves might be a suitable alternative, so in 1954, he made a deal with a local fisherman to provide him with crabs. He isolated the sciatic nerve from the legs, starting what would become his pioneering discovery.

By 1965, Skou had accumulated enough data to publish a review, summarizing the following properties for the enzyme he named “Na+, K+-ATPase”:

The simplified series of depictions shown below represent the current view of the mechanistic steps for how Na/K-ATPase functions as a sodium-potassium pump. (1) The Na/K pump binds three sodium ions and a molecule of ATP. (2) The splitting of ATP into bound Pi and ADP provides energy to change the shape of the channel, which leads to sodium ions being driven through the channel. (3) The sodium ions are released to the outside of the membrane, and the new shape of the channel allows two potassium ions to bind. (4) Release of Pi allows the channel to revert to its original form, releasing the potassium ions on the inside of the membrane.

In my humble opinion, one of the most gratifying aspects of being a scientist is recognizing that your published investigations will be available for others to learn from after you are no longer among the living. This immortalization, if you will, is what we can collectively think of as our “legacy of literature” that can benefit, in some way, future generations of scientists and other members of society.

The Nobel-worthy contributions by Boyer and Skou on the elucidation of ATP biochemistry are obviously very special examples of this legacy, as reflected in the huge numbers of citations to their publications. I used Google Scholar to find several of the most highly cited articles by each of these Nobelists that you can peruse by clicking the link to each:

By the same token, Walker’s ATP-related legacy of literature can be perused via this link to all of his publications in PubMed. In researching the literature for background and details, I learned a lot about ATP synthase and ATPase biochemistry. Hopefully, you have also found some of this information new and interesting.

Finally, I came across this quote by Paul Boyer expressing his thoughts about being awarded the Nobel Prize after many years of slogging through seemingly endless enzymology; it resonated with me and may also resonate with you:

“The experience reminds me of a favorite saying: Most of the yield from research efforts comes from the coal that is mined while looking for diamonds.” 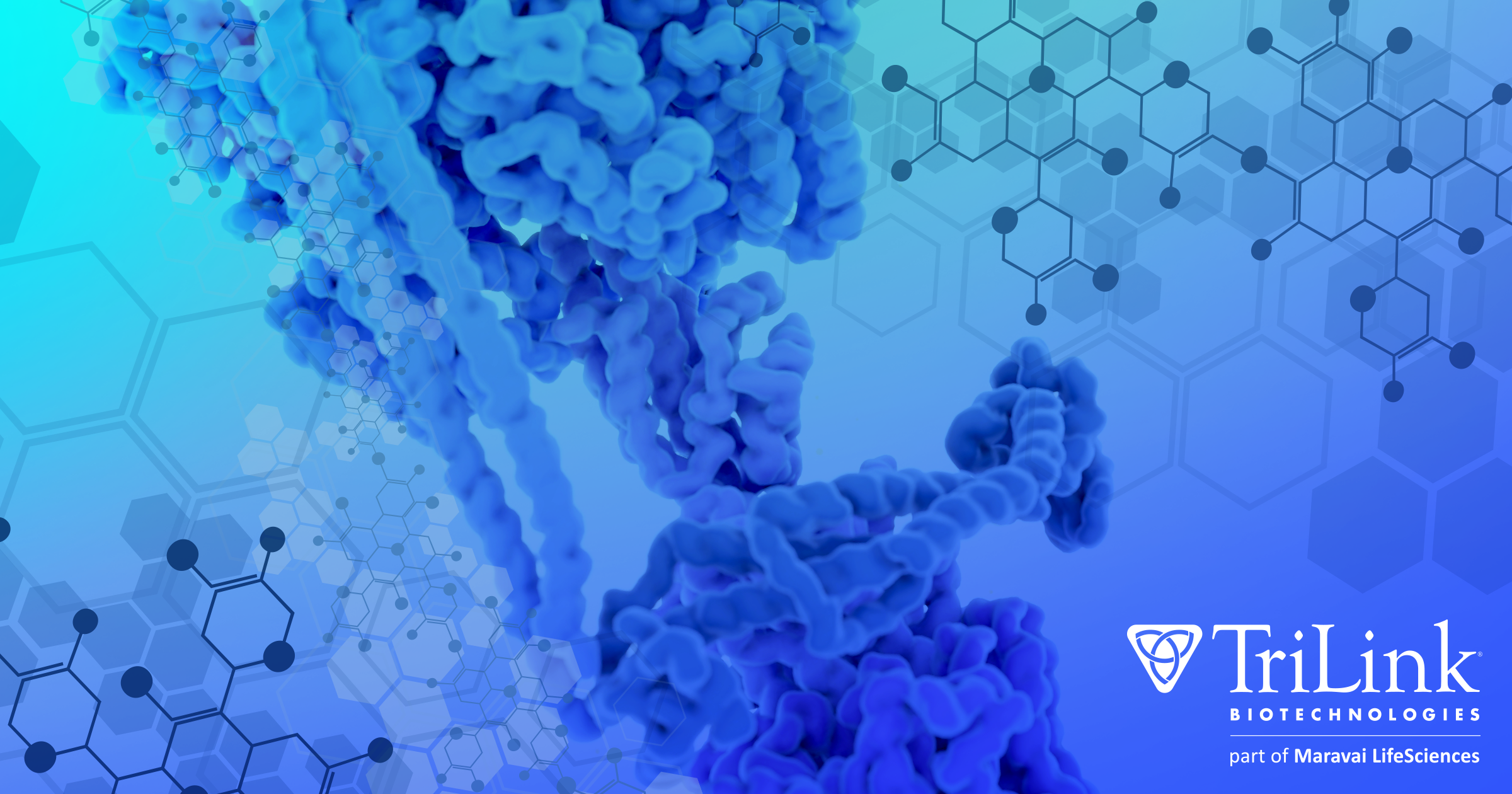