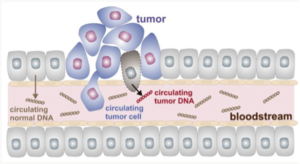 According to the NIH National Cancer Institute website, ~1.6 million persons in the U.S. alone will be diagnosed with cancer this year. A very important key to survival is early detection. To enable significantly earlier diagnosis compared to manifestation of clinical symptoms, researchers have been focusing on finding DNA or RNA biomarkers that are circulating in blood, which is readily available and relatively noninvasive compared to traditional biopsies. 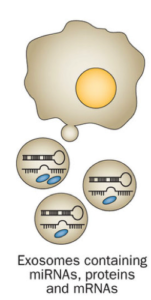 Some of the basic processes underlying this paradigm-shift in cancer diagnostics are depicted in the simplified cartoon wherein tumor cells, or components thereof, pass into the bloodstream. This leads to circulating tumor cells (CTCs) and cell-free circulating tumor DNA (ctDNA) to investigate and differentiate from their normal counterparts as sources of potential biomarkers.

That task is much easier said than done because of the need to sort through all of the normal components in blood, as well as deal with circulating cells and DNA derived from apoptosis (aka programed cell death) and necrosis that are normal ongoing “background” to contend with. In addition to CTCs and ctDNA, there is active cellular excretion of small (30-100 nm) exosome particles as depicted in the following graphic. Consequently, gene-encoding mRNAs, gene-regulating micro RNAs (miRNA), and potentially other exosomal components, can serve as diagnostic biomarkers.

My search of PubMed for publications indexed to “circulating biomarkers” AND “cancer” led to ~9,000 items, the vast majority of which have appeared during the past decade at an accelerating annual rate.  In fact, there were ~1,000 publications in 2014 alone—that’s roughly 3 such publications every day! Those interested in perusing this mountain of information later can use this link, as my intention here is to comment on resultant commercial diagnostic products, each of which provides all-important early diagnosis using a simple blood test, or urine or stool.

In one of my blogs last year, I asserted that liquid biopsies were (metaphorically) clinically valuable “liquid gold” in a modern day Gold Rush. My evidence for the “rush” was a then recent review in Clinical Chemistry stating that “the detection and molecular characterization of CTCs are one of the most active areas of translational cancer research, with >400 clinical studies having included CTCs as a biomarker.” In that vein—double pun intended—who’s struck it rich, so to speak, commercially? 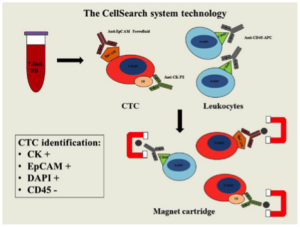 The answer is Veridex, which developed the CELLSEARCH® CTC Test that has the added distinction of being the first FDA-approved in vitro diagnostic (IVD) test for capturing and counting CTCs to determine the prognosis of patients (in this case for metastatic breast, colorectal or prostate cancer). This test utilizes magnetic capture of cancer-specific antibodies as depicted below.  Veridex was subsequently acquired by Jansen Diagnostics, which now offers a complete system for CELLSEARCH® CTC Test comprising sample collection, sample preparation, and sample analysis using unique immuno-magnetic and fluorescence imaging technology.

In addition, a Swiss molecular diagnostics company, Novigenix, offers its blood tests for early detection of cancer. Colox®, its lead product, is designed to significantly reduce mortality from colorectal cancer through early detection and follow-up colonoscopy. Novigenix’s technology is based on predictive gene expression profiles of circulating blood cells and tumor-derived protein markers. 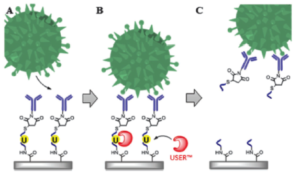 Although not yet a diagnostic device, Prof. Steven Soper at UNC-Chapel Hill and a team of coworkers have recently published methods whereby captured CTCs can be enzymatically released for further analysis. This release procedure (depicted right) features use of an oligonucleotide linker containing uracil (U) that is cleaved by USER™, which consists of a mixture of uracil DNA glycosylase and DNA glycosylase-lyase endonuclease VIII.

That ctDNA can provide promising biomarkers for noninvasive assessment of cancer has been successfully translated into a commercial product by Trovagene, which tests for ctDNA in urine or blood, and claims to have been the first company to have recognized the diagnostic value of ctDNA.

In addition, Cologuard® (developed by Exact Sciences in Madison, WI) was approved by the FDA as the first stool-based colorectal screening test that detects red blood cells and DNA mutations that may indicate colon cancer or precursors to cancer. Its commercials are frequently seen on TV. Given the inconvenient colon-cleansing required of patients prior to the also unpleasant invasiveness of colonoscopy, it’s not surprising that more and more persons are opting to use this new test.

In fact, Exact Sciences recently reported that during the first quarter of 2016, the company completed approximately 40,000 Cologuard® tests, an increase of more than 260% compared to approximately 11,000 tests completed in the same quarter of 2015. The cumulative number of physicians ordering Cologuard® since launch expanded to more than 32,000. Finding a doctor is relatively easy, as I found out when I located a gastrointestinal (GI) specialist near me who was also in my network—yeh!

Given the high incidence rate of colon cancer, and the traditionally recommended screening process, it was necessary for Exact Sciences to obtain compelling data in a large clinical study. An FDA announcement stated that the safety and effectiveness of Cologuard® was established in a clinical trial that screened 10,023 subjects. The trial compared the performance of Cologuard® to the fecal immunochemical test (FIT), a commonly used non-invasive screening test that detects blood in the stool. Cologuard® accurately detected cancers and advanced adenomas more often than the FIT test.

PlasmaSelect-R™ offered by Personal Genomics Diagnostics, which is a service company founded by experts at Johns Hopkins University, analyzes ctDNA in blood for genetic alterations in cancer based on a targeted panel of 63 well-characterized cancer genes. Cell-free DNA is extracted from plasma using proprietary methods for low-abundance sample DNA, and processed using a proprietary capture process for high-coverage next-generation sequencing to allow tumor specific mutations, amplifications, and translocations to be identified with a high sensitivity (allele fractions as low as 0.10%) and specificity. The company states that its “services further the understanding of cancer and facilitate the development of new diagnostics and therapeutics through our pioneering research approaches and novel technologies.”

In June 2016, Roche announced that the FDA approved the cobas® EGFR Mutation Test v2 for use with plasma samples, as a companion diagnostic for the non-small cell lung cancer (NSCLC) therapy, Tarceva®. It’s important to recognize that this is the first FDA approval of a liquid biopsy test as an aid in clinical decisions, and makes it the only companion diagnostic that is FDA-approved for the detection of the epidermal growth factor receptor (EGFR) gene in tumor DNA derived from plasma (or tumor tissue). NSCLC patients who have EGFR exon 19 deletions or L858R mutations are candidates for the EGFR-targeted therapy Tarceva® (erlotinib) in first-line treatment.

The discoveries in 1999-2000 of tumor-derived RNA in the blood of cancer patients sparked a new field for studying gene expression noninvasively using quantitative reverse transcription-PCR (qRT-PCR) and then next-generation sequencing. The existence of circulating RNA was surprising because ribonucleases are present in blood. However, mechanisms that protect circulating RNA reportedly include complexation to lipids, proteins, lipoproteins, or nucleosomes, and protection within apoptotic bodies or other vesicular structures.

Cleverly named Molecular Stethoscope is a newish startup co-founded by uber-famous Drs. Stephen Quake and Eric Topol. The company has leveraged Quake’s finding that genome-wide analysis of circulating RNA shows tissue-specific signatures from all of the major organs can be monitored in blood, and Topol’s finding that such signatures can be used to predict imminent occurrence of a heart attack. Coronary artery disease, neurodegenerative diseases, and autoimmune/inflammatory diseases are the company’s current objectives. I’m guessing, however, that cancer might be added or licensed.

My search of the literature indicates that there are far more publications on circulating miRNA, presumably due to its greater abundance resulting from its small size and/or binding to miRNA-related proteins. The biogenesis of miRNA is depicted below. 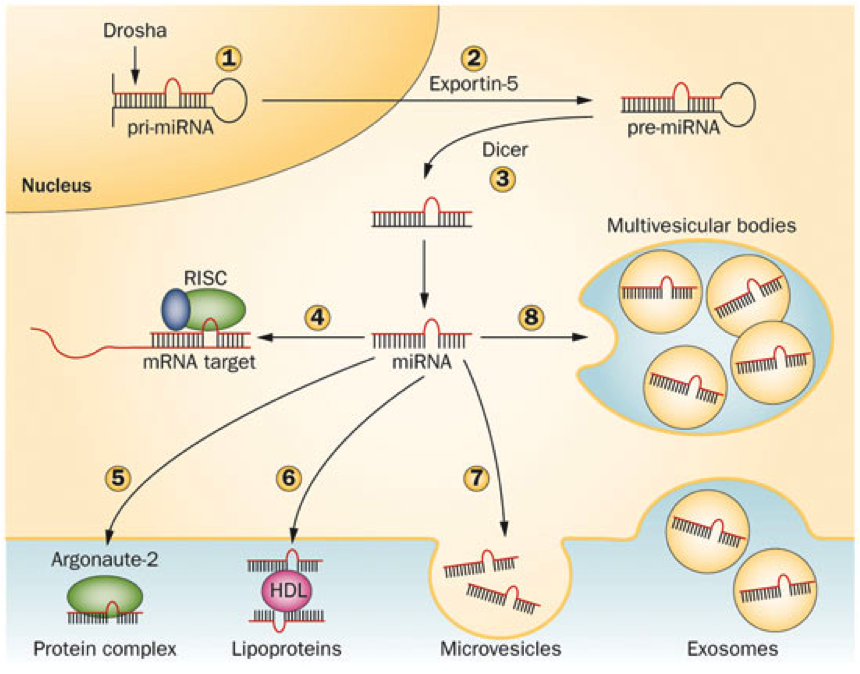 A review and prospectus for circulating miRNA applied to cancer has been recently published by Bertoli et al. in an article entitled MicroRNAs: New Biomarkers for Diagnosis, Prognosis, Therapy Prediction and Therapeutic Tools for Breast Cancer. From my search of this emerging field, some exemplary commercial endeavors are as follows.

The first blood-based cancer diagnostic to exploit exosomes became commercially available in the U.S. in January 2016 via launch of ExoDx Prostate(IntelliScore) by Cambridge, MA-based Exosome Diagnostics. As reported by a large team of medical experts in JAMA Oncology, qRT-PCR was used to compare the urine exosome 3-gene expression with biopsy outcomes in patients with a range of low-to-high prostate-specific antigen (PSA) levels (2 to20 ng/mL). 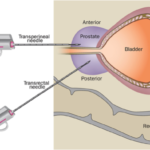 The investigators concluded that this qRT-PCR assay using urine was associated with improved identification of patients with higher-grade prostate cancer among men with elevated PSA levels and could reduce the total number of unnecessary biopsies from the ~1M total annual biopsies. The complications that have been associated with unnecessary biopsy and overtreatment range from erectile dysfunction and incontinence, to infections, sepsis and serious cardiovascular events.

At the other end of the commercial spectrum, so to speak, startup Miroculus aims to aid in the early diagnosis of cancer by making a low-cost, open-source, decentralized diagnostic they called Miriam pictured below. Their goal is for untrained workers in clinics around the world to be able to use Miriam to screen for cancer. 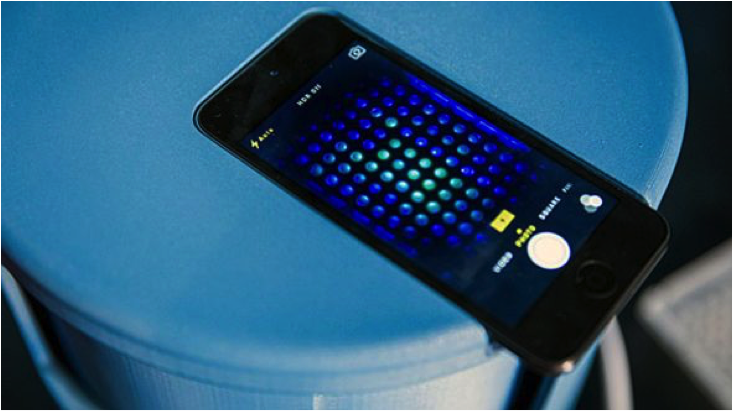 Miriam made its—or more gender specific—her public debut at the TEDGlobal conference in Rio De Janeiro in 2014 with TED curator Chris Anderson calling it ‘one of the most thrilling demos in TED history’, according to Miroculus. To see and hear why this opinion is accurate, and how Miriam will work in concert with a smartphone camera and cloud interface, I urge you to check out the ~11 minute TEDGlobal presentation at this link, which also gives a short, layperson introduction to miRNA biomarkers in blood for cancer. 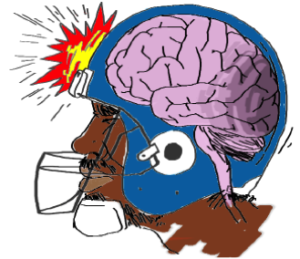 Although this post focuses on nucleic acids, it’s worth noting that protein biomarkers in blood are also being investigated. In view of increased awareness and media attention about concussion injuries in the National Football League (NFL), a timely example of protein biomarkers for diagnosis of chronic traumatic encephalopathy (CTE)—which heretofore has not been possible by any test—is in development.

Currently the only way to diagnose CTE is through a post-mortem autopsy, but Aethlon Medical Inc. intends to change that with the diagnostic test being developed by its subsidiary Exosome Sciences. The test being studied is designed to identify an abnormal protein called tau that builds up in brain tissue as a result of repetitive head trauma. CTE researchers believe that they have developed a means of measuring plasma exosomal tau. Researchers thought that exosomes had potential as a means of identifying CTE because they cross the blood-brain barrier and can provide a unique method of measuring certain aspects of the contents of brain cells through a blood test.

Exosome Science was able to use its diagnostic blood test in 78 NFL players with histories of concussions, as well as in a control group made up of 16 athletes involved in non-contact sports. The subjects are all part of a much larger NIH-funded project called DETECT, which is focused on developing a variety of biomarkers for CTE and involves researchers at Boston University School of Medicine and the University of Washington.