While it’s normal for everyone to occasionally feel blue or sad, prolonged bouts of depression that interfere with normal life are indicative of a serious mental health issue. While there are numerous forms and differing severity of depressive disorders, as described at a National Institute of Mental Health (NIMH) website, only two factual aspects of this illness really stand out in my opinion:

Fortunately, as you’ll read below, easily measured gene expression-based biomarkers present in conventional blood-draw samples have been recently found to differentiate depressed from normal subjects. Not surprisingly, the academic inventor has filed a patent that—if successfully commercialized—will significantly add to the “biomarker bonanza” that I’ve commented on previously.

Brief Background on Biomarkers for Depression

The search for biomarkers for depression is definitely not new and, in a review of biomarkers for psychiatric diseases, has been traced back more than a century ago to the work of Aloysius Alzheimer in 1901. As a psychiatrist and a neuropathologist, Alzheimer worked with a 51-year-old patient suffering from dementia. Over the next 5 years, he observed her behavior. When she died, he studied her brain, paying particular attention to the senile plaques and neurofibrillary tangles that were present. Alzheimer ultimately discovered the connection between these "biomarkers" and the symptoms the disease that now bears his name.

In recent years, the search for psychiatry-relevant biomarkers of MDD, schizophrenia, bipolar disease, and other important psychiatric/neuropsychiatric disorders has intensified. Searching PubMed Central provided ~1,500 references, from which I selected the following recent examples to give you a flavor of the diversity of technologies being used. These are mostly used in relation to MDD, which is expected to become the most prevalent and costly disease worldwide by 2030. A very depressing thought (bad pun intended)…

A review by Schmidt et al. emphasizes the large number of “key growth factors, cytokines, hormones, and metabolic markers that could be included in an initial multi-analyte biomarker panel of MDD.” With so many genes to consider, it was only a matter of time before genome-wide microarray (aka “gene chip”) profiling would be applied to discover a panel of candidate genes. However, the way this was done seems very interesting to me. 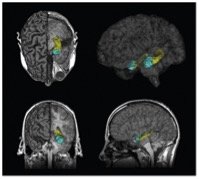 Magnetic Resonance Imaging (MRI) images of hippocampus (yellow) and amygdala (blue), which are symmetrically located in both lobes of the brain (upper right); taken from Butterworth et al. via Bing Images. Read here about these brain regions as related to depression.

A team led by professor Eva E. Redei at the Department of Psychiatry and Behavioral Sciences, Northwestern University in Chicago used established “endogenous depression and chronic stress models,” as detailed here, in both male and female rats in various rat species to simulate human genetic diversity. Brain regions were dissected immediately after decapitation, and individual samples of hippocampus and amygdala (see picture right) were homogenized for RNA isolation and then RT-PCR. Resultant cDNA was hybridized onto GeneChip® Rat Genome 230 2.0 Arrays (Affymetrix), each of which are comprised of >31,000 probe sets that analyze >30,000 transcripts and variants from >28,000 well-substantiated rat genes.

Statistical analyses were used to determine panels of genes that serve as candidate biomarkers; however, it was then necessary to investigate whether these rat-derived candidates correlate with human depressive illness. The results of this scientifically big leap, if you will, from artificially stressed rats to actual human patients with MDD were published by Redei and coworkers late last year in Translational Psychiatry. Basically, a panel of 20 genes was studied by RT-PCR of blood samples from 32 MDD patients (age range 23–83)—before (i.e. baseline) and after 18 weeks of cognitive behavioral therapy (CBT)—and 32 non-depressed (ND) control individuals.

Salient findings are as follows:

Eva E. Redei in an interview by Chicago Tonight (taken from Bing Images).

By watching a short video of professor Redei in a posted statement by Northwestern University, you can listen to her comments about these findings, and get a sense of her strong convictions that energized this long, 16-year pursuit of blood biomarkers for depression. She is quoted therein as saying “[t>

his clearly indicates that you can have a blood-based laboratory test for depression, providing a scientific diagnosis in the same way someone is diagnosed with high blood pressure or high cholesterol.”

While the above quote is very positive, accepted use of these blood biomarkers for MDD will require much more work. In fact, the published report by Redei et al. has the following concluding statement:

To get more specifics about this statement, I contacted professor Redei by email and asked the following questions to which her replies are given:

JZ: What is the approximate size of a “larger patient population” for MDD biomarker validation that you refer to?

ER: We would like to enroll 100 well-characterized patients with major depression and 100 controls (no depression or other psychiatric illnesses).

JZ: If such a study began patient enrollment at the beginning of 2015, and the results were positive, in roughly what time-frame could FDA approval as a diagnostic be expected if all went well?

ER: As you know, FDA approval process and time is difficult to predict. However, as it is an in vitro non-invasive diagnostic, it would receive expedited review. I believe that the end of 2016 is a possibility.

JZ: Specifically, what other psychiatric illnesses

ER: Bipolar disease is the number one on the list.

Hopefully, this larger clinical study will begin soon and provide results warranting expedited review and approval by the FDA. My guess is that a commercial entity aiming to market MDD biomarkers as a diagnostic product will be the sponsor of this future clinical study. That entity could be either a startup or existing firm, with patent licensing from Northwestern University. Like many academic and research institute investigators seeking patent protection—and commercial profits—professor Redei has filed a patent application related to the aforementioned blood biomarkers for depressive diseases. If a patent is issued, and if the larger, definitive clinical trial indeed validates the diagnostic utility of these biomarkers, the intellectual property would almost certainly have huge commercial value.

If you are feeling depressed, and don’t exercise regularly, you should definitely go to the gym or start jogging or take long walks as a means of combatting the “blues”—as well as build-up muscles and burn-off calories. Many societies through the ages have adopted physical exercise in one form or another as a means of ensuring physical and mental well-being, although scientific evidence to support the latter has been somewhat controversial. Some researchers have concluded that there is evidence to suggest that exercise may be a neglected intervention in mental health care. Others have concluded that there is still a long way to go in clinical randomized control trials to prove the point.

Now, a team led by investigators at the Karolinska Institute in Stockholm has published the first strong evidence—in my opinion—for a molecular biological pathway underlying exercise and resistance to depression. In a nutshell, comparisons of “muscle mice” with normal mice revealed activation of skeletal muscle expression of enzymes that convert kynurenine aminotransferases (KAT) that convert kynurenine into kynurenic acid, a metabolite unable to cross the blood-brain barrier. Reducing plasma kynurenine protects the brain from stress-induced changes associated with depression. Importantly, elevated KAT was also found for a group of human volunteers following a 3-week training program.

‘The big thing is to show that by changing something in the periphery of your body, in muscle, you can affect function in the brain. That was the big novelty of the paper,’ said one of the lead investigators in a BioTechniques interview.

When I used the expression “feel blue” to begin this post about biomarkers for depression, it occurred to me that I had no clue about the origin of this commonly used phrase. Since I couldn’t find it in the Online Etymology Dictionary, I resorted to searching the web, and found an interesting discussion-thread debating various origins. Looking into that, I found this interesting—to me—origin of the phrase “feeling blue” at English Language & Usage citing Origins of Navy Terminology:

If you are sad and describe yourself as "feeling blue," you are using a phrase coined from a custom among many old deepwater sailing ships. If the ship lost the captain or any of the officers during its voyage, she would fly blue flags and have a blue band painted along her entire hull when returning to home port.

The clipper ship Blue Jacket, an 1854 extreme clipper in the Liverpool and Australia trades—named after the blue jackets, a traditional name for sailors in the US and British navies—was lost at sea in 1869 when flax it carried caught fire, according to nine survivors who managed to save 15,000 pounds sterling of gold (taken from vickeryart.com via Bing Images).