This post comes only two days after National DNA Day 2015 on April 25th so it’s apropos to feature DNA, but I’d also like to give a nod to the lesser recognized RNA, without which DNA would be akin to music notes in search of a melody.  If you’re a regular reader of this blog, you know my stance on this subject and so I digress…

So-called “Click Chemistry” is trending so “hot” that it has led to a phenomenon known as verbification, which is when a noun becomes a verb by virtue of popularity and linguistic convenience. So, just as Google has become to google for virtually everyone, Click has become to click for synthetic chemists and biotechnologists. Whether or not you’re already familiar with Clicking, I hope to provide herein some interesting snippets about Click, its growing ubiquity, and how it has enabled synthesis of a completely novel, non-phosphorous linkage in DNA that nevertheless functions flawlessly in vivo—a stunning feat never before achieved that has intriguing implications about life. More on that later, but first some snippets about Click.

The essential basis of “Click Chemistry” goes back to the early 1960s when Rolf Huisgen at the University of Munich published a series of papers demonstrating reactions of azides with alkynes to give cyclic triazoles, as shown below. In chemistry parlance, these were examples of a “1,3-dipolar cycloaddition,” and were soon eponymously named the “Huisgen reaction,” which I can still recall from chemistry lectures during my graduate studies way back when, giving testimony to both my age and—thankfully—long-term memory that still functioning, but I digress (again)…

Fast forward 40 years to the early 2000s when K. Barry Sharpless at The Scripps Research Institute in San Diego introduced the term "Click Chemistry" to describe an important variant of the Huisgen reaction wherein copper ion is used to catalyze the rate of reaction making it possible to use mild conditions to chemically join, i.e. conjugate, a wide variety of azides and alkynes.

In my opinion, the growing ubiquity of Clicking is evident from the number of publications that I found in SciFinder® by searching for the term “Click Chemistry” which gave over 11,300 items. That computes to an astounding 870 publications per year or 2-3 publications per day! Of these, there were nearly 700 patents, which attests to significant potential commercial value.

Aside from these impressive numbers, Clicking is mostly used for labeling DNA and RNA, as exemplified below.

Beyond Labeling to Life

To me, the most exciting applications of Clicking have been published by Tom Brown, who I have enjoyed knowing personally for many years, and who has recently moved his research team from the University of Southampton to the University of Oxford, UK, where he is Professor of Nucleic Acid Chemistry in the Department of Chemistry.

Although his published work on Clicking first appear only about 7 years ago, Tom and his team have since then reported an amazing 44 Click-related publications. Notable among these are use of ring strain-promoted strategies, which obviate the need for potentially problematic copper ion, and Click ligation of RNA to synthesize ribozymes that are not accessible by enzymatic ligation.

Absolutely unexpectedly—in my opinion—Brown’s team has discovered that Clicking together 3’-alkyne and 5’-azido DNA fragments to obtain triazole linkages of type depicted below in blue are faithfully transcribed in vivo despite the absence of a natural, negatively charged phosphodiester moiety! This completely contradicts our collective conceptual dogma of the evolutionarily-derived sensitivity of DNA polymerases toward DNA template structure.

I’m particularly fascinated by these findings because they further exemplify non-classical forms of DNA/RNA that nevertheless are capable of one or more of the basic life processes, namely, replication, transcription and translation, which I’ve commented on previously. Whereas these earlier blogs highlighted either replication of modified DNA bases or translation of modified RNA bases, the following work by Brown’s team demonstrates transcription of non-phosphorus triazole linkages in DNA.

In one example, a triazole mimic of a DNA linkage was Clicked into two locations within a 300-mer fragment of DNA that was then shown to undergo errorless PCR amplification using various polymerases and normal dNTPs. They next investigated the biocompatibility of triazole-linked DNA within the cellular machinery of E. coli by insertion into a plasmid having ß-lactamase (BLA), as depicted below in Fig. 5 taken from their publication. The plasmid grew and functioned with essentially the same efficiency as the wild-type plasmid, and a control experiment proved that DNA repair processes did not excise and replace these triazole linkages with wild-type linkages.

Biocompatibility of these Clicked triazole-DNA linkages with transcription in a human cell line was subsequently demonstrated by Brown’s team using a Click-linked gene encoding the fluorescent protein mCherry. After cell growth and monitoring mCherry fluorescence (i.e. protein function), mRNA was isolated and reverse transcribed into mCherry cDNA that was shown by sequencing to be error-free. The authors noted that “this is the first example of a non-natural DNA linker being functional in a eukaryotic cell.”

In closing this section, I think it’s fair to say that the above mentioned findings by Brown’s team support the possibility of Click-based chemical evolution of life forms having non-phosphorus DNA or RNA linkages either in the past or the future, along the lines I’ve commented on previously in Back to the Future with RNA and XNA. It’s also worth musing over the fact that Friedrich Miescher initially discovered DNA based on it containing a large proportion of phosphorus, while Tom Brown discovered a new form of DNA that functions without phosphorus! Bizarre. 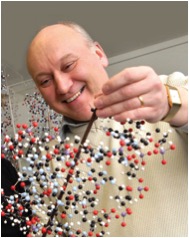 In addition to all of the aforementioned creative contributions to Click chemistry of DNA and RNA, Tom Brown’s energy and entrepreneurial talent has been recognized by being awarded the 2014 Chemistry World Entrepreneur of the Year, based on having started three successful biotech companies.

In a lengthy story by Sarah Houlton, Brown talks about how tough times for getting grants in the 1990s led him to do a deal with the Wellcome Trust to transform his Trust-funded DNA synthesis core lab into a commercial venture managed by his wife, Dorcas, a PhD biologist. This new company called Oswel—coming from oligonucleotide synthesis and Wellcome—became profitable and was eventually acquired by Eurogentec.

The Browns decided to try to repeat this performance by using their personal money to start ATDBio in Southampton as an oligonucleotide supply company in 2005, and used its profits to support R&D that continues today in a second facility in Oxford.

At about the same time ATDBio started up, Brown decided to be the sole investor in University of Southampton virologist Rob Powell’s PCR-based diagnostics start-up named Primer Design, which now has about 30 employees in Southampton, and sells kits worldwide for a whole host of applications.

I congratulated Tom on the occasion of his receiving this award, and asked him what’s next? He replied that “[t>

he companies are doing well and realistically my current focus is more than ever on academic research—starting new initiatives in Oxford on diagnostic and therapeutic aspects of nucleic acid chemistry, with a long-term hope that my research will lead on to important applications.”

I strongly suspect new and important applications will indeed be found by Tom.

What do you think about DNA and RNA Clicking?