As you know, I like to explore all things related to nucleic acids. In this post, I take a little respite from scientific analysis and instead explore an interesting real-life application for DNA testing. As summer comes to an end and we’ve all returned from our recent holidays, this post provides a tie-in to Naples, which is both a great vacation destination and a place where dog-droppings are a controversial topic. Sound intriguing? Read on.

Naples' historic city center, which is listed by UNESCO as a World Heritage Site, is the largest in Europe, covering 4,200 acres and enclosing 27 centuries (!) of history. This historic city is leading the way in employing modern technology to keep its streets clean. Naples is the first metropolitan city to use “CSI-style” DNA forensics to rid its sidewalks of dog poop and impose stiff fines to those who let Fido leave his DNA behind. It’s a story that strangely juxtaposes quaint European old-city charm with an interesting mix of science and societal topics to evoke a wide spectrum of opinions.

By the way, in researching Naples, I learned that it has long been a major cultural center with a global sphere of influence, particularly during the Renaissance and Enlightenment eras. In the immediate vicinity of Naples are numerous culturally and historically significant sites, including the Palace of Caserta and the Roman ruins of Pompeii and Herculaneum. Naples is synonymous with pizza, which originated in the city as Neapolitan flatbread and migrated to America with the Italians. Neapolitan music has furthermore been highly influential, credited with the invention of the romantic guitar and the mandolin, as well as notable contributions to opera.

Good Idea or Waste of a City’s Resources?

Despite its glorious past, the city is not without it’s slew of current problems. Tommaso Sodano, the vice mayor of Naples, recently acknowledged in an interview that the city is facing many challenges related to huge debt, unfunded service agencies, wide-spread organized crime and general filth related to illegal dumps and dog droppings…yes, poop.

The city administration is positioning Naples ‘at the cutting edge of dog-waste eradication’. The initiative takes DNA samples of dogs to create a database used to identify and fine owners who leave their dog’s poop on city streets.

“I know some people find it funny,” Mr. Sodano is quoted as saying, smiling, “that with all the problems the city has, we would focus on dog poop. I know that.” 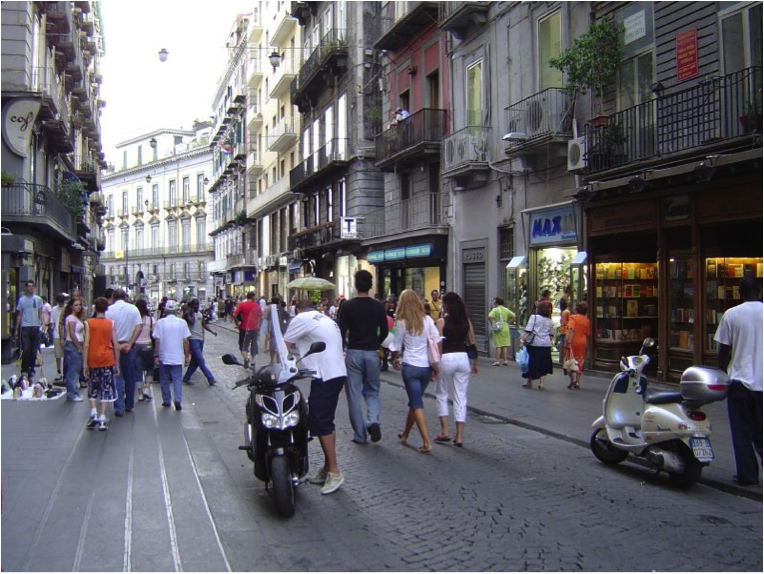 While it may sound a bit humerous at first, it’s an issue that is wide-spread and difficult to control as there are some 80,000 dogs in Naples. While other cities have tried everything from mailing dog poop back to its owner to publicly shaming offenders, Naples is pursuing a more modern approach. Blood samples will be taken from every dog in the city and used to create a database matched with contact information for the dog’s owner. ‘When an offending pile is discovered, it will be scraped up and subjected to DNA testing. If a match is made in the database, the owner will face a fine of up to 500 euros, or about $685.’ The program is in its infancy, but officials say it’s already making an impact on Via Toledo and surrounding areas where it’s being piloted. 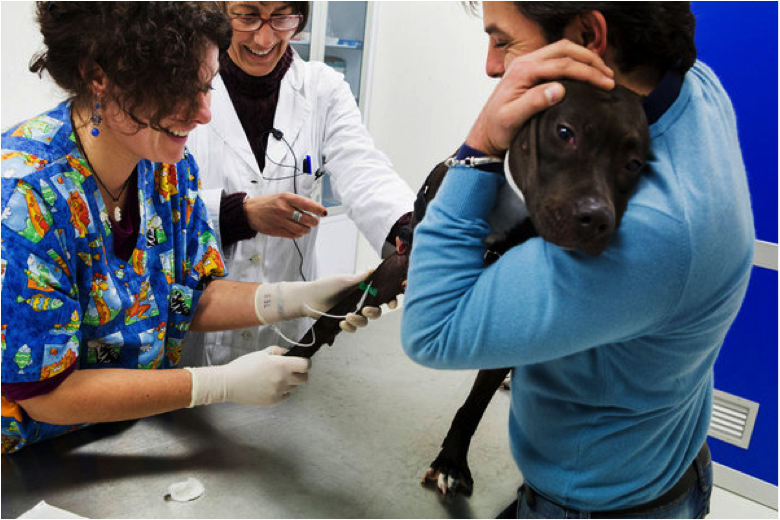 Veterinary workers in Naples drew blood from Fiona, a pit bull, for the DNA database. Credit Gianni Cipriano for the NY Times.

Many residents and officials are skeptical that the program will work given the city’s existing challenges with basic services like garbage collection and sewage. Others disagree with the program’s expenditures in light of the city’s mounting debt. Sodano remains committed to the program saying “The main goal is respect for the rules.” He’s quick to add that other mounting issues shouldn’t prevent city administration from keeping Naples beautiful. “Governing Naples,” he said, “certainly requires a sparkle of madness.”

I tried, unsuccessfully, to find out what DNA-based identity testing is being used in Naples. In researching this, however, I did find the abstract of a relatively recent publication that suggests to me that Naples may be analyzing mitochondrial DNA (mtDNA), analogous to TriLink’s forensic products (mitoPrimers™) for human identity testing using PCR-sequencing.

According to this abstract, the researchers sequenced the entire ∼16 kb canine mtDNA genome of 100 unrelated domestic dogs (Canis lupus familiaris) and compared these to 246 published sequences to assess hypervariable region I (HVI) haplotype frequencies. They then used all available sequences to identify informative single nucleotide polymorphisms (SNPs) outside of the control region sequence—identical in all dogs—for use in further resolving mtDNA haplotypes corresponding to common HVI haplotypes. They identified a total of 71 informative SNPs that they concluded are “useful forensic tools to further resolve the identity of individual dogs from mitochondrial DNA (mtDNA).”

Even though we don’t know the exact details of the testing being used in Naples, I wrote this post because I find the practical applications of DNA-based testing to be fascinating. If you know of other real-life applications, please share them in the comments section below.