Truth be told, what led me to writing this post was suddenly realizing one day that, although the vast majority of my professional career involves nucleic acids—and DNA in particular—I did not know anything about the discovery of DNA or its naming. My follow-on thoughts were that this was somewhat embarrassing for a blogger focused on nucleic acids, and should be remedied by some homework! This is also good timing since my mind is currently aflutter with all things DNA in anticipation of National DNA Day coming up on April 25. In the event that you recall my past commentary about the bias toward DNA, yes I am still supporting a National RNA Day to balance the ranks, but I digress…

In doing my so-called homework, I learned about Swiss scientist Friedrich Miescher’s life story and circumstances surrounding his discovery in the late 1860s of new matter that he named nuclein, which eventually became incorporated into the term nucleic acid. Those circumstances, including Miescher’s unusual source of nuclein, were quite interesting to me so I thought they’d be worth sharing in this post, which draws upon a lengthy article by Ralf Dahm, who has written extensively about Miescher, and has a website worth visiting.

Friedrich Miescher, who was born in Switzerland and graduated from Basel University’s Medical School, moved to Tübingen, Germany in 1868 to be trained as a scientist, specifically to study the chemical constituents of cells. He had been inspired to do so by his uncle, Wilhelm His (1831-1904), an eminent physician and professor in Basel, who discovered neuroblasts and coined the term dendrite.

It was His’ conviction that the key to fundamental questions in biology lay in the chemistry of cells and tissues, and Miescher—who had little interest in becoming a physician—was easily persuaded by his uncle to study these questions.

In his first semester at Tübingen, Miescher worked with Adolf Strecker (1822-1871), a leading organic chemist at the time and renown for being the first person to synthesize an amino acid (alanine) in a reaction known today as the Strecker synthesis.

Tübingen castle where Miescher worked in Hoppe-Seyler’s laboratory (pictured below) dates back to 1078. Image taken from tübingen.de via Google Images.

But Miescher was not so interested in organic chemistry as such, and was instead keen to apply his newly acquired knowledge to explore the chemistry of cells and tissues. So, in autumn 1868, Miescher joined the laboratory of biochemist Felix Hoppe-Seyler (1825-1895), who was one of the pioneers of what was then referred to as physiological chemistry—a new field aiming to unravel the biochemistry of life. Hoppe-Seyler did seminal work on the properties of proteins—notably hemoglobin, which he named—and introduced the term proteid that later became protein.

Photograph of Hoppe-Seyler’s laboratory in Tübingen castle taken in 1879 where Miescher discovered DNA ten years earlier. The large distillation apparatus provided distilled water. Prior to being made into a laboratory, the room was used as the laundry for the castle. (taken from Dahm)

The Discovery of DNA

I’m fascinated by reading about the discovery of DNA by Miescher in his own words:

“I had set myself the task of elucidating the constitution of lymphoid cells. I was captivated by the thought of tracking down the basic prerequisites of cellular life on the simplest and most independent form of animal cell.”

He tried to isolate the cells from lymph glands, but found that gave small quantities of low purity, so he switched to leukocytes (aka white blood cells) as his model system, partly because they have relatively large nuclei that he wanted to study. The other reason was availability: this cell type was readily available to him from the local surgical clinic in the form of pus from fresh surgical bandages. According to a book about Miescher, these were in plentiful supply from hospitalization of wounded soldiers from a war in Crimea—which, unfortunately, happens to again be a war-like region currently in the news and referred to as the “Ukraine crisis.”

Once again in Miescher’s own words: 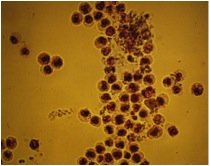 Leukocyte clusters in pus stained with Toluidine (taken from agora.crosemont.qc.ca via Bing Images).

“I was faced with the task of determining, as completely as possible, the chemical building blocks whose diversity and arrangement determines the structure of the cell. For this purpose pus is one of the best materials.”

To begin, Miescher had to develop methods to wash leukocytes and separate the protoplasm from nuclei in order to analyze their constituents. He tested various salt solutions, always checking the outcome of his trials under a microscope—“a very time-consuming task,” Miescher wrote.

After he had an alkaline solution those constituents and then neutralized it, he wrote:

“…I could obtain precipitates that could not be dissolved either in water, acetic acid, very dilute hydrochloric acid, or in solutions of sodium chloride, and which thus could not belong to any of the hitherto known proteins.”

Unknowingly, Miescher had for the first time, obtained a crude precipitate of DNA that he called nuclein.

He eventually developed a protocol for isolating nuclein in sufficient quantity and purity, and then set about determining its elemental composition. Elemental analysis was one of the few methods available then to characterize novel substances.

“I have tried to detect the essential peculiarities in [nuclein’s>

elementary composition, as best the sparse material at my disposal would allow me to.”

In addition to revealing carbon, hydrogen, oxygen, and nitrogen, he measured a large proportion of organic phosphorus—not inorganic phosphate—in ratios relative to the other elements that differentiated nuclein from any known protein.

Following up on his discovery of nuclein in leukocytes, Miescher examined other tissues and cell types, such as liver, testes, kidney, and yeast cells, and found nuclein there too. Self-confidently, he speculated that, upon further investigation,

entire family of such phosphorus-containing substances, which differ slightly from one another, will reveal itself, and that this family of nuclein bodies will prove tantamount in importance to proteins.”

However, there’s an interesting twist—pun intended—in this story of DNA’s discovery!

Miescher completed his discovery and initial characterization of nuclein in autumn 1869, and began writing up his first-ever scientific publication, finishing the manuscript on December 23, 1869.

However, Hoppe-Seyler was skeptical of Miescher’s data and wanted to repeat the experiments for himself before consenting to their publication. This caution by Hoppe-Seyler was the result of an earlier controversy in his lab regarding a phosphorus-containing compound unrelated to nuclein.

In early 1871, Miescher’s manuscript entitled—as translated to English from German—“On the Chemical Composition of Pus Cells” was included as the first paper in an issue of a journal published by Hoppe-Seyler. It also had a paper on nuclein by another student of Hoppe-Seyler, and an article by Hoppe-Seyler in which he confirmed Miescher’s findings on nuclein, including its unusually high phosphorus content.

Miescher was confident about the importance of his discovery. He stated that the new substance he had discovered would prove to be of equal importance to proteins. Concluding his publication he wrote:

“This is how far I have come based on the material at my disposal. It is obvious that elementary analyses apart, a number of simple and obvious experiments are missing, which would likely give essential information on the relationship between nuclein and the other hitherto known groups [of molecules>

. I myself will, as soon as possible, report further news. However, I believe that the given results, albeit fragmentary, are significant enough to invite others, in particular chemists, to further investigate the matter. Knowledge of the relationship between nuclear substances, proteins and other closest conversion products will gradually help to lift the veil which still utterly conceals inner processes of cell growth.”

Notable subsequent contributions to collectively “lift that veil” include:

For those of you who would like to know much more about the life and scientific contributions of Friedrich Miescher, I suggest Kathleen Tracy’s book entitled Friedrich Miescher & the Story of Nucleic Acid (Uncharted, Unexplored, and Unexplained), which I found to be an enjoyable and educational read.

While Watson & Crick may be names most associated with DNA, a German biotech company is determined that the world never forgets Friedrich Miescher. Tübingen-based CureVac, which develops RNA vaccines and therapies (see TriLink’s mRNA/longRNA products), plans to restore the University of Tübingen lab where Miescher made his discovery, according to a report in Nature. That space is now a computer room.

CureVac’s CEO, Ingmar Hoerr, is quoted as saying that Miescher “is one of the most important guys in science, and not many people are aware of it.”

After reading this post, you can now appreciate the basis for that opinion.

Oh, by the way, the principles of DNA isolation is now taught in grammer school, and is a favorite for science fairs, such as that pictured below. If Friedrich Miescher could see this now, what would he say? 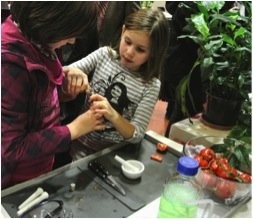 Visitors of all ages at Georg-August-University Göttingen in Germany are intrigued by demontration of how to extract DNA from tomato (taken from karlovsky.net via Bing Images).