Doubling Down on siRNAs in the Brain 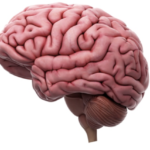 The title of this blog echoes a News & Views article in Nature Biotechnology published on August 2nd, 2019 by Beverly L. Davidson. The title is a clever play on words that succinctly summarizes the exciting findings reported by Khvorova and coworkers in the same issue of this prestigious journal. These investigators discovered that two covalently linked siRNA moieties in a novel construct called divalent siRNA (di-siRNA) enabled months of gene silencing in rodent and nonhuman primate brains after only one injection, greatly reducing the need for frequent and repeated interventions.

Efficient delivery of any therapeutic agent to the brain—especially macromolecular polyanionic nucleic acids—has been a long-standing challenge in drug design, making these new findings especially noteworthy. Before describing the essential features of this work and what was found, I will provide some background on siRNA, which can be supplemented by consulting a review by Lam et al. titled siRNA Versus miRNA as Therapeutics for Gene Silencing.

RNA interference (RNAi) is a natural cellular process that silences gene expression by promoting the degradation of mRNA. It plays an important role in gene regulation and innate defense against invading viruses. RNAi was first described in 1998 by Fire and Mello, based on their Nobel prize winning study investigating the mechanisms for effective gene inhibition by exogenous RNA in the nematode worm, pictured here. 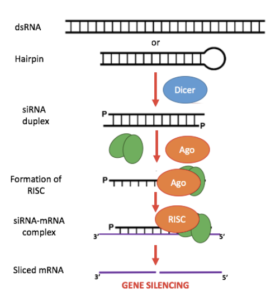 The multistep mechanism underlying RNAi originates with long double-stranded RNA (dsRNA) or hairpin RNAs that are processed in the cytoplasm of a cell by a specialized ribonuclease (RNase) III-like enzyme named Dicer, as depicted below, to produce a smaller dsRNA molecule. This short dsRNA (siRNA) molecule is comprised of strands that are 21–23 nucleotides each, and have 5’-phosphate groups and 3’ overhangs on two nucleotides. The siRNA interacts with and activates the RNA-induced silencing complex (RISC). The endonuclease argonaute 2 (AGO2) component of the RISC cleaves the “passenger” strand (sense strand) of the siRNA, while the “guide” strand (antisense strand) remains associated with the RISC. Subsequently, the guide strand guides the active RISC to its target mRNA for cleavage by AGO2.

Importantly, this RISC-mediated gene silencing process can be induced by exogenous siRNA that enters a cell, which allows chemically synthesized siRNA to target any gene for RNAi-based silencing. Through empirical testing, investigators have determined guidelines for siRNA sequence design, as well as guidelines for incorporation of a wide variety of phosphodiester and/or ribose modifications to provide stability against nucleases, yet retain RNAi activity. There are also many types of 5’ and/or 3’ terminal modifications, including fluorescent groups for visualization, and conjugates for facilitating cellular uptake. Readers interested in chemically modified siRNA for basic research or clinical applications can consult a review by Watts et al.

According to the featured recent report by Khvorova and coworkers, referred to as simply Khvorova from here on out, broad distribution of antisense oligonucleotides (ASOs) in the central nervous system (CNS) has been achieved primarily using phosphorothioate (PS) backbone modifications. PS modifications are readily introduced into chemically synthesized RNA (or DNA, as depicted here) using phosphoramidite monomers and a sulfurizing reagent. The most advanced CNS-active ASO utilizes a mixed backbone with at least 70-80% PS content, which maintains activity and distribution with minimal PS-related toxicity. 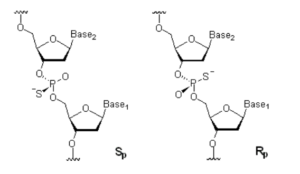 PS-modified DNA backbone Sp and Rp diastereomers. Taken from commons.wikimedia.org and free to use.

Previous blogs about PS-modified oligonucleotides posted in the Zone can be read at this link.

Khvorova postulated that an alternative approach may be multivalency. This method is defined by cooperative interactions between multiple partially PS-modified siRNAs through analogy to trivalent N-acetylgalactosamine (GalNAc) conjugation to siRNA, such as that depicted here, which drives delivery to the liver, as discussed elsewhere.

To investigate this hypothesis, Khvorova used an siRNA sequence targeting huntingtin (HTT), the causative gene in Huntington’s disease (HD), which I have previously blogged about. As depicted here, mutations in the HTT gene on chromosome 4 cause HD. The HTT gene provides instructions for making the huntingtin protein. Although the function of this protein is unknown, it appears to play an important role in neurons, specifically those at the base of the brain known as the basal ganglia. 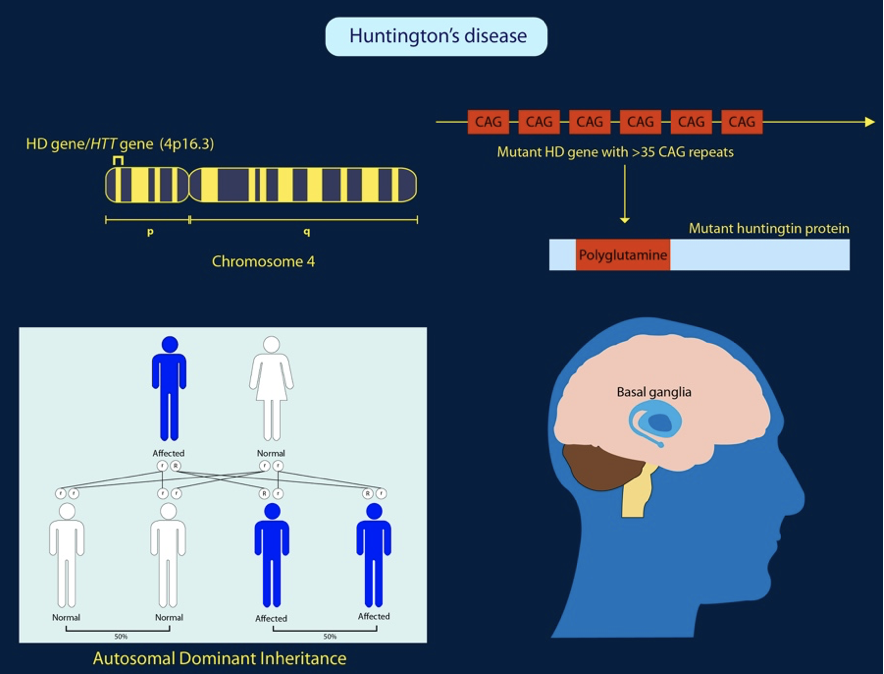 As schematically shown here, Khvorova used fully chemically modified asymmetric siRNAs with two 20-base guide strands and a single 3’-3’ linked 15-base passenger strand. In this novel di-siRNA construct, which is described in detail elsewhere, the terminal backbone positions and the protruding 3’ end of the guide strand have 26 internucleotide PS-linkages, while the other modifications include 2’-O-methyl (O), 2’-fluoro (F), and 5’-viinylphosphonate (V). Separately synthesized di-siRNA with two 5’ Cy3 labels was used as a fluorescent label for imaging. The total PS-content was ~40%, which represents about one-half of PS-content in CNS-active ASOs to date.

Key Findings for Di-siRNA in Mice

A mono-siRNA version, essentially the above di-siRNA structure “split in half,” was also synthesized for comparative evaluation. The mono- and di-siRNA compounds showed comparable in vitro half-maximum inhibitory concentration (IC50) values, suggesting that linking the two siRNA components does not compromise RISC loading. By contrast, intraparenchymal injection of Cy3-labeled di-siRNA directly into brain tissue enhanced the distribution and retention in mouse brain compared to the Cy3-labeled mono-siRNA. 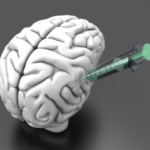 This supported the idea that the cooperative interaction between two partially PS-modified siRNAs is sufficient for widespread brain retention. As a technical note, it is worth mentioning that the doses of injected mono- and di-siRNA were defined by guide strand concentration, thus meaning that there were one-half the number of injected di-siRNA molecules vs. mono-siRNA molecules.

Di-siRNA targeting Htt mRNA was synthesized using a siRNA sequence previously reported by Khvorova and coworkers in 2015. Intrastriatal injection of di-siRNA in wild-type mice resulted in potent downregulation of Htt mRNA (between 50% and 75%) in the striatum and cortex 2 weeks after injection. Both Cy3-labeled and non-labeled di-siRNA showed similar levels of silencing in the cortex and striatum (~80% silencing), whereas the non-targeting control construct did not impact target gene expression.

Mouse brain, top view. Taken from commons.wikimedia.org and free to use.

Di-siRNA variants containing fewer and no PS backbone modifications were also synthesized for comparison. Reducing the number of PS modifications from 26 to 16 reduced silencing efficacy, and completely removing PS modifications fully abolished activity after intrastriatal injection in mice. Thus, the observed efficacy of di-siRNA is mediated by PS modifications. 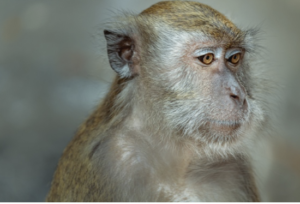 According to Khvorova, rodent systemic distribution is generally predictive of large mammal distribution, although this is not necessarily the case for the CNS. Di-siRNA was therefore delivered to a non-human primate (NHP; cynomolgus macaques) via ICV injection using magnetic resonance imaging (MRI) and computerized tomography (CT) to confirm needle placement into the lateral ventricle.

A 25-mg dose in 750uL of phosphate buffered saline was infused over 10 min. After 48 h from injection, uniform distribution throughout the NHP brain was observed, similar to mice. Upon sectioning of the brain, uniform cortical distribution was evident from fluorescent microscopy, with delivery to deep brain structures, including striatum and hippocampus, depicted here. 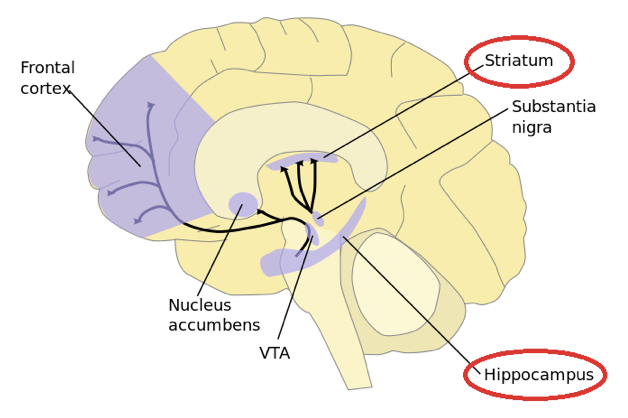 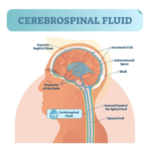 According to Khvorova, bulk-flow of cerebrospinal fluid (CSF) is thought to be the primary mechanism driving broad oligonucleotide distribution and clearance in the brain. Thus, the difference in size between ASOs (~7kD) and di-siRNA (~27kD) may contribute to the difference in distribution to deep brain structures. Bhagat et al. previously reported that linking of two ASOs via their 5’ ends resulted in better systemic efficacy compared to monomeric ASO variants. 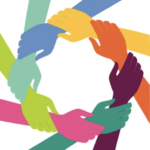 Khvorova added that the underlying mechanism for how PS content in di-RNA enhances brain retention and distribution is not fully understood. However, multiple cell surface receptors may be involved in PS-mediated oligonucleotide uptake, as detailed by Crooke and coworkers in ongoing investigations. By increasing the size and linking two siRNAs, the cooperativity of weak PS-driven cellular interactions produces robust cellular uptake and retention.

Because increasing the percentage of PS modifications in siRNA uniformly (e.g. every other linkage) or strategically may interfere with RISC and reduce tolerability, a multivalency approach may be preferable for fine-tuning siRNA uptake and toxicity in other RNAi systems. Additional investigations will be needed to determine whether Khvorova’s di-siRNA strategy can be generalized. However, as emphasized in Davidson’s News & Views article cited in the introduction, this discovery by Khvorova “opens the door to additional applications previously considered impractical for siRNA owing to partial silencing and short half-life of chemistries and formulations.”

I fully agree with this assessment, and in closing note that, in regard to possible therapy for HD, Khvorova states that “further evaluation in established models is necessary to assess the safety and efficacy of di-siRNA-mediated silencing of HTT.”