Lab-on-a-Drone and Other Innovative Point-of-Care Devices

Honey! I shrunk the lab!

Researchers have long dreamed of a “lab-on-chip” (LOC) wherein common laboratory procedures have been miniaturized and integrated in various formats using microfluidics—small, interconnected channels resembling electronic circuits on a chip—that provide low-cost assays for “point-of-care” (POC) applications. The cartoon to the right humorously but concisely depicts the general concept of LOC, for which there are virtually an infinite number of specific embodiments made possible by continuing development of many clever fabrication and microfluidic technologies for “shrinking” lab procedures.

Importantly, lab personnel are thus freed-up from slavish, repetitive tasks to instead carry out discovery and development work. Testament to the significance of LOC is evident from the astounding—to me—130,000 items I found in Google Scholar by searching LOC as an exact-word phrase. There is also a LOC Wikipedia site and a journal for LOC specialists named—appropriately—Lab on a Chip, which is already in its 15th year.

What follows is my take on some of the conceptual morphing, so to speak, of LOC-enabled devices that can be packed for portability, driven by remote control, or flown-“in-and-out” for all manner of unconventional, but critically important POC situations needing nucleic acid-based tests.

In archived blogs I’ve previously commented on examples of commercially available portable POC devices that are variations of a lab-in-a-box that can be easily carried in luggage or a back pack. By way of updates, here are some new applications for these systems illustrating wide diversity of use and location: 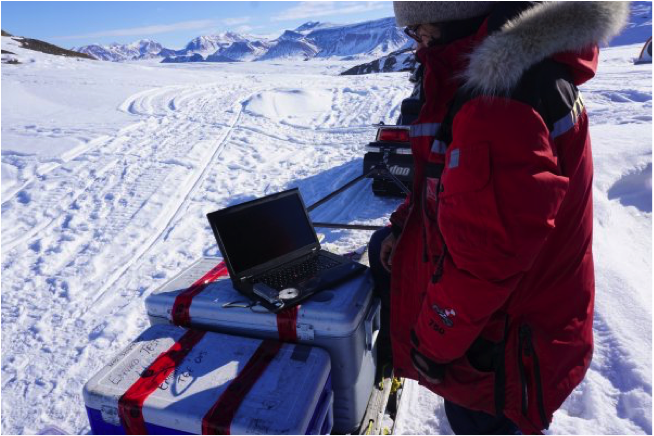 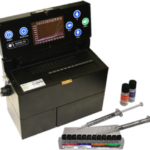 In the above examples, sample prep workflow is still in need of automation with appropriate LOC technology. However, progress in this regard is being made. One example is the RAZOR system developed by BioFire Defense (pictured below) that features a qPCR lab-in-a-box with ready-to-use, freeze-dried reagent pouches for the detection and identification of pathogens and bio-threat agents. While the progress is impressive, there is still work to be done. A dramatized video for RAZOR usage revealed that much manual manipulation and dexterity with syringes are still required, which suggests the need for complete LOC automation in the future.

Another example of facilitating POC sample prep is the Bento Lab, which is named to be word-play on Bento Box—a complete Japanese lunch in a small, partitioned box-like plate. This portable DNA laboratory created by Bethan Wolfenden and Philipp Boeing at University College London is small enough to fit into a laptop bag, weighs only 6.6 pounds, and can now be preordered for ~$1,000 as a “must have” accessory for so-called “citizen scientists,” some of whom have had early access and have posted their personal Bento Lab stories. 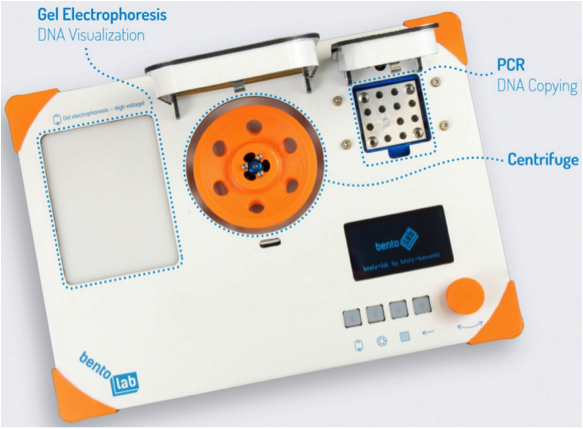 Biohazard accidents happen, as do bio-threat acts of terrorism. In these seriously scary situations, it may be safer or necessary for first-responders to deploy an Autonomous Vehicle as a self-navigating/driving lab-on-a-robot. Sounds far out, but the first example of a mobile lab-on-a-robot was demonstrated in 2008 by Berg et al., and is pictured below. 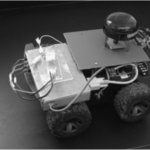 , and send data (electropherogram) to a remote station without exposing an analyst to the testing environment. It’s easy to imagine adapting this kind of robot for carrying out qPCR with EC or fluorescence detection, or nanopore sequencing, for rapidly identifying pathogens.

A logical variation of lab-on-a-robot is to attach the lab part to Unmanned Aerial Systems, (more commonly called drones), thus affording a means for “fly-in, fly-out” applications that require speed to and from a location, or for deployment to otherwise inaccessible locations. This biotech version of drone delivery was initially demonstrated for drone pick-up to aerially transport blood samples from patients to central testing labs, as reported by Amukele et al. 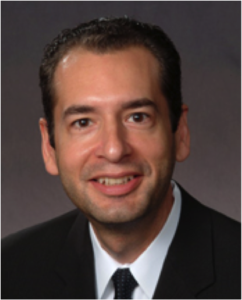 The much more difficult task of attaching a lab testing module to a drone has been recently demonstrated by Prof. Victor Ugaz and coworkers at Texas A&M University. Their pioneering 2016 publication titled Lab-on-a-drone: toward pinpoint deployment of smartphone-enabled nucleic acid-based diagnostics for mobile health care is loaded with details, and is a “must read” for technophiles. What follows is my extraction of some unique highlights of that work, as well as information I learned by contacting Prof. Ugaz, who incidentally has received numerous awards and honors.

The basic idea investigated by these researchers was to design a drone-compatible system that could perform what I call “qPCR-on-the-fly.” The drone would require low power consumption and use a smartphone for both fluorescence detection—via its camera—and data analysis via radio transmission of results on-the-fly.

To reduce power consumption by conventional PCR using thermal cycling, which uses power for both heating and cooling during each cycle of amplification, the Texas team invented a radically different approach to achieve isothermal PCR. As depicted below, this new method called convective thermocycling operates isothermally at 95oC and involves movement of reactants upward, away from the heater, through progressively cooler regions and then traveling downward to repeat heating, etc. in a cyclic manner. 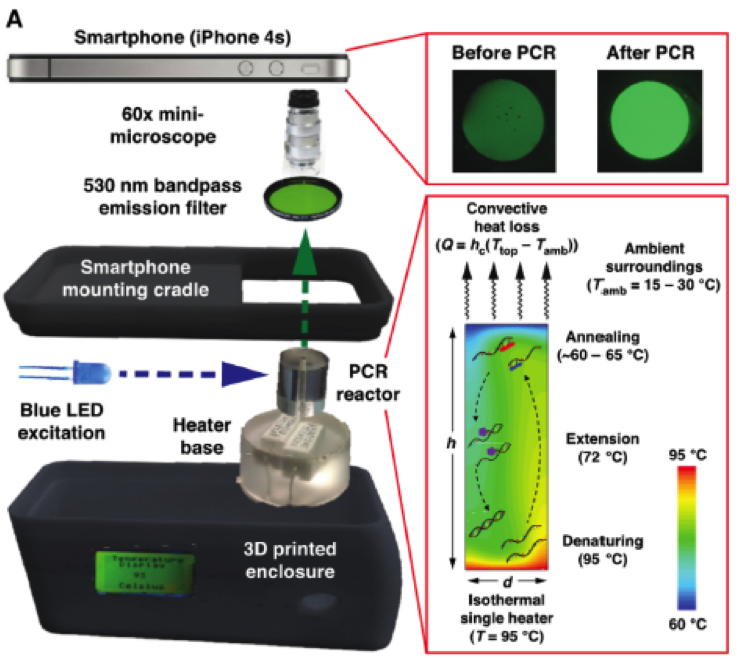 They mimicked POC for an Ebola virus epidemic, which required on-site sample prep and then reverse transcription of viral RNA into cDNA prior to hot start qPCR that is incompatible with convective PCR. The sample prep step was very cleverly achieved using centrifuge adapters that connect to the drone in place of propellers. These centrifuges in turn—pun intended—were fabricated using state-of-the-art 3D printing, and are pictured below.

The in-flight lab-on-a-drone is pictured below. While in-flight, smartphone-enabled qPCR (as depicted above) takes place during the return trip to home base in order to save time for re-equipping the drone to return to another site, thus increasing overall patient analysis throughput per drone. 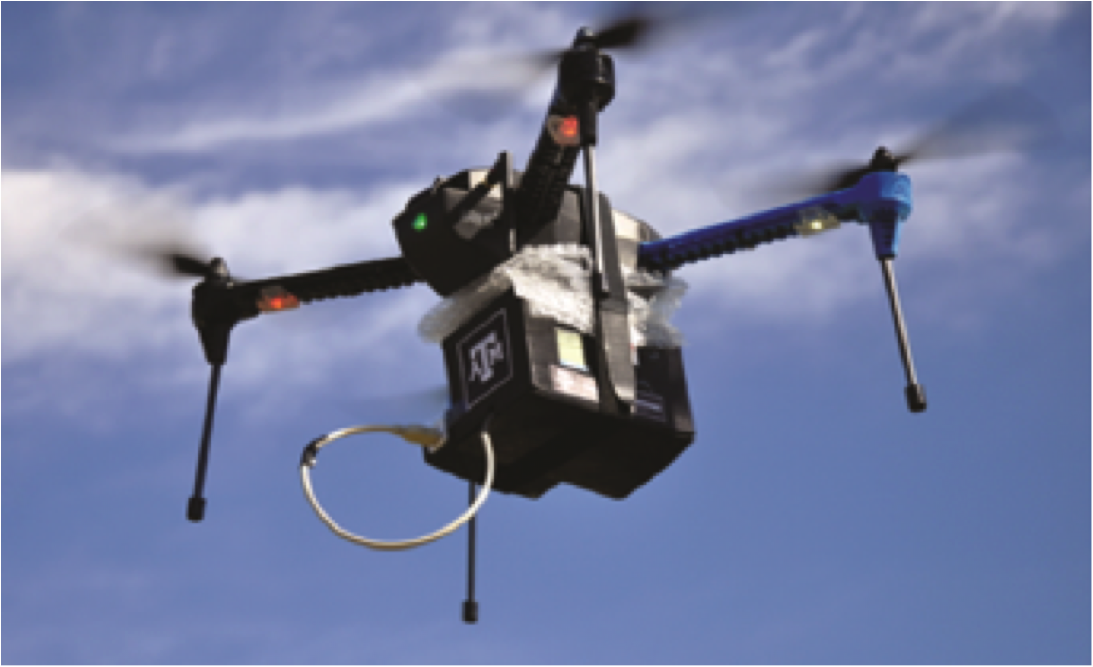 I contacted Prof. Ugaz to ask whether the reverse transcription (RT)-PCR could also be carried out in flight to further automate and increase drone throughput. He replied as follows:

“Many thanks for your interest in our work!  For the purposes of these proof of concept studies, we performed the RT and hot start steps off-device in a conventional thermocycler. However, these steps could straightforwardly be embedded in the portable device.  In principle it should be just a matter of either programming the heater to run through these additional steps (in which case we need to consider the thermal transient between steps, since we are trying to keep the device as simple as possible), or possibly have multiple separate heating zones on the device and have the user physically move the reactor from one to another for each step.  There are multiple possibilities to achieve this that can be explored, and the ‘best’ choice is likely related to the specific application that is envisioned.  But to answer your question, yes this is possible as a relatively straightforward extension of the current design...I have a student who will be working on this during the summer.”

e are looking forward to testing this soon and will keep you posted!”

This work by Prof. Ugaz will hopefully lead to encouraging results, and provide a great example of how TriLink CleanAmp™ technologies are enabling both scientific advancement as well as an amazingly interesting, new application such as that in this lab-on-a-drone story.

As always, your comments here are welcomed.