What is This Hot New Field of Electronic Sequencing?

Truth be told, I’ve been an avid follower—if not addicted technophile—of next-generation sequencing (NGS) ever since the 1990s when inventive researchers—fueled by NIH grant-dollars—dreamed of displacing ABI’s then dominant fluorescent-based (aka BigDye® terminator) DNA sequencing systems. Assessing proposed technology of this would-be-competition was in fact part of my job at ABI back then. At the time, ABI was selling hundreds of millions of dollars of its sequencing instruments and reagents into the then rapidly emerging—if not exploding—field of genomics. So, you didn’t need an MBA from Harvard to conclude that any company that could commercialize significantly “faster, better, cheaper” sequencing would find instant marketability and might achieve even higher revenues.

Since then, a remarkably large number of fundamentally different NGS approaches have been invented, of which only a handful actually enabled practical development of commercial systems, and of these only a few currently prevail: Illumina, Ion Torrent, and PacBio. Illumina’s fluorescently labeled, reversible terminator-based sequencing is widely regarded to be dominant, while Ion Torrent offers label-less electronic sequencing. PacBio’s fluorescently labeled single-molecule sequencing uniquely provides ultra-long reads and detection of modified bases. I should note that Complete Genomics fluorescently labeled, probe ligation-based sequencing—acquired by China’s BGI-Shenzhen—is currently limited to a service business but has recently pre-announced the launch of two new commercial systems.

Spurred by dreams of displacing these current NGS providers, and enabling new genomics applications—especially using small-footprint point-of-care/need systems—funding from NIH for ‘revolutionary DNA sequencing technologies’ continues to pour in, as does investments from private individuals, VCs, and big corporations such as Roche, which has multiple interests in NGS. Many of these would-be “faster, cheaper, better” NGS systems are trying to use nanopores—in one way or another, with Oxford Nanopore Technologies (ONT) currently in the lead. I’m saving a “still searching for nanopore sequencing” story featuring ONT for posting later this year, and will now focus on stealthy startup GenapSys because it appears to be the new hot technology—both literally and figuratively.

Thermally “Hot” Sequencing: Theoretical, but is It Practical?

I use the phrase “electronic sequencing” to loosely categorize various types of direct detection methods that do not use fluorescently or otherwise labeled reagents. Ion Torrent electronic sequencing technology is currently—pun intended—the leading example of this approach. You can read about its use of ion-sensitive field-effect transistors (ISFET) by clicking here. For now, you only need to know that Ion’s semiconductor-based sequencing “chips” detect proton release as change in pH (∆pH) that accompanies DNA polymerase-mediated incorporation of a dNTP, as indicated by the following equation:

This equation, which is literally cut-and-pasted herein from an issued U.S. patent by Hesaam Esfandyarpour, also includes change in temperature (∆T) as an alternative means of monitoring stepwise incorporation of each dNTP to determine DNA sequence. Interestingly, I came across another, earlier patent by Williams et al. at Arizona State University also claiming temperature sensing as a method for DNA sequencing.

According to specifications in Esfandyarpour’s patent, the envisaged method would use a microfluidic device having many insulated small wells—each less than about 70 picoliter (10-12 L)—that each contain 103-106 copies of DNA attached to a magnetic bead in order to measure a temperature change of at least 0.003 oC. I’m not an engineer, but this seems almost impossibly small to measure and implement in a massively parallelized manner for reliable sequencing. 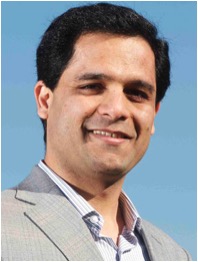 Although the proof-of-principle example described in Esfandyarpour’s patent was performed on a milliliter (10-3 L) scale, which is a billion times larger volume than the picoliter volume specified, it presumably provided—at least in part—a technical basis for Esfandyarpour to found GenapSys.  The company was incubated within the prestigious Genome Technology Center at Stanford University—the original patent assignee. As a side note, the co-inventor of this patent is Mostafa Ronaghi, whose significant accomplishments include foundational contributions to pyrosequencing, which was ultimately commercialized by uber-famous Jonathan Rothberg (co-inventor/founder of Ion Torrent) as 454 sequencing that was acquired by Roche but is now out of favor by NGSers. Biotechnology is indeed a small—and ever changing—world! But I digress…

Progress toward commercialization of a sequencing system by GenapSys has benefited from a $4M grant from NIH awarded in 2012. A portion of the publically available abstract of this grant states the following goals and approaches to be investigated:

We are proposing a system that integrates sample preparation and enrichment steps with the sequencing module. Sample preparation will rely on a re-usable magnetic-electronic chip and a novel emulsion-free amplification method. After amplification, enrichment of template carrying monoclonal beads is achieved through 'sorting' based on DNA charge. Beads are then transferred and held on a micromagnet array integrated with a sequencing sensor chip consisting of high-density arrays of CMOS-based nano-electronic sensors for direct detection of extension reactions. In lieu of a reverse emulsion we are developing an easy to use, chip-based approach that will combine multiple sample processing steps in a single device. The purpose of the 'Virtual Nano-Reactor' chip is to generate clonal amplified template on high-density array of single beads...The device will eliminate the variability in reaction volumes and double-Poisson distribution inherent in emulsion PCR. The re-usable "well-free" sequencing sensor chip provides high-sensitivity detection, efficient and uniform reagent delivery and washing, combined with the high efficiency bead capture and permits longer reads and higher accuracy by minimizing de-phasing and providing uniformity of reaction, and also reduce reagent consumption and cost. The re-usability of the chip significantly reduces the consumable cost…Our goal is to develop a platform to sequence a genome with consumable costs of ~$50, average read length of up to 1000 bases, and pre-assembly accuracy of > 99.7% with similar cost reduction and simplification for sample preparation.

I emphasize “direct detection of extension reactions” because this description doesn’t specify whether signal detection is based on change in temperature or change in pH. Intriguingly, the GenapSys website is also strangely silent on this technical point, about which I have not been able to clarify by pursuing other sources of information—aka the rumor mill.

Interesting, one such source speculated to me that perhaps the company plans to achieve higher accuracy, i.e. lower error rate, by simultaneously detecting both pH—like Ion Torrent—and heat—how cool!—pun intended. Aside from novelty, dual-mode detection might offer some advantages relative to either mode of detection alone. Notwithstanding this uncertainty about signal detection, the GenapSys system features a semiconductor-based sequencing “chip” that is pictured below, and superficially looks a lot like that used by Ion Torrent. 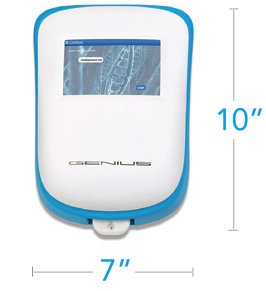 I suspect that Genapsys should soon release more information about their Gene Electronic Nano-Integrated Ultra-Sensitive (GENIUS) system as their early access program was announced at AGBT back in February of 2014. It seems for now, however, that the system is shrouded in secrecy, aside from a sketch of the small, seemingly hand-held system on the GenapSys website.

While it’s unfortunate that non-members of the GENIUS Club can’t get a sneak preview about the technology and its performance features, let me switch gears and offer some comments as to why GenapSys is proving to be a hot investment opportunity.

A successful biotech venture capitalist once told me that his fund’s best returns on investment came from startups that had what he called a sizzle factor—i.e., something over and above anything that was just technically “hot” and would thus draw in the next round of investors. For GenapSys, this sizzle factor comes from a combination of several things: 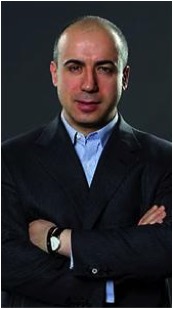 These sizzle factors were likely in part responsible for GenapSys’ ability to raise over $50M since inception, including Series B funding from Yuri Milner, the Russian entrepreneur who has also invested in Facebook, Zynga, Twitter, Flipkart, Spotify, ZocDoc, Groupon, 360Buy.com, Planet Labs, and Alibaba

Investment in Electronic Sequencing isn’t limited to Genapsys. DNAe Electronics in the UK is doing the same thing, and aggressively acquiring technology for complete automation. Based on what’s happened during commercialization of sequencing systems by Ion Torrent, Oxford Nano, and PacBio, I’m betting that it will take considerably more time and money for either of these companies to fully launch and globally support a system that enables compelling applications. I’ll be staying tuned to find out if these technologies can stay hot.

Your thoughts and comments are welcomed.