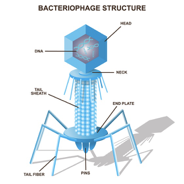 Many types of studies of the structures and functions of nucleic acids are facilitated by the use of chemically modified (mod) DNA or RNA probes. While various mod DNA or mod RNA can be obtained by chemical synthesis of oligonucleotides on solid supports, enzymatic methods are important. The DNA polymerase (pol)-catalyzed incorporation of mod 2’-deoxynucleotide triphosphates (dNTPs) has been extensively investigated (and recently reviewed), although less so for pol-mediated mod RNA. The enzymatic synthesis of mod RNA relies extensively on the use of the RNA pol from bacteriophage T7 (aka T7 phage), a virus composed of DNA that infects most strains of Escherichia coli bacterial cells.

T7 RNA pol (aka T7 RNAP) is readily available. Although it does not require complex transcription factors, it does necessitate specific promoters and the presence of guanosines in the +1 and/or +2 positions to ensure efficient transcription initiation. This requirement will be discussed below, in my short synopsis of a systematic investigation of mod RNA synthesis by this enzyme, a study that was recently published by Hocek and coworkers in the Czech Republic. Before getting to that, the readers should know that the structural details for the mechanism of T7 RNAP have been studied extensively, as referenced in a 2014 publication by Tang et al., from which the following cartoon-format pathway was taken.

The N-terminal domain (NTD) (blue), C terminal domain (CTD) (red), DNA (black) and RNA (dark green). Movement of the NTD is marked by the arrow. T7 RNAP binds, bends, and opens the promoter DNA from −4 to +2 to the same extent. The short, rigid C-linker (bright green), favors progressive rotation of the upstream end of the promoter to accommodate the growing hybrid from +4 to +6 positions, which pushes against the NTD driving the rotation of the promoter. The pushback from the NTD destabilizes the RNA:DNA hybrid and leads to abortive synthesis. The weakened promoter interactions after 9-nt RNA synthesis allow release of the NTD and transition into elongation.

According to Hocek and coworkers, the vast majority of known examples of pol synthesis of mod RNAs include the incorporation of 5-substituted U triphosphate (UTP) due to easy synthetic access, as well as the fact that groups at this position do not significantly perturb the structures of RNA duplexes. There are only a few scattered examples on the incorporation of mod C and mod A, such as 7-aryl- and 7-ethynyl-7-deazaadenine. More importantly, they add, “there has been no systematic study and comparison of substrate activity of NTPs bearing different modifications at pyrimidine or 7-deazapurine bases.” These researchers reasoned that, “[s>

ince the enzymatic synthesis of base-modified RNA is an important and underexplored area, such a systematic study may facilitate further use of this approach.” They therefore synthesized a set of 18 NTPs derived from all four bases bearing substituents of different steric bulk, then systematically studied them as substrates for T7 RNAP. 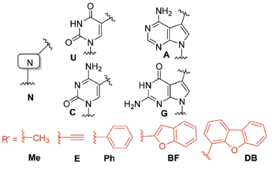 Those who are interested in learning more about the synthesis of these 18 NTPs can consult the publication by Hocek and coworkers, along with its extensive supplementary information. As depicted in the partial structures shown here, the pyrimidine NTPs for U and C were substituted at position 5, whereas the 7-deazapurine NTPs for A and G were substituted at position 7. The substituents were chosen with increased bulkiness: methyl (Me) (for deazapurines only), ethynyl (E), phenyl (Ph), 2-benzofuryl (BF)and dibenzo[b,d>

The synthesis of all 18 mod NTPs (collectively abbreviated as NRTPs) was based either on preparation of the corresponding modified nucleosides followed by triphosphorylation, or on several different types of known coupling reactions of iodinated intermediates and then triphosphorylation, in select cases.

All the synthesized NRTPs were systematically tested as substrates for T7 RNAP. Since all the literature examples of T7 RNAP syntheses of mod RNAs use specific promoters containing G in the +1 and/or +2 positions, Hocek and coworkers designed DNA templates containing the promoter and three guanosines in the +1– +3 position to test the incorporation of ARTPs, URTPs and CRTPs. For each modified base, they designed three different templates encoding the incorporation of either one, three, or seven modified nucleotides, as depicted here. In the latter case, there were also two adjacent incorporations of mod nucleotides.

Before proceeding to the results, I think it is worth providing an example of each of the three types of templates designed to enzymatically synthesize RNA_1NR, RNA_3NR, and RNA_7NR. These exemplary double-stranded DNA templates are shown below for N = A, and are taken from the supplementary materials, which provide similar details for all of the templates reported. The promoter regions in the antisense strand are underlined. Bases directing transcription of mod bases are marked in blue, and the mod bases in the transcripts are marked in red. In order to minimize non-templated nucleotide addition, the 5′-terminal nucleotide in the antisense strand of DNA templates was always a 2′-MeO ribonucleotide.

By analogy to what has been performed in the literature, transcription involved use of [α-32P>

-ATP. The mod RNA products were then analyzed by polyacrylamide gel electrophoresis (PAGE), and quantified using commercially available software. Hocek and coworkers emphasized that the transcription conditions needed to be carefully optimized to avoid misincorporations, especially when ARTP analogs were used. They found that addition of detergent (Triton X-100) and fine-tuning of Mg2+ ion concentration led to minimization of misincorporated transcript content in negative control experiments.

The mod RNA products were also characterized by mass spectrometry (MALDI-TOF), which in most cases confirmed the correct full-length modified RNA. However, in some cases, a 1-nt longer mod RNA product containing an additional n + 1 nucleotide incorporated in a non-templated manner was also observed.

PAGE and MALDI-TOF data indicated that single incorporations of ARTPs, URTPs and CRTPs, as well as incorporations of these same three NRTPs at separate positions, provided the desired RNA_1NR and RNA_3NR products with excellent yields (~100-60%) for smaller substituents, and moderate yields (~50-25%) for bulky BF or DB substituents. Yields with NRTPs bearing smaller substituents (Me, E or Ph) were typically comparable or only slightly lower than the natural nucleotides.

On the other hand, in the more challenging experiments aimed at incorporation of seven modified nucleotides with two pairs of modified bases in adjacent positions, the T7-RNAP-mediated synthesis of RNA_7NR was somewhat less efficient than the synthesis of natural non-modified RNA, as depicted here. The transcriptions with bulky DB-substituted NDBTPs did not give any significant amounts of the full-length transcripts.

Hocek and coworkers concluded that their studies demonstrated that the pyrimidine NRTPs bearing relatively bulky groups at position 5 are good substrates for T7 RNAP, and that the corresponding 7-substituted 7-deazapurine NRTPs with smaller or mid-sized groups up to benzofuryl can be reasonably efficiently incorporated into RNA. They emphasized that the substituents studied were not selected for a specific function, but rather to study the influence of the size of the group on the enzymatic incorporation. Nevertheless, in their opinion, at least the URTPs, CRTPs, and 7-deaza ARTPs “bearing smaller hydrophobic substituents certainly have a potential for applications in selection of aptamers.”

Some of the limitations for practical use include the fact that the first three nucleotides of the transcript are modified (i.e. the transcript must start with at least one non-modified guanosine), and problematic use of mod GRTPs. “The difficult sequences not accessible by T7 polymerase synthesis (e.g. any sequence starting with non-G nucleotides) still remain a challenge for future development, which in principle could be solved by engineered RNA polymerases not dependent on specific promoters. Studies in this direction are underway in our laboratory.”

As a final comment, I should point out that TriLink BioTechnologies offers a very large selection of base-modified nucleotides conceptually related to the NRTPs mentioned here. Interested readers may therefore further explore the synthesis of mod RNAs by following procedures akin to those mentioned above.

After this blog was written, I came across a 2019 review of chemical and enzymatic methods for synthesis of mod RNAs by Flamme et al. The Abstract concludes with the following statements:

Herein, the two main methods for the chemical modification of RNA are presented: solid-phase synthesis using phosphoramidite precursors and the enzymatic polymerization of nucleoside triphosphates. The different synthetic and biochemical steps required for each method are carefully described and recent examples of practical applications based on these two methods are discussed.

In addition, Thomas et al. published a paper titled One-step enzymatic modification of RNA 3′ termini using polymerase θ (Pol θ). The researchers demonstrate that “Pol θ efficiently adds 30–50 2′-deoxyribonucleotides to the 3′ terminus of RNA molecules of various lengths and sequences, and extends RNA 3′ termini with an assortment of 2′-deoxy and 2′,3′-dideoxy ribonucleotide analogs containing functional chemistries, such as high affinity attachment moieties and fluorophores.” General information about Pol θ can be found at this link. 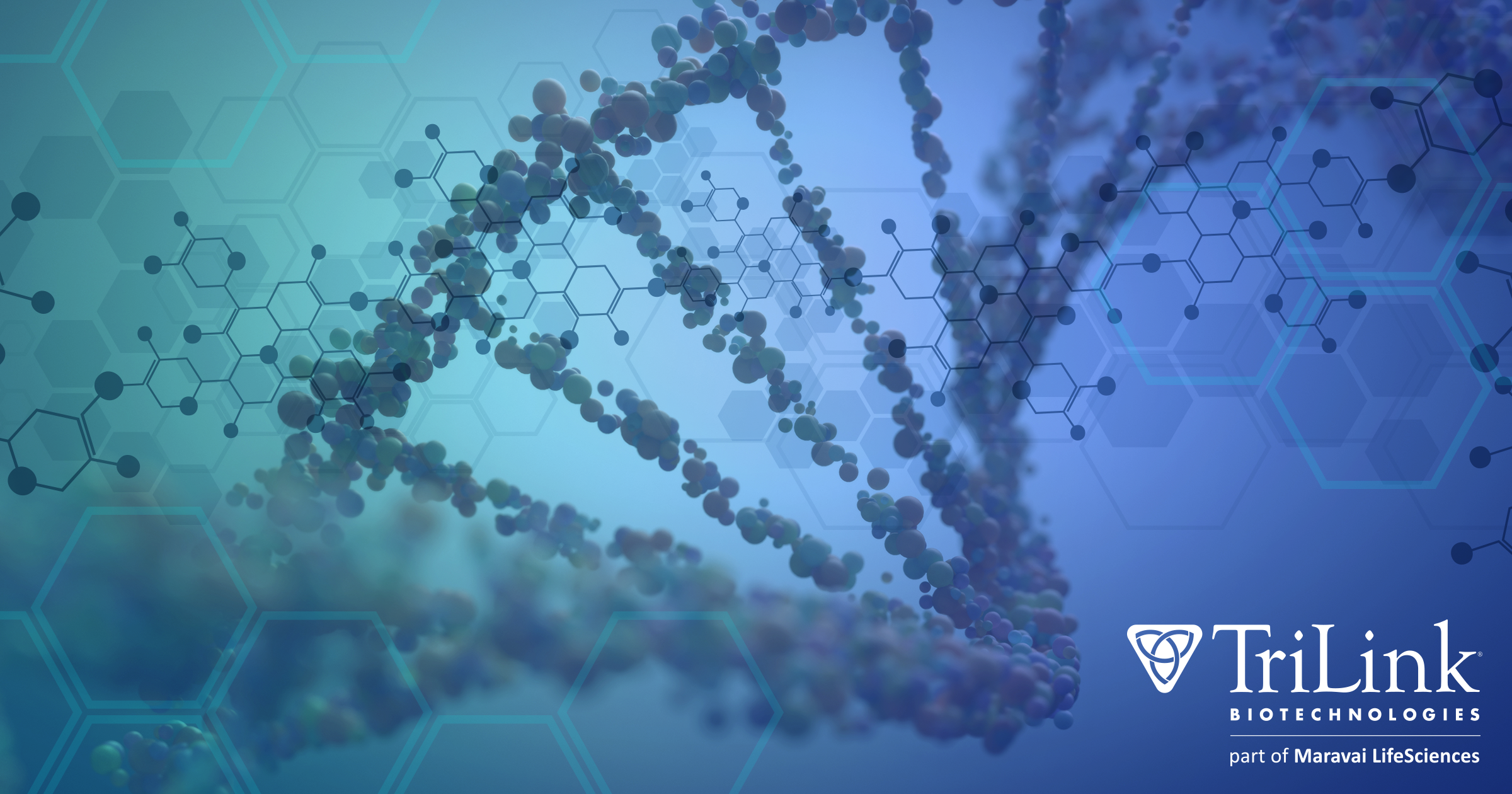