Exosomes are ~100 nm lipid bilayer particles secreted from a cell and contain various biomolecules originating from that cell, including cell surface proteins, DNA, and RNA. Exosomes were initially discovered during studies of the maturation of mammalian red blood cells and were first referred to as “exosomes” by Johnstone et al. in 1987. Since that time, and especially during the past decade, there has been an exponential increase in the annual number of publications in PubMed indexed to the term exosomes (Figure 1). 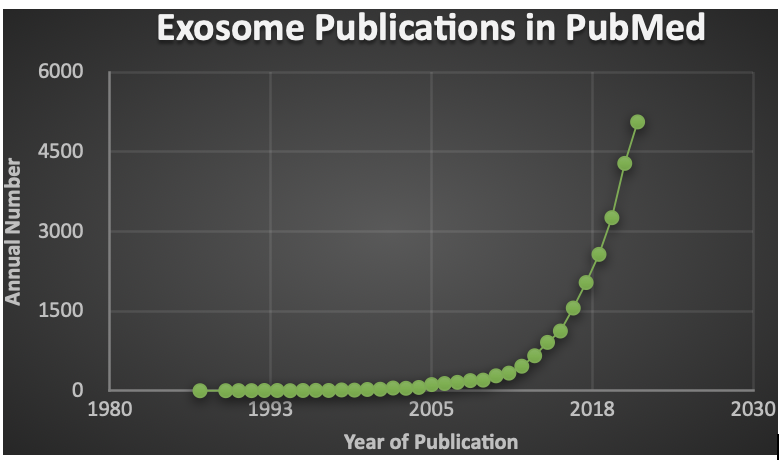 FIGURE 1. Chart of exosome publications in PubMed, found by a search for the term “exosomes” in all fields through 2021.

Exosomes have been recently reviewed in Science by Kalluri and LeBleu (2020), who expertly discuss these curious extracellular excretions' extraordinarily complex biology and function. The heterogeneity of exosomes’ size, content, and functional impact on recipient cells depends on their originating cell type, their “genomic health,” and their culturing conditions. Trafficking of exosomes between cells is the basis for extensive, ongoing interest in exosome-mediated intracellular communication.

Familial hypercholesterolemia (FH) is an autosomal dominant genetic disease characterized by severely elevated levels of low-density plasma lipoprotein (LDL) cholesterol (LDL-C) and premature coronary heart disease (Li et al., 2021). Nearly all cases of FH carry a loss of function mutation in the LDL receptor (LDLR) gene. As a key lipoprotein receptor on the surface of hepatocytes, LDLR is critical for LDL-C clearance from the circulation by the liver. There are no functionally redundant proteins to LDLR in vivo.

Current treatments for FH include several drug treatments and lifestyle modifications. However, these medications and lifestyle changes are not always enough to prevent serious complications for patients with FH. New curative therapies, especially for those diagnosed early in life, would hugely benefit these patients.

In 2020, a small Phase 1/2 clinical trial of a recombinant LDLR-expressing adeno-associated virus (AAV) was completed for patients with homozygous FH. However, long-standing concerns about the possible carcinogenicity of AAV therapies and the spectacular success of mRNA vaccines for COVID-19 prompted Li et al. to investigate exosome delivery of the mRNA encoding LDLR protein as a potentially safer and more effective therapy for FH. Key aspects of the approach used are as follows.

The robust abundance of the target cargo in mRNA-enriched exosomes is necessary for exosome-mediated gene therapy. Therefore, Li et al. constructed an Ldlr-expressing DNA plasmid vector with a strong promoter and regulatory elements to promote expression in vitro. Their plasmid vector was transfected into a “packaging” murine hepatocyte cell line that loaded the transcribed Ldlr mRNA into exosomes. These exosomes were isolated (Figure 2) and characterized as bona fide exosomes enriched in functional Ldlr mRNA (ExoLdlr). Finally, the researchers demonstrated that ExoLdlr could be efficiently delivered and translated into the functional LDLR protein in recipient cells in vitro.

FIGURE 2. Schematic illustration of the preparation of exosomes containing mRNA by transfection/infection of an exosome (empty circle) packaging cell with an Ldlr-expressing plasmid (red circle) for production of passively enriched exosomes loaded with mRNA (red squiggle)-encoding LDLR receptor protein, which is depicted on the transfected cell surface (red U-shape). Taken from Li et al. (2021) and free to use as an Open Access article under the CC BY license.

Next, it was shown that ExoLdlr treatment restores functional LDLR protein expression in vivo. Briefly, Ldlr-/- knockout mice were fed with a high-fat diet for 8 weeks to elevate LDL-C levels, then 3 days of daily injections of ExoLdlr were administered. The expression of Ldlr at mRNA and protein levels in the liver was examined 3 days after injection (Figure 3).

FIGURE 3. Schematic illustration of the experimental procedure for measuring functional LDLR protein. Ldlr-/- mice were fed a high-fat diet for 8 weeks, followed by the injection of exosomes produced according to Figure 2. The expression of Ldlr at both mRNA and protein levels in the liver was examined 3 days after injection. Taken from Li et al. (2021) and free to use as an Open Access article under the CC BY license.

Finally, the researchers extended their in vivo studies to examine the effects of ExoLdlr injection in other disease models of fatty liver disease and atherosclerosis in pre-fattened Ldlr-/- mice. Using a similar experimental design, ExoLdlr injection improved characteristics of both diseases according to various metrics, including conventional staining of liver sections and lesions, serum biochemistry, and expression of fibrogenic and inflammatory genes.

Although this study demonstrated positive data in mice with FH symptoms, Li et al. noted that several issues need to be addressed as this application moves toward the clinic: (1) reducing off-target exosome delivery to mitigate unwanted consequences; (2) reducing the amount of ExoLdlr required for therapy; (3) improving Ldlr mRNA stability; (4) encapsulating the mRNA into exosomes in a cell-free system; and (5) improving the yield and purity of exosome isolation.

Stephen Gould at Johns Hopkins University is an expert in exosomes and other types of microvesicles. This expertise, coupled with the continuing importance of COVID-19 vaccine development, led Gould and collaborators to investigate exosome-mediated mRNA delivery in vivo to induce SARS-CoV-2 immunity (Tsai et al., 2021).

As schematically depicted in Figure 4, there was an extensive multistep workflow for obtaining a “purified exosome preparation” from 293F cells. The cells are cultured in chemically defined media, followed by numerous serial centrifugations, filtrations, size-exclusion chromatography, and a final 100-kDa filtration.

FIGURE 4. Schematic describing the exosome purification procedure. Taken from Tsai et al. (2021) and free to use as an Open Access article under the CC BY license.

The three separate mRNAs encoding Antares2, S antigen, or N antigens were obtained as custom mRNA synthesis with the mRNA capped using CleanCap® technology from TriLink. Then, each mRNA was preincubated with a solution of cationic lipids, generating lipid-coated mRNAs. The lipid-coated mRNAs were subsequently loaded into exosomes by mixing-induced partitioning.

Empty control exosomes or exosomes containing both S antigen and N antigens, termed ExoS+N, were intramuscularly injected into the leg muscle of 13-week-old male mice on days 1, 21, and 42 with either a high or low amount of mRNA. Blood was periodically collected through day 84, when the animals were sacrificed, and blood and histological analyses were performed. ExoS+N vaccinated animals displayed a dose-dependent antibody response to both the S and N antigens of SARS-CoV-2. These antibody reactivities were relatively constant and long-lasting, persisting to the end of the 3-month study.

ExoS+N vaccinated and control animals were also analyzed for the presence of antigen-reactive CD4+ and CD8+ T-cells in splenocytes on day 84. A proliferation assay in the presence or absence of recombinant S and N proteins revealed a significant increase in the percentage of T cells of interest. These ExoS+N vaccine-specific, antigen-induced proliferative responses demonstrated that the vaccine achieved its primary goal: prime the immune system's cellular arm against the S and N proteins. Importantly, the scientists also saw an absence of any adverse effects in vivo.

The Gould-led team that authored Tsai et al. included researchers at Capricor Therapeutics, which is developing exosome-based therapeutics for the treatment and prevention of diseases. According to the company’s website, Capricor is developing its exosome platform as a potential vaccine for COVID-19. There is also a webcast from Capricor Therapeutics that provides more information on this program and aspects of Tsai et al. 2021.