Before getting to some truly fascinating—in my opinion—facts about epigenetics, I thought it would be worth briefly explaining the essence of epigenetics to get us in sync. Many similar but differently worded definitions of epigenetics have been proposed over the years; however, I favor this one, which a group of experts hashed out at venerable Cold Spring Harbor Laboratory—and published, together with their detail reasoning:

“An epigenetic trait is a stably heritable phenotype resulting from changes in a chromosome without alterations in the DNA sequence.”

The simplified cartoon shown below illustrates three molecular-level mechanisms by which identical sequences of DNA can give rise to different function:

Before exploring this topic in depth, it is important to note that these epigenetic changes can be induced by factors present in utero, during childhood, in environmental chemicals, drugs, or diet and during aging. In other words, while we each receive “genetic blueprints” in the form of parental DNA at conception, subsequently induced epigenetic changes influence traits that collectively make each of us who we are. 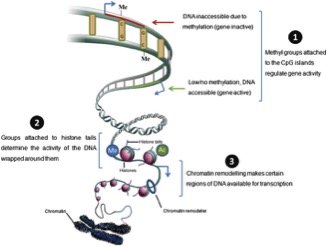 Taken from genetics2012regulation.wikispaces.com via Bing Images.

Given the increasing awareness of the importance and complexity of epigenetics, there are many different types of epigenetic analyses. Readers interested in a comprehensive compilation of contemporary epigenetic analytics may wish to consult a monograph entitled Methods of Epigenetic Analysis. In this regard, I should mention that TriLink has developed and offers what is likely the largest array of modified nucleotides and oligonucleotides as as epigenetic research reagents.

Let’s dive into these fascinating facts…

Taken from newsone.com via Bing Images.

1. You Are What Your Father Eats

It is well known that mothers-to-be need to get adequate amounts of folate (aka folic acid or vitamin B9) in their diet to prevent miscarriages and birth defects. This is because folate is known to play a key role in affecting DNA methylation, which in turn controls normal gene expression. Now, for the first time, investigators at McGill University in Montreal, Quebec, Canada have shown this aspect of a father's diet can similarly influence the health and development of their offspring.

As reported in highly respected Nature Communications, mice were fed diets containing sufficient or insufficient amounts of folate. It was found that paternal folate deficiency was associated with an almost 30% increase in birth defects, such as cranio-facial and spinal deformities in the offspring, compared to the offspring of mice whose fathers were fed a diet with sufficient folate.

Using genome-wide DNA methylation analysis, the researchers also found that there are regions of the sperm epigenome that are sensitive to life experience, particularly to diet. This information is in turn transferred to a so-called epigenomic map that influences development and may also influence metabolism and disease in the offspring in the long-term. The epigenome influences the way that genes are turned on or off, and hence how heritable information gets passed along.

The investigators concluded that “adequate paternal dietary folate is essential for offspring health.”

If you’re asking yourself whether these experimental findings with mice apply to humans, I found a more recent study (also in Nature Communications) to corroborate the McGill findings—albeit with women instead of men—and takes advantage of unusual circumstances in Africa involving—would you believe—weather! 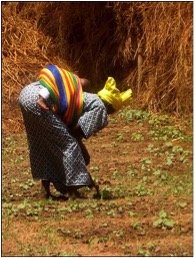 In rural Gambia, Africa where people depend on home-grown food, seasonal climate imposes a large difference in dietary patterns between rainy and dry seasons. The researchers enrolled pregnant women who conceived at the peak of either the rainy or dry season, measured the concentrations of nutrients in their blood, and later analyzed blood and hair follicle samples from their 2-8 month old infants.

They found that infants from rainy season conceptions had higher rates of methylated DNA in all six genes they studied, and that these were strongly associated with maternal blood levels of folate and other analytes related to DNA methylation. The authors concluded that their results “demonstrate that [human>

The practical take-home message is that while many women understand the importance of maintaining a well-balanced diet, and taking folic acid supplements during pregnancy, it may also be important for the father to maintain healthy folate levels prior to conception. Working together, both parents may significantly decrease the risk of birth defects and disease that may affect their children later in life.

The next time you’re exercising, remember this blog and the fascinating fact that you’re altering epigenetic patterns in your muscles! That’s the gist of recently published studies by researchers in Sweden based on the following very clever experiments. 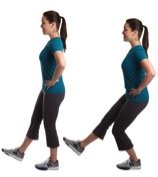 Twenty-three volunteers performed muscle exercises in an unusual way: using only one leg so that the other leg would serve as a control for each individual. The volunteers pedaled one-legged at a moderate pace for 45 minutes, four times per week for three months. Muscle biopsies—ouch!—were taken periodically and analyzed for DNA methylation and gene expression patterns.

They found that exercise induced different methylation patterns in genes associated with cellular carbohydrate metabolism regulation and structural remodeling, which suggested to the researchers that transcriptional changes in skeletal muscle due to exercise are linked to DNA methylation changes.

It’s unknown whether the genetic changes observed would persist after stopping exercise, and how other types and/or amounts of exercise might affect methylation patterns and gene expression. Stay tuned for further news on this front because I’m sure that this work will generate follow-on experiments. 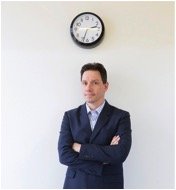 Steve Horvath’s epigenetic clock has surprised and stimulated many researchers. Taken from Nature 2014.

After you finish reading this post, you should find a bit of time to read an online news feature in venerable Nature magazine about Steve Horvath’s research at UCLA on methylated DNA markers for a new and more accurate way to measure aging. Here’s the gist of what he’s found.

Analysis of a wide variety of tissue samples taken from a large number of persons (13,000) of different ages revealed changing patterns of methylated DNA that correlated with age. While the median error range of plus or minus a few years may seem imprecise relative to physical clocks, the findings are quite surprising. For example, it’s not at all obvious why white blood cells, which rapidly turnover and may be just a few days or weeks old, show the same methylated DNA pattern as DNA from tissues with much slower turnover rates, let alone correlate with a group of, say, 25- vs. 50-year-old donors they came from, plus or minus a few years.

The news feature goes into Horvath’s difficulties in publishing these findings, and independent verification by other researchers who used all sorts of archived samples from persons of various ages.

Horvath is quoted as saying that he expects that the most interesting use of the clock will be to detect 'age acceleration,' i.e. discrepancies between a person's epigenetic and chronological ages, either overall or in one particular part of their body. Such discrepancies could be signs that something is awry. This is supported by an unpublished analysis of methylation data collected on more than 2,100 men and women aged 40 to 92 as part of the well-known Framingham Heart Study showing that for every five-year increase in age acceleration, the risk of dying from any cause during the study jumped by 15%.

By the same token, Horvath referred to other findings that people with HIV who have detectable viral loads appear older, epigenetically, than healthy people or those with HIV who have suppressed the virus. Similarly, another investigation found that some tissues show significant age acceleration in morbidly obese people.

While all of these findings are interesting, a big unanswered question is whether this epigenetic clock measures a process that has a purpose. More intriguingly, and because DNA methylation is reversible, we can all speculate on the possibility of somehow slowing down epigenetic aging to prolong healthy life.

What do you think about this?

As always your comments are welcomed.