Insecticides are pesticides intended to specifically target and kill insects. Annually, worldwide usage of all pesticides is estimated to be ~6 billion pounds, with insecticides accounting for ~1 billion pounds of that total. These huge quantities are concerning, as unintended exposure involves being subjected to significant amounts of potentially toxic or carcinogenic compounds, as detailed in a comprehensive review. In addition, the extent to which the intended specificity of the insecticide is achieved varies on a case by case basis, which leads to the inadvertent killing of non-target insects. A striking example is the disappearance of pollinating honey bee colonies attributed to neonicotinoids, a phenomenon now referred to as colony collapse disorder (CCD), as detailed elsewhere by the U. S. Environmental Protection Agency (EPA). Very recently, neonicotinoids have been reported to cause anorexia in birds like the white-crowned sparrow, shown here.

Due to spraying procedures and winds, the vast majority of applied insecticides never reach the intended target. Consequently, they are deposited in soil and water, leading to numerous adverse effects on ecosystems and on human health. For example, dichloro-diphenyl-trichloroethane (DDT) led to the 1948 Nobel Prize for Physiology or Medicine for its use in combating malaria, typhus, and the other insect-borne human diseases. However, DDT was banned in the U. S. by the EPA in 1972 because of mounting evidence of the pesticide's environmental and toxicological effects.

In 1962, the publication of Rachel Carson's Silent Spring stimulated widespread public concern over the dangers of improper pesticide use and the need for better pesticide controls. Since then, public awareness on the ecological and societal consequences of extensive use of all forms of pesticides, including insecticides, has increased. This is perhaps most evident by widespread adoption of “organic farming” practices, and increased sales of “organic” foodstuffs in stores and marketplaces. The interest in safe alternatives to chemically synthesized pesticides now also extends to oligo DNA, as discussed in the next section.

At the outset, it should be recognized that there is no simple answer to the question of how safe is “safe?” Readers interested in this exceedingly complicated yet very real issue can consult any number of articles found by a Google Scholar search of the word “pesticides” combined with the phrase “how safe is safe,” as this blog will bypass this ongoing, unresolved debate. According to Bahlai et al., selecting pesticides with a small ecological footprint is a key factor in developing sustainable agricultural systems. Policy guiding the selection of pesticides often emphasizes that natural products and organic-certified pesticides are more sustainable, as natural products are uniformly viewed as safer by the public, as well as more environmentally friendly than synthetic chemicals.

While Bahlai et al. report data on soybeans that contradicts this generalization, there continues to be significant interest in developing safe alternatives. Up to this point, these have included biopesticides naturally produced by various types of organisms, botanical pesticides from plants, and genetically engineered biosynthetic bacteria or viruses that are largely natural in structure, but include one or more foreign components.

With the advent of CRISPR-based technologies, gene editing—a subset of genetic engineering—is a newer technique being investigated. Previous blogs on CRISPR in the Zone blogs are available here, while a 2017 news feature in Nature provides a good synopsis of several investigations of CRISPR gene editing to combat pesticide resistance. This resistance problem, discussed next, is what prompted other investigators to consider oligo DNA agents.

Resistance to conventional pesticides used to combat insects, weeds, or microbial pathogens is common on farms worldwide. CropLife International, an industry association based in Brussels, supports efforts that have counted 586 arthropod species, 235 fungi, and 252 weeds with resistance to at least one synthetic pesticide. The numbers are likely much higher, as these are just the cases that scientists have formally identified and recorded.

For several decades, the agrochemical industry has simply rolled out new chemicals to replace the old ones. But for many crops, the pipeline is drying up. The Nature news item mentioned above reports that “the rate of discovery of pesticides has ‘gone almost to zero in the last ten years or so’,” according to Sara Olson, an analyst at Lux Research, a Boston, MA company specialized in emerging technologies. The article adds that “new chemicals are difficult and expensive to find and develop. And once one is in use, pests will soon develop resistance to it, so scientists are pursuing alternatives that may reduce or replace synthetic pesticides.”

Earlier this year, Oberemok et al. proposed a radically different strategy to combat pesticide resistance and provide a safer class of compounds, based on interference of gene expression using synthetic oligomers of DNA. This antisense oligonucleotide (ASO) approach, depicted here, has been successfully employed for years in cell culture, animals, and now in humans. While there is no precedent for an ASO approach in the field of pesticides, a rationale for this strategy has been put described as follows, initially in the context of an insecticide. 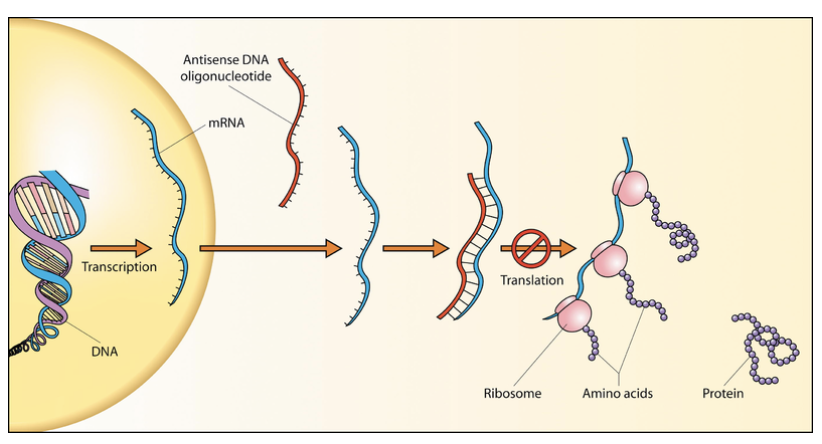 According to Oberemok et al., chemical insecticides are affordable and fast acting, but they are non-selective, have long half-lives, and potentially serious environmental consequences. While biological preparations are selective, they are slow acting and relatively expensive to produce. DNA ASOs are natural polymers that, due to the principle of complementarity, act in a highly selective manner. Thus, DNA ASO insecticides “are able to unite the best characteristics of the other types of modern insecticides, without the disadvantages, and can be synthesized in huge quantities.”

Oberemok et al. chose to investigate the mechanistic feasibility of oligo DNA-based insecticides by targeting the gypsy moth (Lymantria dispar). Gypsy moth larvae, shown here, consume the leaves of over 500 species of trees, shrubs, and plants. The gypsy moth is one of the most destructive pests of hardwood trees in the eastern United States, and is listed as one of the 100 most destructive invasive species worldwide. The larvae are voracious feeders, consuming more than 1 m2 of foliage per larva during the caterpillar stage. During outbreaks, when populations surge, larvae are capable of completely defoliating host trees, decimating cereal crops and vegetables growing near forested areas. 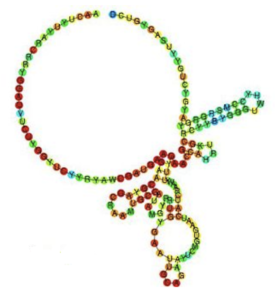 Predicted secondary structure of 5.8S rRNA. Color coded for the degree of sequence conservation (red is highly conserved). Taken from commons.wikimedia.org and free to use.

Oberemok et al. targeted ribosomal RNA (rRNA) instead of messenger RNA (mRNA). mRNA comprises only 5% of cellular RNA, while rRNA accounts for 80% of cellular RNA, and is more abundant and metabolically stable, making it an excellent candidate for targeting by a DNA ASO. They chose the 5.8S rRNA gene (depicted here) for their experiments, since this gene had already been successfully targeted by others for various applications. In cell-free translation experiments carried out using either rabbit reticulocyte extract or wheat germ extract, maximum inhibition was observed when an oligomer 10–11 nucleotides long was used. Longer chain lengths resulted in reduced inhibition. With each type of extract, mutated sequences (even single-nucleotide mutations) significantly reduced the level of inhibition, providing a basis for selectivity of action.

Consequently, Oberemok et al. designed an 11 nucleotide long (5′-TGCGTTCGAAA-3′; oligoRIBO-11) ASO complementary to the L. dispar 5.8S ribosomal RNA gene including the universally conserved antisense 5′-GTTC-3′ sequence, and investigated it as a contact DNA insecticide. Larvae were weighed to ensure that biomass was equal for treatment and control groups; the biomass among groups was within 3% and averaged 12.3 ± 1.2 mg. A hand-held sprayer was used to apply either a water solution of oligoRIBO-11 (20 pmol/µL) or water only (control), and larvae were allowed to dry and absorb the solution completely for 15–20 min at room temperature. After pulverization, it was found that there was 6 pmol of oligoRIBO-11 administered per larva by this protocol.

Mortality was assessed 3 days after treatment and gave 28% and 0% for oligoRIBO-11 and control groups, respectively. After 6 days, these values were 47% and 0%. To prove that oligoRIBO-11 caused RNase H-mediated antisense degradation of the target gene, quantitative reverse-transcription PCR (qRT-PCR; depicted here) of L. dispar 5.8S rRNA was carried out. This was done after Gypsy moth larvae were ground with a pestle in liquid nitrogen in preparation for RNA extraction. Readers interested in the details of these qRT-PCR procedures can consult Oberemok et al.

After 6 days, the concentration of the 5.8S ribosomal RNA in oligoRIBO-11-treated insects was 16.5-fold lower compared to that of the water-treated controls. In regards to qRT-PCR, it is worth mentioning that TriLink offers CleanAmp® One-Step RT-PCR 2X Master Mix as an optimized, ready-to-use mix of CleanAmp® dNTPs, M-MLV (RNase H-) reverse transcriptase, and Taq DNA polymerase in reaction buffer suited for one-step reverse transcription PCR in a single tube. Simply add primers, template RNA, and water!

Although only half of the oligoRIBO-11 insecticide-treated insect pests died, Oberemok et al. concluded that the availability, fast speed of action, and selectivity of this DNA ASO support its continued development. They added that “resistance to an ASO from a highly conserved region of the gene takes a long time to develop, [consequently>

one cannot ignore the enormous possible benefits of DNA insecticides.” In their opinion, “the easiest way to make this approach profitable and marketable is to dramatically reduce the price of such preparations. One way to do this is to create a product composed of multiple treatments, such as a solution containing several ASOs that target different genes. This approach, which attacks the insect via more than one gene, is more likely to be successful and increase the mortality rate to 80–90%.”

As with therapeutic ASOs and all other nucleic acid-based therapies, optimal delivery is critical for achieving maximum potency, i.e. ASO cost per dose. Oberemok et al. point out that this challenge is especially problematic for ASO insecticides that need to be applied in natural habitats, such as an oak forest. The insecticide not only needs to make contact with as much surface area as possible on the body of the insect, but it also must penetrate and reach the tissue vulnerable to it. With respect to application, Oberemok et al. plan to use cold fog generators, such as the one pictured here, to increase the area of contact with the body of the larvae.

Chitin. Taken from commons.wikimedia.org and free to use

To ensure that the insecticide penetrates to the insect tissues once it has been applied, Oberemok et al. say that they will use carrier molecules that increase the permeability of the insect’s chitinous outer layers. Chitin (pronounced KY-tin), is a long-chain polymer of N-acetylglucosamine (depicted here) that can be described as cellulose with one hydroxyl group on each monomer replaced with an acetyl amine group. This allows for increased hydrogen bonding between adjacent polymers, giving the chitin-polymer matrix increased strength. It is a primary component of cell walls in the armor-like exoskeletons of arthropods such as crustaceans and insects, as well as in the scales of fish and fungi.

In conclusion, and considering the widespread emergence of pesticide resistance, it seems to me that there is no question about the need for new molecular classes of pesticides, preferably with increased specificity to mitigate negative impacts on the environment, non-pests, and human safety. Oberemok et al. deserve credit for taking a bold step toward oligo DNA ASOs as one possibility. In its infancy, ASO therapeutics faced numerous challenges and many critics, but after decades of research and huge investments, it is now a fascinating and rapidly developing approach. It is not unrealistic to believe that ASO-based pesticides may become a reality sooner rather than later, advancing more quickly by leapfrogging past existing technical solutions. 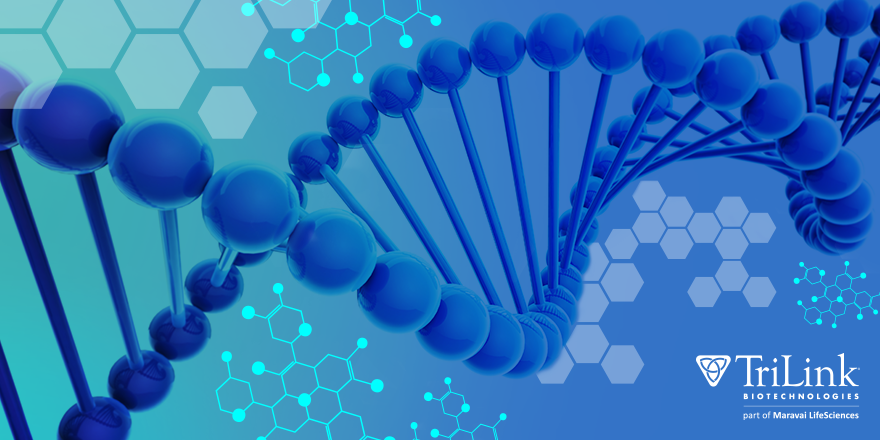