Regular readers of this blog will know that (a) I favor alliterations, (b) frequently feature PCR-based topics, and (c) I am fond of food facts involving nucleic acids, all of which are found in the title of this posting. While writing style and food are both a matter of taste, so to speak, it’s almost impossible to comment on nucleic acids without involving PCR, in one way or another, as PCR is—in my opinion—the most widely used and important method in molecular biology.

Having said this, and knowing that this summer alone Americans will likely consume an estimated 7 billion (!) hot dogs, (a.k.a. frankfurters or wieners), I thought it apropos to now feature finding frankfurter fraud by PCR. But before getting to that, I thought it’s worth commenting first on a frankfurter vs. wiener vs. hot dog and other “meaty” definitions to get us “linked” up—please pardon the puns, another of my penchants. 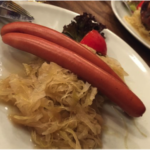 While it’s a fact that a resident of Frankfurt, Germany is properly called a Frankfurter, one of Frankfurt’s pork sausage specialties is also called a frankfurter—but spelled with lower case f—and is short for Frankfurter Würstchen, which go back to the 13th century. By the same token, wiener refers to a pork and beef sausage specialty introduced in the 18th century in Vienna, Austria—a city called Wien in German, and hence the word wiener.

Frankfurters and wieners look very similar, with the main culinary distinction being absence of serving with the bun, which by contrast is characteristic of a hot dog. Readers interested in the origin of the hot dog’s name and bun usage will learn at this link—pun intended—that there are various and widely different claims for this name and usage. 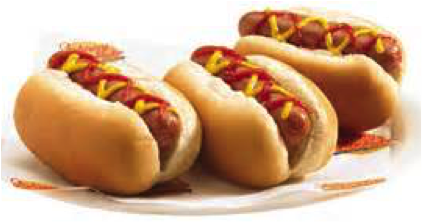 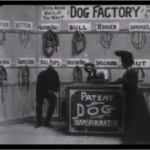 Dog Factory, a short film by uber-famous Thomas Edison in 1904 poked fun at what went into hot dogs. Taken from wikipedia.org

In one such claim, the term dog is said to have been linked—there I go again—to sausages made from dog meat, as popularized in an old spoof by Thomas Edison (!) pictured below. This issue of what meat(s) hot dogs and similar sausages contain now segues into finding frankfurter fraud using PCR.

Before getting to the meat of this matter (oops!) involving frankfurters, I thought it would be informative to provide some larger perspective on finding food fraud, generally, utilizing the power of PCR for specific detection of nucleic acids that are characteristic of a given species of any food whether it be meat, fish, vegetable, etc. My search of Google Scholar for articles with all of the terms “food, fraud, and PCR” gave ~3,900 items. Here are some selected samplings, the first of which was taken from several I found that used TriLink products—hooray!

As for finding frankfurter fraud by PCR, the aforementioned ~3,900 items from my Google Search of food, fraud, and PCR was sub-searched for frankfurter, which led to only 3 reports titled as follows:

The third item, which is by a team of Malaysian researchers and is the most recent, offers some interesting introductory perspectives on strict religious, cultural, or geographical restrictions over the consumption of certain meats in the context of commercial frankfurters.

For example, pork is totally unacceptable to Malaysia’s large Muslim population, as well as Jewish and certain Christian denominations. On the other hand, Egyptians prefer buffalo because of their cultural preferences, while some Indians and Europeans avoid beef because of religious requirements and the fear of bovine spongiform encephalopathy (aka “Mad Cow Disease”—click here for an FDA update), respectively.

In this Malaysian study, 100% beef, buffalo, or pork frankfurters were prepared as models, and then fully heat-processed in the laboratory to simulate conventional manufacturing procedures. Additional beef, buffalo, or pork frankfurter models were deliberately contaminated by “spiking” in 1%, 0.5%, or 0.1% of buffalo and pork, beef and pork, and beef and buffalo meat, respectively. PCR was then performed using species-specific primer pairs for two genes (cytochrome b and NADH dehydrogenase subunit 5) for cross-validation. Twenty different halal-branded (i.e. pork-free) “beef” frankfurters from Malaysian markets were tested. While no pork was detected in any of the tested “beef” frankfurters, they were all beef- and buffalo-positive, thus revealing that all of the investigated Malaysian commercial “beef” products were buffalo-adulterated.

The above mentioned concern for non-pork halal-assurance piqued my interest as to the extent of PCR usage for halal-related certification, and my subsequent Google Scholar search for “halal, certification, PCR” gave nearly 350 items. This relatively large number of reports signals quite widespread adoption of PCR. I encourage those interested to peruse these items later, but will mention here that the following article is the most cited—close to 100 citations as of February 2017—Identification of pork derivatives in food products by species-specific polymerase chain reaction (PCR) for halal verification

In closing, I think it’s worth noting in the context of halal certification—and increasingly popular “democratization” of technology, about which I’ve previously offered comments—a French start-up company now offers an antibody-based “dip stick” kit (Halal Test) for anyone to use for pork-free halal-assurance at home or even when eating out. Amazing. 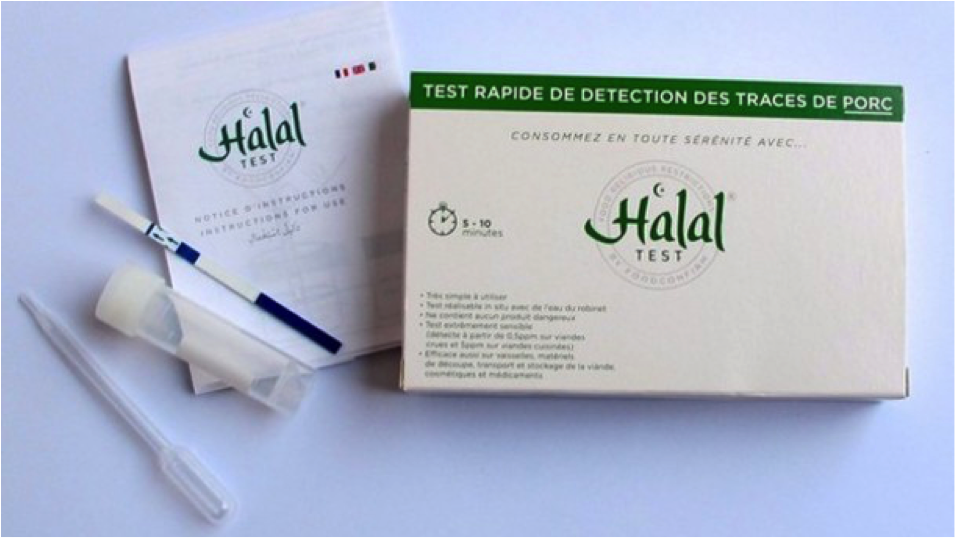 Frankly—pun-to-be intended—I don’t know how “hot dog!” became an exclamatory phrase for good news. It applies, however, to the fact that Clear Labs Inc. (a 2014 start-up in Palo Alto, California) has proven that several issues of concern for consumers of hot dogs can be successfully addressed by PCR/NGS methods.

In a Clear Labs’ poster abstract for the 2016 International Association of Food Protection meeting, results were reported for a study of 345 hot dog products sold by national brands to compare product label information and ingredient lists with the results of NGS analyses. Following DNA extraction, universally accepted regions for animals, plants, and bacteria were PCR-amplified for NGS, which revealed that ~15% of these products had ingredient substitution, unexpected ingredients, or hygienic issues. In addition, 10% of all products labelled as vegetarian contained detectable levels of meat DNA. Vegetarian products also accounted for 67% of hygienic issues, such as human DNA.

At the risk of overly generalizing these findings, I believe that they probably reflect very widespread issues in the food industry, which we as consumers are virtually helpless to deal with, and can only hope that US FDA regulations begin to mandate PCR-based food certification.

Having said this, I didn’t want to end with a “downer.” Therefore, I’ll conclude with some hopefully fun facts about hot dogs, which—if you’re wondering—can be made from beef, pork, turkey, chicken, or a combination (but must be labeled as such, according to FDA information worth reading later).

Just for fun, I calculated that the 7 billion frankfurters to-be-consumed by Americans this summer would stretch 56,818 miles (assuming each one were 6 inches long), which would wrap around Earth’s equator 2.3 times if placed end-to-end!

Some other fancinating frankfurter feats: 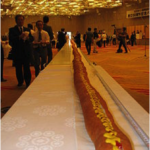 The world’s longest hot dog was 197 feet and was prepared by Shizuoka Meat Producers and the All-Japan Bread Association for the latter’s 50th anniversary celebration in 2006 at the Akasaka Prince Hotel: 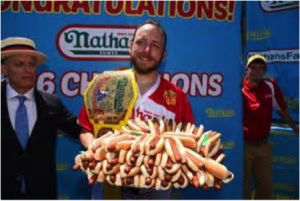