Aptamers are relatively short (~20 – 60 nucleotide) single-stranded nucleic acids that tightly bind to specific target molecules. These can either be small molecules or, more commonly, proteins or macromolecular ligands. Due to specific target-binding properties and the versatility of preparation even for targets on whole cells, aptamers are frequently referred to as ‘chemical antibodies.’ Importantly, however, aptamers can sometimes outperform antibodies, or be obtained against targets that foil obtention of an antibody.

As seen in this chart and following two independent seminal publications by Tuerk & Gold  and Ellington & Szostak  in 1990 on aptamer selection methodologies, the number of annual publications in PubMed for DNA or RNA aptamers has exponentially increased. 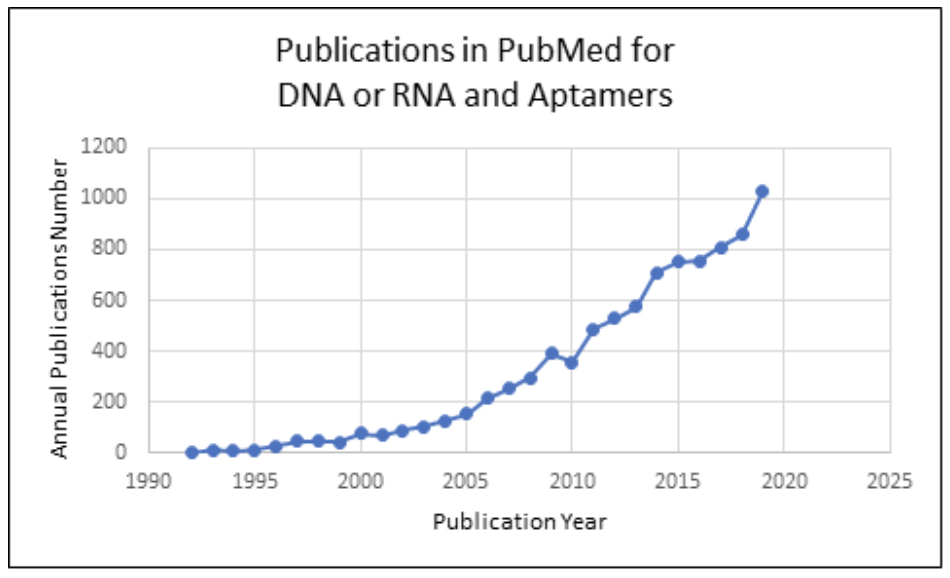 Chart of results for search query ((DNA) OR (RNA)) AND (aptamer) by Jerry Zon. 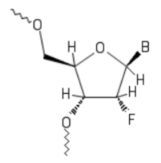 In a recent review of aptamer applications, the inherent specificity of ligand binding by aptamers was proven to be especially advantageous for diagnosis of various types of cancer, treatment of these diseases, or both, a concept defined as ‘theranostics’ – a portmanteau of therapeutics and diagnostics. The review also discussed the growing utility of incorporating chemical modifications into aptamers in order to expand the diversity of possible aptamer conformations and/or aptamer-ligand binding interactions, relative to naturally occurring nucleic acids. These chemical modifications have been reviewed by Lipi et al., and among them, 2’-fluoro (2’-F) RNA aptamers have attracted considerable attention following early investigations by Eckstein and others in the context of 2’-F modifications in ribozymes (1991) and mRNA (1994) for nuclease resistance.

Selection of 2’-F RNA aptamers usually employs polymerase-mediated transcription of a DNA template with one or more 2’-F-2’-deoxynucleotide 5’-triphosphates (2’-F-dNTPs) in place of natural NTPs, as reviewed elsewhere. Alternatively, after selection of an unmodified RNA aptamer, any desired fluorinated version can be chemically synthesized in-house using 2’-F RNA phosphoramidite reagents or via custom synthesis.

Polarity of carbon-fluorine bond. Taken from wikipedia.org and free to use.

The 2’ C-F bond is a polar covalent bond in which partial positive (δ+) and partial negative (δ-) charges reside on C and F respectively, as depicted here. F has high electronegativity (4.0) compared to C (2.5), and this allows the partially negatively charged F to function as a hydrogen bond acceptor, as reviewed by Howard et al.

The 2’ C-F bond polarity has many consequences on RNA structure and function that have been thoroughly discussed and investigated in a report by Egli and collaborators. For the purpose of this blog, the following takeaways are noteworthy. For oligonucleotides, 2’-F is used as a substitute for RNA’s 2′-hydroxyl (OH) group. The 2’F locks the sugar predominantly in the C3′- endo conformation, leading to significant increases in hybridization-based target affinity. This, and the resistance of 2’ F-modified RNA to degradation by nuclease first seen with ribozymes and mRNA (see above), provided performance advantages for antisense oligonucleotides (e.g. Cummins et al.) that later extended to other mechanisms of RNA interference (RNAi). Additional effects of 2’-F in RNA include altered secondary structures (e.g. Reif et al. and, especially, Moriou et al.) and less hydration with increased strength of base pairing (e.g. Pallan et al.). 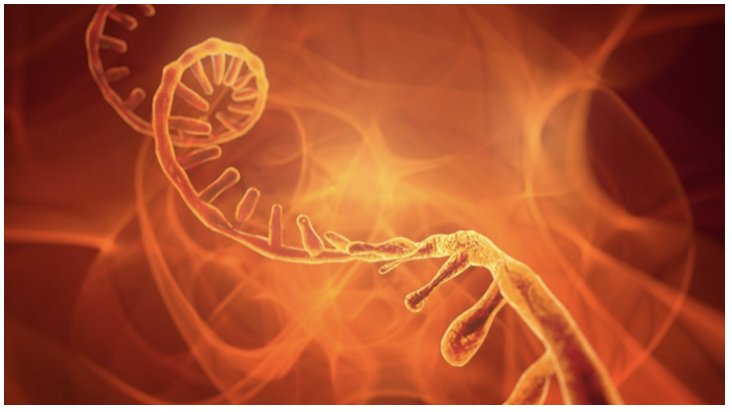 Miyakawa et al. reported on perhaps the most remarkable effect of 2’-F modification of an aptamer in a publication titled Structural and molecular basis for hyperspecificity of RNA aptamer to human immunoglobulin G. Using binding measurements and NMR spectra, their systematic analysis of 2’-modifications of an 18-mer RNA aptamer demonstrated that a single 2’F-modifcation in a bulge region accounted for this hyperspecificity.

In researching this blog, Google Scholar was used to find relatively recent (i.e. 2015 – 2020) publications related to the terms 2’-F, RNA, and aptamers that cited TriLink as the supplier of either 2’-F-dNTPs or custom synthesized 2’-F RNA aptamers. The search resulted in 125 items, approximately half of which were research publications, and half of which were patents. In light of the aforementioned importance of aptamers in therapeutics for fighting cancer, the research publications were perused by the Zone for novelty and/or significance. The following four examples were selected. 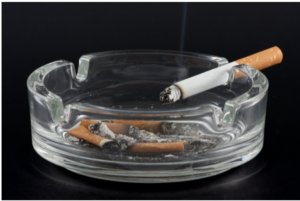 According to the latest available (2018) global cancer statistics for females and males combined, lung cancer is the most commonly diagnosed cancer (~11% of the total cases) and the leading cause of cancer death (~18% of the total cancer deaths). Smoking causes the majority of lung cancers, both in smokers and in people exposed to secondhand smoke. Lung cancer however, also occurs in people who have never smoked and in those who have never had prolonged exposure to secondhand smoke. In these cases, there may be no clear cause of the disease. 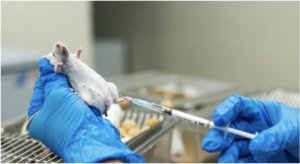 As a new therapeutic approach for non-small-cell lung cancer (NSCLC), Nuzzo et al. reported on a novel synthetic RNA construct comprised of an aptamer region for delivery and a microRNA (miRNA) for RNAi. NSCLC accounts for ~85% of all lung cancers. It is quite deadly and warrants new treatment options. The 2′-F pyrimidine-modified nuclease-resistant RNA aptamer, termed GL21.T, binds to and antagonizes the oncogenic receptor tyrosine kinase Axl, while miRNA-137 targets several genes known to play important roles in various human cancers and cell-cycle signaling. When treated with the dual RNA aptamer-miRNA construct, GL21.T-137, the A549 cell line used for studies of lung cancer showed significantly increased levels of miRNA-137 by qRT-PCR compared to controls. The levels of Cdk6, a validated miRNA-137 target, were comparatively reduced by 40% at 48 h. Moreover, Axl+ primary cells, obtained from surgical specimens of NSCLC patients and treated with GL21.T-137, showed inhibition of cell migration and growth. 7 days post GL21.T-137 intraperitoneal injection (shown here), tumor volume was also significantly reduced in A549 mouse xenograft models compared to controls.

Second only to lung cancer, prostate cancer is one of the deadliest cancer in males, according to 2018 global cancer statistics. Peixuan Guo and collaborators—including uber-famous cancer researcher Carlo Croce—have recently reported a multi-component strategy for a new approach to treating prostate cancer. In a nutshell, this strategy uses novel RNA nanotechnology combined with aptamer-targeting and cell-secreted extracellular vesicles (EVs) (depicted here) for prostate-specific delivery of an anticancer agent. 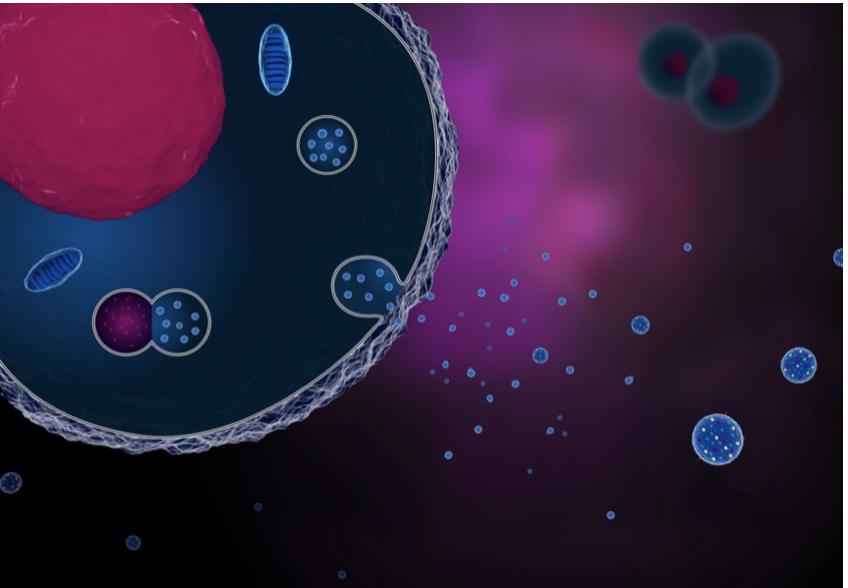 3D illustration of a cell secreting exosomes, i.e. extracellular vesicles (EVs), which are lipid bilayer-delimited particles. The vast majority of EVs are smaller than 200 nm. They carry a cargo of proteins, nucleic acids, lipids, metabolites, and even organelles from the parent cell. Numerous functions of EVs have been established or postulated, including “communication” between cells.

A trivalent RNA nanoparticle comprised of three RNA molecules (a, b, and c) bound at the three-way junction (3WJ) core sequences, to which a fourth sequence (survivin antisense) is hybridized to the surviving sense sequence that is part of a3WJ. RNA strands are shown as arrows in the 5’ to 3’ direction. Drawn by Jerry Zon.

Conjugation of membrane-anchoring cholesterol in one location results in the desired display of the A9g RNA aptamer on the outer surface of the EV, while placing the cholesterol at another location results in only partial loading of the RNA nanoparticles into the EVs. The desired EV construct was therefore loaded with survivin short-interfering RNA (siRNA) cargo (depicted here) for A9g PMSA-targeted delivery of siRNA to prostate cancer cells, which efficiently blocked tumor growth in three xenograft prostate cancer models. Survivin is a member of the inhibitor of apoptosis (IAP) family. The survivin protein functions to inhibit caspase activation, thereby leading to negative regulation of apoptosis, i.e. programmed cell death. This has been shown by disruption of survivin induction pathways leading to increased apoptosis and decreased tumor growth. 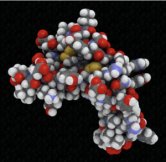 Among females, breast cancer is the most commonly diagnosed cancer and the leading cause of cancer death, according to 2018 global statistics. According to Yu et al., ~20%–30% of breast cancer is characterized by HER2 overexpression that correlates with poor prognosis, high aggressiveness, and extensive drug resistance. Resistance to HER2-targeted therapies is associated with increased levels of other HER family receptors, namely, epidermal growth factor receptor (EGFR) and HER1 – HER4. EGFR, HER2, and HER3 contribute to the initiation and progression of many cancers and are well-recognized therapeutic targets for antibodies.

Yu et al. add that most of these antibodies have a production cost and high immunogenicity. Consequently, the researchers engineered a two-component trifunctional RNA construct (depicted here) comprised of an EGFR siRNA (red), an aptamer for HER2 (green), and an aptamer for HER3 (blue). During transcription, 2′-F-modified pyrimidines were incorporated into these RNAs to replace CTP and UTP.

Two-component trifunctional RNA construct: EGFR siRNA (red); aptamer for HER2 (green), and aptamer for HER3 (blue). During transcription, 2′-F-modified pyrimidines were incorporated into these RNAs to replace CTP and UTP. Drawn by Jerry Zon.

Based on this design, the trifunctional RNA construct simultaneously blocks HER2 and HER3 signaling pathways, and also induces EGFR silencing in HER2-expressing cells. Importantly, in breast cancer xenograft models, this construct bound to breast tumors with high specificity and significantly inhibited tumor growth via either systemic or intratumoral administration. In addition to potential applicability to HER2+ breast cancer with intrinsic or acquired resistance to current drugs, Yu et al. posited that this “three-in-one structure” will simplify the processes and cost of manufacturing, and preclinical and clinical testing will involve less complicated drug administration to patients.

After writing this blog and reflecting on its content, I was reminded of a historically important report by Vannevar Bush (1890 – 1974) written in 1945 for President Franklin D. Roosevelt. Titled Science, The Endless Frontier, the report catalyzed the creation of the National Science Foundation (NSF), without which U.S. science would not have blossomed as it did. Advances in biomedical research, a critically important subset of applied science, have indeed proven to be an ‘endless frontier’ in which many advances are followed by additional ones. The invention of aptamer selection methodologies in 1990 has been followed by an amazing continuum of discoveries and applications, as exemplified by the aforementioned studies of aptamers for fighting cancer. As foreseen in Science, The Endless Frontier, the best is yet to come.