‘Genospirituality’—In the Spirit of the Holidays

This last blog for 2015 comes at a time when many of us are looking forward to the upcoming holiday season to enjoy, in various ways, being or sharing with family and friends, and reflecting thankfully for what we have. We often refer to this as getting into “the spirit” of the holidays, regardless of one’s religious or secular beliefs.

In this context, and with the nucleic acids research-relatedness of my blogs in mind, I thought it would be apropos to tell you a bit about some intriguing research aimed at assessing genes associated with spirituality, by which is meant “an inner search for enlightenment achieved through practices such as prayer [religious>

Researching the literature for studies attempting to link genetics with spirituality, I came across a book entitled The God Gene: How Faith is Hardwired into Our Genes by Dean Hamer, former Chief, Gene Structure & Regulation at NIH. Catchy title aside, but being a former Chief at NIH myself, I eagerly purchased this book to assess what in it might be blogworthy.

I was not disappointed as I found much of the book to be blogworthy and here it is, in a nutshell. Dr. Hamer used a 240-question true-false questionnaire to score seven dimensions of personality that included ‘self-transcendence’—a term used to describe spiritual feelings that are independent of traditional religiousness. In other words, to quote Dr. Hamer, “…the nature of the universe and our place in it. Self-transcendent individuals tend to see everything, including themselves, as part of one great totality,” whether a believer in ‘God’ or not.

The SNP-based genetic analysis of over 1,000 participants across race, age, and gender showed a statistical association of self-transcendent feelings with—surprisingly to me—only one gene! This so-called (albeit misleading) ‘God gene’ is vesicular monoamine transporter 2 (VMAT2), which is known to be directly involved in one of the neurologic dopamine functions associated with “hedonic [pleasure-related>

and addictive properties of drugs of abuse,” according to Eiden & Weihe.

Investigation of possible association of genetics and complex traits such as self-transcendence usually include twins living separate lives to sort out ‘nature vs. nurture.’ In Hamer’s study, separated twins with elevated levels of VMAT2 were more likely to develop a spiritual belief. Equally important, growing up in a religious environment was said to have little effect on belief. Both of these findings support Hamer’s view that nature trumps nurture in this instance.

Regardless of whether results of further investigations will support or challenge Hamer’s ‘God Gene’ conclusion, a follow-on publication by Linda Silveira at University of Redlands describes details for a class wherein students read and discussed Hamer’s book. The students then conducted PCR analysis of three polymorphic sites in VMAT2 in genomic DNA extracted from their own cells. Associations between particular VMAT2 alleles and scores on a personality test are then assessed by t test. In a survey, students reported the laboratory project aided their learning, especially in the areas of statistics and the linking of genes to behaviors. They reported high levels of engagement with the project, citing in particular its personal nature as motivating their interest.

If you’re interested in DIY analysis of your ‘God gene,’ Silveira’s publication provides you with all of the information to do so.

As usual, your comments are welcomed, and I hope you get into the spirit of the holidays—pun intended—regardless of which gene(s) is (are) involved!

Thanks and Happy Holidays!

My sincere thanks to those who are regular readers of my blog. All of my colleagues at TriLink and I wish you safe and Happy Holidays!

I’ll be back on January 5 with the first blog post of the New Year. 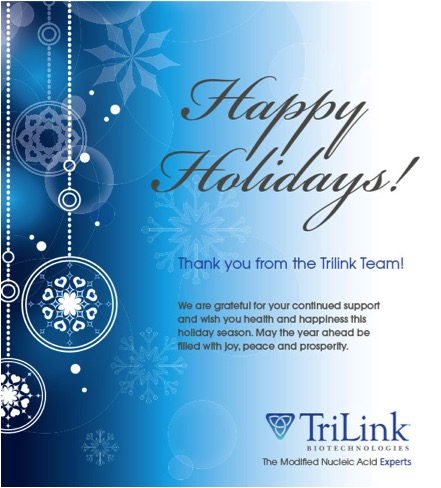