The idea for the OTS was conceived in 2001 by an international group of renowned oligonucleotide scientists, who hoped to bring together expertise from different angles of oligonucleotide research and create synergies to help the field accomplish its full therapeutic potential. The vision included a new era of oligonucleotide drugs that would change the landscape of therapeutic modalities.

This prescient view of a “new era of oligonucleotide drugs” has indeed become reality, and has expanded to include much longer polynucleotides, namely mRNA. The OTS 2018 meeting held on September 30 - October 3 in Seattle, WA, attracted nearly 600 participants from around the world, pictured in this group photo. There were many excellent talks and posters, and before commenting on my favorites among them, I have attempted to distill into a few words my overall impressions about what was “hot,” “new”, and “different” at OTS 2018 compared to past meetings.

CRISPR is definitely “hot,” based on the large number of CRISPR talks and posters, which complemented CRISPR “rock star” Dr. Feng Zhang’s exciting Keynote Presentation titled Genome Editing Technologies and Beyond. Here are links to his 83 CRISPR-related publications, and my previous blogs related to CRISPR. 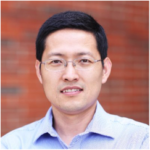 Prof. Yizhou Dong. With his permission.

This year’s Young Investigator Award was presented to Prof. Yizhou Dong, an Associate Professor at the Ohio State University College of Pharmacy. His presentation titled Development of Nanomaterials for mRNA Therapeutics and Genome Editing described the development of novel nanoparticles for delivery of Cas9 mRNA for improved CRISPR editing of genomic DNA. This exciting talk encompassed both the “new” and “hot” topics at OTS 2018 that I mentioned above. 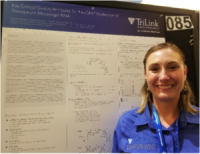 I’m pleased to say that a portion of Prof. Dong’s work was enabled by mRNA gifted by TriLink, and I am doubly pleased that TriLink presented two posters on its mRNA technology and products. One TriLink poster titled Key Critical Quality Attributes for the cGMP Production of Therapeutic Messenger RNA was presented by Jessica Madigan, pictured here, and Craig Dobbs presented a second TriLink poster titled Considerations for the Design and cGMP Manufacturing of mRNA, which featured a novel method for improved synthesis of 5’-cap analogs of mRNA that is referred to as CleanCap®.

In the multi-talk Session on mRNA and CRISPR, Prof. Paula Hammond, Head of the Department of Chemical Engineering at Massachusetts Institute of Technology, gave a presentation titled Designer Polypeptides and Electrostatic Assembly for RNA-Protein Enhanced Delivery. The title alone piqued my interest because, in general, macromolecular self-assembly to form functional complexes in a predetermined manner is a trending topic in nucleic acid chemistry.

Prof. Hammond started off by saying that the traditional approach to mRNA delivery is the encapsulation of mRNA within a polycation. This approach requires mRNA to escape the polycation following endosomal uptake of the cargo, and to ultimately access the cytosol, where it can be translated. The translation step requires binding of the mRNA capping protein, EIF4E, Eukaryotic translation initiation factor 4E, and without this binding step, the mRNA is marked for degradation within the cell. 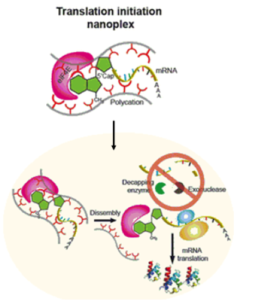 By contrast, Prof. Hammons has demonstrated that the pre-encapsulation of the EIF4E cap pre-complexed with based-modified (5’-methylcytidine and pseudouridine) mRNA—obtained from TriLink—can enhance mRNA translation within cells, multifold in comparison to release of mRNA alone. Furthermore, it was found that a unique series of polypeptides with variable charged side chain structures can enhance encapsulation of mRNA with EIF4E, with optimal systems yielding 70 to 80 times that of the mRNA alone. A key to these polymers is their ability to cooperatively bind RNA to the associated protein machinery needed for translation, in order to enhance translation.

More recently, Prof. Hammond has found similar kinds of enhancements for the delivery of siRNA via co-complexation with the Ago-2 protein to create a pre-assembled version of RISC complex. Finally, the layer-by-layer approach can be used to generate finely tuned release surfaces that can release small molecule, proteins, nucleic acids and other biologic drugs over sustained time periods, and with significant control of release characteristics. According to Prof. Hammond, this approach is particularly attractive for the delivery of proteins and nucleic acids such as siRNA.

In my recent blog I wrote about the highlights of the 23rd International Roundtable on Nucleosides, Nucleotides, and Nucleic Acids, and I commented on the virtually ubiquitous use of PS-modified linkages in all types of strategies for oligonucleotide-based therapeutics. I added that attention was now being given to stereoselective synthesis as a means of evaluating the influence of stereopure Rp or Sp linkages. Consequently, I and everyone else listened very attentively to the talk titled Stereochemical Control of Antisense Oligonucleotides Enhances Target Efficacy given by Chandra Vargeese, PhD, Senior Vice President Drug Discovery at Wave Life Sciences (Cambridge, MA).

Dr. Vargeese introduced the approach being used, and then presented data for antisense oligonucleotides shown here. These oligonucleotides were comprised of stereorandom or stereopure Rp (red ˄) or Sp ( black ˅) linkages at specific positions in a 20-base gapmer antisense nucleotide (gray filled ο) of unspecified sequence that was used to measure the kinetics of RNase H-mediated cleavage of complementary RNA as a model target.

Under the reported conditions, this construct gave initial kinetics that were 2-fold faster than the corresponding stereorandom antisense sequence. While this difference in efficiency was not very impressive, in my opinion, it was followed by in vitro results for free-uptake of stereopure and stereorandom antisense oligonucleotides against Malat1. In these experiments, the inhibitory concentration (IC50) values indicated 20-fold increased potency for the stereopure compound, which is quite impressive. Moreover, knockdown of Malat1 mRNA by the stereopure compound was about 10- to 100-times more effective than the stereorandom compound in mouse eye at 1 week.

Dr. Vargeese presented very intriguing data on uptake and distribution, which is not easily summarized here, but will hopefully be published with all of the above data in the near future alongside efficacy results for disease models in animals. 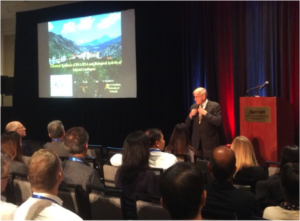 The aforementioned synthesis of stereopure PS-oligonucleotides, which is enabled by phosphoramidite coupling followed by P3 → P5 conversion with a sulfurizing agent, is my segue into the OTS Lifetime Achievement Award. These year’s honoree was Prof. Marvin (“Marv”) Caruthers, whose talk was titled Chemical Synthesis of DNA/RNA and Biological Activity of Selected Analogues.

Marv began with his recollections of his lab’s development of the now universally employed phosphoramidite synthesis method, which he said was aimed at the younger members of the audience, jokingly adding that “oligos aren’t magically made by Federal Express.” Marv ended his talk with a description of how he has morphed his method to provide a wide variety of novel analogues. My blog about Marv’s marvelous contribution can be read here.

Delivery of Oligonucleotides to the Brain

At the risk of oversimplification, the human brain is sort of a “sanctuary” organ by virtue of a biochemical/vascular barrier (aka the blood brain barrier) that prevents or mutes continuous assaults, if you will, by chemicals or biochemicals that are harmful to the brain and its central nervous system (CNS). This makes delivering small drugs to the brain difficult, let alone relatively large single-stranded oligonucleotides. Consequently, current approaches for delivery of oligonucleotides to the brain have been largely restricted to using invasive intrathecal administration. 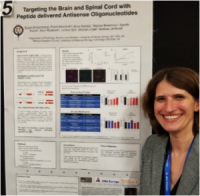 By striking contrast to intrathecal administration of oligonucleotides, Dr. Suzan Hammond, pictured here, reported use of conventional systemic administration. Dr. Hammond is a postdoc with Prof. Matthew Wood in the Department of Physiology, Anatomy, and Genetics at the University of Oxford in the UK. She presented a poster titled Targeting the Brain and Spinal Cord with Antisense Oligonucleotides.

This work, which was carried out in collaboration with my long-time friend and oligonucleotide synthesis guru Prof. Michael Gait, employs a rather remarkable peptide-“oligonucleotide” conjugate. The “oligonucleotide” portion is a neutral-backbone, 6-membered ring morpholino (PMO) structure, which is quite unlike a deoxyribonucleotide, and has always been somewhat of an oddity in the oligonucleotide field. In any case, the PMO is conjugated to a PMO-internalizing peptide (Pip). 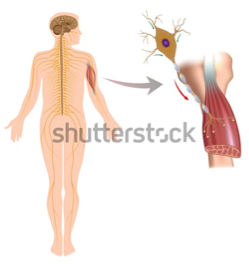 Interested readers can consult full details in a publication by Hammond et al. in the prestigious Journal of the Proceedings of the National Academy of Sciences. Dr. Hammond’s poster reports preclinical data that demonstrates potent efficacy in both the central nervous system (CNS) and peripheral tissues in severe spinal muscular atrophy (SMA), a leading genetic cause of infant mortality primarily due to lower motor neuron degeneration and progressive muscle weakness, which results from loss of the ubiquitous survival motor neuron 1 gene (SMN1).

As a follow-up to my question about future plans, Prof. Gait kindly provided the following reply by email:

"There is ongoing work in progress in Oxford, including a small spin off

company, to take the concept of peptide-PMO drugs towards clinical

neuromuscular diseases, that include SMA. However, in the case of SMA, a

that might have a favourable toxicology profile, whilst maintaining

strong activity than the current peptides reported here, in the

expectation of reaching a suitable clinical candidate as soon as possible."

As a researcher who shared the initial vision of oligonucleotides as new therapeutics in the late 1970s—which faced far more naysayers than believers—I was more than gratified to be part of OTS 2018, and feel the positive “vibes” among nearly 600 participants, especially since this group included many young next-generation investigators, who represent the critical mass needed for future successes in this now firmly established field.

And speaking of the future, please note that in 2019 the 15th Annual OTS Meeting will be held in Munich, Germany.

Given the difficulty of obtaining grant money for research, some of you will be pleased to know that the Ono Pharma Foundation sponsors the Breakthrough Science Initiative Awards Program. At OTS 2018, a representative of Ono Pharma gave the following information:

This program targets “groundbreaking work using synthetic oligonucleotides to gain valuable insights into molecular mechanisms, delivery strategies, or physiologic targets.” The grant is for $900,000 plus up to 15% indirect costs for 3 years of research, and there is no IP (intellectual property) obligation. Eligibility is for institutions in the US and Canada. Previous awardees are Jonathan Watts, PhD (Univ. of Mass.) in 2017, and William Mobley, MD, PhD (Univ. of Calif., San Diego). 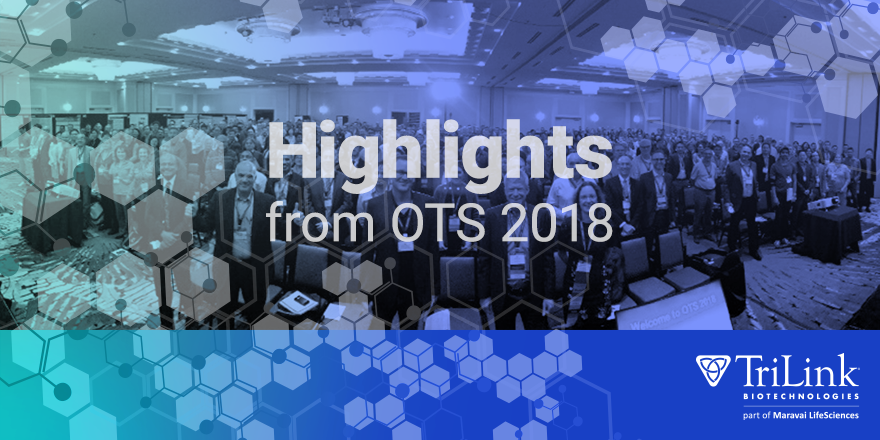