The idea of the OTS was conceived in 2001 by an international group of renowned oligonucleotide scientists who aimed to create synergies by bring experts from different areas of oligonucleotide research together, in an effort to help the field accomplish its full therapeutic potential. The founding vision included a new era of oligonucleotide drugs that would change the landscape of therapeutic modalities.

This prescient view of a “new era of oligonucleotide drugs” has indeed become reality, as indicated by the chart shown here depicting the annual number of publications in PubMed on the topic. 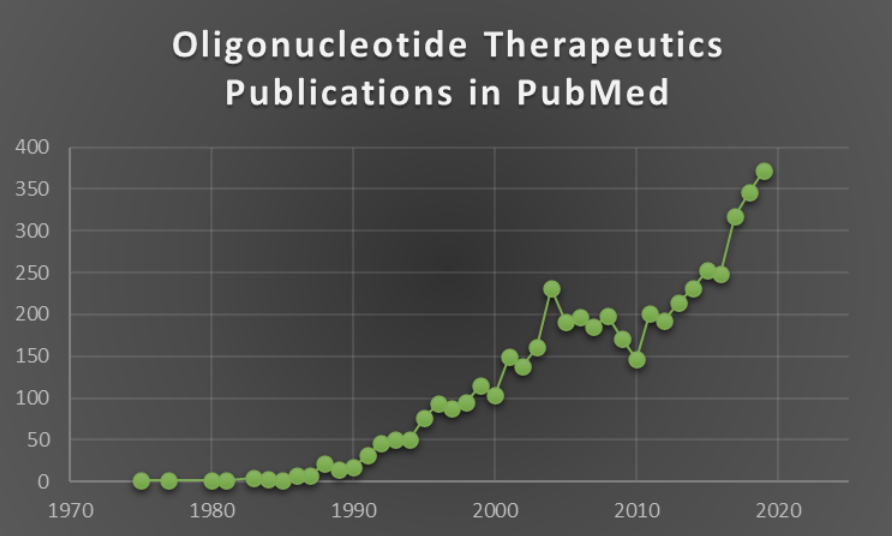 found in PubMed. Search and chart by Jerry Zon.

The 2020 OTS “meeting” took place from September 27 – 30. Due to the COVID-19 pandemic, it was a virtual conference, but more than 1,000 participants from around the globe attended nonetheless. The online agenda was jam-packed with excellent science, just as in past years, and the audio and video logistics were outstanding. Through lectures, short talks, and posters, a wide diversity of topics was covered. Various categories of awards were presented, and there were convenient links to corporate sponsor websites, including TriLink.

This blog provides a brief synopsis of selected highlights from this content, along with comments or impressions by the Zone. Readers interested or involved in any aspect of oligonucleotide therapeutics who are not yet members of the OTS are encouraged to join and gain access to OTS newsletters, networking opportunities, and future annual meetings.

Among more than 40 lectures, the Zone selected the enzymatic synthesis of oligonucleotides (ESO) for discussion, based on its novelty and potential future impact. ESO, which is a currently trending “hot topic,” is predicated on the use of 5’-triphosphate building blocks as potential replacements for, or adjuncts to, conventional chemical synthesis employing phosphoramidite monomers. While interest in ESO assembly (aka “writing”) of DNA is primarily driven by the hypothesis that it may enable future schemes for DNA-encoded data storage, the Zone is unaware of any reports on the enzymatic assembly of natural and/or modified RNA (modRNA) for therapeutic investigations. For these reasons, the ESO-based assembly of RNA/modRNA described by Jonathan Rittichier, who works with uber-famous George M. Church at Harvard Medical School, Boston, MA, was especially interesting. Briefly, their approach is as follows.

Poly(A) polymerase, which normally adds the poly(A) tail to mRNA, was subjected to mutagenesis to obtain mutants that were then screened for the ability to polymerize A, G, C, and U, ideally in an unbiased manner, i.e. with equal efficiency. A mutant enzyme with this capability was found, and it was also shown to incorporate 3’-O-allyl ribonucleotide 5’-triphosphates, which by design are incapable of 3’-extension, thus leading to “N+1” extension of a support-bound RNA acceptor strand.

Chemical removal of the allyl blocking group gives a 3’-OH for a second cycle of extension to form the “N+2” product. This stepwise extension process can then be repeated. HPLC-MS analysis showed that the approach was successfully used to produce a 10-mer mixed-base RNA, following cleavage from the support using an endonuclease. In addition, the methodology was said to have been applied to incorporation of 3'-O-allyl-protected nucleotide 5’-triphosphates (NTPs) with either 2'-fluoro (F), 2’-O-methyl (2’-OMe), or α-thio moieties to yield modRNA comprised of 2’-F or 2’O-Me ribonucleotide moieties or phosphorothioate (PS) linkages, respectively.

The Q&A session was full of congratulatory remarks, and there were good questions about experimental details and future prospects. For example, in response to a question about whether the engineered enzyme has been tried with other 3'-O-blocked reversible terminators, such as those with 3'-hydroxyamine (ONH2) or 3'-O-azidomethyl (CH2N3) moieties (shown here), the answer was “[y>

es, we tried other versions of the reversible terminator groups.

We have a whole bunch in the development pipeline.” As for the length of RNA possible by ESO, mirroring what occurs naturally may be feasible i.e. “oligo extension of >1000-nt with uncontrolled RNA synthesis.” In response to a question about chemical selectivity of the mutant polymerases, it was said that they “can incorporate a pretty big array of different bases including RNA, LNA, and DNA sugars at varying efficiencies without the enzyme being too picky.” Finally, a question about the coupling efficiency was answered by saying that “[t>

he coupling rates for all 4 reversible terminators are very similar, at about >98% per step.”

The Zone is continually amazed by the progressive evolution of oligonucleotide constructs. These are not only investigated with the goal of improving the efficiency of either uptake, avidity of hybridization, nuclease resistance, etc., but also with the hope of expanding the mechanisms of action, including antisense knockdown of RNA, modulation of RNA splicing, CRISPR, and more. For these reasons, the Zone was quite intrigued by reports on the development of yet another new class of antisense oligonucleotides (ASOs), namely, double-stranded ASOs with an overhanging duplex oligonucleotide, termed ODO, depicted here.

One of 25 short talks, this approach was presented by Kotaro Yoshioka at Tokyo Medical and Dental University, Tokyo, Japan. The ODO is comprised of the ASO strand (top) and its chimeric complementary RNA strand (bottom) with an overhanging region. The ASO is an LNA (L)-DNA (D)-LNA (L) gapmer that is fully modified with phosphorothioate (PS) linkages (red). The chimeric complementary RNA (R) has phosphodiester (PO) linkages (blue) and is modified with PS-linked (red) 2’-O-methyl (2’-OMe) (m) moieties on one end, and a PS-linked DNA (D) overhang.

Compared to the parent single-stranded ASOs, systemic injections of ODOs in mice were found to be able to silence target mRNAs more efficiently in multiple tissues, including lung, intestine, and lymphocytes. Interestingly, this high potency is associated with the circulatory iron-carrier protein transferrin and its efficient cellular uptake mediated by the transferrin-receptor. 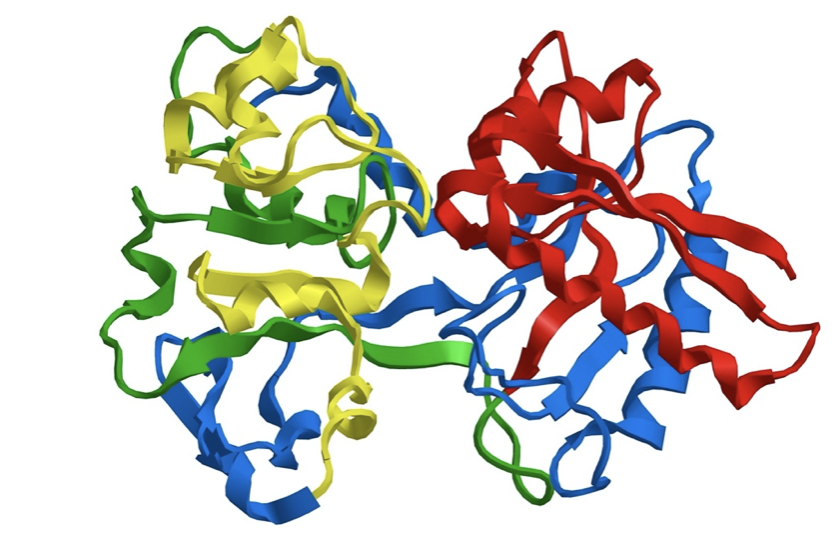 Ribbon-form depiction of the molecular structure of human serum transferrin, a blood-plasma glycoprotein that plays a central role in iron metabolism and is responsible for ferric-ion delivery. Transferrin transports iron through the blood to various tissues such as the liver, spleen, and bone marrow.

A structure-activity study using PS-DNA overhangs with gapmer “wings” comprised of either LNA, 2’-OMe, or 2’-O-methoxyethyl (2’-O-MOE) moieties revealed that only the LNA gave statistically significant improvement in tissue accumulation and knockdown efficiency, albeit modestly.

Interestingly, a second ASO sequence was incorporated into the overhang-portion of an ODO to induce dual-silencing by the two ASOs in one ODO construct, as depicted here. Although this novel approach led to only a modest increase in knockdown efficiency in mice, hepatic toxicity was greatly reduced compared to hepatic toxicity in the corresponding two single-stranded ASOs.

As with the aforementioned ESO talk, there was much praise offered during the Q&A, and good questions on the dual-silencing construct. For example, Steve Dowdy, a member of the scientific organizing committee, asked “does the DNA separate from the second ASO or remain attached (and inert)?” The reply was “when we investigated the processing of the complementary strand, the duplex-forming portion in the complementary strand was cleaved and degraded within cells so that the overhanging portion (as well as the second ASO) could get free from the duplex intracellularly.” Another participant asked whether these artificial ODOs trigger immune response, such as activation of toll-like receptors (TLRs). Dr. Yoshioka replied that “[w>

hen we assessed inflammatory responses in FAD-model mice using toxic ASOs, the cytokine responses with ODO were less induced than those with [a>

mixture of single-stranded ASOs. But I hope to check species differences of cytokine effects, as well as TLRs between rodent and primate.”

Reliable detection and quantification of ASOs in experimental and clinical specimens is essential to understanding the biological function of these novel therapeutics, and will help speed up the drug development process. Over the past couple of decades, there have been numerous publications of methods for quantification of ASOs by means of either HPLC-MS, PCR, or sequencing. These, like any analytical method, have advantages and disadvantages. Consequently, there continues to be interest in developing new methods with more advantages and fewer disadvantages.

For these reasons, among the nearly 100 posters, the Zone was very impressed by one titled Method for Quantification of Antisense Oligonucleotides with an Enzymatic Ligation-Based Quantitative Polymerase Chain Reaction by Minwook Shin at the University of Massachusetts Medical School, Worcester, MA. After this selection, the Zone was gratified to learn that this poster won one of the 2020 Poster Awards.

Shin et al. developed a novel method for the detection of ASOs through enzymatic probe ligation and quantitative polymerase chain reaction (qPCR) detection using two ligation probes (Probe A and Probe B) comprised of oligo-binding (OB), linker, and primer binding (PB) sequences, as depicted here. The OB sequences of Probe A, Probe B and adjacent DNA sequences are hybridized to the DNA or RNA target ASO (Oligo). In the resultant Oligo-splinted duplex, the adjacent 5’-phosphate and 3’-OH groups of DNA Probes A and B, respectively, are then covalently joined using a commercially available ligase (SplintR). Ligation is followed by conventional fluorogenic qPCR, using forward and reverse primers with a quenched probe. 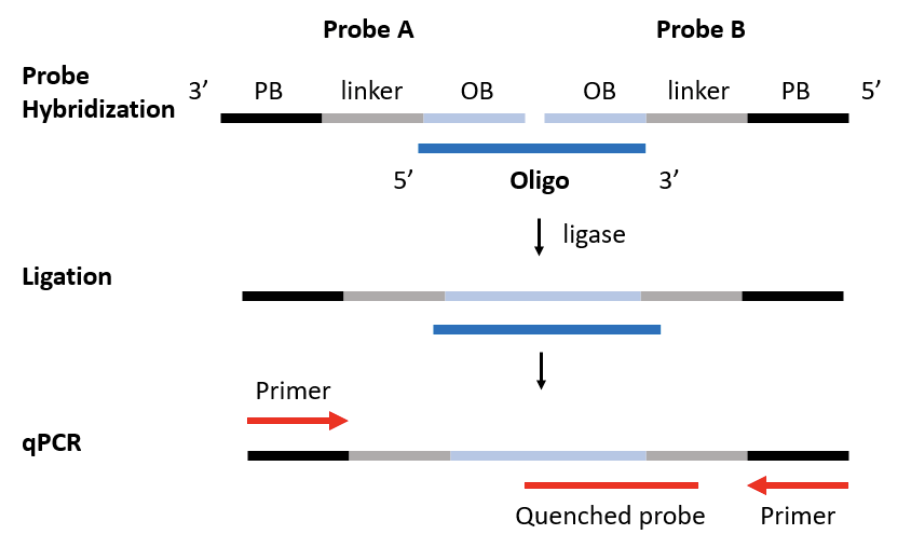 Scheme for ligase-mediated qPCR of an RNA or DNA ASO (Oligo). Drawn by Jerry Zon.

ASO quantification was validated in water, and further performed in different types of samples from mice previously injected with an ASO, namely, serum, liver, kidney, lung, heart, muscle, and brain. Using this method, a 1 pM level of 2’-OMe gapmers was detected, with a dynamic range of seven orders of magnitude in serum. Shin et al. were able to quantify various types of modified ASOs, including PS linkages, 2'-OMe, 2'-O-MOE, and LNA, as well as siRNAs. Moreover, this technique was able to detect and quantify ASOs in liver, kidney, lung, heart, and muscle with a broad linear range, typically 6 logs. Importantly, this enzymatic ligation-based qPCR method for detection and quantification of ASOs does not need any specially modified probes, and only uses standard laboratory equipment; making it a fast, sensitive, and reliable novel technique to detect therapeutic ASOs in different biological samples.

During the Q&A session, there were good questions about other ligation enzymes and possible sequence-dependencies. In reply, it was said that T4 DNA ligase and HiFi Taq DNA ligase were tested, but SplintR ligase performed best. However, for each ASO of interest, a systemic assessment of the influence of sequence is needed to evaluate optimal sensitivity. It was also mentioned that a manuscript on this method was underway.

Stereochemistry of a phosphorothioate (PS) linkage. Taken from wikimedia.org and free to use.

As someone involved in the early investigations of the automated synthesis of nuclease-resistant PS-modified oligos as possible ASOs, it is personally gratifying to see the continued use of PS linkages in many of the applications reported during the 2020 OTS meeting. These PS-enabled applications now involve diverse mechanisms that span traditional mRNA knockdown to state-of the art CRISPR-based gene editing. Throughout this evolution, the influence of Rp vs. Sp stereochemistry of PS linkages in oligonucleotides has been fascinating.

The relatively recent advent of Wada’s efficient synthetic methodology for the stereoselective introduction of either an Rp or Sp linkage anywhere in an oligonucleotide has led to the systematic evaluation of this stereochemistry on various aspects of PS-modified oligonucleotide therapeutics. Ionis Pharmaceuticals has already published such investigations [see Seth and coworkers (2020) and references cited therein>

Briefly, the ADAR (adenosine deaminases acting on RNA) family of enzymes catalyze adenine (A) to inosine (I) changes in coding and non-coding sequences throughout the transcriptome. Because inosine (I) is read as guanine (G) by the translational machinery, oligonucleotide-directed ADAR-mediated RNA editing has the potential to revert disease-causing mutations through a variety of molecular mechanisms, including protein restoration, gene silencing, altered splicing, and protein alteration. Shivalila et al. explored PS stereochemistry on the activity of RNA-editing oligonucleotides using a dual-luciferase reporter system in vitro.

Stereopure oligonucleotides were found to direct endogenous ADAR enzymes to edit endogenous transcripts in vitro more effectively than stereorandom oligonucleotides. It was concluded that these preclinical investigations lay the foundation for stereopure RNA-editing therapeutics with the potential to treat human genetic disease.