In April 2013, in my second ever blog, DNA G-quadruplexes (GQs) were featured as a then trending hot topic in nucleic acid research, following a report in Nature Chemistry of the first visualization of these DNA structures in human cells. That published work, led by University of Cambridge Prof. Shankar Balasubramanian, has been cited nearly 2,000 times. This puts it in the 99th percentile (ranked 160th) of the 309,600 tracked articles of a similar age in all journals, according to an Altmetric score. 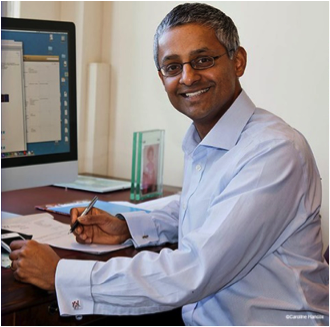 The aforementioned 2013 blog includes an interview with Prof. Balasubramanian, who was knighted in January 2017 in part for that pioneering work. Although somewhat akin to GQs, iM DNA has eluded detection in vivo until now. Aussie researchers have visualized iM DNA for the first time, as described in an April 2018 publication in Nature Chemistry. Following my brief synopsis of these new findings, Sir Shankar was kind enough to share some additional perspectives on iMs with us for discussion.

DNA is well-known to adopt alternative non-B-form conformations in vitro, including GQ (aka G4) and iM structures, which are depicted here in a figure taken from the aforementioned Nature Chemistry report in 2018 by the Aussie team of Zeraati et al. Of the two structures, GQ DNA formed within guanine (G)-rich regions of the genome is by far the more studied. In spite of extensive bioinformatic and in vitro characterizations of GQs, the in vivo existence of GQs in human cells remained speculative until the visualization of these structures by Sir Shankar’s team. The team used an antibody fragment that recognizes GQs (shown in red) in a structure-specific manner.

In marked contrast, insights into the biological role of iM DNA are limited. This structure is formed via a stack of intercalating hemi-protonated C—neutral C base pairs (shown in green), which are stabilized at a slightly acidic pH. As C-rich regions are common within the human genome and can occur opposite G-rich regions (hence the interconversion arrows in the figure), iMs have been characterized in vitro using a range of biophysical techniques. These analyses demonstrated the formation of both intramolecular (as depicted in the figure) and intermolecular structures, with the overall stability of the structure dependent on the number of Cs in the iM core, as well as the length and composition of the loops.

However, the in vivo existence of this four-stranded iM DNA structure in the human genome has been a matter of scientific debate. In particular, observations that in vitro formation of the iM structure is dependent on acidic conditions has led to questions concerning biological relevance. But now, as you’ll read in what follows, such doubt about the biological relevance of iM DNA has been countered by compelling evidence in support of the in vivo existence of iM DNA, and suggestions of regulatory roles for iM DNA in the genome.

The recent publication by Zeraati et al. should be read in its entirety to fully appreciate the methodology used to isolate an iM-specific antibody fragment for the study of iM structures in vitro and in vivo. Briefly, three rounds of phage-display selections were performed to isolate iM DNA-binders. The binders were then initially characterized using soluble fragment enzyme-linked immunosorbent assay (ELISA). This was followed by evaluation of the bio-layer interferometry (BLI) off-rate ranking, resulting in the identification of a lead candidate, which was termed iMab.

Further ELISA analyses revealed highly specific binding, as indicated by the absence of iMab binding to a wide range of control proteins and nucleic acids, including double-stranded DNA, hairpin DNA, and microRNA. To investigate whether iMab is capable of binding to partially folded iM structures, Zeraati et al. tested truncated constructs with either three or two tandem runs of Cs. The two truncated constructs displayed either considerably reduced binding (three C-runs) or no detectable binding (two C-runs), indicating that recognition by iMab is highly dependent on the folded structural framework of C-containing DNA.

The pH-dependence of iM stability and iMab binding was investigated because iM structures are considered most stable at acidic pH, reflecting the requirement for the formation of hemi-protonated C—neutral C base pairs (see above). Zeraati et al. thus hypothesized that pH and the binding of iMab should be inversely correlated, assuming that the antibody predominantly recognizes folded iM rather than unfolded species. Using BLI and a constant concentration of iMab binding to an iM structure, it was found that the iMab-iM complex antibody formed at pH 6, and could be readily dissociated when switching to pH 9 buffer conditions.

Zeraati et al. reasoned that iMs and GQs could display common epitopes, i.e. a specific piece of DNA to which iMab binds. Moreover, in genomic DNA, iMs are often accompanied by complementary G-rich sequences, which can adopt GQ structures as depicted above. For applications such as visualization by immunostaining, a high level of specificity and the absence of binding to GQs is therefore important. To evaluate iMab cross-reactivity, Zeraati et al. examined binding to six GQs of known structures, which were selected to represent a diverse range of conformations. ELISA results showed that iMab does not display any detectable binding to these molecules, suggesting that it is highly capable of differentiating between GQ and iM structures.

The studied presumptive negative controls included commercially available GQ antibody BG4, which was initially described by Sir Shankar and coworkers in Nature Chemistry as noted above. BG4 showed substantial binding to all analyzed GQ structures, as expected; however, BG4 also displayed detectable cross-reactivity to iMs and competed with iMab for binding to several iMs. Given the potential complications that could result from BG4 cross-reactivity with iMs, independent confirmatory investigations are needed to address the nature and scope of this putative cross-reactivity reported by Zeraati et al.

iM Structures are Formed in the Nuclei of Human Cells

Zeraati et al. used iMab for indirect immunofluorescent staining of three different human cell lines. This staining revealed punctate foci in the nuclei of MCF7, U2OS and HeLa cell lines that were dependent on the presence of iMab, as shown here for MCF7 cells. In addition, DNase I treatment significantly decreased the number of foci in the nuclei, presumably due to nuclease-resistant DNA structures or shielding by proteins. Zeraati et al. speculated that another possibility was the formation of iM RNA structures that are not removed by DNase I digestion. A small decrease in the number of iMab foci after RNase A treatment supported this speculation.

Zeraati et al. examined how the formation of iM structures is affected by pH in the following way. As depicted here, H2O and CO2 react to form carbonic acid, H2CO3. Consequently, intracellular pH is inversely correlated with the concentration of CO2 in a cell culture system.

These investigators hypothesized that they could study the effect of pH on iM formation by changing the CO2 concentration. MCF7 cell cultures were incubated at 5% CO2 until they reached ~70% confluency and then placed in 2%, 5% or 8% CO2 incubators for a further 2.5 h. From the box-and-whiskers plot shown here, staining with iMab led to observation of a relatively small but statistically significant increase in the numbers of foci with increasing CO2 concentration. As expected, measurements of pH in the MCF7 culture medium indicated an inverse correlation with the CO2 concentration. In view of the relatively small lowering of pH, it seems to me that iM structures are quite sensitive to pH changes in cell culture solution. 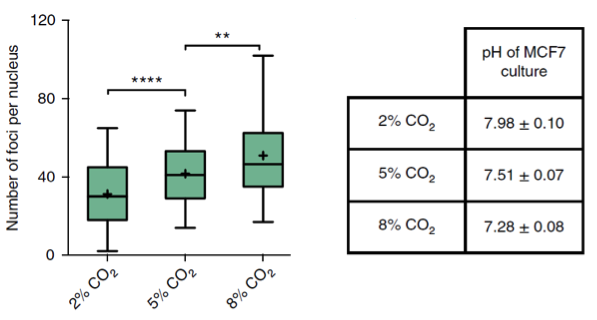 As depicted here, the human cell cycle consists of four distinct phases: G1 phase (growth; cells increase in size), S phase (synthesis; DNA replication), G2 phase (growth and preparation for mitosis, i.e. cell division) and M phase (mitosis). M phase is composed of two tightly coupled processes: karyokinesis, in which the cell's chromosomes are divided, and cytokinesis, in which the cell's cytoplasm divides forming two daughter cells. Activation of each phase is dependent on the proper progression and completion of the previous one. Cells that have temporarily or reversibly stopped dividing are said to have entered a state of quiescence called G0 phase.

To investigate whether iM formation is affected by cell-cycle progression, Zerati et al. used the iMab antibody to stain HeLa cells synchronized at G0/G1, G1/S boundary or early S phase. As shown here, they observed the minimum number of foci at the G0/G1 phase and the highest number of foci at G1/S boundary phase. When the cells synchronously began (early) S phase, the number of iMab foci was reduced compared to the G1/S boundary phase. Similar trends of iM formation during cell-cycle progression were observed in the MCF7 cell line. 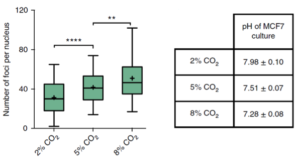 Rather than paraphrase Zeraati et al., here are some salient statements taken from the discussion section:

As mentioned in the introduction, Sir Shankar kindly provided these perspectives on the report by Zeraati et al.:

is a nice study that adds to the emerging view that DNA secondary structure is more interesting and dynamic than was thought a few decades back.  The results of the study would seem to counter the view that the pH-dependence iMs makes them unlikely to form.  Previous studies have suggested iMs may play roles that are distinct from those proposed for GQs and there is a subtle indication of this from the differences observed in the cell-cycle dynamics of iM, which seem to be most abundant at M1/S and not S-phase, as compared with GQs that max out during S-phase.  As next steps it will interesting to further probe when and where iMs form in the genome and the potential links between iM and function.”

I thank Sir Shankar for his willingness to share his thoughts here and, as usual, I welcome your comments.

While researching literature for this blog, I became curious about evidence for coexistence of GQ and iM structures in the same region of DNA. One such publication by Chen et al. reports the following: 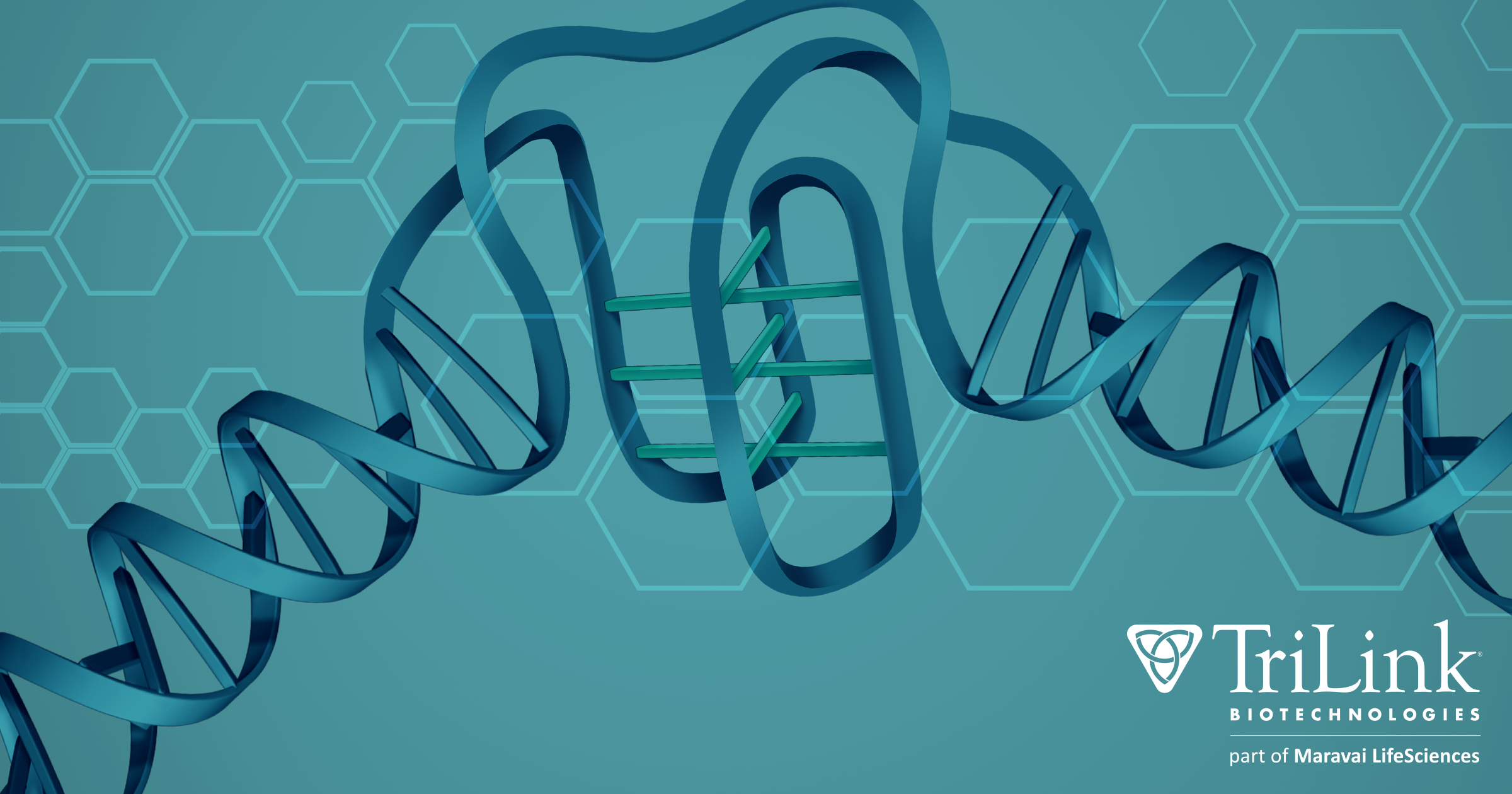