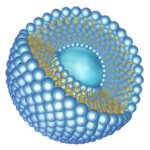 3D illustration of an empty LNP (aka liposome).

In some of our previous blogs, we have featured a variety of publications on lipid nanoparticles (LNPs; aka liposomes) for delivery of therapeutic nucleic acids such as siRNA or mRNA. These and other studies generally involve the empirical screening of a limited number of LNP formulations in vitro, in order to identify the best performing LNP composition. By contrast, in what I view as a “breakthrough article,” Sago et al. have recently reported a high-throughput screening methodology that can identify LNPs with novel cellular tropisms in vivo. They demonstrate this by utilizing LNPs for delivery of functional mRNAs to endothelial cells, a therapeutically important cell-type group that is distinct from hepatocytes, which generally take up LNPs.

The biggest challenge for realizing the therapeutic potential of nucleic acids is safe and effective delivery vehicles for human use. Among nucleic acid compositions comprised of lipids and lipid analogs, LNPs have been extensively studied in vitro and in vivo. Nonetheless, rational design of these vehicles is lacking. Consequently, empirical screening is used, but due to its relatively slow and laborious nature, this approach limits the number of formulations tested, i.e. screened.

Chen et al. have previously investigated this problematic bottleneck by developing a 24-channel microfluidic method that allows for parallel preparation of short-interfering RNA (siRNA)-containing LNPs (aka lipoplexes) for a large number of components such as cholesterol, poly(ethylene glycol)-conjugated lipids, and phospholipids. This method allows researchers to obtain formulations with the desired biophysical and pharmacokinetic attributes, as shown here.

Chen et al.’s approach has now been extended and enhanced by Sago et al. as a system named Fast Identification of Nanoparticle Delivery (FIND). This method measures cytosolic mRNA delivery by hundreds of LNPs in vivo to any combination of cell types. In the following sections, I will briefly outline various applications of FIND, and how this system was able to quantify how >250 LNPs functionally delivered mRNA to multiple cell types in vivo. Through these processes, two formulations that deliver RNA to endothelial cells were identified. These are especially interesting, as dysfunctional endothelium causes more diseases than any other cell type.

LNPs that met size and stability criteria were screened in vitro, which led to 112 LNPs for further evaluation. Of these, 71 were pooled together and administered to previously described Cre-reporter mice, wherein Cre-reporter cells fluoresce if Cre mRNA is translated into Cre protein, which then translocates to the nucleus and edits target DNA. Cell types of interest were separated by fluorescence-activated cell sorting (FACS) in order to generate an in vivo delivery heatmap, as shown here. Unformulated (aka naked) DNA barcode, which should not be delivered as efficiently as DNA barcodes in LNPs, was included as a negative control. Mice were i.v. injected with the pooled LNPs at a 1.5 mg/kg total mRNA dose (average dose 0.021 mg/kg per particle). Three days later, lung and kidney endothelial cells were FACS-selected.

Due to the technical complexity of these and many additional experiments, interested readers can consult Sago et al. for details. The remainder of this blog will focus on proof-of-concept results for CRISPR-mediated gene editing using LNP delivery of Cas9 mRNA and single-guide RNA (sgRNA) in endothelial cells.

FIND-Derived LNPs for In Vivo Gene-Editing in Endothelial Cells

After completing the aforementioned in vitro and in vivo validation experiments, Sago et al. further optimized two selected LNPs named 7C2 and 7C3. Mice constitutively expressing SpCas9 were injected three times with 7C2 or 7C3 carrying 1.5 mg/kg of two chemically modified sgRNAs each, with three PS linkages on the 5’ and 3’ ends (custom synthesis by TriLink BioTechnologies) targeting ICAM2 (sgICAM2ab) (1:1 mass ratio). Separately, C57BL/6J mice were injected two times with 2 mg/kg with 7C2 and 7C3 formulated to carry both SpCas9 mRNA and sgICAM2ab at a 3:1 mass ratio. I am very pleased to say that sgICAM2ab and SpCas9 mRNA were obtained from TriLink, with the SpCas9 mRNA being comprised of CleanCap™, as well as 5moU-modified ribonucleotides shown here.

Five days after the last injection, tissues of interest were isolated, and ICAM2 protein expression was measured concurrently as ∼20,000 cells were sorted. Sago et al. state two interesting observations: first, in contrast to accompanying small RNA delivery experiments, 7C3 outperformed 7C2, and second, splenic endothelial cells were targeted efficiently (Panel B). Given that this degree of selectivity has not yet been reported to date, Sago et al. repeated the experiment using additional groups of mice over the course of several months. The 7C3 delivered Cre mRNA to splenic endothelial cells in every experiment (Panel C). 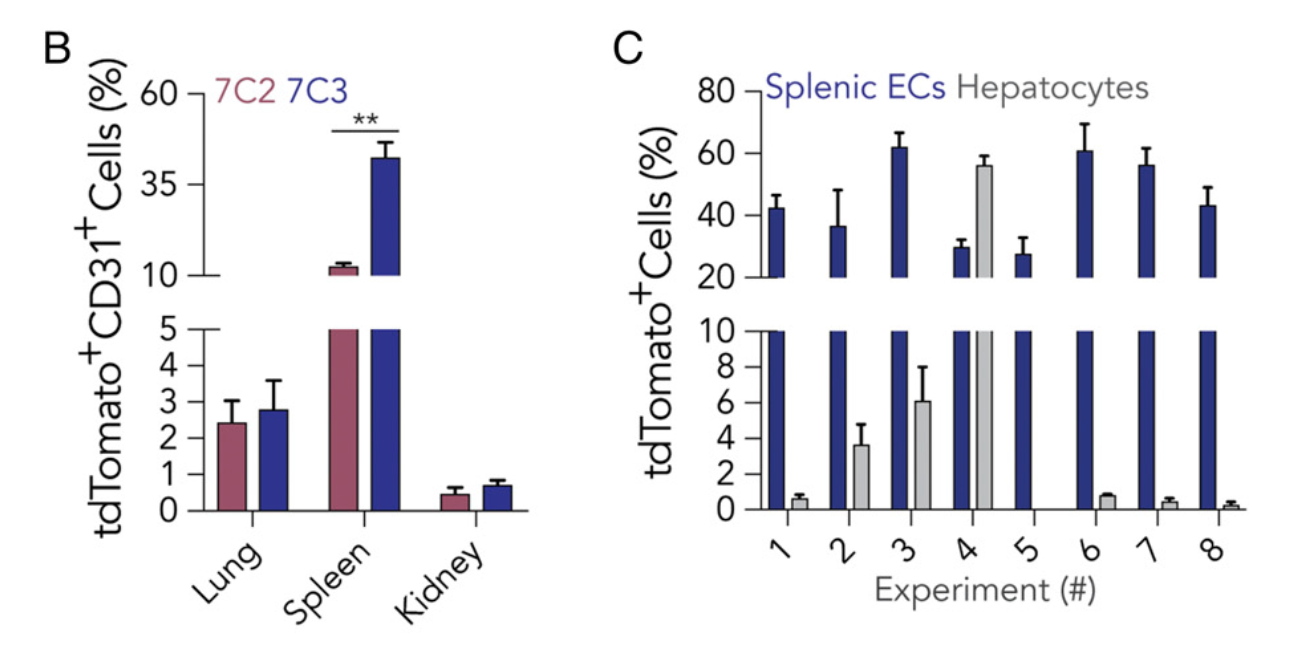 According to Sago et al., the differences in delivery between 7C2 and 7C3 provide interesting preliminary evidence that suggests changing the composition of helper lipids added to a given ionizable amine can alter tropism, i.e. the type of tissue/cells that take up LNPs loaded with nucleic acids.

FIND is a high-throughput method for quantification of functional mRNA delivery mediated by LNPs. Sago et al. state that the distinction between biodistribution and functional delivery is significant: >96% of delivered RNA does not escape the endosome, and endosomal escape may vary with cell type or disease state, making it hard to predict functional delivery using biodistribution. Notably, Cre mRNA must be translated in the cytoplasm, translocate into the nucleus, and edit target DNA.

Although the aforementioned studies focused on endothelial cells, Sago et al. state that “FIND is agnostic to cell type; [they>

envision FIND studies that identify LNPs targeting other cells.” This agnosticism also applies to the type of nucleic acid being delivered, as depicted here for an antisense oligonucleotide (ASO), siRNA, mRNA, and sgRNA. 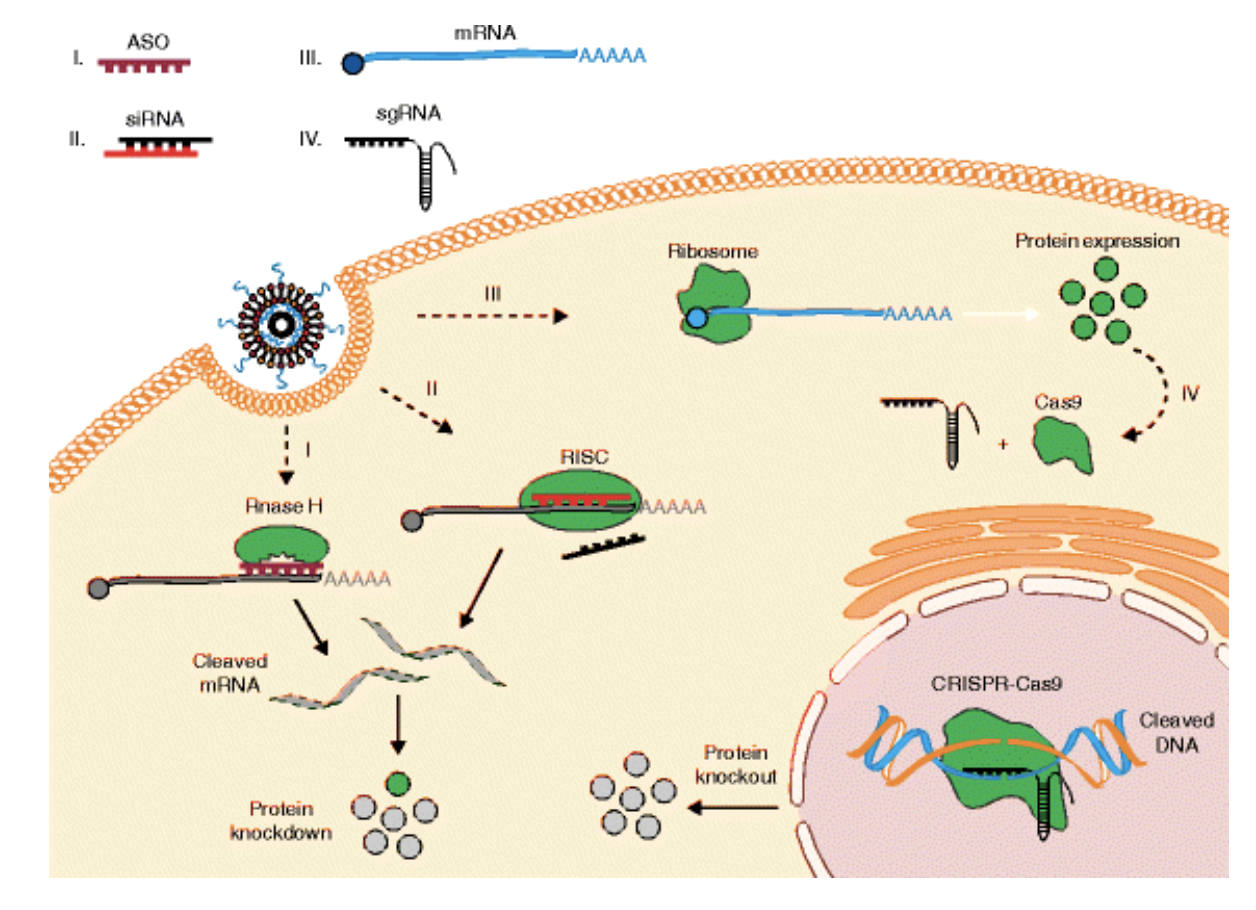 Given that on- and off-target cells can be isolated from the same mouse, FIND may also be used to identify (or iteratively evolve) LNPs with high therapeutic windows, i.e. effective doses vs. toxic doses. To further increase the ratio of splenic endothelial cell to hepatocyte delivery, one may decorate LNPs with reported endothelial-cell-targeting ligands.

Rather than paraphrase Sago et al., here is their long-term vision for the future for FIND:

“More generally, this ability to study how hundreds of LNPs target combinations of cells in vivo may elucidate relationships between LNP structure and in vivo functional delivery. In this case, FIND enabled us to quickly identify two lead LNPs. Here we delivered sgRNAs targeting the inflammation-related gene ICAM-2. However, the long-term utility of FIND will be defined by its ability to identify nanoparticles for in vivo gene editing more efficiently than the current gold standard, which is in vitro screening.”

I agree with this opinion, and also believe that FIND represents yet another example of what I refer to as ‘seek, and ye shall find’ in a previous blog.