The 12th Annual Meeting of the Oligonucleotide Therapeutics Society (OTS) held on September 25-28, 2016 in French-speaking Montreal, Quebec, Canada brought together hundreds of enthusiastic investigators from around the world. All attendees share a common interest in oligo-based therapeutics, and we gratefully say merci beaucoup to the organizers of this very well run event.

Commenting here on my “favs” is limited by space, and highly subjective—by intent—focusing on only several impressions that struck me as worth sharing. Readers interested in perusing all of the lecture titles and speaker biosketches can do so at this link, which also lists corporate sponsors—including TriLink—and connects with the regularly updated OTS website. 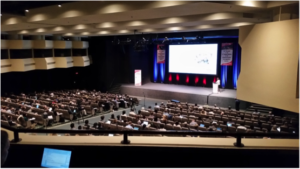 Before getting to my selected topics, I wish to congratulate the OTS Board of Directors and Scientific Advisory Council for their ongoing valuable contributions to this society, and continuing efforts to include participation by the new generation of young investigators, who I’m sure will collectively make exciting advances in the field of oligonucleotide therapeutics. It was pleasure for me to me meet some of these “next gen” scientists, and learn about their current work, which is quite sophisticated by comparison to what I and others did in the early—dare I say primitive—era of antisense oligonucleotide drug discovery.

Preeclampsia (PE) is a disorder that occurs during pregnancy, affects both the mother and the fetus, and is characterized by elevated blood pressure, swelling and protein in the urine. According to a Preeclampsia Foundation fact sheet, every minute somewhere in the world a woman dies in pregnancy or childbirth, which amounts to more than 500,000 deaths each year. In addition, PE causes ~15% of premature births in industrialized countries and is the number one reason doctors decide to deliver a baby early. 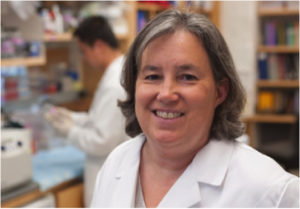 Dr. Melissa J. Moore is a professor in the RNA Therapeutics Institute and the Department of Biochemistry and Molecular Pharmacology at the University of Massachusetts Medical School. Taken from hhmi.org

In her OTS lecture on clinical development of an RNA interference (RNAi) approach to treat PE, Dr. Melissa J. Moore (pictured below) introduced an attention-grabbing personal element when she revealed her bout with PE. Coincidentally, she discovered that her then attending physician, Dr. S. Ananth Karumanchi, had begun his quest for identifying PE-causality at the molecular level prompted by his daughter’s dangerously premature birth due to PE. This turned out to be a truncated kinase receptor abbreviated sFlt1, which Moore described as Karumanchi’s break-through discovery for possible development of PE therapeutics.

The condensed version of these two remarkably interwoven, PE-related personal stories—that you can hear first-hand from Moore on YouTube—was an agreement between Moore and Karumanchi to collaborate on discovering whether double-stranded short-interfering RNA (siRNA) targeting sFlt1 could be useful as an RNAi-based PE therapeutic agent. 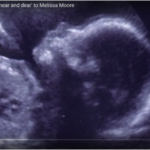 Moore went on to gratefully acknowledge her colleague at the RNA Therapeutics Institute, Prof. Anastasia Khvorova, for setting up “by hook or by crook” the first non-profit academic facility for large-scale production of siRNA suitable for clinical development. This led to designing and producing a nuclease-resistant siRNA comprised of 2’-OMe/2’-F ribonuceosides and phosphorothioates at the ends, with an attached hydrophobic cholesterol moiety for improved delivery.

Even more impressive—at least to me—was Moore’s ability to access pregnant baboons in a non-human primate model of PE. This is inherently difficult due to issues involving non-human primates for any research, and is technically much more challenging compared to, for example, infectious disease models. Dr. Moore showed lots of compelling results from her model studies, and concluded her talk by saying that clinical studies were planned. 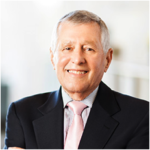 This year’s OTS Lifetime Achievement Award address by Dr. Stanley T. Crooke, founder and CEO of Ionis Phamaceuticals (formerly Isis Pharmaceuticals), was presented to an auditorium packed with attendees who, like me, greatly admire Crooke’s many scientific and commercial contributions to the field over the past decades. These currently include more than 450 (!) scientific publications and 38 drugs in the pipeline, with 3 finishing Phase III—very impressive and promising indeed!

Ionis’ impact on providing efficacious oligonucleotide-based therapies to patients was conveyed most powerfully—in my opinion—by a video about Cameron, an infant SMA patient who was born with Spinal Muscular Atrophy (SMA). According to an NIH fact sheet, SMA is a genetic disease that causes weakness and wasting of the voluntary muscles in the arms and legs of infants and children. These disorders are linked to an abnormal or missing gene known as the survival motor neuron gene 1 (SMN1), without which motor neurons in the spinal cord degenerate and die.

As detailed elsewhere by Chiriboga et al., Nusinersen (aka ISIS-SMNRx or ISIS 396443) is a 2’-O-(2-methoxyethyl) (MOE) phosphorothioate-modified antisense oligonucleotide (ASO) designed to alter splicing of SMN2 mRNA and increase the amount of functional SMN protein produced, thus compensating for the genetic defect in the SMN1 gene. The cartoon shown below depicts how this ASO targets an hnRNP-A1/A2–dependent splicing silencer in intron 7 of the SMN pre-mRNA. Nusinersen displaces hnRNP proteins from this silencer site on the SMN2 pre-mRNA, facilitating accurate splicing of SMN2 transcripts (e.g., increasing the synthesis of transcripts containing exon 7) and resulting in increased production of full-length SMN protein. 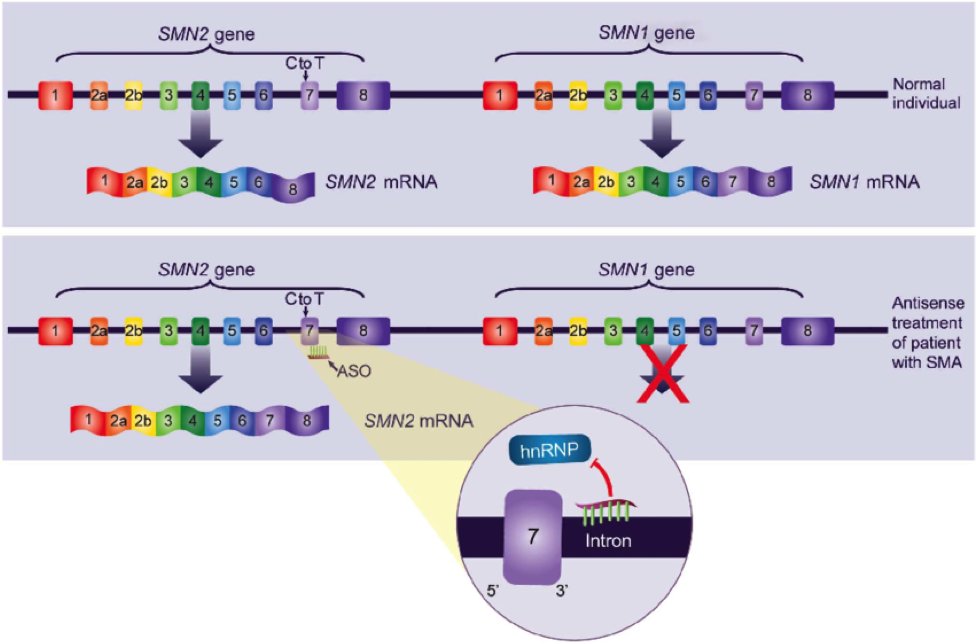 Ionis and its commercial partner Biogen announced in August 2016 that Nusinersen met the primary endpoint pre-specified for the interim analysis of ENDEAR, the Phase 3 trial evaluating Nusinersen in infantile-onset (Type 1) SMA. The analysis found that infants receiving Nusinersen experienced a statistically significant improvement in the achievement of motor milestones compared to those who did not receive treatment. In September, Biogen announced that it applied for Priority Review by the FDA that, if granted, would shorten the review period of Nusinersen following the Agency’s acceptance of the NDA filing by Ionis and Biogen. 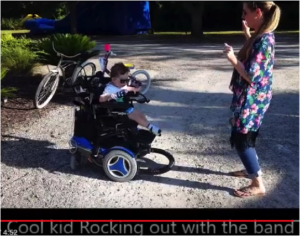 Cameron at 2+ years enjoying the moment with his mom. Taken from YouTube

The amazing effect of Nusinersen warranting this Priority Review is best appreciated—in my opinion—by watching a YouTube video showing the progress of Cameron during his treatment. When viewing this video, keep in mind that Cameron’s Type I SMA is typically evident at birth or within the first few months, and that symptoms include floppy limbs and trunk, feeble movements of the arms and legs, swallowing and feeding difficulties, and impaired breathing. Sadly, the prognosis is poor for babies with SMA Type I. Most die within the first two years. But not so for Cameron, shown below at 2+ years, thanks to Nusinersen!

Phosphorothioate-Modified Oligonucleotides Continue to be Enabling—30 Years On! 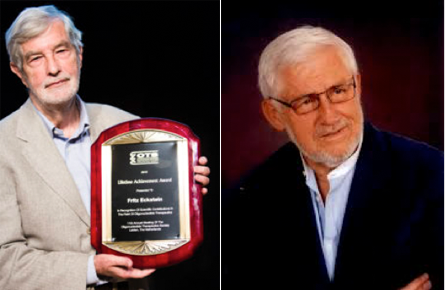 That nuclease-resistant phosphorothioate (PS)-modified internucleotide linkages have had an enabling influence on all manner of oligo-based drug development is evident from the first-ever OTS Lifetime Achievement Award in 2015 being given to Prof. Fritz Eckstein for his pioneering and life-long work on PS linkages in DNA and RNA. Following Fritz’s lead, and aided by the availability of ABI’s DNA synthesizer, Prof. Wojciech J. Stec and yours truly published the first completely automated method for synthesis of fully or partially PS-modified DNA oligos in 1984. This opened the door for early antisense experiments with PS-modified oligos, which have continued now for 30 years!

Perhaps surprisingly, the ever evolving field of oligonucleotide therapeutics continues to rely on PS-modifications in a myriad of mechanistically distinct strategies, such as “classic” antisense to mRNA, siRNA, anti-miRNAs, modulators of RNA splicing, etc. In this regard, Dr. Crooke’s concluding remarks on his goal of deciphering the “code” for protein binding to chemically modified ASO, led me to muse about the negatively charged P-S- moiety in such binding of PS-containing ASO. 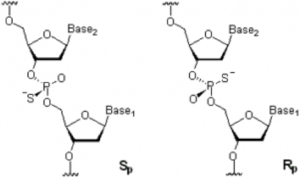 My initial thought was that P-S- likely enhances binding to positively charged amino acid moieties in proteins, due to greater polarizability vs. P-O-, and that Sp or Rp P-S- stereochemistry may likely influence binding. Moreover, this spatial aspect of a binding “code” can now be studied using stereospecific synthesis of PS-ASO by either Stec’s OTP method or Wada’s oxazaphospholidine method. Time will tell—stay tuned!