Several years ago, I posted a blog about long noncoding RNAs (lncRNAs), which are defined as non-protein coding transcripts in the range of ~200 nt to ~100 kb long. Interest in lncRNA—and other types of noncoding RNA such as microRNA (miRNA) and short interfering RNA (siRNA)—is fueled in large part by a collective scientific desire to uncover and understand the existence and function of all forms of RNA dark matter, so named by analogy to dark energy in cosmology. The lncRNA component of RNA dark matter is certainly generated from transcription of noncoding (formerly “junk”) DNA, but much has yet to be elucidated about function.

As depicted below, lncRNA (red) may act as (a) decoys to release proteins from chromatin, (b) scaffolds for grouping protein complexes, (c) guides to recruit proteins or (d) transcriptional enhancers by bending chromatin. Not shown is lncRNA acting as an antagonist for other regulatory noncoding RNAs, namely miRNA, which can be studied by next-generation sequencing methods such as TriLink’s CleanTag approach.

Numerical support for upward trending interest in lncRNA is provided by the chart shown here for the number of annual publications on lncRNA. This chart was produced by using data I found in PubMed for 2000-2016, which clearly show a relatively flat rate of ~150 papers per year from 2000-2007, and then an exponential increase to ~2,220 papers in 2016. 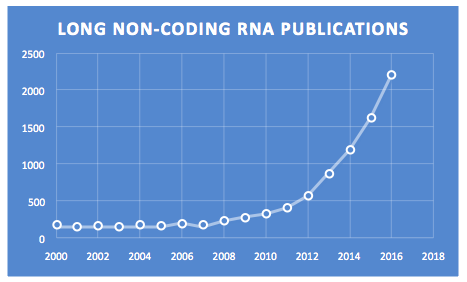 Although it’s not possible to say for sure what catalyzed this marked upturn in lncRNA publications, searching the 2005 literature in Google Scholar led to finding the following top-5 cited publications, which from titles alone could be likely scientific co-catalysts:

In any case, when I did keyword searches of the ~13,000 publications on lncRNA, roughly one-third (~4,700) were related to cancer, and many (~1,800) dealt with biomarkers primarily for (~1,400) cancer, but also including cardiovascular diseases, diabetes, epilepsy, general anxiety disorder, inflammatory bowel diseases, etc. Given that cancer is a major medical problem for all countries to deal with, and knowing that early detection of cancer by finding better biomarkers is critically important, this blog revisits lncRNA in the context of cancer and biomarkers.

At the risk of over simplification, advances in RNA sequencing (RNA-Seq)—enabled largely by high-throughput instrumentation from Illumina, PacBio, and Thermo Scientific—has revolutionized the field of molecular biology by revealing that up to ~75% of the human genome is actively transcribed, and that most of this transcriptome consists of lncRNA. Bioinformatic analyses, which are way beyond my expertise, have played a key role in sorting out lncRNA from mRNA and other RNA species. Interested readers can consult Cobos et al. as a recent lead reference to learn more about these bioinformatic methods.

Following are links to a constellation of additional experimental techniques that are available for exploring lncRN, and can be perused in detail later:

Although these methods are employed to shed light on lncRNA cellular localization, structure, interaction networks and functions, interested readers should consult a review by Salehi et al. and research paper by Goyal et al. for discussions of the advantages and disadvantages of these techniques. For example, Goyal et al. note that many lncRNA are derived from bidirectional promoters, or overlap with promoters, or bodies of sense or antisense genes. In a genome-wide analysis, they found only 38% of 15,929 lncRNA loci are safely amenable to CRISPR applications, while almost two-thirds of lncRNA loci are at risk to inadvertently deregulate neighboring genes. For several representative lncRNAs, it was found that CRISPR—but not RNAi by siRNA or antisense oligos—also affects their respective neighboring genes.

In closing this section on methods, readers who follow my blogs know that I’m a big fan of nanopore sequencing, about which I’ve commented in several previous posts. Oxford Nanopore Technologies has recently announced advances in its nanopore technologies that now allow sequencing of an RNA strand directly, rather than analyzing the products of reverse transcription and PCR reactions. My scientific “crystal ball” sees use of nanopore sequencing of lncRNAs in the not too distant future.

Long Noncoding RNA in Cancer and as Biomarkers

According to Bohla et al., lncRNAs are now known to function as regulatory factors for numerous, important cellular processes, such as growth, differentiation, and cell death. In addition, lncRNAs are involved in controlling alternative splicing, regulation of gene expression at the posttranscriptional level, chromatin modification, inflammatory pathologies, and—when deregulated—various types of cancer. Lnc2Cancer is a manually curated, interactive database of cancer-associated lncRNAs with experimental support that provides a high-quality and integrated resource for exploring lncRNA deregulation in various human cancers. In my opinion, Lnc2Cancer is definitely worth perusing.

The figure shown here indicates various types of cancers (black) for which lncRNAs (names of which are in green, blue or red) have been implicated. Searching PubMed or Google Scholar using any of the lncRNA names will provide a host of publications to peruse. 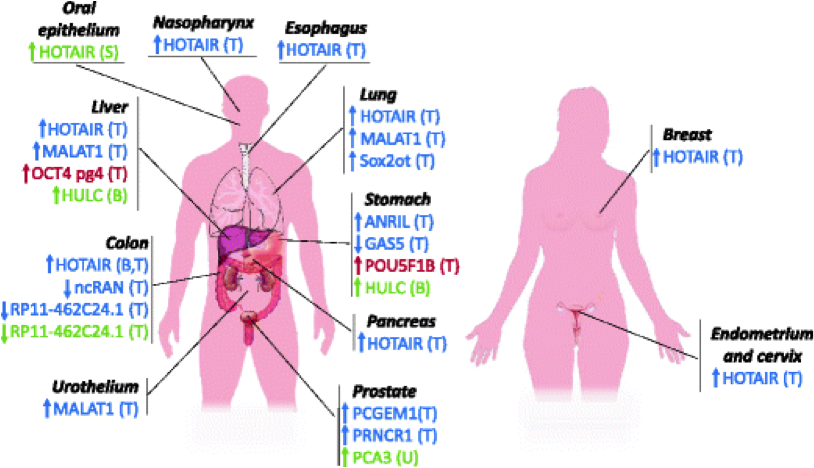 For example, searching PubMed for the term “HOTAIR” gives ~475 publications, in chronological order starting with the most recent. By contrast, searching Google Scholar for the terms “HOTAIR lncRNA” gives ~6,100 articles ranked by “relevance,” which is explained elsewhere as being heavily influenced by citation frequency. Readers interested in more details can consult Lin & Yang, who review the mechanisms by which lncRNAs regulate cellular responses to extracellular signals, and discuss the clinical potential of lncRNAs as diagnostic indicators, stratification markers and therapeutic targets of combinatorial treatments.

As was mentioned in the introduction, there are numerous publications aimed at using these and other cancer-associated lncRNAs as biomarkers. Among the main advantages of lncRNAs that make them suitable as cancer diagnostic and prognostic biomarkers, high stability while circulating in body fluids, especially when included in exosomes or apoptotic bodies, is noted by Bohla et al. Despite abundant quantities of ribonucleases in different body fluids, lncRNAs protected in exosomes or apoptotic bodies can be detected in whole blood, plasma, urine, saliva and gastric juice. These lncRNAs as biomarkers are obtainable by non- or minimally invasive methods, which are well tolerated by patients compared to conventional biopsies. 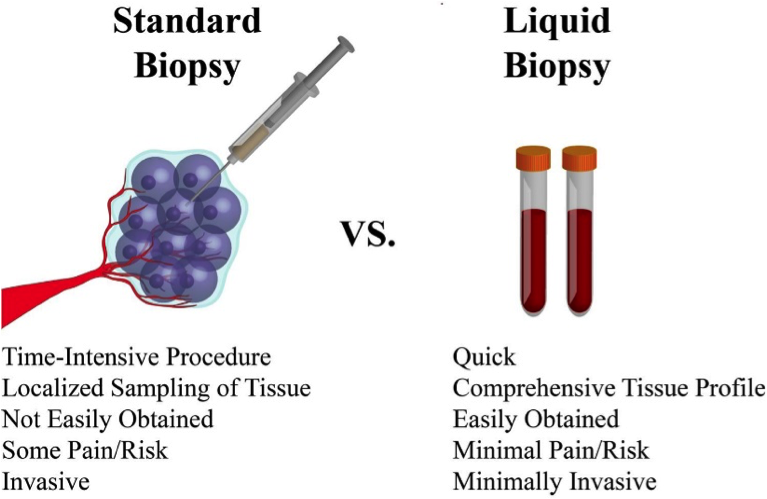 Challenges for use of lncRNAs as biomarkers include development of convenient, low cost yet robust isolation methods, and accurate quantitation of relatively low copy numbers, which heretofore has relied on an amplification step, such as enzymatic conversion into cDNA followed by PCR. However, single-molecule detection approaches have evolved to obviate the need for amplification.

For example, NanoString Technologies now offers the nCounter® lncRNA Assay for validation of lncRNA discoveries, which can then be followed by use for biomarker quantification. As depicted below in the left panel, single molecules of lncRNAs (red) can be detected at the same time as mRNAs green and blue), if so desired, using sequence-specific probes each having a fluorescence-based “barcode” identifier. The right panel depicts extension of this approach to identify lncRNA-protein interactions by inclusion of antibody precipitation. This digital-counting assay allows researchers to select up to 800 lncRNAs for analysis in a single multiplexed reaction, which is quite impressive, in my opinion. 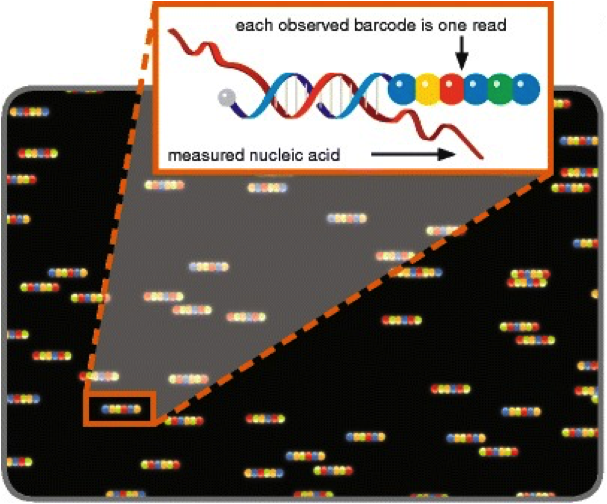 Readers interested in more details for application of nCounter® for analysis of biomarkers are referred to a recent publication by Permuth et al. dealing with pancreatic ductal adenocarcinoma (PDAC), which is an aggressive disease that lacks effective biomarkers for early detection. Briefly, these researchers hypothesized that circulating lncRNAs may act as diagnostic markers, and used nCounter® technology to measure the abundance of 28 candidate lncRNAs in pre-operative plasma from a cohort of pathologically-confirmed PDAC cases of various grades of severity and non-diseased controls. Results showed that two lncRNAs aided in differentiating PDAC from controls, and an 8-lncRNA signature had greater accuracy than standard clinical and radiologic features in distinguishing ‘aggressive/malignant’ PDAC that warrant surgical removal from ‘indolent/benign’ PDAC. In my opinion, these findings seem very promising for use with PDAC and, by conceptual extension, to other cancers. 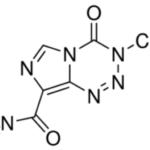 As a final example of lncRNA biomarkers for cancer, MALAT1 (pictured above) has been recently reported by Chen et al. as a prognostic factor in glioblastoma multiforme (GMF), and induces chemoresistance to temozolomide (TMZ). The significance of these findings is that GBM is the most malignant brain tumor with limited therapeutic options, and that TMZ is first-line chemotherapy for GBM. These researchers first used deep-sequencing and bioinformatic methods to identify lncRNAs showing different expression levels in TMZ-resistant and non-resistant patients. RT-qPCR was then performed in tissues and serum samples, and lncRNA MALAT1 was shown to discriminate between responding patients from non-responding patients.

If you’re are interested knowing much more about lncRNAs, then lncRNABlog.com is a great website for you to visit and subscribe to, if you want to keep current on all manner of lncRNA research and industry news. This interactive blog, which posts abstracts and images from the latest lncRNA publications, allows readers to post comments that allow you to join in the “conversation” or simply follow what others are thinking about these articles.

Also provided are links to a host of different online tools for lncRNA research and development, as well as “what’s happening” in terms of upcoming lncRNA events or conferences. Those of you currently seeking a new position may find the jobs postings to be helpful.

Finally, there are there plenty of pop-up advertisements and commercial banners, but these are also informative about lncRNA products and services that are available.