DNA-based food tests reveal there’s a good chance the meat and fish you eat contain something other than you expected and paid for. 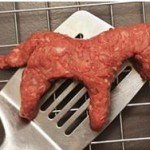 DNA-based food identification and traceability are available but seemingly not adequately deployed, as demonstrated by some new reports emerging from several countries recently.  DNA tests reveal 50,000 tons of beef in Europe, 22 tons of mutton in China, 33% of the fish in the US and 75% of game meats in South Africa involved incorrect or dishonest labeling.  Naturally, this led me to wonder if we’re really getting what we think we order in restaurants or buy at the market.  Read on for shocking details and statistics about meat and fish mislabeling around the world.

In March, the NY Times reported that ‘the discovery of horse meat in products labeled as beef in the European Union has raised serious questions, not just about food labeling, but also about food safety and the working of the somewhat opaque, global horse meat industry.’ While horse meat is edible—and indeed a culinary tradition in countries such as France and Italy—investigations to prevent mislabeling or contamination are continuing, and may reveal illegal activities in oftentimes very complex food supply chains. A recent BBC News report stated that 50,000 tons (!) of meat sold as beef by two Dutch trading companies may have contained horse meat, and that these two companies are owned by one man who has previously been investigated by food safety officials. Click here for more information on this so-called ‘2013 meat adulteration scandal.’

If horsemeat is a culinary tradition to some, you may wonder why horsemeat contamination is a food safety issue.  It’s due to the possible presence of residual amounts of veterinary or other drugs.  According the NY Times article I mentioned above, horses sent to slaughter are often not raised as a food source and thus are given prohibited substances.  For example, it’s estimated that each year 160,000 horses from US horse tracks and pastures are taken to Canada and Mexico to be slaughtered, and most of that meat is sent to Europe and Japan.  In further researching this concern, I found a list of 115 banned and dangerous substances commonly given to horses sent to slaughter that pose potential problems from ingestion of residue or metabolites.

Tilefish sold as snapper, cod sold as salmon, tilapia as yellowtail?  DNA tests show it’s happening frequently.  Unfortunately, the mislabeling isn’t limited to Europe.  Alarmingly, another NY Times article reports that similar problems apply to fish in US restaurants, markets and sushi bars. In this study, about one-third of the 1,215 fish samples spanning 28 different species of fish were mislabeled.

Which fish did you actually eat?

A common pattern was said to be economic gain at the consumer's expense, “with understudy fish—tilapia, in particular—often substituting for a menu's star, without a word to the audience.” The study also contained surprises about where consumers were most likely to be misled—sushi bars topped the list in every city studied—while grocery stores were most likely to be selling fish honestly; restaurants ranked in the middle.

Further evidence for deficiencies and/or dishonesty in food labeling comes from a recent study that used so-called “DNA barcodes” to identify source animals in commercially sold meat in South Africa, and found that the majority of game meat samples contained animals other than those described in product labeling.

As reported in the journal, Investigative Genetics, sequences from two mitochondrial genes—cytochrome c oxidase subunit I and cytochrome b—were used to barcode almost 150 commercial meat samples from South Africa, focusing on beef and wild game products. The beef samples all checked out, but results for game products were much more variable, and revealed rampant inaccuracies in food labeling—more than 75% of the game meat samples had sequences from animals not mentioned in product labels. In one instance, barcode sequences suggested that some of the substituted meat came from cape mountain zebra, an endangered species.

Since most of these types of articles that I read simply referred to use of “DNA tests,” I did some searching to learn about meat and other food identification methodology. These methods include PCR-sequencing, PCR of random amplified polymorphic DNA, PCR-restriction fragment length polymorphism (RFLP), PCR using species-specific primers, real-time PCR, DNA microarrays, short tandem repeat (STR) markers, and single nucleotide polymorphisms (SNPs). If you’re interested in a comprehensive and up-to-date free via Google Books—check out “DNA-based Methods for Authentication of Meat and Meat Products” by Fajado et al.   If you’re not familiar with SNP detection by single-base primer extension, a short description is available at TriLink’s web page for mtDNA SNP Assay Primers.

As depicted below, STR markers are polymorphic DNA loci containing repeated nucleotide sequences, typically from 2 to 6 nucleotides per unit. The length of the repeated unit is the same for the majority of the repeats within a locus; the number of repeats for a specific locus may differ, resulting in alleles of varying length that, in effect, identify a particular individual in a given species. STR analysis includes multiplexed PCR amplification of a number of STR loci using fluorescently (blue, green, etc.) labeled primers; labeled PCR products are then analyzed by electrophoresis to separate the alleles by size that is measured relative to size-standards (red). 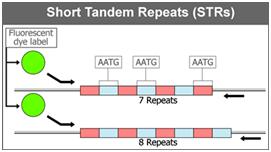 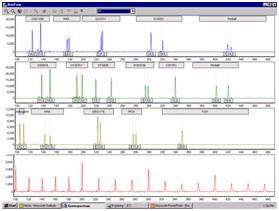 Quantitation is another aspect of food identification for which DNA analysis is used. In some instances this involves checking whether, say, a product labeled “all beef” is actually 100% beef, free of detectable levels of, say, horsemeat. Alternatively, whether a sausage product labeled as a certain mixture of meats is in fact that. Given the widespread applicability of real-time PCR for simultaneous identification and quantitation, it’s not surprising to find qPCR used for food analysis. For one example of this, see Koppel et al. 2012 wherein tetraplex real-time PCR was used for quantitation of beef, pork, sheep (mutton), and horsemeat proportions in sausage. Even more impressive multiplexing can be found in Koppel et al. 2009 wherein the fractional proportion of each of seven common types of meats—pork, beef, chicken, turkey, horse meat, sheep (mutton) and goat—was simultaneously measured between 2 and 100% by heptaplex real-time PCR.

While all of the above DNA analysis methods are scientifically interesting, I came across the following backstory for

IdentiGen supplies the proprietary DNA TraceBack® testing system to meat processing plants that supply these restaurants in order to verify the beef composition and origin.

For those interested in learning more about farm-to-store/restaurant supply-chains and the non-trivial science/statistics underlying DNA TraceBack®, I highly recommend reading a freely accessible Google Book Chapter entitled Tracing Meat Products through the Production and Distribution Chain Farm to Consumer

written by Ronan T. Loftus and Ciaran Meghen, who were involved with founding IdentiGen. They are also among the inventors of IdentiGen’s patent broadly covering “a method for identifying the animal from which a meat product is derived comprising genotyping the meat, comparing the genotype with known animal genotypes and locating any matching genotype to identify the animal from which the meat product is derived.”

Rats Passed Off as Mutton in China

If only the reports stopped at horsemeat contamination, misleading fish identities and mislabeled game meat.  Just a few days ago, a million dollar crime ring was busted in China for passing off some very unsavory creatures as lamb.   Police have arrested more than 904 suspects and confiscated over 22 tons of ‘fake or inferior meat since January of this year, including ‘one suspect who had used additives to spice up and sell rat, fox and mink meat’.  We can only hope that we’ll soon seen wider spread testing to verify that the foods we pay for and put in our bodies are really what we expect them to be.

Even your EVOO could be mislabeled!

Over the past few years we’ve seen resurgence in the popularity of olive oil with home cooks as well as high profile chefs.  While the price might cause hesitation, many of us go ahead and spend the money expecting high quality oil.  Recent studies published by the USDA, however, show that what is labeled as olive oil may actually contain less expensive canola, safflower and/or sunflower oil.  Researchers Talwinder Kahlon and coinvestigators at the Agricultural Research Service’s (ASR) Western Regional Research Center in Albany, California have developed a PCR assay to determine the true composition of oils labeled as olive.  The assay compares DNA of olive, canola, and sunflower plants from key regions of two genes—matK and psbA-trnH.  These two genes commonly occur in sources of vegetable oil, including in olive, canola, sunflower, safflower plants.

The assay has proven to be a ‘reliable basis of comparison and can be used to quickly detect the presence of the non-olive oils in an “olive oil” sample. The assay can identify the three oils at concentrations of 5 percent or higher.’

So, What Can and Should Be Done to Ensure Honest Food Labels?

In concluding this post, I’d like to point out that various commercial products are available for DNA-based food testing. For example, DuPont Food Diagnostics offers the BAX® System for real-time PCR detection of pathogens or other organisms in food samples. Its RiboPrinter® system analyzes regions encoding not only the 16S rRNA sequence, but also the 5S and 23S sequences, plus the spacer regions and flanking genes on either side. This rich depth of information allows for highly precise differentiation among strains of the same species, even those with the same 16S sequence.   The same principles apply to any food.  As of today, routine food testing is limited and not part of the normal production process for most manufacturers.  Public pressures will hopefully lead to more companies adopting routine food testing as a normal standard of quality .