You and Your Microbiome – Part 3

It’s been almost two-and-a-half years since posting Part 2 in this series on microbiomes, which I first began in 2013, and the publication rate keeps accelerating, with about 7,000 articles indexed in PubMed in 2016—way more than the mere 35 in 1996. This vast amount of new microbiome information being published annually led me to use the following search strategy to guide my selection of what’s trending in importance for microbiomes. 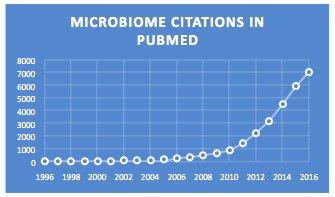 Basically, I used Google Scholar to search for publications since 2015 that had the term “microbiome” in the title and, among those items found, used the number of citations as a quantitative indicator of interest, importance, and/or impact. But before summarizing my findings for these Top 10 Most Cited Microbiome articles, here’s what you can read in my previous two postings on microbiomes in case you missed them or want to refresh your memory: 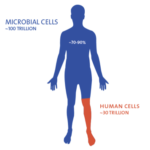 Proportion of cells in the human body. You are comprised of much more than what you think you are! Taken from amnh.org

Meet Your Microbiome: The Other Part of You

You and Your Microbiome – Part 2

The following articles, which were all published in 2015, are listed in decreasing order of the number of citations in Google Scholar. Titles are linked to original documents for interested readers to consult, and synopses represent my attempt to capture essential findings. 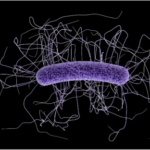 Many antibiotics destroy intestinal microbial communities and increase susceptibility to intestinal pathogens such as Clostridium difficile, which is a major cause of antibiotic-induced diarrhea in hospitalized patients. It was found that Clostridium scindens, a bile acid 7-dehydroxylating intestinal bacterium, is associated with resistance to C. difficile infection and, upon administration as a probiotic, enhances resistance to C. difficile infection.

2. Dynamics and stabilization of the human gut microbiome during the first year of life (298 citations)

Applying metagenomic sequencing analysis on fecal samples from a large cohort of Swedish infants and their mothers, the gut microbiome during the first year of life was characterized to assess the impact of mode of delivery and feeding. In contrast to vaginally delivered infants, the gut microbiota of infants delivered by C-section showed significantly less resemblance to their mothers. Nutrition had a major impact on early microbiota composition and function, with cessation of breast-feeding, rather than introduction of solid food, being required for maturation into an adult-like microbiota. 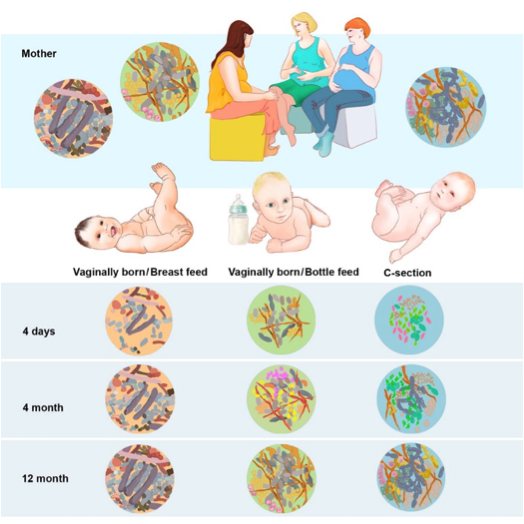 3. Structure and function of the global ocean microbiome (238 citations)

Metagenomic sequencing data from 243 ocean samples from 68 locations across the globe was used to generate an ocean microbial reference gene catalog with >40 million novel sequences from viruses, prokaryotes, and picoeukaryotes. This ocean microbial core community has 73% of its abundance shared with the human gut microbiome despite the physicochemical differences between these two ecosystems.

The brain-gut axis is a bidirectional communication system between the central nervous system and the gastrointestinal tract. Serotonin functions as a key neurotransmitter at both terminals of this network. Accumulating evidence points to a critical role for the gut microbiome in regulating normal functioning of this axis. The developing serotonergic system may be vulnerable to differential microbial colonization patterns prior to the emergence of a stable adult-like gut microbiota. At the other extreme of life, the decreased diversity and stability of the gut microbiota may dictate serotonin-related health problems in the elderly. Therapeutic targeting of the gut microbiota might be a viable treatment strategy for serotonin-related brain-gut axis disorders.

5. The dynamics of the human infant gut microbiome in development and in progression toward type 1 diabetes (184 citations) 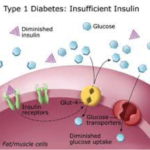 Colonization of the fetal and infant gut microbiome results in dynamic changes in diversity, which can impact disease susceptibility. To examine the relationship between human gut microbiome dynamics throughout infancy and type 1 diabetes (T1D), a cohort of 33 infants genetically predisposed to type 1 diabetes (T1D) was examined to model trajectories of microbial abundances through infancy. A marked drop in diversity was observed in T1D progressors in the time window between seroconversion and T1D diagnosis, accompanied by spikes in inflammation-favoring organisms, gene functions, and serum and stool metabolites. These trends in the human infant gut microbiome thus distinguish T1D progressors from nonprogressors.

6. The microbiome of uncontacted Amerindians (150 citations) 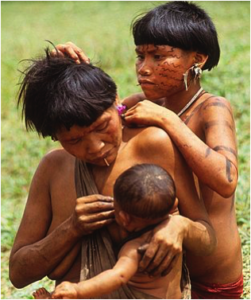 Sequencing of fecal, oral, and skin bacterial samples was used to characterize microbiomes and antibiotic resistance genes (resistome) of members of an isolated Yanomami Amerindian village in the Amazon with no documented previous contact with Western people. These Yanomami harbor a microbiome with the highest diversity of bacteria and genetic functions ever reported in a human group. Despite their isolation, presumably for >11,000 years since their ancestors arrived in South America, and no known exposure to antibiotics, they harbor bacteria that carry functional antibiotic resistance (AR) genes, including those that confer resistance to synthetic antibiotics. These results suggest that westernization significantly affects human microbiome diversity and that functional AR genes appear to be a feature of the human microbiome even in the absence of exposure to commercial antibiotics.

7. Akkermansia muciniphila and improved metabolic health during a dietary intervention in obesity: relationship with gut microbiome richness and ecology (136 citations) 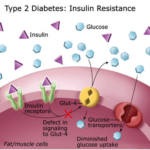 Individuals with obesity and type 2 diabetes differ from lean and healthy individuals in their abundance of certain gut microbial species and microbial gene richness. This study in humans found that, at baseline, A. muciniphila was inversely related to fasting glucose, waist-to-hip ratio and subcutaneous adipocyte diameter. Subjects with higher gene richness and A. muciniphila abundance exhibited the healthiest metabolic status. Individuals with higher baseline A. muciniphila displayed greater improvement in insulin sensitivity markers and other clinical parameters. A. muciniphila is therefore associated with a healthier metabolic status and better clinical outcomes for overweight/obese adults.

8. Host biology in light of the microbiome: ten principles of holobionts and hologenomes (132 citations)

Today, animals and plants are no longer viewed as autonomous entities, but rather as "holobionts", composed of the host plus all of its symbiotic microbes. The term "holobiont" refers to symbiotic associations throughout a significant portion of an organism's lifetime, with the prefix holo- derived from the Greek word holos, meaning whole or entire. Holobiont is now generally used to mean every macrobe and its numerous microbial associates, and the term importantly fills the gap in what to call such assemblages. Symbiotic microbes are fundamental to nearly every aspect of host form, function, and fitness, including traits that once seemed intangible to microbiology: behavior, sociality, and the origin of species. Microbiology thus has a central role of in the life sciences, as opposed to a “bit part.”

The nasopharynx (NP) is a reservoir for microbes associated with acute

to asthma development. The NP microbiome examination during the first year of life in a cohort of 234 children led to characterization of viral and bacterial communities, and documenting all incidents of ARIs. Most infants were initially colonized with Staphylococcus or Corynebacterium before stable colonization with Alloiococcus or Moraxella. Transient incursions of Streptococcus, Moraxella, or Haemophilus marked virus-associated ARIs. Early asymptomatic colonization with Streptococcus was a strong asthma predictor, and antibiotic usage disrupted asymptomatic colonization patterns.

10. Insights into the role of the microbiome in obesity and type 2 diabetes (128 citations)

Obesity and type 2 diabetes (T2D) are associated with changes in the composition of the intestinal microbiota, and the obese microbiome seems to be more efficient in harvesting energy from the diet. Lean male donor fecal microbiota transplantation (FMT) in males with metabolic syndrome resulted in a significant improvement in insulin sensitivity and increased intestinal microbial diversity, including a distinct increase in butyrate-producing bacterial strains. Such differences in gut microbiota composition might function as early diagnostic markers for the development of T2D. The rapid development of FMTs provides hope for novel therapies in the future.

It always amazes me to learn about the many ways TriLink products are used in basic and applied science. When I searched Google Scholar for publications containing “TriLink [and>

I found 21 items, among which the following were selected to illustrate diversity of these product types and uses:

In summary, several takeaways should now be apparent to you. The first takeaway is that there is continuing explosive growth of microbiome publications in all manner of life-related research, as evidenced by both the introductory PubMed graph and wide spectrum of subjects covered by the Top 10 Cited Publications mentioned above.

The second takeaway is best summarized in publication #8 above, “[t>

oday, animals and plants are no longer viewed as autonomous entities, but rather as ‘

holobionts’, composed of the host plus all of its symbiotic microbes.” Each of us is indeed inextricably comprised of our human cells and symbiotic microbiota in or on us—like it or not, and for better or worse.

The final takeaway is that TriLink products play a contributing role in elucidating and applying this new world-view of halobionts.