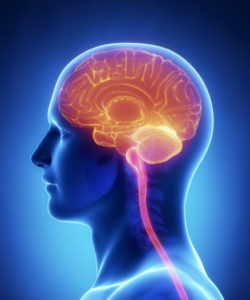 According to the most recent fact sheet available from the Central Brain Tumor Registry of the United States, an estimated 86,970 cases of primary malignant and non-malignant brain and other central nervous system (CNS) tumors are expected to be diagnosed in the US in 2019. Of these cancers, the most common are ‘diffuse gliomas,’ which vary in aggressiveness from oligodendrogliomas that can be associated with prolonged survival, to glioblastoma multiforme (GBM), which has a median survival of less than two years. GBM is the most common primary malignant brain tumor, comprising 16% of all primary brain neoplasms, states M. E. Davis in a comprehensive review of GBM. Davis notes that although GBM occurs almost exclusively in the brain, it can also appear in the brain stem, cerebellum, and spinal cord.

Additionally, while GBM was originally thought to be derived solely from glial cells, evidence now suggests that GBM may arise from multiple cell types with neural stem cell–like properties. Stem cells are characterized by their capacity to differentiate into multiple cell types. Neural stem cells primarily differentiate into glial cells including neurons, astrocytes, and oligodendrocytes.

According to Davis, genomic profiling of human tumor samples has revealed a complicated genetic profile for GBM, and established a set of three core signaling pathways that are commonly activated: the tumor protein p53 pathway (depicted here), the receptor tyrosine kinase/Ras/phosphoinositide 3-kinase signaling pathway, and the retinoblastoma pathway. The majority of primary and secondary GBMs have alterations in these pathways, giving rise to uncontrolled cell proliferation and enhanced cell survival, while also allowing the tumor cell to escape from cell-cycle checkpoints, senescence, and apoptosis pathways. 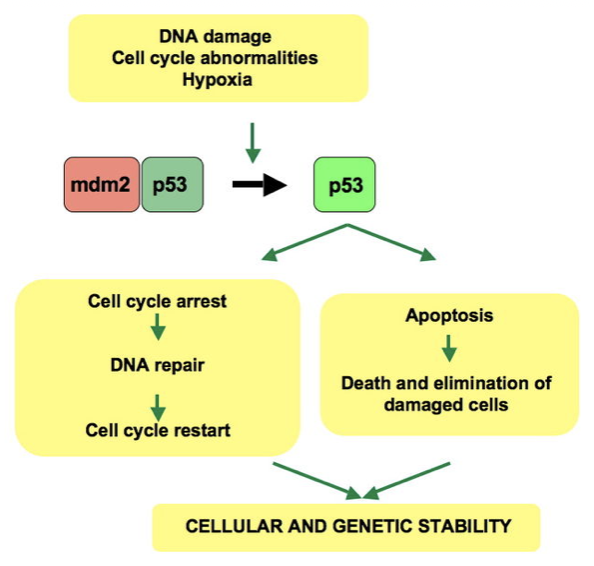 The Rationale for CNS Biomarkers for Brain Cancer

The prognosis and therapy for brain cancer depends on an accurate and early diagnosis of the specific type of brain tumor. This can crucially influence quality of life, as well as survival of patients. Current diagnostic approaches are based on imaging methods such as computed tomography and magnetic resonance imaging (MRI), pictured here, with subsequent histological examination of biopsy. However, these approaches are limited by brain tumor localization and heterogeneity.

For these reasons, there is a need for new minimally invasive diagnostic approaches and biomarkers that are robust, sensitive, and specific. The use of biomarkers found in body fluids (aka liquid biopsies) is proving to be successful for a variety of pathological conditions, including cancer. Cerebrospinal fluid (CSF), which bathes all the CNS and is in direct contact with any possible pathological components, is considered to be the ideal source of these biomarkers for brain tumor detection.

MiRNAs  are single-stranded, non-coding RNAs ~18–25 nucleotides in length that post transcriptionally regulate gene expression, as reviewed elsewhere. Circulating miRNAs have been found in almost all human body fluids, including CSF. Importantly, several studies have shown that deregulated levels of CSF miRNAs are associated with malignant tumors of the CNS. Taken together, analysis of miRNAs in the CSF of brain tumor patients might help develop a new diagnostic platform, thus enabling more precise diagnostic approaches.

The stated aim of a study reported in October 2019 by Kopkova et al. “was to identify specific CSF miRNA patterns that could differentiate among brain tumors” in order to “potentially aid borderline or uncertain imaging results [for>

avoiding most invasive procedures such as stereotactic biopsy or [surgical>

biopsy.” In total, 175 patients with brain tumors (glioblastomas, low-grade gliomas, meningiomas, and brain metastases), and a control group of 40 non-tumor patients with noncancerous hydrocephalus were included in this prospective clinical study conducted in the Czech Republic.

In brief, 4–6 mL CSF samples were obtained from lumbar punctures between the L3 and L5 vertebrae before surgical intervention in brain tumor patients, or during standard therapy management of patients with normal-pressure hydrocephalus (non-tumor control patients). 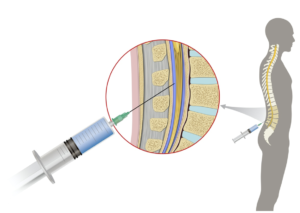 Kopkova et al. initially used Illumina small RNA sequencing to perform high-throughput miRNA profiling on samples from a discovery cohort of 70 patients and 19 controls. Specific miRNA signatures of all tested brain tumor types were identified. Then, qRT-PCR was utilized for the validation of 9 candidate miRNAs, which was executed on an independent cohort of 105 brain tumor patients and 21 controls. Based on the successful results of this validation procedure, various combination patterns of the levels of 5 miRNAs (miR-30e, miR-140, let-7b, mR-10a and miR-21-3p) were used to provide CSF-diagnostic scores for each tumor type. 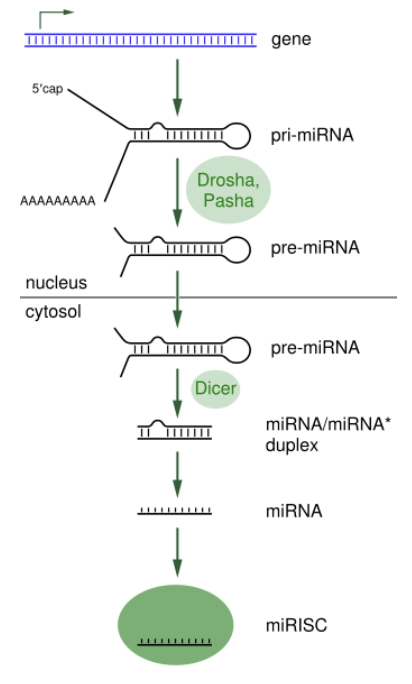 MiRNA processing. Taken from commons.wikimedia.org and free to use.

This approach enabled Kopkova et al. to distinguish between the brain tumor samples from the tumor types tested and the control samples. These investigators concluded that they “performed the largest study so far focused on CSF miRNA profiling in patients with brain tumors, and believe that this new class of biomarkers have a strong potential as a diagnostic and prognostic tool in these patients.”

An important consideration regarding all methods for next-generation sequencing of miRNAs is the use of a sample preparation procedure that efficiently captures and amplifies these small RNAs, which are present in relatively low abundance compared to other types of RNA. In addition, the resultant RNA libraries should not be obscured by large amounts of sequencing adapter dimers, which form when the 5’ and 3’ adapters for sequencing self-ligate without the RNA library insert. Consequently, amplification of this relatively small-sized adapter dimer side product often exceeds amplification of the tagged library. To resolve this problematic technical issue, Kopkova et al. employed the CleanTag® Small RNA Library Preparation Kit from TriLink Biotechnologies and its accompanying protocol. 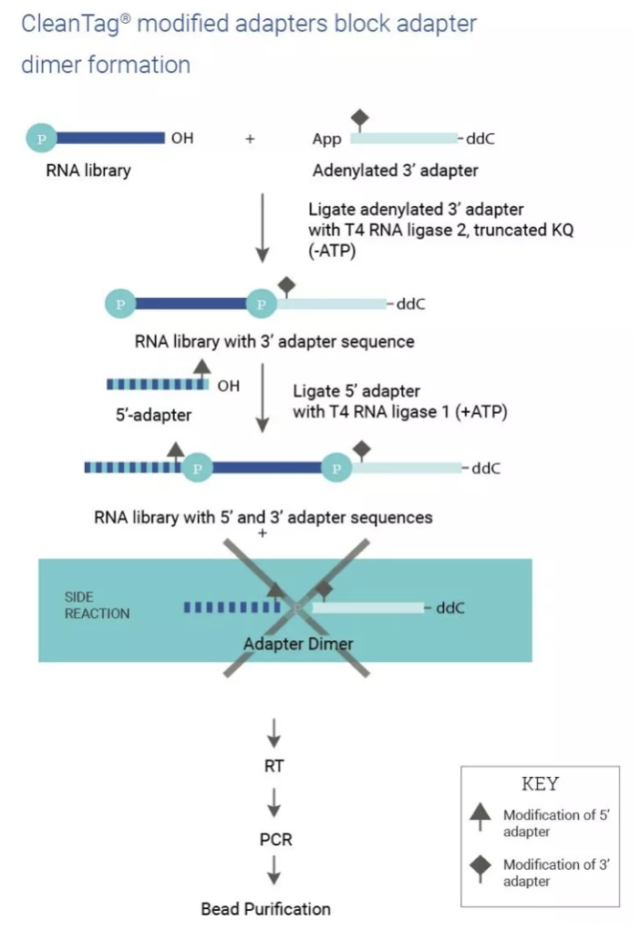 For details on the development and improved performance of CleanTag® technology, follow this link to a publication by Shore et al. in PLOS ONE, which has had more than 11,000 views since its online publication in November 2016. As depicted here, CleanTag® blocks adapter-adapter ligation without suppressing ligation of the RNA library by using chemically modified 5’ and 3’ adapters. The RNA library is then reverse-transcribed into cDNA for PCR amplification, which is followed by bead purification for sequencing.

Rather than offer paraphrased conclusions about the aforementioned findings published by Kopkova et al., here is a direct quote of the summary remarks by these investigators:

“In conclusion, we performed the largest study so far focused on CSF miRNA profiling in patients with brain tumors. We described significant differences in CSF miRNA levels in patients with all tested tumor types by the use of small RNA sequencing, which is the most comprehensive method of miRNA profiling. The majority of the miRNA candidates we have also successfully validated in independent cohorts of patients by [a>

standard qRT-PCR method. Based on our results, we believe that CSF miRNAs have strong potential as the diagnostic and prognostic biomarkers in patients with brain tumors.”

Although I’m not an expert in this area, the reported findings seem quite impressive, and support these conclusions about the potential utility of the CSF miRNA biomarkers for brain cancer. As one of the coauthors of the publication by Shore et al. on CleanTag® technology, which was used by Kopkova et al. for this CNS miRNA biomarker investigation, this is a personally gratifying application of CleanTag®.

A meningioma is a tumor that arises from the meninges (illustrated here)—the membranes that surround your brain and spinal cord. Although not technically a brain tumor, it is included in this category because it may compress or squeeze the adjacent brain, nerves, and vessels. Meningiomas are typically benign and curable by surgery. In about 20% of cases, however, the tumors recur, and then patient prognosis is poor. Tumor histopathology is currently used to predict which patients might benefit from more aggressive treatment, but this method can be inaccurate.

Cross-section of the meninges.

After writing this blog, Patel et al. reported the use of clinical gene expression, as well as the use of DNA and RNA sequencing data to classify the meningiomas of 140 patients. Their analysis identified three distinct groups of tumors (A, B, and C), with type C being the most likely to recur. Type C tumors were characterized by altered activity of a protein complex that controls cell cycle progression. Importantly, this molecular classification system was a better predictor of prognosis than the method currently used in clinics. 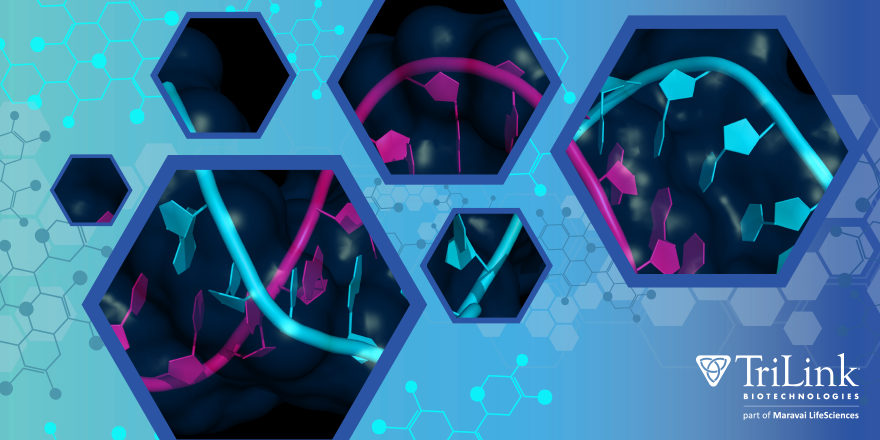