In terms of achieving protein production for therapeutic purposes, usurping cellular machinery after administration of exogenous mRNA dates back to early publications by Wolff et al. (1990) and Jirikowski et al. (1992). However, major advances in mRNA-encoded protein therapeutics called for the evolution of various approaches to protect or mask mRNA by means of liposomal encapsulation and/or chemical modifications, as recently reviewed elsewhere. Broadly speaking, the proteins delivered as cognate mRNAs can replace missing or mutant proteins, serve as antigens for an immune response (e.g. mRNA vaccines), or act as various types of functional antibodies. 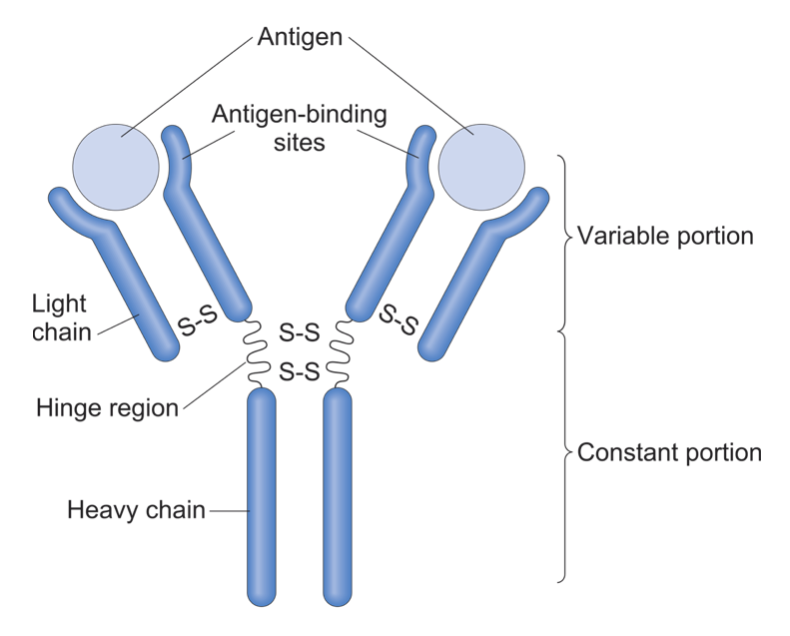 An alternative to administration of an antibody that is first produced ex vivo, the use of a biosynthetic (i.e. in vitro transcribed, IVT) mRNA to generate an antibody in vivo as has been comprehensively reviewed in a 2019 publication by Schlake et al. rhetorically titled mRNA: A Novel Avenue to Antibody Therapy? In addition to the utility of exogenous antibody drugs, especially for cancer, there are multiple reasons for addressing this question. 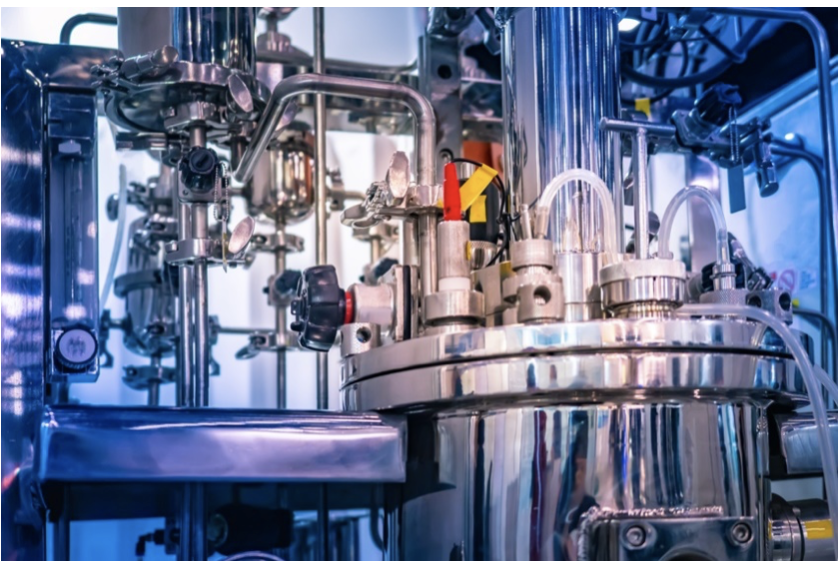 The process of large-scale antibody production has many challenges: purification protocols are complex and often have to be tailored for each individual antibody; high frequency of aberrant post-translational modifications necessitates extensive and costly quality control; mammalian antibody-producing cell lines are prone to mutations and expensive to maintain. Furthermore, antibodies themselves are susceptible to rapid clearance and degradation by serum enzymes.

In some cases, this rapid elimination requires frequent drug dosing, which additionally increases treatment cost and can lead to unwanted side effects, including immune system activation.

As an alternative approach, IVT-mRNA has demonstrated its potential to generate high levels of circulating protein in vivo compared to DNA plasmids and viral vectors. The IVT-mRNA production protocol is uniform for several antibodies and does not require mammalian cell culture. Using IVT-mRNA, antibody production is transferred inside the body, allowing for better control over post-translational modifications. Moreover, the process of antibody structure optimization can be simplified by using IVT-mRNA to express protein therapeutics, rather than delivering protein directly. In addition, IVT-mRNA delivery (reviewed in 2019 by Kowalski et al.) allows therapeutic antibody expression within the host cell and can therefore aid in directing therapeutics toward intracellular targets.

Although RNA is susceptible to degradation by nucleases, the introduction of base modifications such as 5-methoxyuridine or N1-methyl-pseudouridine has recently been reported to improve IVT-mRNA stability, while also reducing the associated immunogenicity. Finally, because IVT-mRNA does not need to enter the cell nucleus to be functional, the risk of insertional mutagenesis is minimized and transfection efficacy is improved in non-dividing cells.

The remainder of this blog will focus on a recent report by Rybakova et al. that, for the first time, demonstrates the delivery of an IVT-mRNA in vivo to express a fully functional anticancer antibody designed to mimic the monoclonal antibody trastuzumab, sold under the brand name Herceptin. In this instance, unmodified IVT-mRNAs of heavy and light chains were co-delivered in a protective lipid nanoparticle (LNP).

Rybakova et al. described the development of an LNP-based IVT-mRNA system for in vivo delivery of the anti-human epidermal growth factor receptor 2 (HER2, also known as ERBB2) antibody trastuzumab, and demonstrated functionality of the produced protein. Trastuzumab targets HER2, which is overexpressed in ~30% of breast cancer patients. According to Rybakova et al., the binding of trastuzumab to HER2, shown here, prevents both receptor cleavage and dimerization, and thus results in abrogation of downstream proliferative and pro-survival pathways. In addition, they say, trastuzumab-induced, antibody-dependent, cell-mediated cytotoxicity has been shown to be very important to the antitumor effect of trastuzumab. 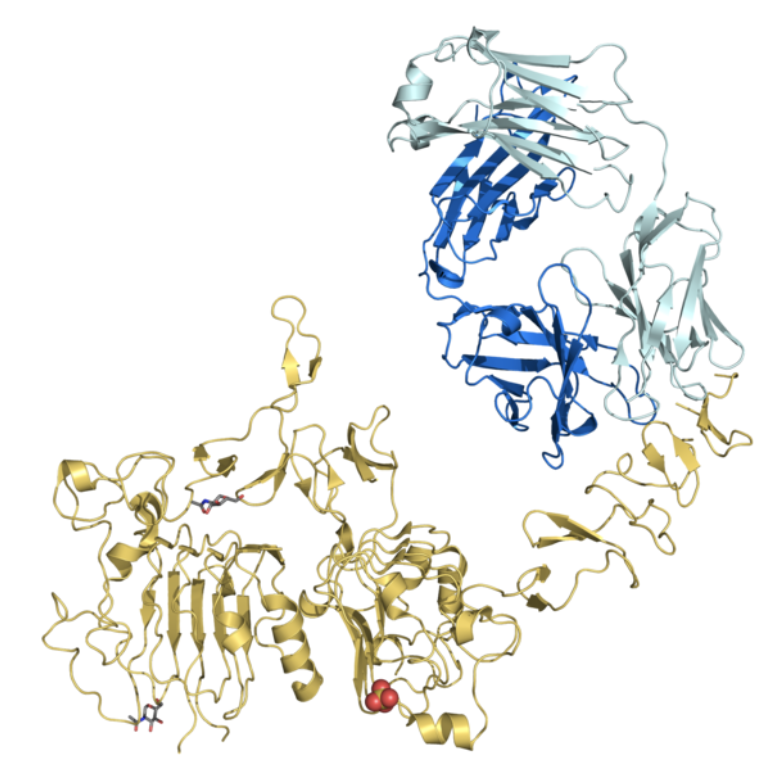 Design and Optimization of Trastuzumab mRNA for LNP Delivery

As depicted below, mRNA is comprised of a cap structure, 5’ and 3’ untranslated regions (UTRs), a protein-coding sequence, and a poly-A tail. It is known that 2’-O-methylation of naturally occurring Cap 0, termed Cap 1, significantly enhances mRNA translation. Cap 1 was therefore used for all of the IVT-mRNA synthesized by Rybakova et al. In addition, the researchers used a 5’ UTR comprised of a partial sequence of the cytomegalovirus (CMV) immediate early 1 (IE1) gene and a 3’ UTR comprised of a partial sequence of the human growth hormone (hGH) gene, as these two regions have been shown to induce efficient protein expression in different tissues in vivo. The 3’ poly-A tail was estimated to be ~120 nt long. This basic construct was optimized by varying the upstream signal peptide sequence, as well as the relative ratio of encoded heavy and light chains (see above), as detailed in Rybakova et al. 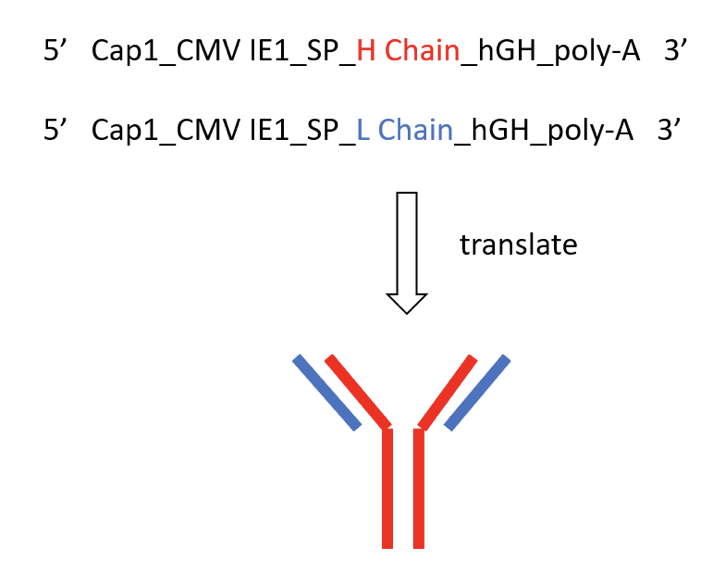 In Vivo Validation of Trastuzumab Production 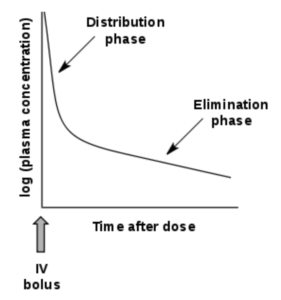 Exemplary plot of plasma concentration (in log-scale) of a drug after an IV administration. Taken from commons.wikimedia.org and free to use.

To compare the pharmacokinetic profile of this endogenously expressed trastuzumab with the current standard of treatment, mice were administered a single injection of 8 mg/kg of trastuzumab protein (Herceptin) – the highest dose used in patients – and trastuzumab serum levels were monitored for 1 month. After 30 min, 120 ± 12 mg/mL of Herceptin antibody was detected, which dramatically decreased within the next few hours and reached 64 ± 4 mg/mL at 6 h after administration. One day after injection, the trastuzumab serum concentration was 59 ± 4 mg/mL, and it continued to decrease slowly over the next few weeks. Analysis of these trastuzumab pharmacokinetics revealed a comparable half-life for both mRNA-LNPs and Herceptin treatment. Importantly, the mRNA-based delivery resulted in a 64% higher antibody serum concentration over the course of 30 days, as reflected by the area under the curve. Rybakova et al. concluded that, overall, “a single dose of LNPs with IVT-mRNA encoding trastuzumab at 2 mg/kg showed favorable serum pharmacokinetics of the antibody over the course of 1 month, as compared to a single injection of Herceptin at 8 mg/kg.”

Functional In Vivo Validation of the Optimized Trastuzumab mRNA Construct

To study whether trastuzumab produced using the optimized mRNA exhibited anticancer activity in vivo, Rybakova et al. assessed its effects on tumor growth and animal survival in a mouse model using HER2-positive and HER2-negative human breast cancer xenografts. In the former, HER2 expression was confirmed by qPCR, while the HER2-negative cell line was used to control for non-specific side effects associated with RNA, such as production of inflammatory cytokines (TNFa, IL-12, IL-8, and type I interferons) after RNA recognition by innate immune receptors (TLR3, TLR7, TLR8, RIG-I, MDA5, and others) and triggering of the antitumor immune response via mechanisms independent of the RNA sequence. 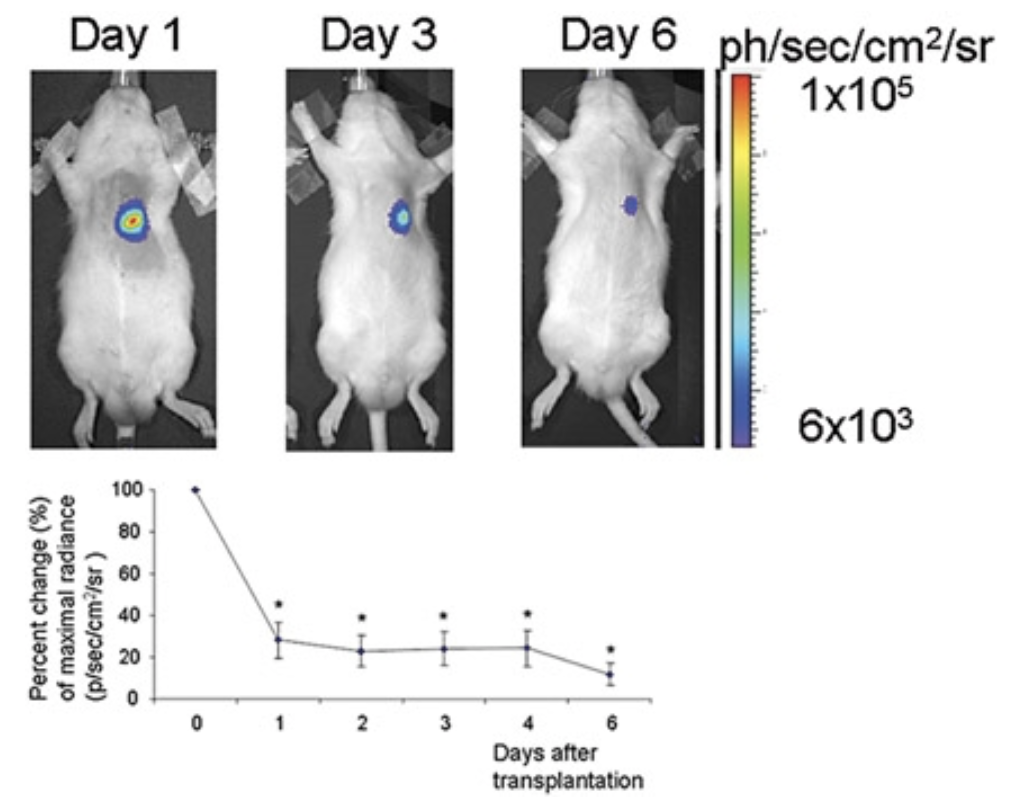 An example of monitoring cell survival using a reporter gene. Taken from commons.wikimedia.org and free to use. 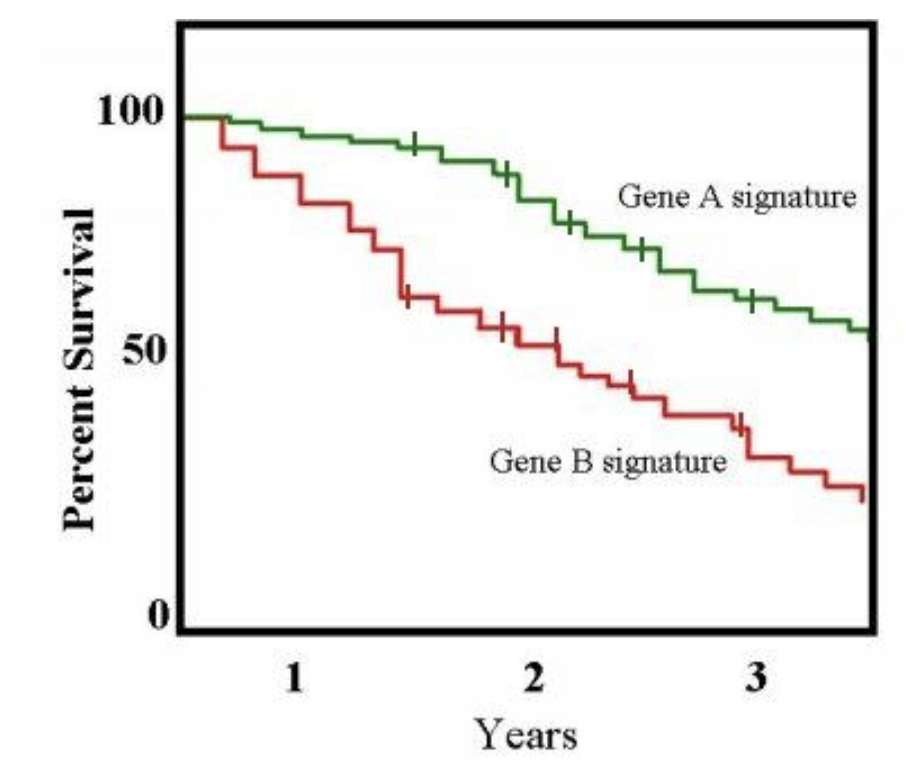 Toxicity was evaluated in various ways for mice treated with LNP-delivered IVT-mRNA, and none was found.

Finally, according Rybakova et al., this study is the first demonstration of the inhibition of solid tumor growth by a full-size antibody produced in the liver upon delivery of IVT-mRNA formulated into LNPs. They add that this study “provides a guideline for the optimization of an IVT-mRNA construct, which can be used for the development of other monoclonal antibody mRNA therapies.”

The Zone is very impressed with these findings, and agrees with the belief that they provide potentially valuable guides for future investigations. 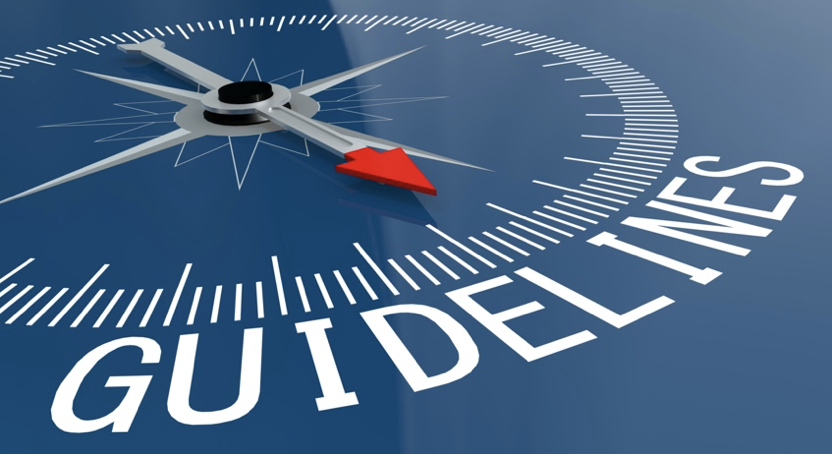 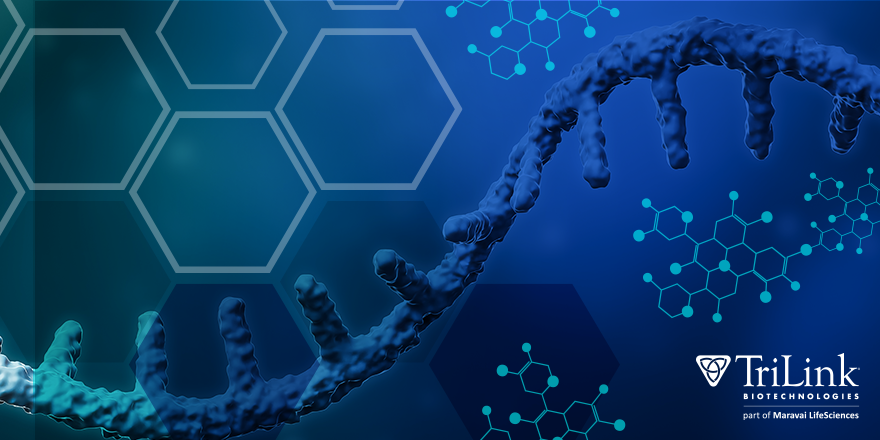