Every once in a while the title of a publication grabs my attention so much that I just have to read it, and that’s what happened when I read this one A Near-Infrared Laser-Activated “Nanobomb” for Breaking the Barriers to MicroRNA Delivery. 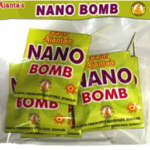 My interest was primarily piqued by the word ‘nanobomb,’ which I had never heard of even though I consider myself quite well-read scientifically. Moreover, microRNA (miRNA) and drug delivery are both currently trending hot topics. I couldn’t find an eye catchy image of a nanobomb other than fireworks by this name sold in India, which are oddly touted as being “pollution free”! But I digress…

Delivery of miRNA and other types of nucleic acid-based drugs continues to be perhaps the biggest challenge facing successful clinical development of this broad new class of drugs. In that regard, an expert review titled Nucleic acid delivery: the missing pieces of the puzzle?, written by my good friend and long-time collaborator Prof. Frank Szoka (UCSF), is a “must read” for those of you who are interested in further details and perspectives by an expert. 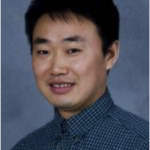 Prof. Xiaoming He. Taken from bme.osu.edu

Another “hook” in the nanobomb article’s title was its use of lasers, which are also trending in biomedical or biotechnological applications. So, all of this taken together, led me to request a pdf from the corresponding coauthor, Prof. Xiaoming He at Ohio State University, who promptly complied. Since it’s a pay-to-read publication, I’ve tried my best to convey the essence of this work in what follows.

Like a symphony, which is an elaborate musical composition for full orchestra, I learned that Prof. His nanobombs for laser-induced drug delivery are also quite elaborate and composed of a full array of scientific principles. To my surprise, a Google Scholar search of the term “nanobomb” gave a large number—more than one hundred—of items that included a wide variety of ways to use nano-size, i.e. sub-micron materials and light to somehow “blow up” or otherwise kill diseased cells, and thus fall under the umbrella-term photodynamic therapy. 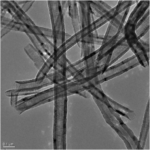 For example, there’s a report in 2005 coauthored by Eric Wickstrom—who coincidentally is a friend of mine from early antisense oligo days—on the first application of single-wall carbon nanotubes (SWCNT) as potent therapeutic nanobombs for killing breast cancer cells in vitro. This is accomplished by adding water molecules into SWCNTs, which then get adsorbed on target cells for 800-nm (red) laser light irradiation to vaporize the entrained water.

A more elaborate rendition of nanobomb drug delivery was published in 2013 by Lu et al., who reported that intracellular gold nanoparticles under laser irradiation generate “nanobubbles” that can kill cells. To formulate a targeting gold nanoparticle as a cancer cell-specific "nanobomb," a 31-nt DNA aptamer was conjugated to the gold surface. While biological results from this approach have yet to be published, there’s a good tutorial on the properties and applications of gold nanoparticles that are commercially available in discrete sizes, as seen here:

This section heading extending my musical metaphor for nanobomb drug delivery is meant to convey the fact that the study by Prof. He and his coworkers featured herein is a symphony-like variation of photodynamic therapy composed of many parts. This work stands out—in my opinion—as being a remarkably comprehensive proof-of-concept involving lots of in vitro data and, more importantly, compelling in vivo animal results. I think you’ll “tune in”—musical pun intended—on this as I now summarize the complex scientific symphony by He and coworkers pictured below. 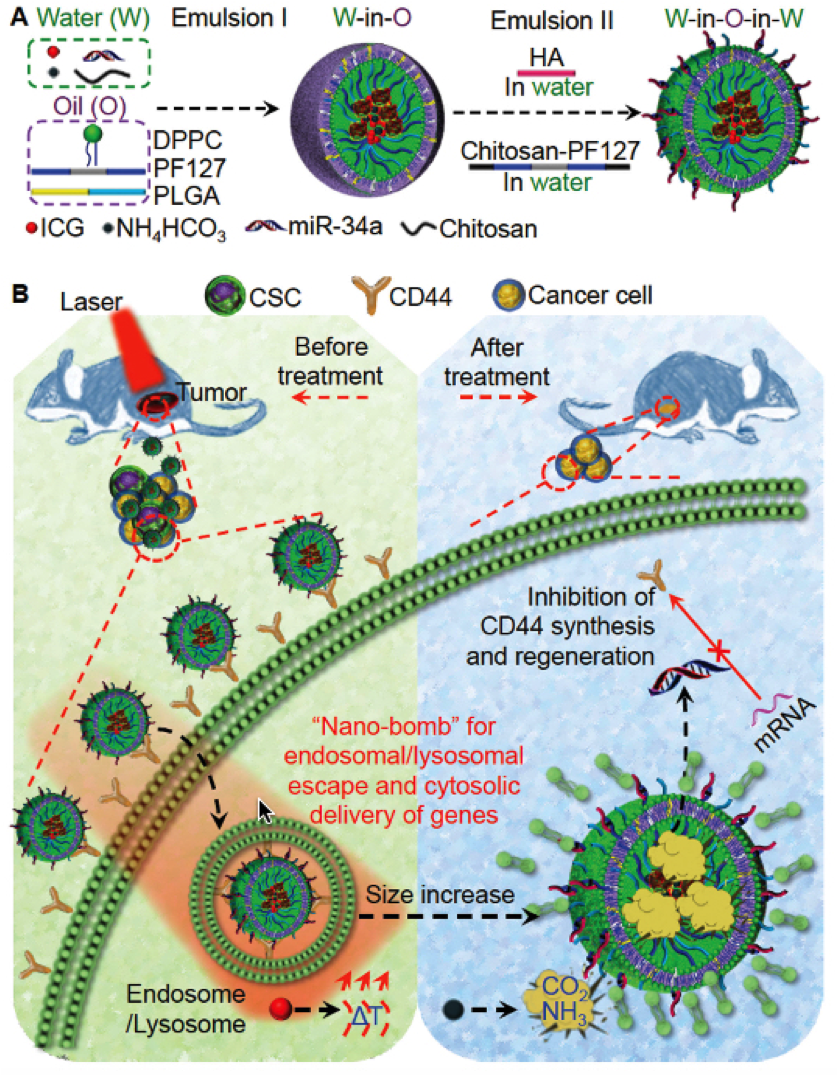 The top part of the above depiction labeled (A) doesn’t do justice to the elegant methodology used to prepare the water-in-oil-in-water (W-in-O-in-W) double-emulsion nanobomb, so interested readers will have to consult the publication by He and coworkers for details. However, as shown in A, the nanobomb’s active components are indocyanine green (ICG), ammonium bicarbonate (NH4HCO3) and microRNA-34a (miR-34a), the latter of which I found is a single-stranded 22-nt RNA rather than the misleading drawn double-stranded species. Chitosan’s amino groups form a polyplex with miRs like miR-34a.

I also found many references to miR-34a as an anticancer agent, and in this instance it serves to negatively regulate CD44 overexpression, which is associated with survival and growth of prostate cancer stems cells (CSCs) as previously studied by a number of other groups.

Having said this, the real novelties of this nanobomb are—in my opinion—its “ignition” and “explosive” materials, namely ICG and NH4HCO3, respectively. Some among you may recognize from the name or structure of ICG that it’s a “chemical cousin,” so to speak, of cyanine-3 and cyanine-5 dyes popular for labeling, which BTW are now available from TriLink as NHS esters upon inquiry.

The ICG dye is used to absorb laser light and convert the light’s energy into heat, which then causes NH4HCO3 to very rapidly generate CO2 and NH3 gases and thus release miR-34a (as depicted in part B of the above cartoon from He and coworkers). This “release” aspect deserves the following further comments.

This rhetorical question relates to the “D-word,” i.e. delivery of miR (or other classes of oligo agents) into a cell’s cytoplasmic compartment where it is intended to block target mRNA expression after its release from the endosome/lysosome compartment, as depicted in B above. The following electron micrograph shows what these sub-compartments look like. 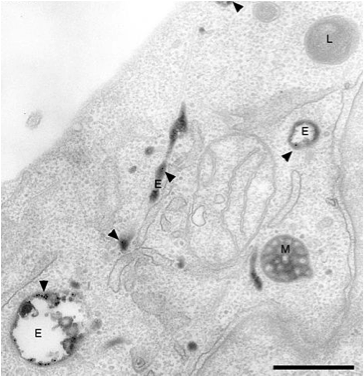 As depicted by He and coworkers, laser light via ICG is used to “ignite” or trigger “explosive” release of miR-34a from these compartments, rather than rely on natural phenomenon or use of pH-sensitive triggering mechanisms. For those of you who are not familiar with the endosome/lysosome compartment, details can be found in the aforementioned review by Prof. Frank Szoka, which was coauthored by Juliane Nguyen.

Is the Nanobomb Effective In Vivo? 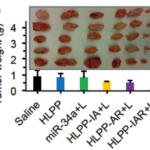 Prof. He and his coworkers carried out extensive controlled experiments in vitro and in vivo to assess efficacy (as well as biodistribution and safety) of their nanobombs, and to me the most compelling data are shown below. Briefly, mice capable of harboring tumors derived from subcutaneously placed human prostate CSCs were treated with various formulations or control, and afterwards the extent of tumor growth was accessed in various ways including by tumor weight. It’s obvious in (C), shown below, that the only statistically significant (*) effect was obtained by the nanobomb formulation.

But is This Nanobomb Practical?

Here’s what He and coworkers state with regard to the scope and practicality of their nanobomb approach:

“Although the tissue penetration of the NIR [near infrared laser>

is limited to less than ~1 cm and multiple polymers are needed for preparing the nanosystem, NIR could be delivered into deep tissue using minimally invasive approaches [e.g. endoscopy>

and the preparation of the nanosystem using the double-emulsion method is quite straightforward. Therefore, the present study demonstrates the great potential of the NIR laser-activated “nanobomb” for microRNA delivery to achieve augmented cancer therapy.”

Time will tell what aspects of this approach will ultimately be reduced to practice in the clinic and/or lead to an approved photodynamic therapy for cancer. However, in the meantime, I’m betting that it will also “ignite” others to explore variations on this symphony of science.

As usual, your comments are welcome.

After this blog was written, Jalani et al. published a paper titled Photocleavable Hydrogel-Coated Upconverting Nanoparticles: A Multifunctional Theranostic Platform for NIR Imaging and On-Demand Macromolecular Delivery. This work is conceptually related—in my opinion—to the above nanobombs in that low energy red-light-absorbing nanoparticles emit higher energy UV light (i.e. photon upconversion) to simulataneously image and release drugs specially absorbed on these nanoparticles. This NIR light penetration, UV imaging, and drug release are said therein to be effective down to a depth of ~2 cm of tissue, which is twice that reported above by He and coworkers.