As we enter October, national breast cancer awareness month, I thought it an appropriate time to review some of the latest advances in breast cancer research. Let’s start with a review of the latest statistics published by the NCI and a look at current treatments, then we’ll explore some of the most promising new research in this field.

According to the National Institutes of Health (NIH) National Cancer Institute (NCI) Cancer Topics for Breast Cancer, the projected statistics on breast cancer for women in the United States in 2013 are grim: 232,340 new cases and 39,620 deaths. Moreover, global statistics for breast cancer were estimated to be over 1.5 million new diagnoses and 500,000 deaths in 2010—with the majority of these being in low and middle income countries, which presents a major challenge of a different kind.

The NIH NCI website provides an informative online booklet entitled What You Need To Know About™ Breast Cancer to learn about breast cancer types, staging, treatment, and questions to ask the doctor. There is also NCI’s overview of Cancer Advances in Focus: Breast Cancer that provides the following perspectives for “today” and “tomorrow.”

As a scientist and taxpayer, you’ll likely be very interested—as I was—in knowing much more about the specifics of what the NCI proposed for managing the Nation’s cancer research portfolio in 2013. This information is nicely laid out at an NCI website that includes a downloadable pdf version with programmatic details and a summary budget ($5.833 Billion).

Among the details that I found particularly interesting is an introductory section called “Provocative Questions.” NCI launched an initiative late in 2010, seeking to go beyond the questions that are self-evident or that have been studied for many years. NCI “asked investigators to propose intriguing questions that need attention but might not otherwise get it or that have stumped us in the past but may be answered by new technologies. The initiative, which elicited a strong and exciting response from the research community, has recently funded its first 56 investigators.” In addition to a link therein for the Provocative Questions Project website, there is a link to a short video wherein NCI Director Harold Varmus, MD, discusses this project. 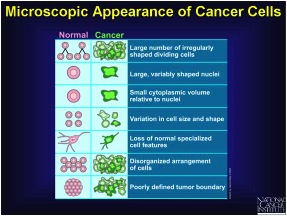 Courtesy of NCI via Bing Images

From the descriptors given in the summary slide, provided by NCI, it is evident that breast cancer cell shape, size, and other properties reflect cellular dysfunctions, relative to normal cells, as is generally characteristic for other types of cancer. The accompanying high-resolution color enhanced scanning electron micrograph (SEM) of a breast cancer cell is visually stunning yet scary in view of the aforementioned death rate statistics.

Spotlight on an Expert

Prof. Esther H. Chang, MD PhD, is a member of the Departments of Oncology and Otolaryngology at the Lombardi Comprehensive Cancer Center of Georgetown University Medical Center. Before joining Georgetown University, Dr. Chang held positions at the National Cancer Institute (NCI), Stanford University, and the Uniformed Services University of Health Sciences. Currently, she is serving as the Interim President of the American Society for Nanomedicine and she is also an Executive Board Member of the International Society for Nanomedicine (ISNM) in Basel. Dr. Chang is the founding scientist of, as well as a Senior Consultant for, SynerGene Therapeutics, Inc. She has over 130 publications and has served as a member of a number of scientific advisory boards for NCI, NASA, the US Military Cancer Institute, and the Department of Energy.

I had the good fortune to become a collaborator of Dr. Esther H. Chang when she was working at the Uniformed Services University of Health Sciences, and I was literally across the street working at the FDA at NIH. We found that we shared a common interest in antisense therapeutics, which at that time (1980s) was a relatively new and—importantly—entirely novel drug development paradigm envisaged as affording more specific, less toxic anticancer agents. My lab could synthesize various chemically modified oligos, but had no molecular or cellular biology expertise. Dr. Chang’s lab at the time was working on Ras, which is a common oncogene in human cancer. We eventually published those initial collaborative investigations, and later reported a series of three papers on tumor-specific targeting and delivery of modified hybrid (DNA-RNA) anti-HER-2 siRNA analogs developed by TriLink (click here for details).

As scientists, we can appreciate the need to occasionally over simplify very complex technical concepts, and scientific jargon, in order to talk to nonscientists about our research. Consequently, I had to smile with appreciation when Dr. Chang referred to tumor cell-specific, targeted delivery of liposomal nanoparticles as involving “tiny little FedEx trucks” when interviewed on National Public Radio that can be listened to by clicking here.

Dr. Chang’s use of this catchy metaphor is apropos for a couple of reasons. Just as trucks carry various types of cargo, liposomal nanoparticles (spheres pictured) can be loaded with various classes of therapeutic agents, ranging from traditional small-molecule entities to high-molecular weight genes, mRNAs, and mi/siRNA. Also, just as FedEx employs advanced technologies to locate ZIP-code intended-recipients, nanoparticles can utilize antibodies, fragments of antibodies (Y-shaped molecules pictured above) or other agents (ligands) for specific delivery to intended target cells via binding to cell surface receptors (pink molecules pictured above).

Based upon these promising results, this nanodelivery system has moved in human clinical trials. When I asked Dr. Chang about the status of such trials, and whether these results were applicable is some way to breast cancer, she offered the following comments:

“Tumor specificity is very crucial to a cancer therapy’s efficacy,” Chang asserts. “Because we have a targeting moiety, the nanocomplex will travel through the bloodstream and whenever it encounters a tumor cell — whether a primary tumor or metastasis — the nanoparticle will bind to it, enter the tumor cell and destroy it.”

This tumor targeted nanomedicine delivering the p53 gene (SGT-53) has already completed a Phase I safety trial, the results of which were described in an article entitled Phase I Study of a Systemically Delivered p53 Nanoparticle in Advanced Solid Tumors published in May of this year. The purpose of this trial was to give back to cancer patients the tumor-busting p53 gene they have lost.

She continued, “We were very encouraged by the results since the patients handled SGT-53 very well.  Only minimal side effects occurred. Even more exciting, at the end of treatment the majority of patients showed at least stable disease. We were also able to demonstrate targeted delivery of SGT-53 to metastatic cancer, and not to normal cells. These agents are intended to increase the effects of standard therapies by sensitizing the tumor cells to their killing effects. Thus, cancer is less likely to recur. We have seen fantastic anti-cancer responses in animal models with breast cancer, and we have seen this treatment working in various types of solid tumors in patients. Therefore, we think it is very likely that it will also be successful in treating breast cancer.”

More on Nanomedicine for Cancer Therapy

Researchers in nanomedicine (a term first used in the late 1990s) aim to develop a variety of revolutionary tools:

As with any scientific field, its boundaries blur with those of related fields, including pharmaceutics, bio- and materials engineering, nuclear medicine, tissue engineering, and many others. 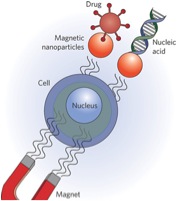 Earlier this year, Shigdar et al. reported the use of sensitive “chemical antibodies” for diagnosis in breast cancer. They state that Epithelial cell adhesion molecule (EpCAM) is expressed at low levels in a variety of normal human epithelial tissues, but is overexpressed in 70–90% of carcinomas. From a clinico-pathological point of view, this has both prognostic and therapeutic significance. EpCAM was first suggested as a therapeutic target for the treatment of epithelial cancers in the 1990s. However, following several immunotherapy trials, the results have been mixed. It has been suggested that this is due, at least in part, to an unknown level of EpCAM expression in the tumors being targeted. Thus, selection of patients who would benefit from EpCAM immunotherapy by determining EpCAM status in the tumor biopsies is currently undergoing vigorous evaluation. However, current EpCAM antibodies are not robust enough to be able to detect EpCAM expression in all pathological tissues. Shigdar et al. go on to report a newly developed EpCAM RNA aptamer, also known as a chemical antibody, which is not only specific but also more sensitive than current antibodies for the detection of EpCAM in formalin-fixed paraffin-embedded (FFPE) primary breast cancers.

Twenty-mer aptamers were chemically synthesized with 2′-fluoro- or 2′-O-methyl-pyrimidine bases, a 3′-inverted deoxythymidine, and 5′-fluorescent tags. One of these aptamers showed no non-specific staining or cross-reactivity with tissues that do not express EpCAM. They were able to reliably detect target proteins in breast cancer xenograft where an anti-EpCAM antibody showed limited or no reactivity. They conclude that these results show the potential of aptamers in the future of histopathological diagnosis and as a tool to guide targeted immunotherapy.

I hope you leave this blog inspired by the promising developments that have been made in the field of breast cancer research and optimistic about the strides we, as a research community, continue to make toward finding a cure.

On September 12th, the Washington Post reported online that the FDA’s panel of cancer experts voted 13-0, with one abstention, that the benefits of Perjeta (a monoclonal antibody developed at Genentech) as an initial treatment for breast cancer outweigh its risks. The recommendation is not binding, but sets the stage for the FDA to clear the drug as the first pharmaceutical option approved to shrink or eliminate tumors before surgery. “We are supporting the movement of a highly active drug for metastatic breast cancer to the first-line setting, with the hope that women with earlier stages of breast cancer will live longer and better,” said Dr. Mikkael Sekeres, an associate professor of medicine at the Cleveland Clinic. Doctors hope that using cancer drugs earlier could help shrink tumors, making them easier to remove. In some cases, that could allow women to keep their breasts, rather than having a full mastectomy.

Perjeta works by blocking signals inside cancer cells that would tell them to divide and grow Photo: Roche (taken from itv.com via Bing Images). Differences between HER family receptors are described here.