Human DNA identity analysis is now commonplace methodology that’s frequently featured in newspaper stories, TV crime series, or “who dun it” movies. The same principle (i.e. using a characteristic DNA pattern or signature) applies to identification of all animals, birds, insects, and microbes. Actually, DNA barcoding extends to any organism, whether it is alive or has been dead for hundreds of thousands of years (so long as it’s preserved by fossilization). 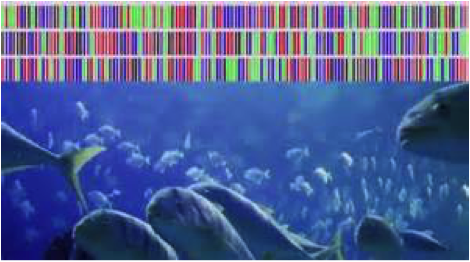 Marine biologists face a serious challenge with accounting for very diverse forms of marine life that exists in a mindboggling huge volume of water. Consequently, it’s not surprising that analysis of water-borne, marine DNA barcodes—as proxies for going to and counting fish—is rapidly trending in utility and importance. Known formally as environmental DNA (eDNA), the aquatic version has been humorously referred to as ocean ‘dandruff’ by Christopher Jerde of the University of Nevada in Reno (which, ironically, is landlocked and distant from any ocean.) But I digress. Before diving further (pun intended) into ocean dandruff, let’s briefly review the background of DNA barcoding. 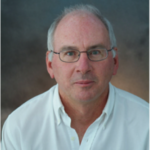 In 2003, Prof. Paul Herbert and coworkers in the Department of Zoology at the University of Guelph in Canada published a seminal study titled Barcoding animal life: cytochrome c oxidase subunit 1 (CO1) divergences among closely related species that fundamentally changed the field of taxonomy. In a nutshell, Herbert’s team showed it was feasible to classify millions of species based only on DNA sequence of the mitochondrial gene CO1. In the intervening, relatively short amount of time, there have been thousands of publications dealing with applications and extensions of this concept, which is now recognized to be very powerful and promising albeit with some limitations.

Typically, DNA barcodes are identified by sequencing after PCR amplification of one or more specific genetic loci such as CO1. Following proof that a DNA barcode can differentiate the species of interest, single- or multiplex quantitative PCR (qPCR) can be used to enumerate relative amounts of sample from the field.

The advent of high-throughput sequencing technologies applicable to complex mixtures of individually tagged samples then gave rise to “metabarcoding,” about which interested readers can consult many publications for specific topics.

Craig Venter steers his research yacht, Sorcerer II, under the Sydney Harbour Bridge in his quest to collect microbes from the world's waters. Photo: Dallas Kilponen. Taken from smh.com.au

BTW, among the many pioneering scientific ventures by uber-famous Craig Venter, is his Global Ocean Sampling Expedition aboard his research yacht, Sorcerer II. The expedition is a quest to unlock the secrets of the oceans by sampling, sequencing and metabarcoding DNA of all (or most) microorganisms living in these waters.

Lest you think this was a well-intended but unproductive journey—some say junket—by Venter and coworkers, here’s a link to peruse 16 resultant publications that I found by searching PubMed. To watch and listen to Venter talk about this work, you can click here for an educational and entertaining—as usual with Venter—TED Talk on Sampling the Ocean’s DNA that’s had over 550,000 views!

Now that we’ve covered the basics of DNA barcoding and metabarcoding, let’s turn back to ocean dandruff. Dandruff, simply put, is dead skin cells. Using dandruff as an intended witty metaphor for ocean eDNA is a bit misleading as marine eDNA is comprised of a complex mixture of cellular matter from scales, feces, decomposing tissue, etc. of fish and all other present or past sea creatures. Consequently, the design and specificity of primers for PCR is of paramount importance for obtaining—let alone interpreting—DNA barcodes based on fragment size or sequence.

As reported by Miya et al., monitoring the occurrence of fish species-specific eDNA PCR fragments (~70–300 bp) has traditionally used conventional electrophoretic gel separation and detection. More recently, qPCR using fluorogenic probes has been employed owing to the method's sensitivity, specificity and potential to quantify the target DNA. For example, it has been possible to accurately estimate the biomass of common carp in a natural freshwater lagoon using qPCR of eDNA concentrations and biomass in aquaria and experimental ponds.

Miya et al. also describe the development of a set of PCR primers for metabarcoding mitochondrial DNA of 880 species of fish. They sampled eDNA from four tanks with known species compositions, prepared dual-indexed libraries and performed paired-end sequencing. Out of the 180 marine fish species contained in the four tanks, they detected 168 species (93.3%) distributed across 59 families and 123 genera. That’s quite an impressive accomplishment.

Since there are so many fish-related applications of DNA barcodes, I’ve selected several recent examples that are indicative of the utility of ocean ‘dandruff’—and are quite interesting, in my opinion. The first case in point exemplifies how eDNA can be used to deal with rare and endangered species, which are either very hard to find or can be dangerously distressed by catching to obtain samples.

Green Sturgeon—Bergman et al. report that a decline in abundance of North American Green Sturgeon located in California’s Central Valley has led to its listing as Threatened under the Federal Endangered Species Act in 2006. While visual surveys of spawning by these Green Sturgeon are effective at monitoring fish densities in concentrated pool habitats, results do not scale well—pun intended. By contrast, eDNA provides a relatively quick, inexpensive tool to efficiently identify and monitor Green Sturgeon DNA. 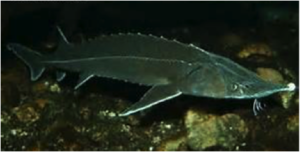 These investigators concluded that follow-on work based on this first-ever eDNA study of Green Sturgeon has the potential to provide better knowledge of the spatial extent of Green Sturgeon spawning that could help identify previously unknown spawning habitats and discover factors influencing habitat usage, guiding future conservation efforts.

In brief, this team of researchers from several universities and the Monterey Bay Aquarium Research Institute found that eDNA assessments picked up almost all the organisms scuba divers spied underwater—plus many more that human eyes missed. Here’s some detail on how they did this.

At each scuba survey location as well as at sites offshore, ~1 gallon of water was sampled several feet above the bottom. Four types of habitats were sampled: sea grass beds, Monterey Bay’s unique “Kelp Forest,” sandy areas and rocky reefs. Onshore, in a “clean” (DNA-free) lab, these water samples were filtered to collect cells containing eDNA for storage at −80 °C until eDNA extraction at a university clean lab. A vertebrate‐specific primer set targeting a small region of the mitochondrial DNA 12S rRNA gene was used for PCR followed by gel purification. 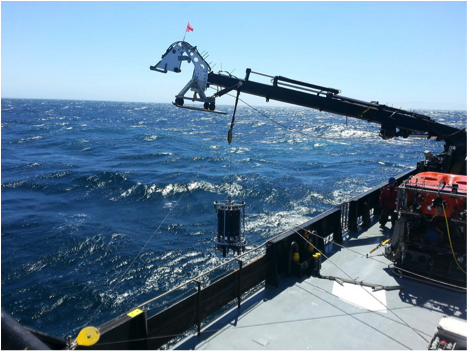 After quantification, pooled amplicons (each having a sample index sequence) were paired-end sequenced on the Illumina MiSeq platform using a 20% PhiX spike‐in control to improve the quality of low‐diversity samples. The conclusions are worth quoting because—in my opinion—the findings represent a new era in marine biology based on nucleic acid analysis:

“We find spatial concordance between individual species’ eDNA and visual survey trends, and that eDNA is able to distinguish vertebrate community assemblages from habitats separated by as little as ~60 meters. eDNA reliably detected vertebrates with low false‐negative error rates (1/12 taxa) when compared to the surveys, and revealed cryptic species known to occupy the habitats but overlooked by visual methods. This study also presents an explicit accounting of false negatives and positives in metabarcoding data, which illustrate the influence of gene marker selection, replication, contamination, biases impacting eDNA count data and ecology of target species on eDNA detection rates in an open ecosystem.”

Restated more simply, eDNA analysis of the water picked up 11 of the 12 fish and marine mammals that the divers observed, and—importantly—identified 18 additional animals the divers missed! The efficiency and improvement offered by eDNA analysis compared to traditional seek-and-count methods has been echoed in an editorial I found by Hoffmann et al. titled, tongue-in-cheek, Aquatic biodiversity assessment for the lazy.

Gobies are an invasive fish species that has colonized freshwaters and brackish waters in Europe and North America. One of them, the round goby (Neogobius melanostomus), pictured below, is among the worst invaders in Europe. Current methods to detect the presence of these gobies are labor intense and not very sensitive. Consequently, populations are usually detected only when they have reached high densities and when management or containment efforts are futile.

To improve monitoring, Swiss and Canadian collaborators developed an assay based on the detection of eDNA in river water, without detecting any native fish species, which is obviously an important assay criterion. The eDNA assay requires less time, equipment, manpower, skills, and financial resources than conventional monitoring methods such as electrofishing, angling or diving. Samples can be taken by novices and the assay can be performed by any molecular biologist on a conventional PCR machine. Therefore, this assay enables environment managers to map invaded areas independently of fishermen’s reports and fish community monitoring.

I could go on and on with examples of utility and the many advantages provided by eDNA for marine biology, but I’m sure you get the picture. I hope that you agree with me that eDNA analysis is a very valuable type of trending nucleic acid-based methodology.

As usual, your thoughts or comments are welcomed.