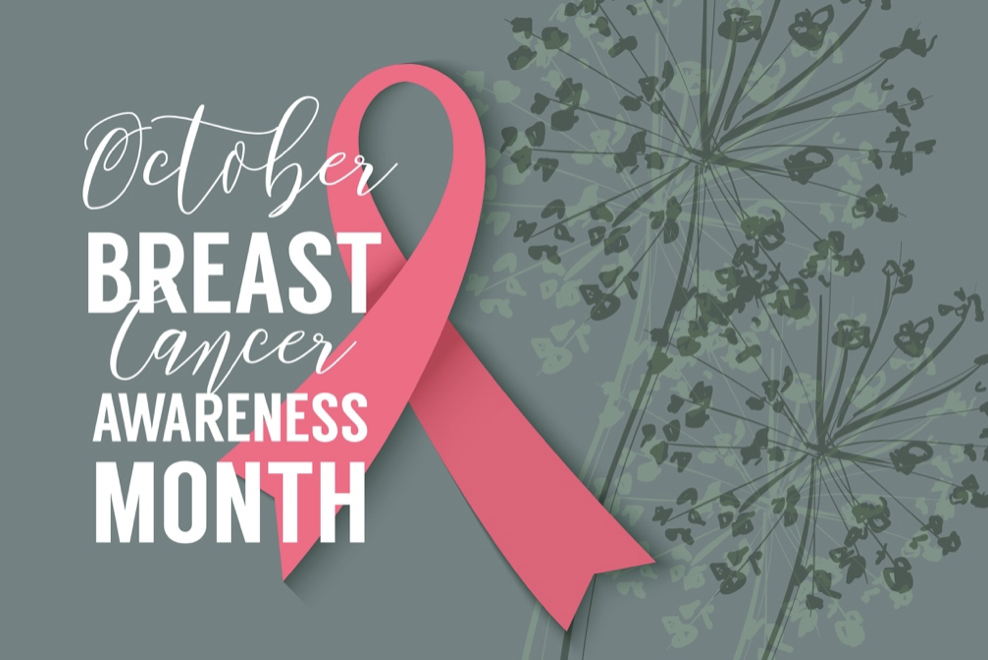 Every October, Breast Cancer Awareness Month (BCAM) is an annual international health campaign organized by major breast cancer charities in an effort to increase awareness of the disease, and raise funds for research into its cause, prevention, diagnosis, treatment, and cure. The campaign also offers information and support to those affected by breast cancer.

BCAM was launched in October of 1985 as a partnership between the American Cancer Society and the pharmaceutical division of Imperial Chemical Industries, which is now part of AstraZeneca, producer of several anti-breast cancer drugs. The Breast Cancer Research Foundation, established in 1993, adopted the now iconic pink ribbon as its symbol, which had been introduced two years earlier when the Susan G. Komen Foundation had handed out pink ribbons to participants in its New York City race for breast cancer survivors.

A variety of BCAM events around the world are organized in October, including walks and runs near you, which can be easily found using Google. Additionally, landmark buildings all over the world are illuminated in pink, including the White House, Buckingham Palace, and Tokyo Tower. This blog will provide introductory statistics about breast cancer, as well as information regarding conventional detection and standard treatment. Then, the focus will shift towards the importance of early detection using recently reported microRNA (miRNA) and cell-free DNA (cfDNA) tests. Readers interested in more comprehensive information about all aspects of breast cancer can consult these links to the US National Cancer Institute and Food & Drug Administration. 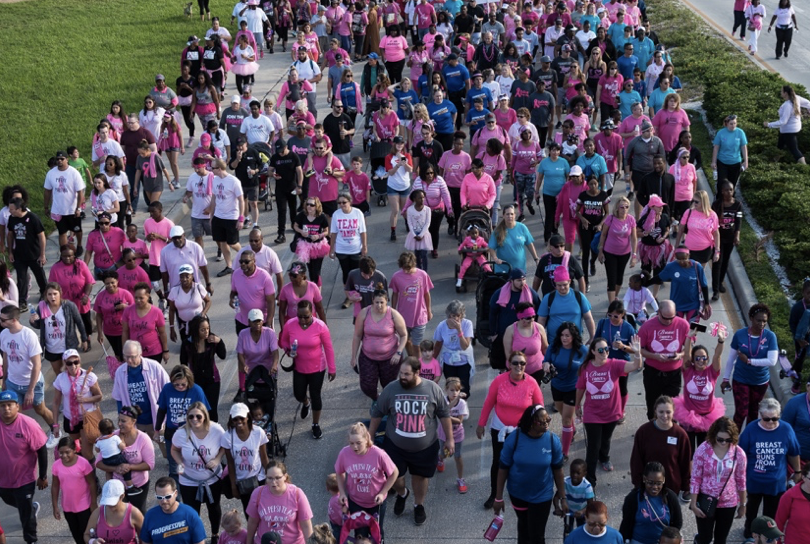 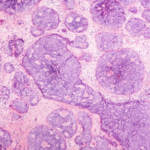 Breast cancer core biopsy. Ductal in situ carcinoma detected by screening mammography. Tumor cells are confined to the mammary ducts. There is branching and budding with no invasion present.

A woman living in the US has a 12.4% or a 1-in-8 lifetime risk of being diagnosed with breast cancer. The age-specific 10-year probabilities of US women developing invasive breast cancer are listed here, whereas incidence and death rates for female breast cancer by race/ethnicity and geographical location in the US can be found elsewhere. 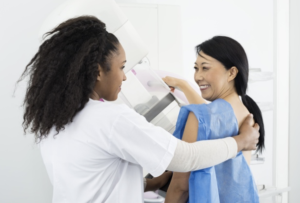 Based on the results of eight randomized trials, namely the NIH-ACS Breast Cancer Detection Demonstration Projects published in 1988, and other research studies that collectively showed that mammographic screening (pictured below) can reduce the mortality from breast cancer, routine mammographic screening is an accepted standard for the early detection. However, as discussed in the following section, there is considerable recent interest in improving early detection through the utlization of nucleic acid-based testing. 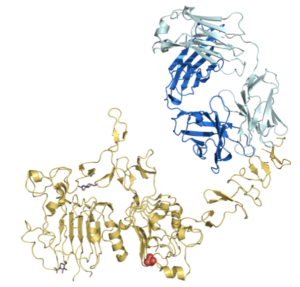 Ribbon diagram of the Fab fragment of trastuzumab bound to the extracellular domain of HER2. Taken from commons.wikipedia.org and free to use.

According to an NIH summary, breast-conserving surgery (lumpectomy) followed by local radiation therapy has replaced mastectomy as the preferred surgical approach for treating early-stage breast cancer. Combination chemotherapy is a standard of care in the adjuvant treatment of operable breast cancer. The goal of this systemic therapy is to eradicate cancer cells that may have spread beyond the breast.

The monoclonal antibody trastuzumab is an accepted treatment for breast cancers that overproduce a protein called human epidermal growth factor receptor 2, or HER2. This protein is produced in abnormally high amounts by about 20% of breast tumors, which tend to be more aggressive and more likely to recur. Trastuzumab targets the HER2 protein specifically, as depicted here, and this antibody, in conjunction with adjuvant chemotherapy, can lower the risk of recurrence of HER2-overproducing breast cancers by about 50%, when compared to chemotherapy alone.

Several breast cancer susceptibility genes have now been identified, including BRCA1, BRCA2, TP53, and PTEN/MMAC1. Approximately 60% of women with an inherited mutation in BRCA1 or BRCA2 will develop breast cancer sometime during their lives, compared to about 12% of women in the general population. Women with inherited BRCA1 or BRCA2 gene mutations also have an increased risk of developing ovarian cancer. These genetic links to breast cancer scientifically segue to the next sections on early detection using miRNA and cfDNA tests. 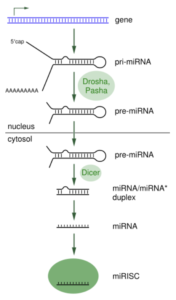 Overview of miRNA processing, from transcription to the formation of the effector complex. Taken from commons.wikimedia.org and free to use.

An miRNA is a small non-coding RNA molecule (containing about 22 nucleotides) that functions in RNA silencing and post-transcriptional regulation of gene expression by following their processing, as depicted here. miRNAs function via base-pairing with complementary sequences within mRNA molecules. As a result, these mRNA molecules are silenced by one or more of the following processes: (1) cleavage of the mRNA strand into two fragments, (2) destabilization of the mRNA through shortening of its poly(A) tail, or (3) less efficient translation of the mRNA into proteins by ribosomes.

As described elsewhere, miRNAs resemble the small-interfering RNAs (siRNAs) of the RNA interference (RNAi) pathway. However, miRNAs derive from regions of RNA transcripts that fold back on themselves to form short hairpins, whereas siRNAs derive from longer regions of double-stranded RNA. An analysis published in 2015 indicates that the number of human miRNAs is approximately 600. According to a review by Bertoli et al., dysregulation of miRNAs is involved in the initiation and progression of several human cancers, including breast cancer, as strong evidence has been found that miRNAs can act as oncogenes or tumor suppressor genes. The researchers add that some miRNAs have emerged as biomarkers of breast cancer diagnosis, or as indicators for prediction of therapeutic outcomes. Other miRNAs are of interest as new, easily accessible, affordable, non-invasive biomarkers for the personalized management of patients with breast cancer because they are circulating in body fluids.

Since 2015, there are 16,100 articles in Google Scholar that contain both the words “microRNA” and “biomarkers” alongside the phrase “breast cancer” anywhere in the article, which includes patents but excludes citations. Google Scholar can list these articles by date or relevance. The latter is possible thanks to algorithmic methodology described elsewhere, and provides a very useful way to find relatively high-impact items, which are listed in the first few pages.

Below are the titles for the first ten articles found in this search, together with an abbreviated citation with date and the “cited by” number in parentheses. 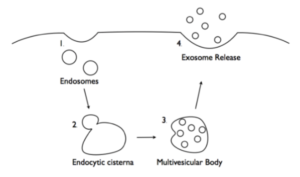 Formation of exosomes, which are extracellular vesicles. Taken from commons.wikimedia.org and free to use. 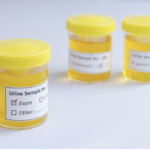 I think it’s is worth emphasizing that several of the aforementioned highly relevant articles feature either exosome-encapsulated miRNAs, or cell-free miRNAs. These are physically distinct types of miRNA that can be studied independently, as reported by Endzeliņš et al. in 2017 in a publication titled Detection of circulating miRNAs: comparative analysis of extracellular vesicle-incorporated miRNAs and cell-free miRNAs in whole plasma of prostate cancer patients. In this particular study, it was found that only a small fraction of the total cell-free miRNA was recovered from plasma extracellular vesicles (EVs). However, the EV-incorporated and whole plasma cell-free miRNA profiles were clearly different. 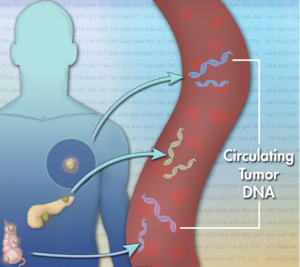 Release of cell-free circulating tumor DNA originating from several different types of tumors. Taken from commons.wikimedia.org and free to use.

According to a 2019 review by Yu et al., cells can release cfDNA that circulates in the bloodstream, as depicted here. More specifically, the cfDNA released from tumor cells is sometimes referred to as circulating tumor DNA (ctDNA). Although cfDNA is also present in healthy individuals, it is significantly increased in cancer subjects. cfDNA is recognized as a novel biomarker in the diagnosis of several types of cancer, including breast cancer. There are several detection strategies for breast cancer by cfDNA, such as the concentration of cfDNA, cfDNA integrity, microsatellite alteration, gene mutations, DNA methylation, and more.

When the Google Search of microRNA biomarkers for breast cancer was repeated with substitution of “cell-free DNA” for “microRNA,” 14,900 articles were found since 2015. Below are the titles for the initial (i.e. most relevant) ten articles detected by this search, alongside an abbreviated citation with date and the “cited by” number in parentheses. 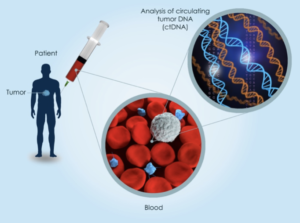 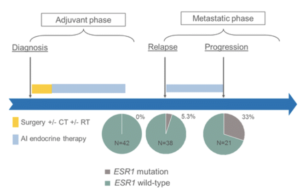 The sheer amount of Google Scholar articles I was able to find on miRNA and cfDNA biomarkers for detection of breast cancer point towards promising future clinical practices that may enable improved methods for earlier detection. This will become especially true if safe, simple, and convenient collection methods, such as blood or urine samples, could be used instead of invasive biopsies. 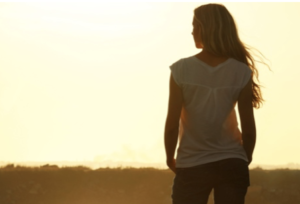 After this blog was written, I was able to find an FDA website that provides a comprehensive list of  nucleic acid-based tests that have been cleared or approved by the Center for Devices and Radiological Health. These tests analyze variations in the sequence, structure, or expression of DNA or RNA in order to diagnose disease, medical conditions, or an infection by an identifiable pathogen. The tests can also determine genetic carrier status. This list includes nucleic acid-based companion diagnostic tests. There are currently 16 tests listed for breast cancer, each with a link to detailed information, as exemplified by an in situ hybridization (ISH) product available from Ventana Medical Systems, part of the Roche Group. 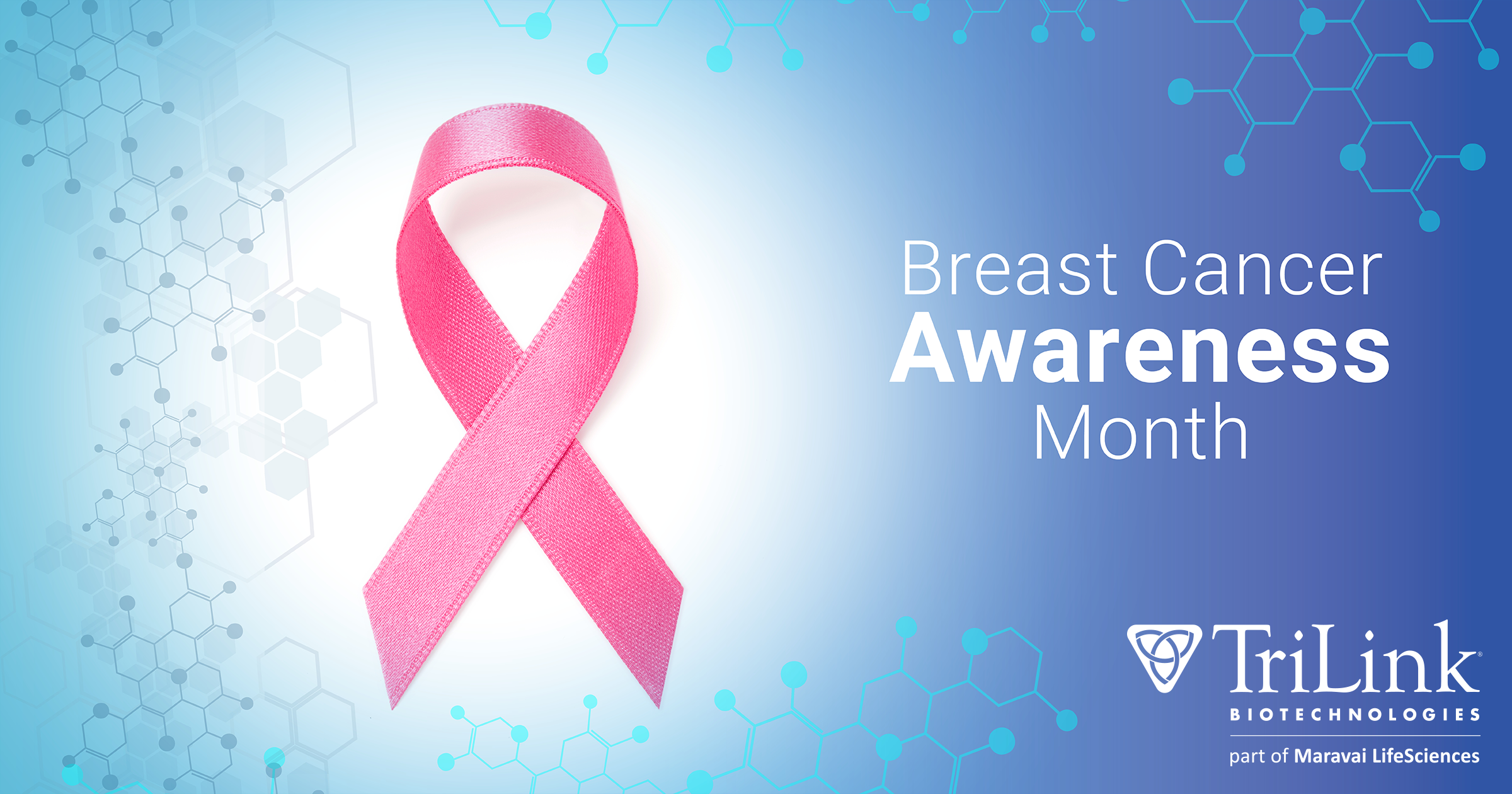