In vitro–synthesized mRNA is widely viewed as an attractive non-viral gene replacement tool with many inherent advantages, including rapid protein production and efficient transduction of primary cells, as reviewed elsewhere. Therapy using mRNA also avoids deleterious side effects (e.g. integration into chromosomes), which are known to limit the clinical applications of most virus- and DNA-based vectors.

Pseudouridine. Taken from commons.wikimedia.org and free to use.

Although the first in vivo gene transfer therapy using native (i.e. unmodified) mRNA was reported in Science in 1990, its use was quite limited due to its high immunogenicity and low effectiveness. Following the 2008 publication by Karikó et al., who found that incorporation of pseudouridine (Ψ) into mRNA yields a superior nonimmunogenic vector with increased translational capacity and biological stability, this situation changed dramatically.

Since then, a flurry of studies utilized (Ψ) and explored a wide variety of other base modifications, as discussed in a TriLink poster titled Strategies to Minimize Innate Immune Stimulation to Maximize Messenger RNA Bioavailability. This interest in in vitro-transcribed modified mRNA is reflected by the annual number of publications found in the NIH PubMed database and shown here. 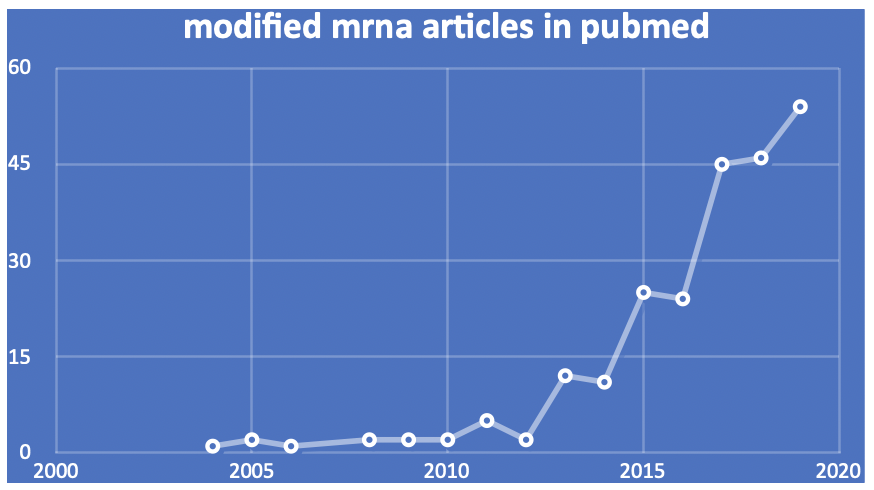 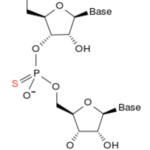 Phosphorothioate linkage in RNA; stereochemistry at phosphorus not shown. Taken from commons.wikimedia.org and free to use.

While the vast majority of publications on chemically modified mRNA involve changes in the structure of nucleobases, an early 1991 publication by Ueda et al. demonstrated that RNA containing nuclease-resistant phosphorothioate (PS) linkages, depicted here, could function as mRNA in a cell-free translation system. Despite these intriguing findings and the subsequent emergence of modified mRNAs as potential vaccines and therapeutics, PS-modified mRNA has not received much attention. Nonetheless, new and promising insights on the utility of PS-modified mRNA have been reported by Abe et al. Importantly, it was found that protein yield increased 22‐fold when PS modifications were introduced into the region from the 5'‐end to the initiation codon.

PS modification converts the achiral phosphorus atom in the phosphodiester (PO) linkage into a chiral center. Thus, each PS linkage can take either Sp or Rp configurations, as depicted here for DNA. RNA sequences with PS modifications can be prepared diastereoselectively by a transcription reaction using T7 RNA polymerase, with a substrate nucleotide triphosphate (NTP) in which PS is introduced at the α-position (NTPαS). In this reaction, the T7 RNA polymerase uses only NTPαS in the Sp form as a substrate, forming a PS linkage in the Rp configuration because the reaction proceeds through inversion of configuration. 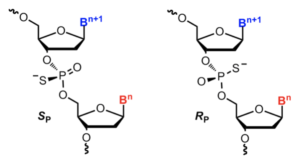 Phosphorothioate Sp and Rp diastereomeric linkages in DNA. Taken from commons.wikimedia.org and free to use.

Initially, Abe et al. designed FLAG-EGF, an mRNA sequence model that encodes the Shine-Dalgarno sequence (a ribosomal binding site in bacterial and archaeal messenger RNA ~8 bases upstream of the start codon AUG), three repeats of the FLAG octapeptide-coding sequence, and the epidermal growth factor (EGF)-coding sequence. Using T7 RNA polymerase and a PCR-amplified dsDNA template, FLAG-EGF was prepared by in vitro transcription. PS-mRNA was prepared by substituting one or more NTPs with the corresponding NTPαSs obtained from TriLink BioTechnologies, each of which was confirmed by HPLC to be comprised of an approximately equivalent mixture of Rp and Sp diastereomers (see Abe et al. Supporting Information Figure S1). Because T7 RNA polymerase has been shown to use only the Sp form as a substrate and the Rp form does not inhibit transcription, Abe et al. used the mixture of NTPαS diastereomers.

DNA encoding FLAG-EGF was then used to transcribe PS-mRNA with the following 15 possible combinations of unmodified NTPs and NTPαSs, wherein A, U, G and C refer to the NTPαS substrate(s) in in each transcription reaction mixture:

Transcription reactions were analyzed by denaturing polyacrylamide gel electrophoresis (PAGE). The gels were stained and the relative amount of RNA transcript was calculated by comparison to the transcript obtained from use of unmodified NTPs. From the relative band intensities for transcription, given in the chart shown here, Abe et al. concluded that “the relative yield generally decreased as the number of substituted NTPαS increased.” This was consistent with the abovementioned report by Ueda et al. in 1991. 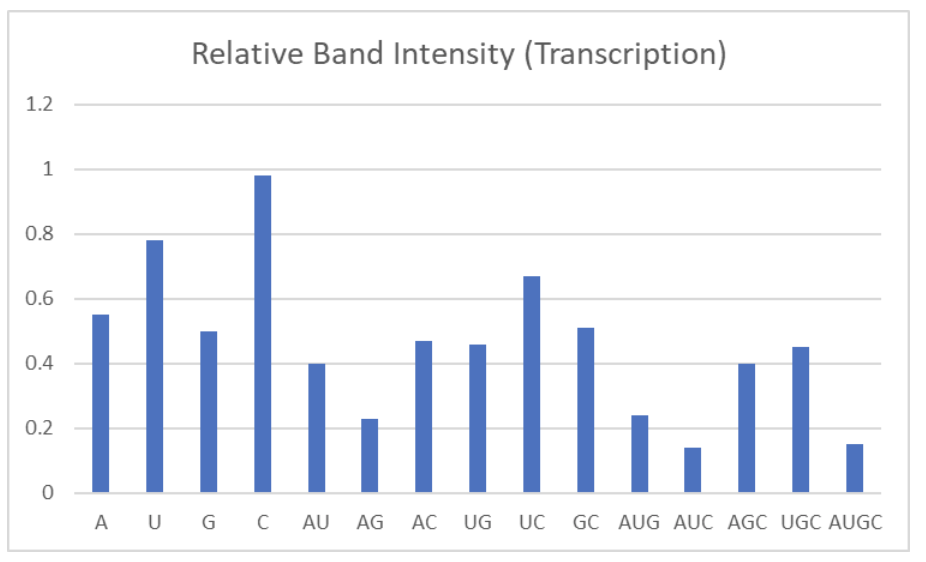 PURE (Protein synthesis Using Recombinant Elements), the previously reported Escherichia coli-based reconstituted cell-free protein synthesis system, was used to measure relative translation efficiency of the resultant PS-mRNAs, as PURE is free of RNA and protein degrading enzymes. Western blot analysis was used to calculate the relative amount of translation product obtained from each of the 15 PS-mRNAs compared to that obtained from unmodified PO-mRNA.

As seen from the relative band intensities for translation in this chart, 12-of-15 PS-mRNAs demonstrated an equal or higher yield than that obtained by PO-mRNA, which is by definition set to 1. When CTPαS was used, the highest relative ratio was 3.1. Among the PS-mRNAs with two nucleotides replaced with NTPαS, the highest ratio was 2.2 when UTPαS and CTPαS were used. Abe et al. concluded that “[t>

he tolerance of PS modification seemed to decrease as the number of substituted NTPαS increased.” 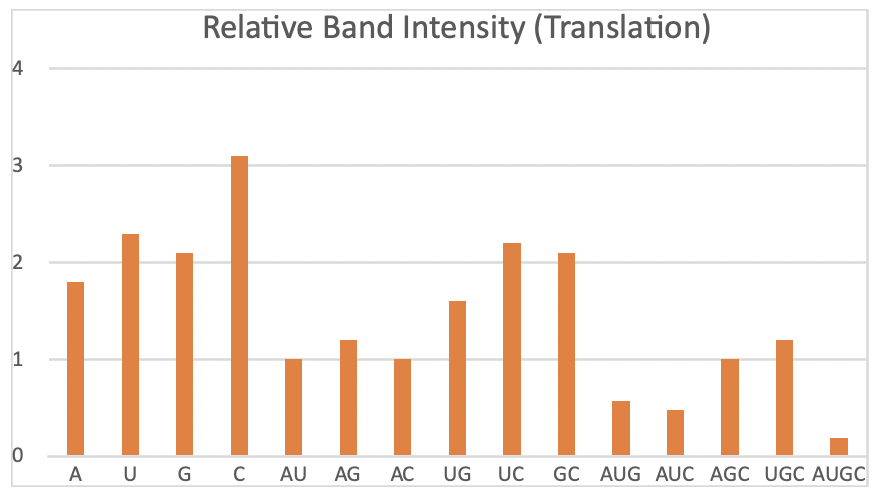 Two other sequences were then examined for any generality in the enhancement of translation efficiency by the PS modifications observed with FLAG-EGF. One NTP was replaced with the corresponding NTPαS when firefly luciferase (Fluc)mRNA or AcGFP (a green fluorescent protein derived from Aequorea coerulescens) mRNA were in vitro synthesized, and the amount of translation product from each PS-mRNA was compared to the amount derived from PO-mRNA counterparts. As evidenced by this results chart, all PS-mRNAs led to increased translation—up to 12-fold—compared to their corresponding PO counterpart. 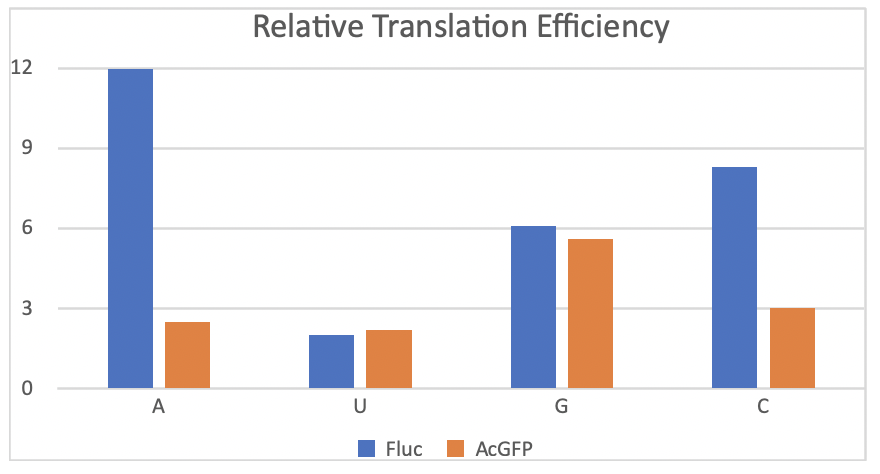 Abe et al. then examined why PS introduction into FLAG-EGF mRNA improves translation efficiency. The stability of PS(C,U)-mRNA, which was transcribed by substituting CTP and UTP with CTPαS and UTPαS, respectively, was compared to the stability of PO-mRNA by incubating in the translation mixture and then quantifying by RT-PCR (Abe et al. Supporting Information Figure S3). No significant difference in stability was observed between the two mRNAs, a finding consistent with the reduced levels of nucleases in the PURE system. Having thus ruled out instability of PS mRNA as a contributing factor for improved translation efficiency, the researchers focused on the mechanism of the translation reaction.

Ribosomal translation proceeds via three major steps: initiation, elongation, and termination, as depicted here. Of these, the initiation step, in which the ribosome forms a complex, is the slowest and therefore the rate-limiting step, as reviewed elsewhere. In light of this, Abe et al. hypothesized that the introduction of PS linkages into mRNA would increase the rate of initiation, leading to improved translation efficiency. To prove this hypothesis, the initial rate of translation was analyzed in the following manner. 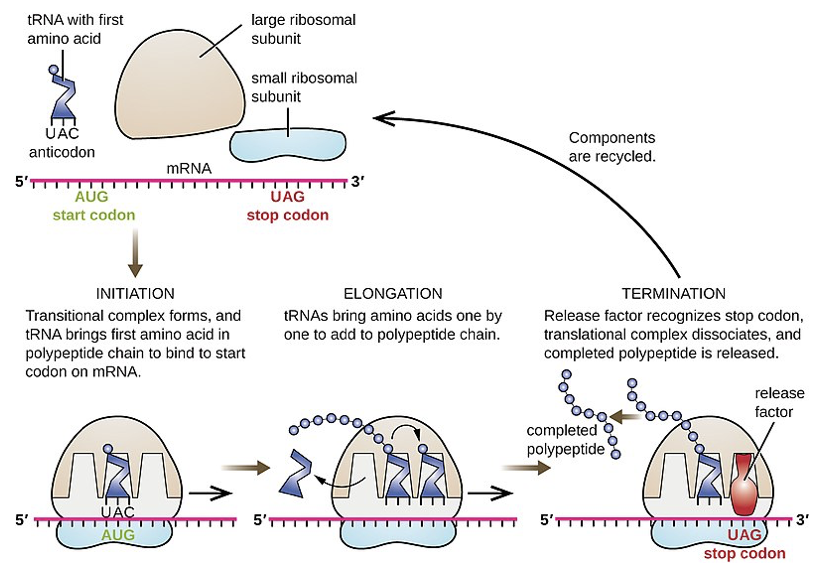 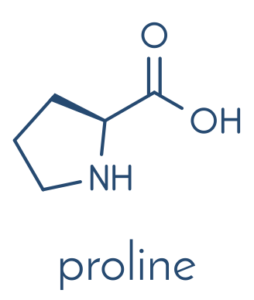 To capture the initial rate of translation, a single-turnover experiment in which ribosomes did not dissociate was established. The introduction of more than three proline (Pro) repeats at the end of a protein sequence has been reported to cause the ribosome to pause prematurely in the absence of elongation factor P. Therefore, the translation reaction was carried out using FLAG-EGF-Pro3 mRNA, in which three repeats of the proline codon CCA were introduced at the end of the FLAG-EGF mRNA. PS(C,U)-mRNA encoding FLAG-EGF-Pro3 was prepared by substituting CTP and UTP with CTPαS and UTPαS, respectively, and the translation product was compared to the one of the non-modified counterpart.

The time-course of the 37-kDa product from PO-mRNA and PS(C,U)-mRNA is shown here. According to Abe et al., the x intercepts of PO- and PS(C,U) mRNA were 0 min and 1.5 min, respectively, indicating that the rates of peptidyl elongation in translation of PO-mRNA were faster than those in translation of PS(C,U)-mRNA. The slope of each graph represents the initial rate of translation, with PS(C,U)-mRNA being approximately two-times faster than PO-mRNA. Because the rate-determining step in the translation reaction is the initiation step, PS modification appears to promote the formation of the ribosomal initiation complex. 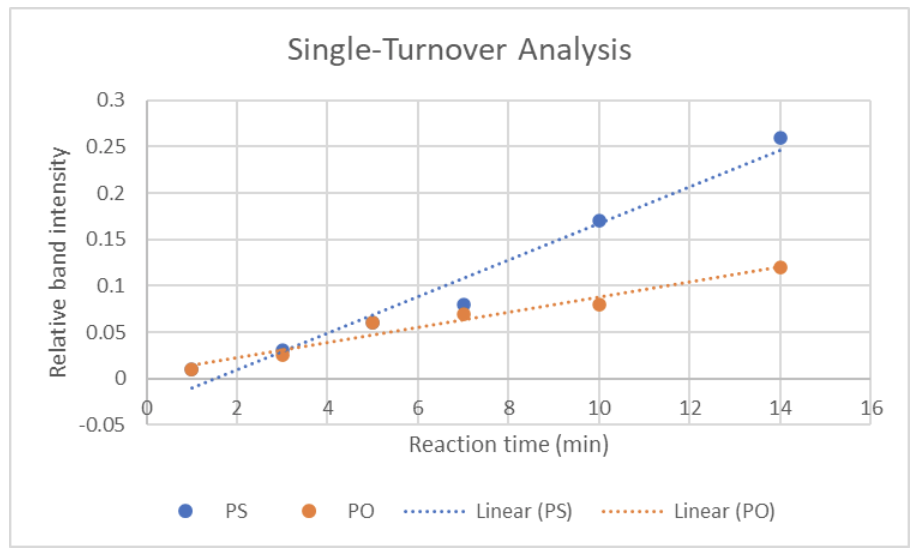 Finally, Abe et al. evaluated the double-strand forming ability of PO-, PS(C)-, and PS(C,U)-mRNAs using the RiboGreen reagent, which fluoresces at the site of duplex formation in RNA. The relationship between fluorescence intensity and temperature revealed that the secondary structure of PS-mRNA was slightly more stable than that of PO-mRNA. 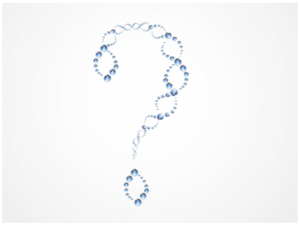 While the experimental results reported by Abe et al. indicate that PS incorporation only at the 5’ end of the studied mRNAs can strongly promote initiation of translation and increase protein production, the underlying mechanistic reasons remain to be elucidated.

In a discussion of possible answers, Abe et al. cite an earlier report by Del Campo et al., who combined three sequencing approaches to provide a high-resolution view of global mRNA secondary structure, translation efficiency, and mRNA abundance to unravel structural features in E. coli mRNA with implications in translation and mRNA degradation. Among the conclusions, Del Campo et al. state that “[a>

poorly structured site upstream of the coding sequence serves as an additional unspecific binding site of the ribosomes and the degree of its secondary structure propensity negatively correlates with gene expression.”

ormation of other higher-order RNA structures or other factors are most likely involved in promoting the ribosomal initiation complex, which should be elucidated in the future.”

Given the growing importance of using modified mRNAs as potential vaccines or therapeutics, the Zone hopes that, regardless of mechanism, Abe et al.’s promising findings on 5’-end PS-modified mRNA stimulate follow-up by the mRNA scientific community. 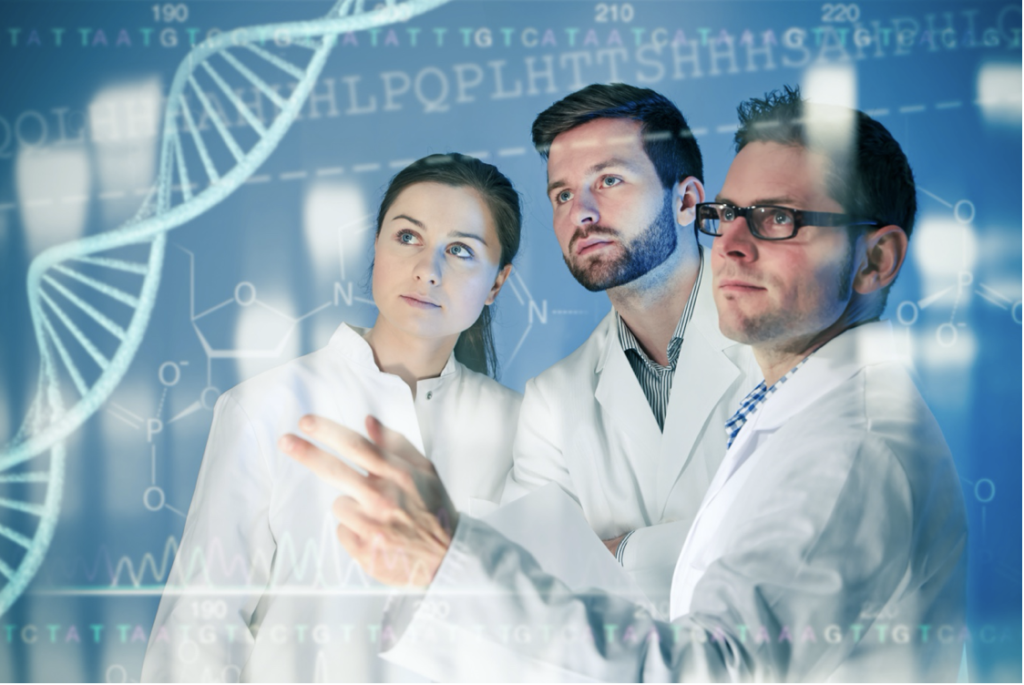 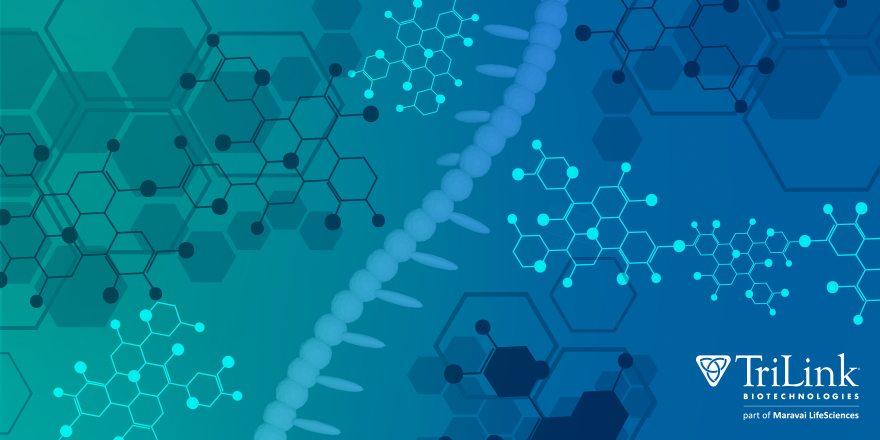