Dietary Intake of Plant miRNA in Humans is Exciting but Controversial 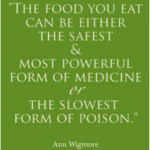 You’re probably familiar with the adage “you are what you eat,” the origins of which I found attributable to 17th century Europeans. As scientists, we can intuitively understand this concept by thinking about our dietary food as biochemical inputs, and our body content as biochemical outputs. Further intuition suggests that this input/output cuts both ways, so to speak, as stated here by noted healthy food advocate, Ann Wigmore.

Having said this, today’s blog comments on an aspect of diet that was completely unknown to anyone until the relatively recent discovery of short (~22 nucleotide) RNA called microRNA (miRNA) that exist in all plants and animals, and function as regulators of gene expression. In a nutshell, there is growing controversy as to whether or not miRNA in food or drink (aka dietary miRNA) can be taken up by humans and thereby affect gene expression—for good or bad.

While deep-sequencing data has shown human mother’s milk to be rich in miRNAs that are transferred to—and functionally protect—infants who are breast feeding, cross-kingdom transfers such as plant-to-human or animal-to-human were unknown…until now. There are significant new health and safety ramifications for possible cross-kingdom miRNA transfer—if true—so it’s not surprising that the first publication of evidence for dietary miRNA has led to much scrutiny and controversy. 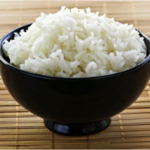 The possibility of human gene expression being influenced positively and/or negatively by dietary uptake of plant or animal miRNA was first reported in 2012 by Zhang et al. in Cell Research—a highly respected Nature journal. In this publication titled Exogenous plant MIR168a specifically targets mammalian LDLRAP1: evidence of cross-kingdom regulation by microRNA, a large team of Chinese authors characterized their results as “surprising,” although shocking may have been more appropriate—in my opinion. These investigators attributed the known ability of miRNA to be packed in microvesicles for extracellular trafficking as a mechanism by which plant MIR168a—abundant in rice—could be found in blood of Chinese subjects. 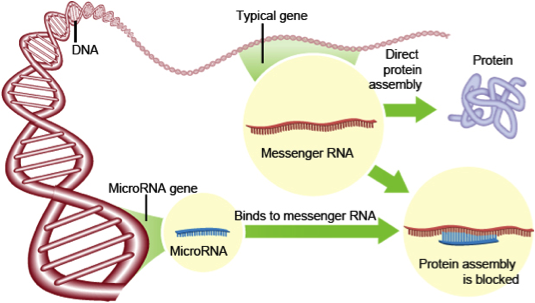 I checked and found that Chinese eat an average of 0.7 pounds of rice per day per person, which is a lot of rice every year. This high level of consumption, and the fact that rice is rich in MIR168a, is why Zhang et al. chose to investigate MIR168a transfer from rice to humans. If they could prove this transfer, there would be the possibility for this dietary “foreign” plant miRNA to cause an adverse effect by blocking expression of a human protein encoded by an mRNA sequence partially complementary to, and binding with MIR168a, as depicted below for the generalized case.

Having said this, Zhang et al. not only detected MIR168a in blood of Chinese subjects, but also investigated consequences thereof. Functional studies in vitro and in vivo demonstrated that MIR168a could bind to the human/mouse low-density lipoprotein receptor adapter protein 1 (LDLRAP1) mRNA, inhibit LDLRAP1 expression in liver, and consequently decrease LDL removal from mouse plasma. It was concluded that “[t>

hese findings demonstrate that exogenous plant miRNAs in food can regulate the expression of target genes in mammals.”

Wow! Shocking, indeed. But wait, there’s more to this story. 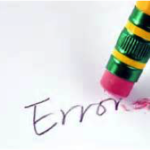 Given the aforementioned “surprising” findings by Zhang et al., it’s not surprising—pun intended—that there has been much scientific skepticism about those results, which may have increased somewhat after Cell Research published a corrigendum by Zhang et al. regarding incorrect Western blot images and legend for Figure 5. The authors apologized for these mistakes, and stated “[t>

his correction of Figure 5 and its legend does not affect the description of the results in the paper or the conclusions of our paper.”

Some will be wondering what else is wrong with this work, and maybe even think the study is bogus, so read on.

Scientists—including myself—are generally very skeptical about completely surprising or astounding results, or data that seems “too good to be true.” We all strive for “bullet proof” data and conclusions. Consequently, it was almost expected that some other investigators were intrigued enough to try to replicate the results of Zhang et al. Following is what these other investigators found…or should I say didn’t find.

BTW, if you’re asking yourself what’s a corrigendum, the Latin word corrigere meaning to ‘bring into order’ morphed in the 19th century into corrigendum that continues to be used by some science journals as a fancy word for correcting an error. Cynics would say corrigendum is a whitewash word.

Reinvestigation of Zhang et al. involved a collaboration between miRagen Therapeutics, which develops synthetic miRNA as drugs, and Monsanto Company, which has plant-related businesses. Their joint interest in doing so was stated in their (unfortunately pay-to-read) Nature Biotechnology publication as follows:

“The observation [by Zhang et al.>

provided a potentially groundbreaking new possibility that RNA-based therapies could be delivered to mammals through oral administration and at the same time opened a discussion on the evolutionary impact of environmental dietary nucleic acid effects across broad phylogenies.”

Sequencing miRNA libraries prepared from feed and animal samples was used as a very sensitive analytical tool. These and other measurements failed to detect oral bioavailability of plant microRNAs after feeding in mice, thus failing to reproduce the salient findings of Zhang et al. There was no evidence for uptake of plant miRNA168a in the plasma and liver of mice fed a rice diet.

An accompanying Editorial notes that Cell Research refused to publish these negative results telling the miRagen-Monsanto authors ‘it is a bit hard to publish a paper of which the results are largely negative,’ which is a lame—if not dubious—argument, in my humble opinion. More importantly, the Editorial goes on to say that Nature Biotechnology decided to publish these negative results because of the highly unexpected nature—and food safety ramifications—of the report by Zhang et al. Hip! hip! hooray! for Nature Biotechnology.

More recently, Spanish investigators published negative results for their attempts to find evidence for cross-kingdom transfer of miRNA, in this case for plant microRNAs in beer and extra virgin olive oil (EVOO) in human plasma after an acute ingestion of EVOO. Their hypothesis was that microRNAs present in beer and EVOO raw material could survive manufacturing processes, be part of these liquid products, be absorbed by human gut and circulate in human plasma. They said their motive for this study was that Spaniards consume large amounts of beer and EVOO.

Notwithstanding the seemingly dim prospects of finding dietary plant miRNA in humans that might have physiological relevance, based on the miRagen-Monsanto and Spanish findings, a team of investigators at City of Hope Beckman Research Institute and Medical Center has very recently published in Cell Research compelling results to the contrary. Moreover, these new results suggest potential anticancer effects of miRNA in food! 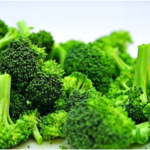 In a nutshell, Chin et al. used miRNA sequencing to look for plant miRNA in blood of healthy volunteers and breast cancer patients. They found MIR159 was the most abundant, and was present in microvesicles, which were mentioned above. They profiled the abundance of MIR159 in several commonly consumed plants and found that broccoli was particularly rich in MIR159. Furthermore, the majority of miR159 was still present after cooking, suggesting that it could be taken up from both raw and cooked foods.

The most remarkable finding—if not amazing, to me—was demonstration that the amounts of MIR159 in blood from healthy volunteers was sufficient to have an anticancer effect on breast cancer cells in culture. Moreover, oral administration of a synthetic MIR159 mimic exhibited anticancer effects in a mouse model of human breast cancer. They also reported details to support a molecular biological mechanism to explain this anticancer effect, and concluded with the following statement:

“These results demonstrate for the first time that a plant miRNA can inhibit cancer growth in mammals.”

Wow! Amazing! This almost sounds too good to be true, but hopefully additional studies—including those by sceptics—will confirm that it’s all true and it’s all good. So, have an extra helping of broccoli because it may have anticancer effects. Regular readers of my blogs will recall a post on a chemical in broccoli that was found to be effective for treatment of autism, both findings supporting its status as a superfood.