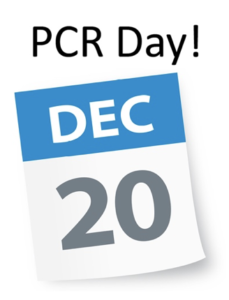 The idea of choosing a day to celebrate the polymerase chain reaction (PCR) traces back to DNA Day, which is celebrated on April 25th each year. DNA Day commemorates the publication of the double helix structure of DNA by Watson & Crick in Nature in 1953. As chronicled in Wikipedia, DNA Day was first celebrated on April 25th, 2003 in the United States by a proclamation of Congress as a one-time event, but it soon became an international yearly phenomenon. Past blogs about DNA Day in the Zone can be accessed at this link. 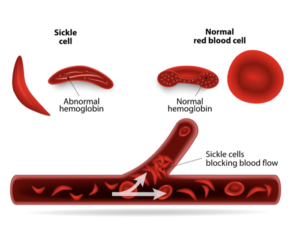 Appreciation for DNA as the molecular basis or “blueprint” of genetics evolved largely due to the co-evolution of various methods for the manipulation and analysis of DNA at the single-nucleotide level, for entire genomes. Among these DNA-based methods, PCR has arguably been the most enabling. First reported by Saiki et al. in Science on December 20th, 1985, PCR was discussed in an article titled Enzymatic amplification of beta-globin genomic sequences and restriction site analysis for diagnosis of sickle cell anemia.

Since the Saiki et al. publication in 1985, which has been cited more than 11,300 times, PCR continues to be increasingly used for a wide variety of diverse applications, as indicated by this chart of ~500,000 publications indexed to the phrase “polymerase chain reaction” in PubMed. In addition, the same phrase is found in text searches of ~86,000 patents in the United States Patent and Trademark Office database, as well as in ~2,870,000 items in Google Scholar. 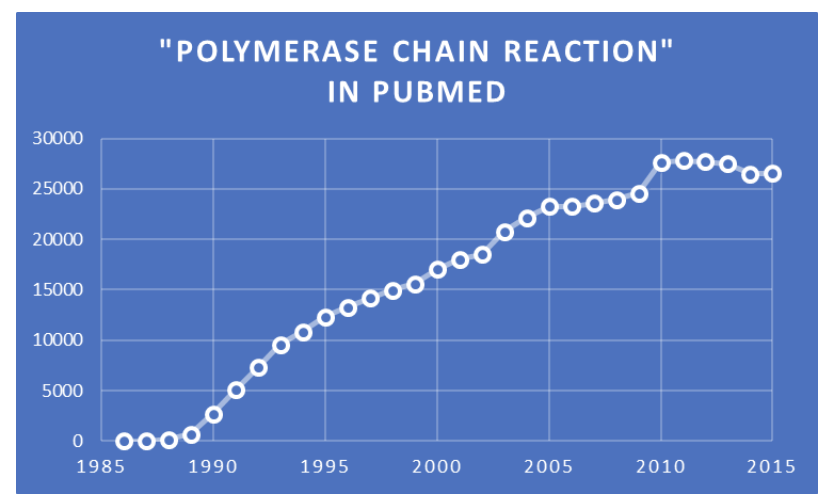 While the Saiki et al. publication date of December 20th will likely be officially recognized by some organization someday in the future, the Zone proposes that recognition is deserved now. This inaugural blog for PCR Day will briefly revisit the invention of PCR as a historical starting point, and then fast-forward, focusing on some examples of single-molecule amplification—the frontrunner in sensitivity—enabled by the 2n-amplification power of PCR.

The Inventor and Invention of PCR 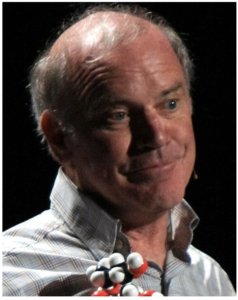 Although the December 20th, 1985 report in Science by Sakai et al. was the first public disclosure of PCR, it tells nothing about the “who and how” of PCR discovery. These elements are best revealed by the inventor of PCR, Kary B. Mullis. His personal account titled The Unusual Origin of the Polymerase Chain Reaction, which was published in Scientific American in April 1990, is a “must read” for anyone who uses PCR. Some of the “unusual” aspects will be described below.

In 1983 at Cetus Corporation, Mullis was—in his words—“puttering around with oligonucleotides” in search of “a technique for easily determining the identity of the nucleotide at a given position in a DNA molecule.” The approach he was thinking about was essentially a variation of what nowadays is called polymerase-mediated single-base extension of an oligonucleotide primer using dideoxynucleotide triphosphate (ddNTP) terminators to identify single-nucleotide polymorphisms (SNPs) or mutations. 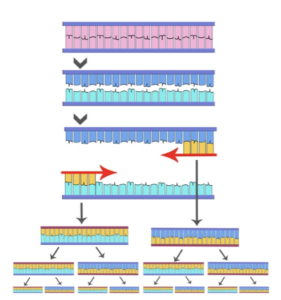 While thinking about potential problems due to trace contamination of ddNTPs with regular deoxynucleotide triphosphates (dNTPs), he suddenly recognized the essential elements of PCR. As depicted here, a pair of oppositely oriented oligonucleotides with any desired spacing and thermal cycling could repeatedly melt and hybridize for extension by a polymerase and dNTPs, which would then lead to exponential amplification of any selected segment of DNA. Such an amplification method, he thought, seemed to be more useful than the original technique he was pursuing.

But the story gets even more interesting. Mullis says that “[f>

no one was particularly enthusiastic about it.” Undeterred, he did an initial experiment and got the expected gel result late that evening, when he bumped into Albert Halluin, the patent attorney for Cetus. Mullis told him about the idea of PCR and the results. Halluin “agreed that it was significant…[and>

was even a little excited and suggested that I get to work on the experiment and write a patent disclosure.”

That first United States patent for PCR can be accessed at this link, and in retrospect, Halluin’s word “significant” understates the eventual scientific value of PCR, for which Mullis was awarded the Nobel Prize in Chemistry in 1993. Sadly, Mullis died on August 7, 2019 from heart and respiratory failure in his home, according to an obituary in the Los Angeles Times. He was 74. A short video interview of Kary Mullis in 2007 describing his invention of PCR is available at this link.

Numerical Perspective for a Single Molecule 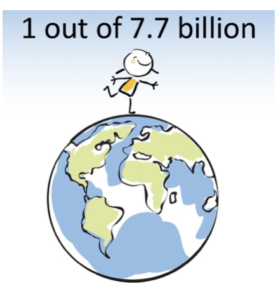 Chemists, including me, typically work with molecules on the mole (mol) to millimole (mmol) scales. A mol is ~6 x 1023 molecules, and a mmol is ~6 x 1020 molecules. Both are almost incomprehensively large numbers. Biochemists and molecular biologists typically work on micromole (umol) to picomole (pmol) scales, respectively ~6 x 1017 to ~6 x 1011 molecules, which are both still very large numbers. To put these exponential numbers in perspective, let’s start with the fact that 1012 is one trillion, which is one-thousand billions. Therefore, amplifying a single molecule to one trillion is conceptually equivalent to “amplifying” a single person to generate earth’s entire current population of 7.7 billion people, and then repeating that amplification about one hundred times!

I am sure you get the point by now: working with only one molecule is exceedingly difficult. Common analytical methods for nucleic acids, such as gel electrophoresis and UV-visible spectroscopy, are generally applicable for umol to pmol quantities of analytes, and working with one molecule would not be possible for most scientists if it were not for PCR amplification.

The first report on single-molecule amplification by PCR was published in 1998 by Ohuchi et al., in a paper titled In vitro method for the generation of protein libraries using PCR amplification of a single DNA molecule and coupled transcription/translation. In this publication, the researchers coined the term ‘single-molecule PCR’ (smPCR). Single molecules of DNA template were obtained by serial dilution, and randomized three-base tags were incorporated into one of the primers for sequence-based evidence to address the question they posed: “Could a single molecule of DNA really be amplified?”

Data obtained by Ohuchi et al. indicated that the answer was yes; however, problems with non-specific amplification had to be addressed, and still are problematic for PCR despite its widespread usage. Unwanted primer dimers and mis-priming products, investigated early on at Cetus, are commonly formed under low stringency hybridization conditions that exist prior to PCR during sample preparation at ambient temperature, and during the initial heat-denaturing ramp of the PCR process. Once formed, these off-target products can compete with amplification of the desired DNA target and significantly decrease the efficiency of the method.

Over the years, various approaches have been investigated to mitigate these problems, as discussed by Koukhareva and Lebedev in a publication that describes the development of TriLink’s novel heat-reversible 3′-protected derivatives of dNTPs, depicted here, as substitutes for natural dNTPs in PCR. Since 3′-protected dNTPs are either non-substrates or terminating substrates for thermally stable DNA polymerases, such as Taq, they do not support primer

Taken from a TriLink CleanAmp® poster, which can be consulted for technical details.

extension/elongation at low stringency conditions during PCR sample preparation, when PCR artifacts such as primer dimers and mis-priming products can form. After hot-start cycling, PCR proceeds with much improved specificity, especially in highly multiplexed PCR reactions. These modified dNTPs and various kits containing them are available from TriLink as CleanAmp® Hot Start PCR products.

Digital PCR (dPCR) has revolutionized the way in which PCR is used for quantification. PCR carries out one reaction per single sample. dPCR also does this, but the single sample is separated into a large number of partitions, and the reaction is carried out in each partition individually, as depicted here. This separation allows for a more reliable collection and sensitive measurement of nucleic acid amounts.

dPCR also has a greater tolerance for inhibitor substances and PCR assays that amplify more inefficiently, when compared to qPCR. For example, dPCR can quantify specific sequences from contaminated genetically modified organisms (GMOs) in food, viral loads in the blood, biomarkers of neurodegenerative disease in cerebral spinal fluid, and even fecal contamination of drinking water.

The treatment of DNA with bisulfite, which converts C to U but leaves 5-methyl-C unchanged, forms the basis of many analytical techniques for DNA methylation analysis. Many techniques exist for measuring the methylation state of a single CpG, but for analysis of an entire region, cloning and sequencing has been the gold standard. However, biases in PCR amplification and in cloning can skew the results.

Next-Generation DNA Sequencing Methods by Elaine R. Mardis, a well-known sequencing expert, provides an excellent review of various highly multiplexed sequencing approaches that have come to be collectively known as next-generation sequencing (NGS). Several of these methods employ single-molecule PCR, either in emulsion or on a surface, as exemplified here for the widely used Illumina systems. According to Mardis, the single-molecule amplification step for the Illumina Genome Analyzer starts with an Illumina-specific adapter library (blue), and takes place on the oligo primer-derivatized surface of a flow cell, as depicted here (green and red primers). 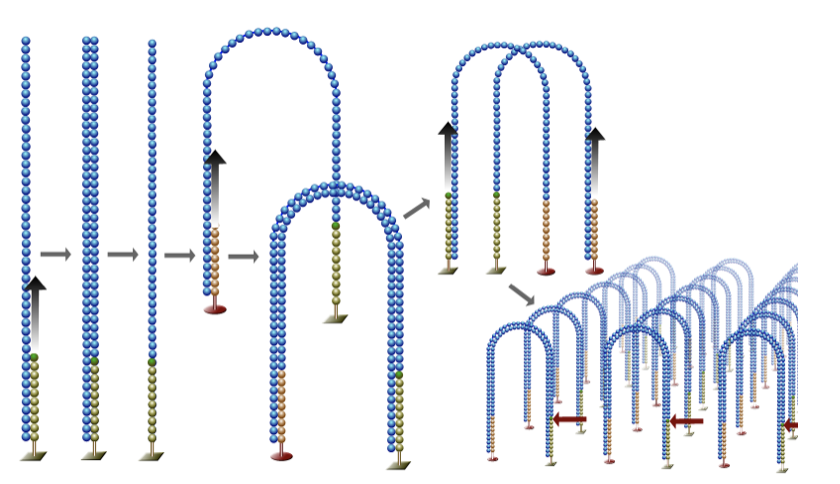 Bridge amplification. Taken from commons.wikimedia.org and free to use.

The overall process, called bridge amplification, is performed by an automated flow-cell device called a Cluster Station, as the PCR-like amplification leads to “clusters” of clonally pure DNA, depicted as tiny spots to be sequenced. Put another way, the DNA polymerase produces multiple DNA copies, or clusters, that each represent the single molecule that initiated the cluster amplification. A separate sample library can be added to each of the eight channels that comprise the device, and the same library can be used in all eight, or combinations thereof.

Each cluster contains approximately one million copies of the original fragment, which is sufficient for reporting incorporated bases at the required signal intensity for detection during sequencing, says Mardis. The Illumina system utilizes a sequencing-by-synthesis approach in which all four nucleotides are added simultaneously to the flow-cell channels, along with DNA polymerase, for incorporation into the oligo-primed cluster fragments. 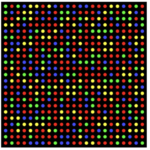 Taken from commons.wikipedia.org and free to use.

Specifically, the color-coded nucleotides carry a base-unique fluorescent label, and the 3’-OH group is chemically blocked, making each incorporation is a unique event. An imaging step follows each base incorporation step, during which each flow cell lane is imaged by the instrument optics, as depicted here. After each imaging step, the 3’-blocking group is chemically removed to prepare each strand for the next incorporation by DNA polymerase. This series of steps continues for a specific number of cycles, as determined by user-defined instrument settings. In this manner, read lengths of 150—300 bases are achieved. 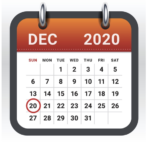 If you take into account the huge number of PCR-related publications and other items mentioned in the introduction, we have discussed a necessarily exceedingly small sampling of what has been enabled by PCR since its discovery by Kary Mullis in 1983, and the first publication describing it on December 20th, 1985. Next December, in 2020, the Zone intends to celebrate PCR Day—December 20th once again, by featuring additional applications enabled by this amazingly powerful amplification method. So, mark your calendars now, and stay tuned!

In the meantime, your comments are welcomed, as usual. 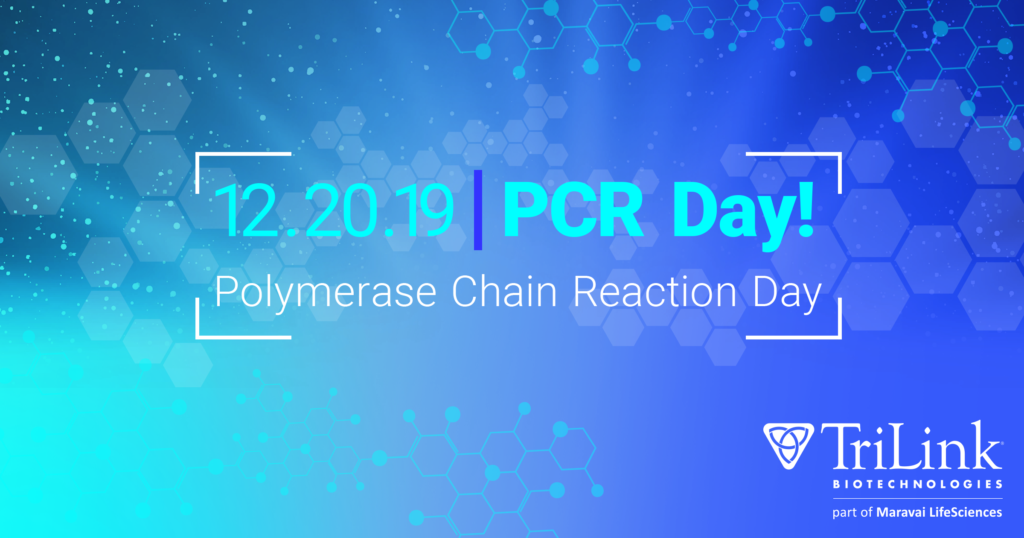