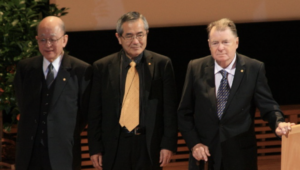 Nobel Laureates (from left) Suzuki, Negishi, and Heck (2010). Credit: BloodIce. Taken from en.wikipedia.org and free to use.

Before describing how transcribed RNA can now be labeled by using SMCC, I think it is important to mention the history of this synthetic organic name-reaction for readers who are not familiar with it. In general, the coupling partners in a palladium (Pd)-catalyzed SMCC are derived from an organohalide, R-X, and an organoboronic acid ester, R’-B(OR”)2, yielding R-R’ as the product. The origin of SMCC goes back 50 years, to a 1979 publication by Norio Miyaura, an associate of senior author Prof. Akira at the time. In 1994, Miyaura and Suzuki comprehensively reviewed the early development of this now famous methodology. Prof. Suzuki shared the 2010 Nobel Prize in Chemistry with Profs. Richard F. Heck and Ei-ichi Negishi, all pictured here, for independently pioneering palladium-catalyzed cross-coupling reactions in organic synthesis.

he impact of [SMCC>

on academic and industrial research, as well as on production, has been immense. Over the past two decades, it has become arguably one of the most efficient methods for the construction of biaryl or substituted aromatic moieties; compounds that contain these substructures constitute important building blocks of polymers, ligands, a wide range of natural products such as alkaloids, as well as in numerous biologically active pharmaceuticals.” There has been increasing interest in SMCC, as can be seen from the results depicted here of my search in Google Scholar, which indicate nearly 10,000 publications, patents, or citations during 2014-2018. 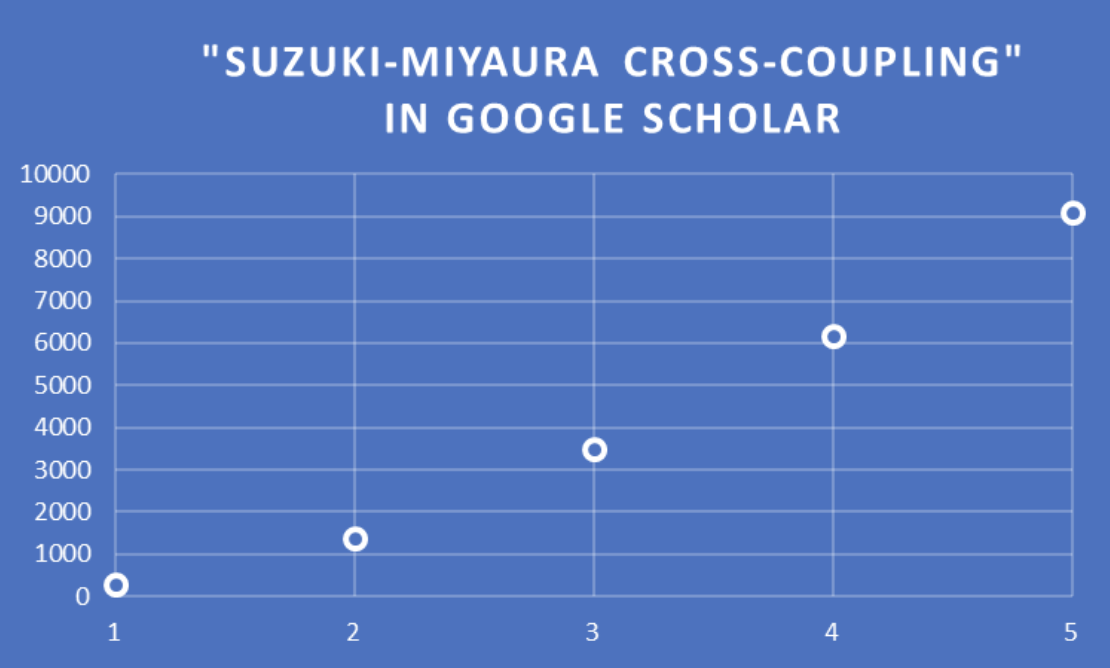 Fast-Forward 50 Years of SMCC to RNA

Despite the fact that it’s been 50 years since its origin, the applicability of SMCC for Pd-mediated C-C bond formation in polynucleotides has emerged only recently, due to the development of new Pd-ligand catalytic systems, which accelerate the coupling reaction in aqueous buffer. In 2011, Manderville and coworkers first reported the utility of SMCC in the post-synthetic functionalization of DNA oligonucleotides. Specifically, oligodeoxynucleotides (ODNs) containing 8-bromoguanosine were reacted with arylboronic acids in the presence of a catalytic system made of Pd(OAc)2 and a water-soluble triphenylphosphine-3,3’,3”-trisulfonate ligand, which had been previously used by others for nucleotide modifications. However, this catalytic system requires elevated temperatures (>70◦C), long reaction times, and alkaline conditions in order to generate coupled ODN products in moderate yields.

In 2013, Davis and coworkers published the use of a combination of Pd(OAc)2 and 2-aminopyrimidine-4,6-diol (ADHP) or dimethylamino-substituted ADHP (DMADHP) to obtain a milder route for directly coupling functional labels to ODNs by using SMCC. However, extension to RNA has been quite limited by the inherently lower stability of RNA, according to Walunj et al., who decided to take on the challenge of solving this problem. As depicted here, these investigators succeeded in developing a relatively mild (37◦C, pH 8.5) and efficient method to modify RNA by first incorporating a halogenated nucleotide analog into RNA by a transcription reaction, and then a post-transcriptional SMCC in the presence of a cognate reactive partner labeled with a desired biophysical reporter or tag.

Incorporation of 5-Iodouridine by In Vitro Transcription Reactions

In order to set up an RNA functionalization method by SMCC, Walunj et al. chose to incorporate 5-iodouridine 5-triphosphate (IUTP) into RNA transcripts by in vitro transcription reactions. Although these investigators synthesized IUTP, it is worthwhile to note that IUTP is available from TriLink BioTechnologies as a catalog item, and that solid-phase synthesis of 5-iodouridine (IU)-modified RNA is possible using an IU-modified phosphoramidite reagent that is a catalog item from Glen Research.

The in vitro transcription reactions studied by Walunj et al. used chemically synthesized DNA templates as relatively simple models that contained either one or two (adjacent or spaced) adenine bases to code for bacteriophage T7 polymerase-mediated incorporation of IU. Efficiency of incorporation was measured by gel analysis of 32P end-labeled transcripts. Reactions performed with either IUTP or UTP gave comparable amounts of transcript in excellent yield (98%). Interestingly, in a reaction containing a 1:1 molar ratio of UTP and IUTP, the RNA polymerase incorporated IUTP somewhat more preferentially than UTP.

The IU-containing RNA oligonucleotide transcript with the sequence 5’-pppGCGCCG(IU)GCA-3’, which was referred to as compound 4, was used as a relatively simple model compound for investigating the optimization of the reactions conditions for SMCC with vinylogous boronic acid esters 9 and 10, shown here as the initial label-donor reactants.

RNA 4 was subjected to SMCC using various stoichiometries of the substrate and reagents so as to achieve good conversion with minimum degradation of the coupled product. Walunj et al. preferred to use a combination of Pd(OAc)2 and ADHP or DMADHP (abbreviated L1 and L2, respectively, and depicted here), as these systems had been shown by Davis and coworkers (see above) to be efficient in the Pd-mediated functionalization of DNA. Coupling reactions were performed by incubating 4 (1 equivalent) with Pd(OAc)2 (L1)2 (1 equivalent) and nitrobenzofurazan (NBD)-labeled boronic ester 9 or 10 (100 equivalents) in Tris-HCl buffer (50 mM, pH 8.5) at 37◦C. Aliquots of reaction mixtures after 3, 6, and 9 h were resolved by analytical gel electrophoresis under denaturing conditions, and products 9a or 10a were analyzed by UV-shadowing.

Reaction with NBD dye 10, which is attached to the boronic ester moiety via a longer linker, showed almost complete consumption of the substrate in 6 h as compared to 9, which remained partially consumed after 9 h. When the amount of boronic ester 10 was reduced to 50 equivalents, the reaction required a slightly higher loading of Pd-L1 (2 equivalents) to achieve the coupling in 6. Under these conditions, there was no detectable degradation of the RNA product.

Based on these preliminary results, transcript 4 was subjected to post-transcriptional coupling reactions with 50 equivalents of boronic esters 9-11 (see above) using 2 equivalents of Pd-L1/L2. Reactions were monitored by HPLC, and the peak corresponding to the product in each case was isolated and characterized by mass spectrometry. In the presence of L1, reaction with NBD-boronic ester 9, which contains a short linker, gave 28% of the fluorescent RNA product 9a in 12 h. However, reaction with NBD-boronic ester 10, containing a longer linker, afforded 30% of the fluorescent RNA product 10a within 6 h. Under similar conditions, biotin-coupled RNA product 11a (see above) was isolated in 28% yield from a reaction with biotinylated boronic ester substrate 11.

No attempts were made to obtain higher yields of these products by using longer reaction times, because HPLC chromatograms of reactions with substrates 9−11 revealed the formation of significant amounts of de-iodinated transcript, along with unreacted transcript 4. De-iodination is a known side-reaction in SMCC, the mechanism of which has been recently elucidated. Reactions using the Pd-L2 system for these substrates were found to be less efficient when compared to the Pd-L1 combination. 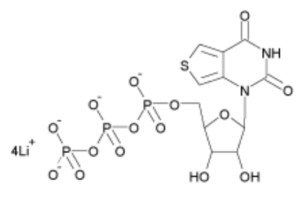 There is considerable interest in labeling nucleic acids with moieties that respond to structural changes and/or molecular environments, i.e. “environmentally responsive” probes. These probes include responsive fluorescent nucleoside analogs assembled by conjugating heterocyclic rings with nucleobases, such as thieno ring-fusion with pyrimidines and purines pioneered by Prof. Yitzhak Tor. One such nucleotide is depicted here, and is available with other congeners as a catalog nucleotide from TriLink BioTechnologies for direct incorporation into RNA by transcription.

Reactions with these substrates gave fluorescent RNAs 12a-15a labeled with furan-, benzothiophene- and benzofuran-modified uridine, as shown here. These analogs have been successfully used in assays to probe nucleic acid structure, generation of lesions, and sequence recognition, as well as for setting up screening platforms, according to Walunj et al. (references cited therein). 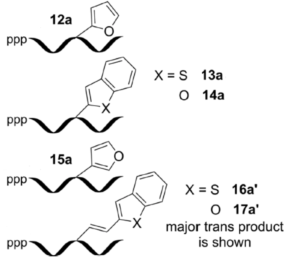 Walunj et al. next sought to use this labeling approach to introduce new fluorescent nucleoside modifications into RNA. They envisioned that coupling heterocycles onto nucleosides via an extended π system may impart interesting photophysical features to otherwise non-emissive nucleosides. To explore this, readily synthesizable heteroarylvinyl boronic esters 16 and 17 (see above) were reacted with IU-labeled RNA 4, and were found to undergo facile SMCC and produce RNAs containing 5-(benzothiophen-2-yl)vinyl uridine and 5-(benzofuran-2-yl)vinyl uridine, respectively, in good yields. HPLC chromatograms revealed the presence of major (designated as 16a’ and 17a’) and minor (designated as 16a” and 17a”) peaks, with the same mass. These were assigned to trans (shown here) and cis isomers, respectively, based on additional evidence in the paper by Walunj et al.

Towards the end of their paper, Walunj et al. described some initial spectroscopic studies aimed at demonstrating the utility of labeled RNA obtained by SMCC. Interested readers can consult Walunj et al. for details, as only one example will be briefly mentioned here. Namely, labeled RNA 17a’ was hybridized with synthetic ODNs, such that the emissive benzofuranyl moiety in 17a’ would be paired opposite to complementary or mismatched bases. Typical of a responsive nucleoside probe, the emission maximum and intensity of the nucleoside were found to be sensitive to neighboring base environment. The benzofuranyl moiety incorporated into single stranded RNA and then into duplexes (matched or mismatched) showed a progressing increase in fluorescence intensity as compared to the free nucleoside analog. 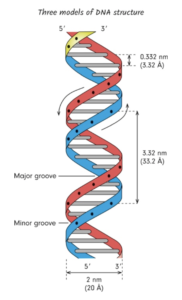 The enhancement in fluorescence and blue-shifted emission indicate, according to Walunj et al., that “the micro-polarity around the emissive analog in the duplex is significantly lower than water. A comparison of emission maximum of the free nucleoside analog in different solvents and in [the duplex>

suggest that the modification at the 5-position of uridine, which is projected in the major groove, experiences a polarity closer to methanol.” This result was said to be consistent with the major groove polarity of the duplexes reported in the literature. Furthermore, among several duplexes studied, the emissive analog placed in the vicinity of guanine showed lower fluorescence intensity when compared to other bases, which is likely due to the known quenching effect of guanine by an electron transfer process. 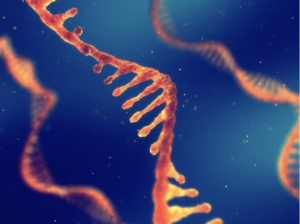 Walunj et al. ended their discussion of the aforementioned results by saying that “[t>

aken together, these results underscore the potential of post-synthetic Suzuki coupling reaction in directly accessing RNA ONs labeled with fluorogenic and environment-sensitive nucleosides.” In my opinion, the potential for these applications still faces several challenges, including the fact that they may be limited by the current need to use a relatively large excess (i.e. 50 equivalents) of label-donor, which may be cost prohibitive. Another issue is the length of RNA to be labeled, since the probability of hydrolytic internucleotide chain-cleavage increases with length and will therefore reduce the yield of product. There is also the question of how to incorporate and label IU bases at multiple sites.

In order to not end on an overly pessimistic note, I found that even more efficient Pd-catalyst systems for very mild cross-coupling reactions under aqueous conditions have been reported, and may help in dealing with some of the issues regarding the labeling of long RNA. 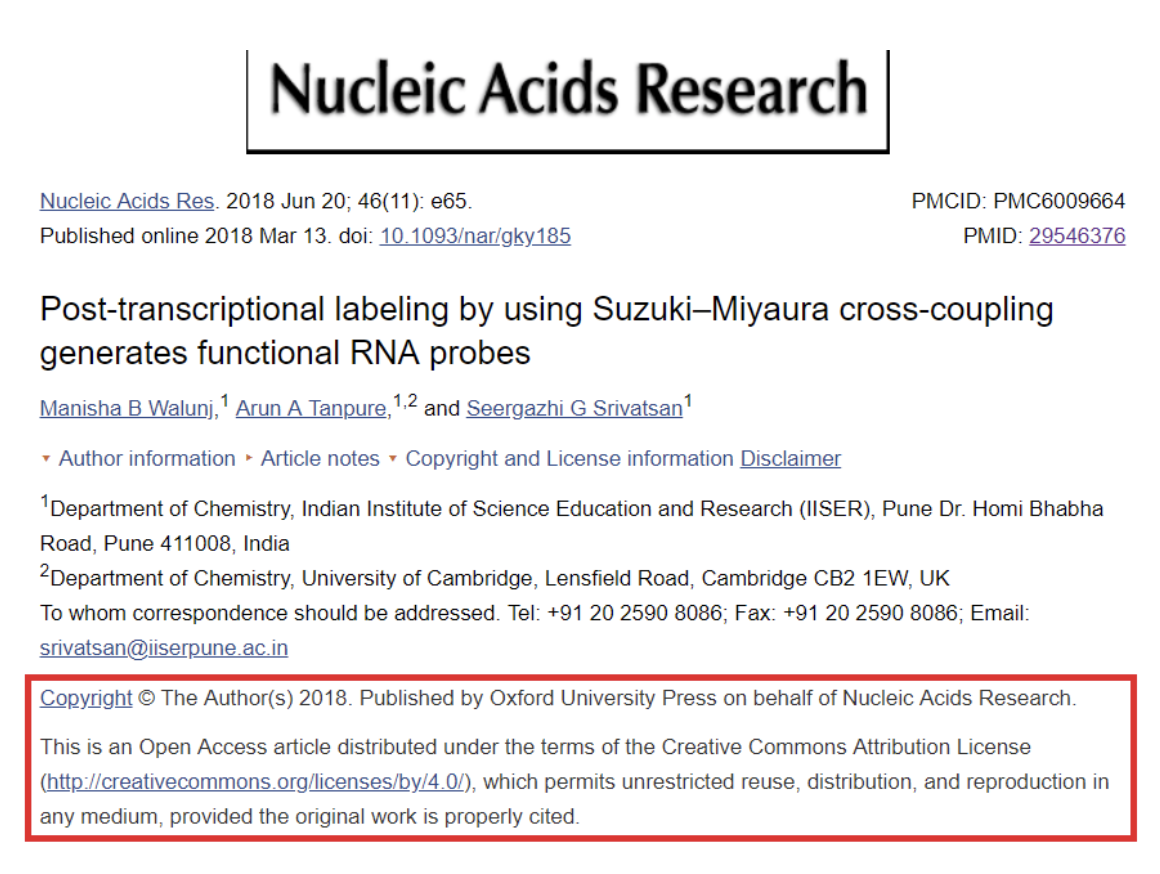 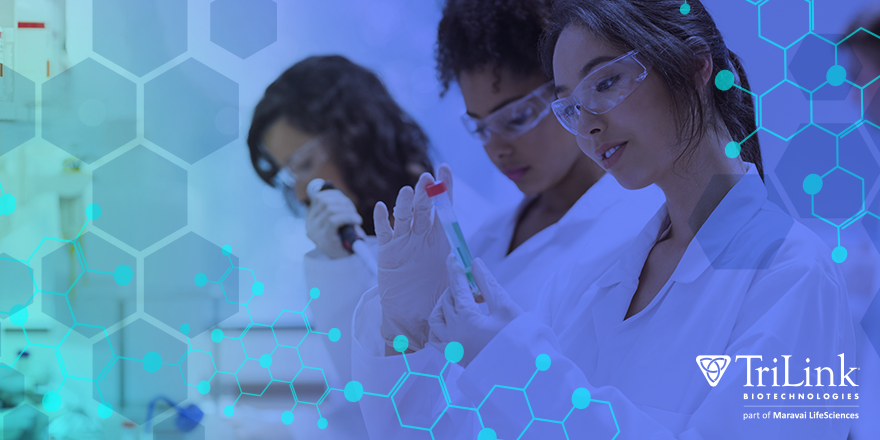