RNA and DNA Examples of ‘Seek, and Ye Shall Find’

‘Seek, and ye shall find’ is a biblical quote (Matthew 7:7) that many might say is a self-evident statement indicating that to find something you need to look for it. In any case, I used it as a segue for us scientists to remember that our collective understanding of RNA and DNA is limited, in part, by the analytical tools we use for these nucleic acid molecules. To me this predicament is akin to a person under the lamp post at night being limited to find whatever is illuminated, and miss what is not. The old cartoon below conveys a humorous variant of this. But I digress...

In previous postings here, I’ve commented on new illuminations—pun intended—for RNA modifications, such as pseudouridine, about which understanding of function is just emerging. And likewise for congeners of the 5-methyl group of cytidine in DNA, such as 5-hydroxymethyl or 5’-formyl moieties.

To continue this metaphor—but to get to the point—the lamp post’s light-field has been recently expanded to allow researchers to now find previously unseen modified bases in mammalian RNA and DNA, namely, N1-methyladenosine and N6-methyl-2’-deoxyadenosine, respectively. Briefly, here’s what’s been reported.

Just like modification of bases in DNA after its replication leads to what’s called epigenetics—which I’ll get to in the next section—modification of bases in RNA after its transcription leads to epitranscriptomics. This somewhat of a tongue-twister term was first introduced in 2013 by Sibbritt et al. in reference to increasing amounts of data for methylated bases in mRNA in the form of N6-methyladenosine (m6A) and 5-methylcytosine (m5C).

Both m6A and m5C have long been known to exist in both prokaryotic and eukaryotic organisms, but only more recently have a flurry of publications shed light—pun intended—on the precise locations, as well as enzymatic introduction and removal of m6A and m5C. This dynamic “writing” and “erasing” has been expertly reviewed by He and coworkers, who have also contributed to these discoveries. 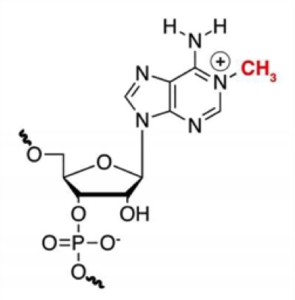 He and collaborators at the University of Chicago, together with researchers in Israel, have recently reported in venerable Nature magazine a new mRNA modification, namely N1-methyladenosine (m1A), which occurs on thousands of different gene transcripts in eukaryotic cells spanning genetically simple yeast to much more complex mammals.

Taking advantage of newly developed sequencing approaches—i.e. brighter lamp posts in my metaphor—they showed that m1A is enriched around the start codon upstream of the first splice site. More specifically, they observed that m1A “preferentially decorates more structured regions around canonical and alternative translation initiation sites, is dynamic in response to physiological conditions, and correlates positively with protein production.”

They conclude by noting that “these unique features are highly conserved in mouse and human cells, strongly indicating a functional role for m1A in promoting translation of methylated mRNA.” So, as I said at the beginning of this blog, seek and ye shall find, and He did—capital H and pun intended.

Incidentally, those of you who are chemists will recognize that the ionic structure for m1A pictured above can undergo deprotonation to form a formally neutral counterpart having an H-N=C-N-CH3 moiety, as shown in TriLink’s catalog for the triphosphate derivative of m1A. Which one, or the proportion of these two structures for m1A exists in an mRNA of interest will depend on sequence context, local pH, etc. In this regard, scientists will need to somehow seek, in order to find, those answers in epitranscriptomics.

Until recently, mammalian epigenetics had been solely focused on 5-methyl-2’-deoxycytidine and sequentially oxidized versions thereof, i.e. having hydroxyl, formyl, and carboxyl moieties, all of which are offered by TriLink as various products as either 5’-triphosphates or oligonucleotides. In less complex, prokaryotic organisms such as bacteria, N6-methyl-2’-deoxyadenosine (m6dA) is prevalent, but whether it is found in mammals has remained unclear until now.

A multi-university collaboration with the single-molecule-sequencing company Pacific Biosciences now report (Wu et al. 2016) the existence of m6dA in mouse stem cells. This landmark discovery was even more exciting because of the identification of an enzyme that removes methyl groups from m6dA, and by finding that m6dA is enriched in certain regulatory DNA sequences. Together these data provide clues to the possible function of m6dA in mammalian genomes.

Akin to my introductory light-from-the-lamp-post metaphor, detection and location of m6dA was enabled by more powerful analytical methods compared to those available in the past. Using state-of-the-art liquid chromatography-tandem mass spectrometry (LC-MS/MS), Wu et al. found that m6dA represented only 6–7 bases per million (!) adenines genome-wide. m6dA was enriched ~4-fold in genomic regions associated with a rare histone protein, H2AX, although the reasons for this association remain unclear.

The authors next determined specific locations of m6dA in sequences of DNA bound to H2AX by using Pacific Biosystems single-molecule real-time (SMRT) sequencing, which detects different kinetics with which a polymerase enzyme replicates modified bases compared with standard ones. Readers interested in this clever—dare I say “SMaRT”—method can check out my previous blog on SMRT.

In my opinion, the most challenging aspect of investigating epigenetics and epitranscriptomics is deciphering the dynamics and functional impact of “writing” and “erasing” methyl groups on bases in DNA and RNA, respectively. Erasure, i.e. removal of methyl groups is carried out by so-called demethylase enzymes. Several demethylases of the AlkB protein family have been shown to remove methyl groups from m6A in RNA as a means of regulating mRNA function. In mammals, this protein family has nine members, among which AlkBH1-deficiency was found by Wu et al. in mouse embryonic stem cells (ESCs) to lead to accumulation of m6dA in the genome, and that AlkBH1 could remove methyl groups from m6dA in DNA in vitro.

Intriguingly, Wu et al. further discovered that AlkBH1 worked most effectively on single-stranded DNA in vitro, thus raising the question of whether the enzyme preferentially operates during transcription or DNA replication in vivo, when DNA is transiently single stranded.

It’s also worth noting that enzymes that “write” (i.e. add) methyl groups to the N6-position of dA in mammalian DNA remain to be defined, as do the “reader” proteins that detect genomic m6dA.

In conclusion, I hope that this brief synopsis of new findings in “epi-marking” RNA and DNA has been illuminating—pun intended—with regard to molecular biology and the need for applying ever more powerful analytical methods to find more of what we are looking for: the molecular basis for living organisms.

On second thought, it seems to me that scientific discovery is perhaps more like moving forward from one lighted area to the next...

As usual, I welcome your comments.