RNA in DNA—Mistake or Mystery?

When I came across a publication on the presence of RNA in DNA my initial reaction, frankly, was great surprise, if not outright disbelief. As the so-called “blueprint” of life, I reckoned that DNA is virtually sacred in terms of its chemical composition, albeit subject to base mutations as well as insertions and deletions of sequence. In other words, I had heretofore been under the impression that DNA’s repeating units are 100% deoxyribonucleotide (and conversely that RNA’s are ribonucleotides), thus giving DNA (and RNA) the eponymous name is has. So, I thought to myself, if that’s reportedly not the case for DNA, what are the facts and implications, i.e., is RNA in DNA just a rare “mistake” or is this yet another example of a “mystery” of Nature. Below is what I’ve learned about this revelation.

Taken from www.mun.ca via Google Images

Faithful replication of the genome is essential for the propagation of cells, and multiple mechanisms have evolved to ensure the accurate copying of DNA during cell division. In general, replication fidelity refers to the preservation of base identity between genomic template (parent) and copied (daughter) strands of DNA. Replication enzymes (DNA polymerases) insert deoxyribonucleotides (dNTPs) at the 3′ end of the nascent strand that are complementary to the opposite base on the template strand: namely, complementarity of A-T and G-C base pairs. Proofreading activity of DNA polymerases as well as other, post-replicative enzymes act to recognize and repair mispaired dNMPs that are inserted during replication. In this way, there is multi-tiered protection against mutations, and the error rate of replication is kept extremely low.

Apart from ensuring complementarity, another facet of replication fidelity is the discrimination of the sugar backbone of the nucleic acid strand (ribose rNTPs versus deoxyribose dNTPs) so that the correct sugar NTP is chosen. As seen from the structure above, these two classes have very similar structures, differing by the added presence of only a single oxygen in ribo vs. deoxy forms. Hence, polymerases are challenged with distinguishing between the two types of nucleotides, otherwise they risk inserting the incorrect substrate into the newly replicated nucleic acid strand. Since RNA moieties in what should be 100% DNA would seemingly lead to various problems, I was surprised to learn that ribonucleotide misincorporation represents the most common type of replication error and occurs quite frequently in normal cells. Even more surprising, as you will now read, there are some positive consequences to having “some Rs among the Ds,” so to speak. 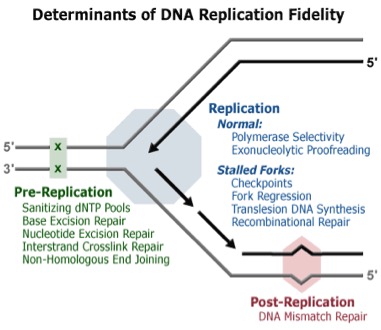 Frequency and Consequences of RNA in DNA

According to a recent review by Potenski & Klein, rates of ribonucleotide misincorporation are influenced by many factors: e.g. replicative polymerase, the rNTP in question, the surrounding sequence context and the ratios of rNTP to dNTP pools (which change, but typically involve ∼100-fold more rNTP than dNTP).

As such, sugar discrimination is a very important trait for DNA polymerases in this environment enriched for rNTPs over dNTPs. Studies of human Pol δ by Kunkel and coworkers found that in reactions containing nucleotide concentrations estimated to be present in mammalian cells, there was one rNTP incorporated per ∼2000 dNTPs—a result which predicts that human Pol δ may introduce >1,000,000 rNMPs into the genome per replication cycle.

They then offered the following examples of beneficial effects of rNMP into genomic DNA:

Having learned all of the above information that was completely new to me, the obvious next thoughts I had were questions of where in DNA were these RNA moieties, and were these locations random or grouped in ways suggesting function? Remarkably, and to this point, four completely independent studies of methods for mapping genomic ribonucleotides were contemporaneously published on January 26, 2015:

Although none of the methods have been compared head-to-head yet, all of the datasets are publicly available for interested researchers. Needless to say, these datasets are “dreams come true” for bioinformaticians, who will have many fun challenges writing algorithms to parse the data in attempts to conjure up possible functional rationale. Stay tuned on more insights into the “mystery” of Nature being revealed by yet another new application for deep sequencing, which I’ll call “ribonomics” or, more mundanely, “what’s the R in DNA for?”

As usual, your comments are welcomes.