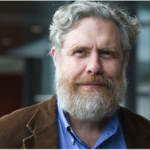 Devotees of my blog will know that I’m prone to word play such as calling myself a “huge” fan of “tiny” nanopores for DNA sequencing, about which I’ve previously opined. They will also recall that I’m an admitted scientific admirer of George Church, who I think is The Most Interesting Scientist in the World.

Having said this, it’s not surprising that I closely follow what’s trending in nanopore sequencing, and also make an attempt to read all of Church’s papers as they get published because they are almost invariably quite interesting, involve “big ideas,” and in some new way are very educational, at least for me. Following are my comments about a recently published paper on nanopore sequencing in venerable Proceedings of the National Academy of Sciences of the United States of America (aka PNAS) wherein Church is the designated corresponding author.

The seminal origins and early history of nanopore sequencing have been recently chronicled and criticized—then clarified—in Nature Biotech in several “To the Editor” items, which collectively provide enlightening insights into who did what when, so to speak. Those of us who are ‘Nanoporati’—a clever term tweeted by Nick Lowman—should definitely read those Nature Biotech items. For now, however, I’ll set the stage, as it were, by echoing a bit of what I’ve posted in the past for nanopores.

Patented but prophetic (i.e. no data) methods for nanopore sequencing DNA is actually a relatively old (~20 year) idea posited by Church and other creative visionaries. On the other hand, nanopore sequencing was first reduced to practice commercially not too long ago by Oxford Nanopore Technologies (ONT). Many years of delay between concept and commercialization was due to the need for gradual evolution of lots of “nanopore-ology” and sequencing biochemistry, as well as developing highly sophisticated electronics and complex algorithms for data analysis. 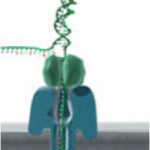 As depicted below, and as can be best seen in a video, ONT’s commercially available MinION Seq-by-Scan system essentially involves threading a strand of DNA through a protein-based nanopore and converting resultant ionic current fluctuations into nucleotide base sequence.

While there are issues with base-calling accuracy, the remarkably small and readily portable MinION provides fast, real-time sequencing results for a wide variety of applications. These included unique or otherwise compelling Point-of-Care analyses, such as pathogen surveillance, which has been achieved in remote geographical locations and even in outer space aboard the International Space Station, as I’ve previously posted.

In contrast to DNA Seq-by-Scan using a nanopore, which is challenged by pore-based differentiation of similarly sized A, G, C, and T bases, DNA Seq-by-Syn has no such limitation as it uses the DNA as a template for base-by-base (i.e. stepwise) detection of enzymatic synthesis of complementary DNA. Various Seq-by-Syn methods and challenges have been discussed elsewhere, and currently available commercial systems include those from Illumina and PacBio. The former employs nucleotides that are reversible terminators equipped with cleavable fluorescent “tags” on each base. The latter detects fluorescently labeled tags on polyphosphates released upon nucleotide incorporation.

The presently featured DNA Seq-by-Syn publication by Stranges et al., which builds upon two earlier reports cited therein, differs from the above approaches by using nanopore-based detection of mass tags rather than fluorescent tags. In principle, mass tags could afford higher accuracy compared to DNA Seq-by-Scan. However, as will now be explained, achieving improved accuracy is far easier said than done.

The general approach taken to demonstrate proof-of-concept for mass-tagged nanopore DNA Seq-by-Syn is depicted below in simplified cartoon form, but involves a true tour de force—in my opinion—of three key technologies. The first is design and synthesis of the nucleotides with appropriate mass tags, which involves very sophisticated chemistry that is best appreciated by reading detailed, extensive supporting information (SI) for Stranges et al. and SI for an earlier publication by Fuller et al. In a nutshell, these nucleotides have 5’-hexaphosphates linked to relatively large mass tags comprised of complex oligonucleotide structures. 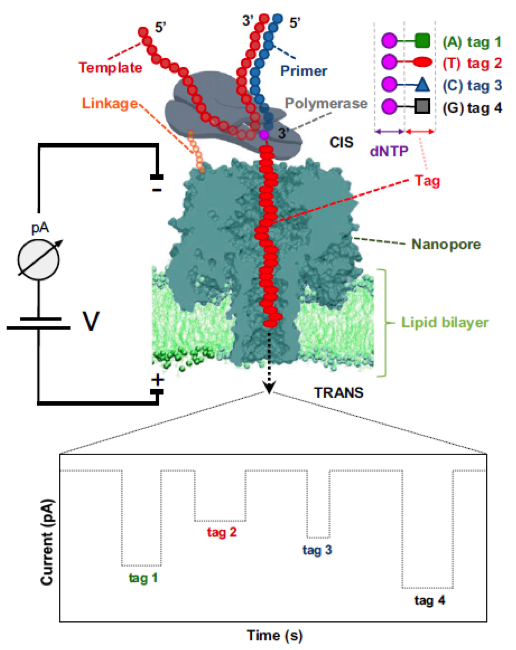 The second area of technical innovation involves attachment of a single molecule of ϕ29 DNA polymerase to each α-hemolysin (αHL) nanopore in such a manner as to retain its enzyme activity and be positioned such that every released mass tag transits through (i.e., is “captured” by) the nanopore leading to base identification by its current signature. As depicted below in two related representations, each of these heteroheptameric pores is comprised of one modified αHL subunit to which a peptidyl SpyTag moiety is attached, and six unmodified αHL subunits. This allows attachment of one ϕ29 DNA molecule modified with a cognate peptidyl SpyCatcher moiety at a predetermined, time-average distance from the pore.

The third key area of innovation deals with insertion of the enzyme-pore conjugate into a lipid bilayer residing on a silanized array (aka chip) of 256 Ag/AgCl electrodes such that there is one functional pore per electrode. Interested readers are encouraged to consult the publication for details, as well as check out related fabrication and methods patents that I found by searching Google Scholar.

The first image shown above depicts what base tag-specific detection would ideally look like if each of the four different bases would have a characteristic current-blockage intensity and persistence. In addition, all pores would ideally function similarly. Not surprisingly, given the stochastic nature of single-molecule systems in general, Stranges et al. found less than ideal behavior.

For example, out of 70 single pores obtained, 25 captured two or more tags, whereas only six of those pores showed detectable captures of all four tagged nucleotides. Data obtained for the pore with the most transitions between tag capture levels (i.e. the best results) is shown below, while results for the other five are given in the SI. 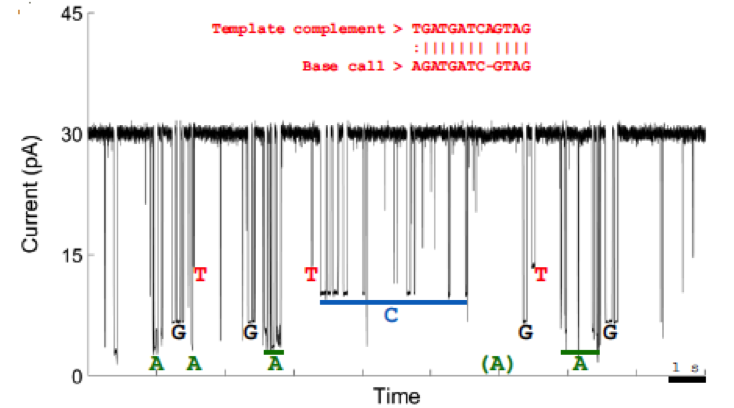 To quote the authors:

“All four characteristic current levels for the tags and transitions between them can be readily distinguished…Homopolymer sequences in the template, and repeated, high-frequency tag capture events of the same nucleotide in the raw sequencing reads were considered a single base for sequence alignment. We recognized 12 clear sequence transitions in a 20-s period. Out of the 12 base transitions observed in the data, ∼85% match the template strand, showing that this method can produce results that closely align to the template sequence.”

Interested readers need to consult and carefully read the SI for Stranges et al. regarding the interpretation of the “repeated, high frequency capture events,” such as that exhibited by C in the above current vs. time plot.

All of the above snippets in aggregate suggest to me that, while this huge amount of work has made progress toward one approach to Seq-by-Syn, many improvements will need to be made before achieving a robust system to successfully compete in the commercial sector.

The relatively large team of 30 coauthors listed for Stranges et al. include the following numbers of investigators and affiliations: 1 at Arizona State Univ., 4 at Harvard, 11 at Columbia University, and 14 at Genia Technologies, which is a Santa Clara, CA company that was acquired by Roche in 2014, and is part of Roche Sequencing.

Acknowledgments in Stranges et al. refer to support by Genia and NIH Grant R01 HG007415, which I found was awarded to coauthors George M. Church (Harvard), Jingyue Ju (Columbia), and James J. Russo (Columbia). The end of the abstract of this grant reads as follows:

“The nanopore chips will be enhanced and expanded from the current 260 nanopores to over 125,000 using advanced nanofabrication techniques. We will conduct real-time single molecule Nano-SBS on DNA templates with known sequences to test and optimize the overall system. These research and development efforts will lay the foundation for the production of a commercial single molecule electronic DNA sequencing platform, which will enable routine use of sequencing for medical diagnostics and personalized medicine.”

The conflict of interest statement in Stranges et al. indicates that the technology described therein (called “Nanopore SBS”) has been exclusively licensed by Genia, and that specified coauthors are entitled to royalties through this license. In addition, Church is a member of the Scientific Advisory Board of Genia.

Long gone are the days when government-funded academic researchers thumbed their noses, if you will, at commercial development. Nowadays almost all academics parlay their government grants into university patents that get licensed to companies, usually with some type of corporate involvement of said academics.

I hasten to add that I’m not implying that NIH-funded academic research being a “seed” for corporate profitability is negative—especially in view of its Small Business Innovative Research (SBIR) program—but rather view it as a paradigm shift for the better, as it allows academic creativity to be harnessed into applications that can hopefully greatly benefit society.

In conclusion, and coming back to George Church, who I highlighted in the introduction to this blog, I must say that he might very well be the academic researcher with the longest list of technology transfer, advisory roles, and founded companies—13 to date—according to a public list that is truly mind boggling, at least to me.

After writing this blog, Roche announced on December 15, 2016 that “it has officially notified Pacific Bioscience (PacBio) of its intention to terminate its [2013>

agreement and efforts to develop a sequencing instrument for use in the clinical research and clinical market using their Single Molecule, Real-Time (SMRT®) technology,” about which I have commented previously. The announcement went on to say Roche would instead focus on “internal development efforts” and “actively pursue multiple technologies and commercial strategies.” A GenomeWeb headline was more specific:  “Roche Will Focus on Genia's Nanopore Technology for Dx Market After Ending Deal With PacBio.”

On December 30, 2016 it was reported that the University of California (UC) filed a patent suit against the Chief Technology Officer (CTO) at Genia, and Genia Technologies, claiming the CTO produced key inventions during his time at UC that he later assigned to Genia, but which should have automatically been assigned to UC. Stay tuned…