We’re all familiar with news events involving dogs specifically trained to sniff out fugitives, explosives, or cocaine (among other things). This remarkable canine ability is due to some fascinating olfactory factoids. A dog's sense of smell is a thousand times more sensitive than that of humans, and a dog has more than 220 million olfactory receptors in its nose, while humans have only 5 million. 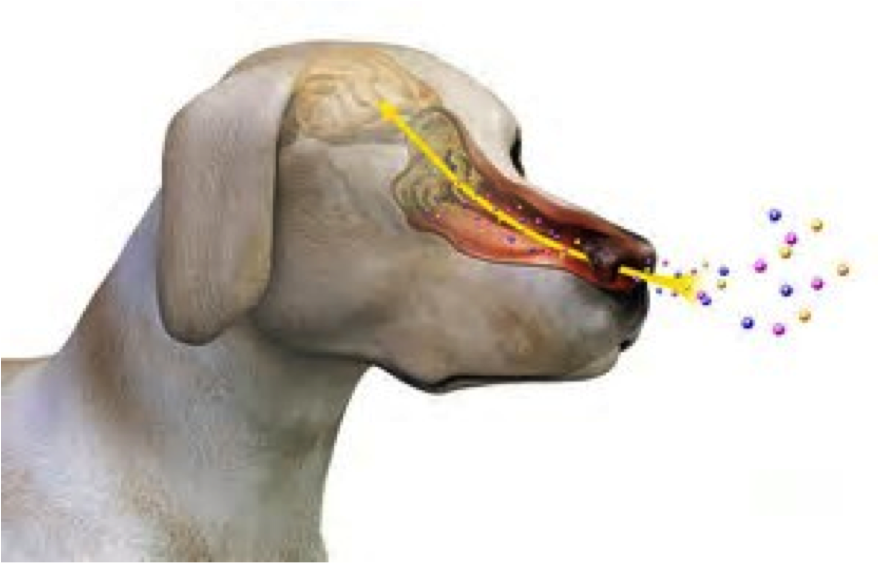 Interestingly—if not amazingly—canine sniffing sensitivity has been investigated as a novel means of detecting cancer by simply smelling urine, or more accurately, smelling volatile organic compounds (VOCs) emitted from a urine sample. The following sections provide synopses of some notable publications dealing with new and improved methods for detection of prostate cancer. While reading this post, keep in mind that the principle here is analogous to humans being able to smell a distinctive VOC in their urine after eating asparagus, which is due to formation of volatile asparagusic acid. But I digress…

The Problem: Prostate cancer represents the fifth most frequent cancer in the world, and according to current CDC statistics is still the number one killer of men in the US, followed by lung and colon cancers, as shown in the chart below. 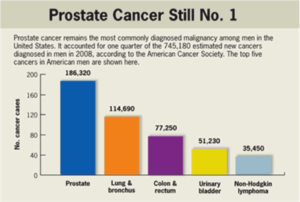 Prostate-specific antigen (PSA) testing is currently used for detection of prostate cancer. Details of the testing process can be read elsewhere, but I’ll briefly describe the steps of the exemplary assay depicted below. In the first incubation phase, specific autoantibodies (present in the sample, calibrators or controls) bind to the immobilized antigen. In the second incubation phase, the dimethyl acridinium ester (DMAE) conjugate reacts with the coated magnetic particle-autoantibody complexes. Non-bound material is washed away after every incubation step, and chemiluminescence is activated by the addition of “trigger” solutions (hydrogen peroxide and an alkali) resulting in oxidation of the ester to a photo-excited form. Return to a stable state is accompanied by the emission of light, which is measured and expressed in Relative Light Units (RLU). A direct relationship exists between the amount of total PSA in the sample and the RLUs detected.

Since PSA testing is a great tool for the detection of prostate cancer, there is a strong need for more accurate tests. According to an NIH fact sheet, approximately 75% of men who have prostate biopsies due to elevated PSA levels DO NOT have prostate cancer. In fact, over 1 million unnecessary prostate biopsies will be performed in the US this year alone. Reported costs for this biopsy procedure range from $1,500-$6,000, resulting in billions of wasted dollars each year. Moreover, this huge false positive PSA rate exposes millions of men worldwide to an invasive procedure that has risks including sepsis and death. 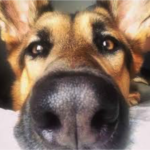 A Canine Solution? In 1989, Williams & Pembroke provided the first evidence for sniffer dogs that could detect VOCs from melanoma cancer in human urine samples. Fast forwarding to 2014, Taverna et al. reported that the olfactory system of highly trained dogs detects prostate cancer in urine samples. Two 3-year-old female German Shepherd explosion-detection dogs were trained to identify prostate cancer-specific VOCs in urine samples from 362 patients with prostate cancer (low-risk to metastatic) and on 540 healthy controls free of any kind of cancer.

While I did not find any such confirmatory follow-up studies with trained dogs, I did find the following investigations of non-canine alternatives to PSA. Interestingly, one of these studies is based on the knowledge that dogs can accurately detect VOCs in urine and the study plans to validate its results with canine studies.

A Chromatographic Solution? As a chemist, its seemed reasonable to me to assume that state-of-the-art separation technology could be applied to VOC analysis to develop a more practical and reproducible replacement of PSA tests. I was gratified to find one such report in 2016 by a British research team that used gas chromatography (GC), depicted below, which is commonly employed for separation and detection of smallish, volatile molecules such as VOCs.

Dubbed “Odoreader,” the GC system was developed by a team led by Chris Probert from the University of Liverpool's Institute of Translational Medicine and Norman Ratcliffe from the University of the West of England in Bristol. The researchers tested the Odoreader on 155 men presenting to urology clinics, of which 58 were diagnosed with prostate cancer, 24 with bladder cancer and 73 with hematuria or weak urine stream without cancer.

For prostate cancer diagnosis, this GC equipped with an automated data analysis system classified samples with 95% sensitivity and 96% specificity, while for bladder cancer diagnosis, the system had 96% sensitivity and 100% specificity. It was concluded that the results of this pilot study “indicate that the GC system is able to successfully identify patterns that allow classification of urine samples from patients with urological cancers,” adding that “larger cohort studies are planned to investigate the potential of this system.”

Not surprisingly, these very promising results have prompted others to investigate analogous GC methods capable of elucidating the structures of key molecules in the mixture of VOCs associated with prostate cancer. Mangilal Agrawal at Indiana University, together with his postdoc, Amanda Siegel, are doing so by coupling the power of GC to separate molecules and the power of mass spectrometry to identify molecules. Then they plan to validate these biomarkers with canine studies much like the one discussed above. Once validated, they will use the biomarkers to develop a non-invasive ‘strip sensor’ or dipstick test that can be used at doctors’ offices to detect the presence of prostate-specific VOCs. They presented preliminary findings using this GC/MS technology at the 2017 National American Chemical Society Meeting in a 15-minute press release video session with Q&A that I watched with interest.

In conclusion, my hope is that these GC based methods, in combination with continued canine studies, will soon lead to much more accurate strip sensor tests to replace PSA testing. These more accurate tests will benefit millions of men around the world by avoiding unnecessary prostate biopsies, and reduce health care costs. 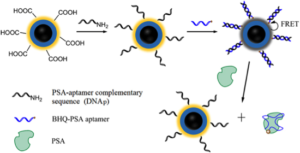 Aptamers (which I’ve blogged about previously and can be prepared from randomized oligonucleotide libraries from TriLink), are also being extensively investigated as potentially more specific prostate cancer detection tests than antibody-based immunoassays. One recent example reported by Deng et al. is depicted below. Basically, a three-layer core–shell nanostructure consisting of a silver core, a silica spacer, and a fluorescent dye RuBpy-doped outer silica layer was fabricated, and allows metal-enhanced fluorescence (MEF). A target-triggered MEF 'turn-on' strategy based on the optimized composite nanoparticles was successfully constructed for quantitative detection of prostate specific antigen (PSA), by using RuBpy as the energy donor and BHQ-2 as the acceptor. The hybridization of the complementary DNA of PSA-aptamer immobilized on the surface of the MEF nanoparticles with PSA-aptamer modified with BHQ-2, brought BHQ-2 in close proximity to RuBpy-doped silica shell and resulted in the decrease of fluorescence. In the presence of target PSA molecules, the BHQ-PSA aptamer is dissociated from the surface of the nanoparticles with the fluorescence switched on.