The use of antisense oligonucleotides (ASOs) as agents for specific downregulation of gene expression is now well established. Most commonly, the ASOs base-pair with an mRNA target and mediate its destruction by RNase H, an enzyme that cleaves the RNA. However, a non-RNase H pathway for ASO-mediated decay has recently been described. ASOs have also been developed for manipulation of alternative splicing patterns, following the pioneering proof-or-concept investigations by Ryszard Kole and his collaborators, as reviewed elsewhere. In this way, depicted here for a generalized case, the ratio of different splice variants can be altered, and the function of a gene changed. 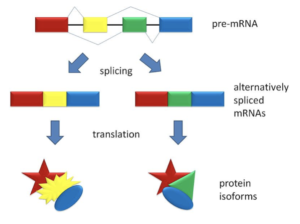 This blog focuses on a recent publication by Wilton and collaborators in Australia that describes the development of guidelines for designing, evaluating, and optimizing splice switching ASOs in vitro. However, before discussing that work, I will give a brief synopsis on the clinical successes of splice modulating ASOs. This class of drugs was presciently foreseen in 2003 by Sazani and Kole, who stated the following: 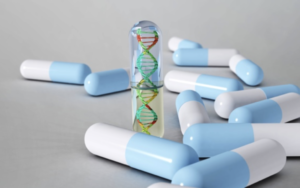 “Considering that there are approximately 30,000 human genes and that up to 60% are alternatively spliced, this new antisense approach may have far-reaching implications in the treatment of a variety of diseases. Oligonucleotides can be used to silence mutations that cause aberrant splicing, thus restoring correct splicing and function of the defective gene. This is important since close to 50% of genetic disorders are caused by mutations that cause defects in pre-mRNA splicing. Thus, targeting splicing with antisense oligonucleotides significantly extends the clinical potential of these compounds.”

In December 2016, Ionis Pharmaceuticals announced that the U.S. Food and Drug Administration (FDA) had approved nusinersen for the treatment of spinal muscular atrophy (SMA) in pediatric and adult patients. SMA is a leading genetic cause of death in infants and toddlers, marked by progressive and debilitating muscle weakness. According to Chiriboga et al., nusinersen is a 2’-O-(2-methoxyethyl) (MOE) phosphorothioate (PS)-modified ASO designed to alter splicing of SMN2 mRNA and increase the amount of functional SMN protein produced, thus compensating for the genetic defect in the SMN1 gene. 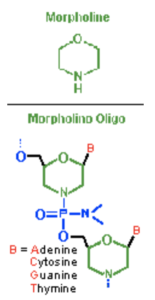 In December 2018, Sarepta Therapeutics announced that it had completed the submission of a New Drug Application (NDA) seeking accelerated approval for golodirsen, a phosphordiamidate morpholino oligomer (PMO, depicted here) for treatment of patients with Duchenne muscular dystrophy (DMD), who have genetic mutations subject to skipping exon 53 of the Duchenne gene. Duchenne is a fatal genetic neuromuscular disorder affecting an estimated one in approximately every 3,500 - 5,000 males born, worldwide.

In addition, the announcement stated that Sarepta’s eteplirsen PMO for DMD in patients with a confirmed mutation of the DMD gene amenable to exon 51 skipping, had also been approved under accelerated approval based on the increased dystrophin levels in skeletal muscle observed in some patients treated with this drug. However, a clinical benefit of eteplirsen has not been established, meaning that continued approval for this indication may be contingent upon verification of a clinical benefit in confirmatory trials.

In December 2018, ProQR Therapeutics announced a publication in Nature Medicine regarding  the results of a clinical trial investigating its splice modulating ASO, QR-110, for the treatment of Leber’s congenital amaurosis 10 (LCA10),  a rare but severe form of childhood blindness. LCA10 is an inherited retinal dystrophy associated with mutations in the CEP290 gene. QR-110 is a single-stranded, fully PS- and 2′-O-methyl (2’-OMe)-modified RNA oligonucleotide designed to correct the splicing defect resulting from the CEP290 c.2991+1655A>G mutation, which is the underlying cause of LCA10. QR-110 is designed to restore normal (wild-type) CEP290 mRNA, leading to the production of normal CEP290 protein. QR-110 is intended to be administered through intravitreal injections in the eye, and it has been granted orphan drug designation in the United States and the European Union, receiving fast-track designation by the FDA.

Despite the proven utility of splice modulating ASOs and increasing interest in this mechanistic class of nucleic acids, published information on the design of these compounds is scarce. Wilton and collaborators have addressed this issue in a September 2019 publication, briefly summarized below. Readers interested in details should consult the full paper at this link.

According to these researchers, splice modulating ASOs are designed to hybridize to elements within or flanking an exon, thereby influencing its recognition by the spliceosome (depicted here) so that the exon is preferentially retained or excised from the mature mRNA, as required. They add that redirection of splicing is presumably a consequence of the ASO preventing positive (enhancer) or negative (silencer) splicing factors from recognizing enhancer or silencer elements in the pre-mRNA transcript. Steric hindrance by the ASO at these sites alters the recognition of normal splice sites by the splicing machinery, leading to alternative selection of exons or intronic sequences in the targeted transcript. 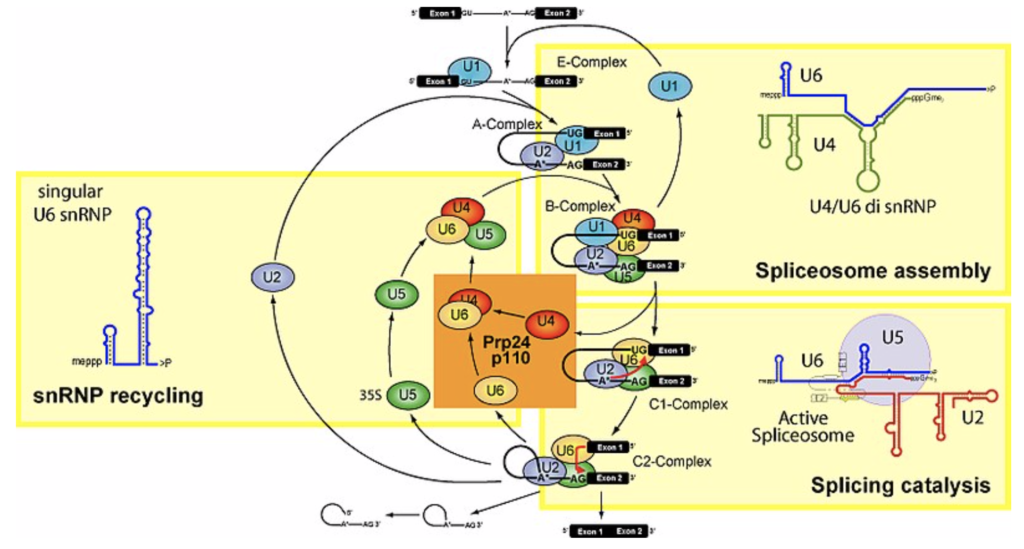 A spliceosome is a large and complex molecular machine found primarily within the nucleus of eukaryotic cells. The spliceosome is assembled from small nuclear RNAs (snRNA) and approximately 80 proteins. The spliceosome removes introns from a transcribed pre-mRNA and joins exons, depicted here in black as Exon1 and Exon2. Taken from commons.wikimedia.org and free to use.

Wilton and collaborators state that several Web-based tools have facilitated the prediction of potential splice factor motifs in any given sequence, and that bioinformatics can contribute to the design of splice switching ASOs. While it is relatively straightforward to target AOs to predicted enhancer or silencer motifs, or to confirmed splice donor or acceptor sites, they cite published examples on how this approach does not consistently yield effective splice altering ASO sequences. In their opinion, “identifying target domains within a pre-mRNA that influence splicing and then refining ASO design through micro-walking [exemplified here>

must be done empirically.”

RT-PCR analysis of ITGA4 transcripts demonstrating refinement of splice switching ASOs targeting ITGA4 exon 3. ASOs tested in a first screen are indicated by red lines and the micro-walked ASOs tested in a second screen are represented by blue lines. Nucleotide positions are -/+ numbers and levels of exon skipping after transfection at 100 nM are % values. Taken from Aung-Htut et al. Int. J. Mol. Sci. 2019, 20(20), 5030 and free to use.

To date, Wilton and collaborators have screened over 5,000 ASOs as potential splice modulating agents directed at numerous gene transcripts linked to genetic diseases that may be potentially amenable to a splice intervention therapy. In addition, they have explored non-productive splicing to downregulate expression of selected gene transcripts. This was achieved through induction of non-functional isoforms by either the excision of exons encoding crucial functional domains, or disruption of the reading frame. Consequently, these researchers have developed the following general guidelines, which are efficient and effective in developing biologically active splice switching ASOs:

Comments on These Guidelines

According to Wilton and collaborators, the use of negative ASO control sequences, whether they be random, scrambled, or unrelated, is essential to confirm specific target modification. Establishing target specificity is particularly crucial in situations where gene downregulation is the desired outcome. However, in many cases of splice switching (either exon skipping, exon retention, or intron retention), the presence of a novel transcript is proof of the anticipated antisense mechanism.

The researchers further note that, depending on the gene and targeted exon, up to two-out-of-three ASOs designed in a first pass can induce some level of exon skipping. However, targeting certain motifs noticeably results in more efficient exon skipping than others, and when developing any ASO for clinical use, the most appropriate compound will be one that induces robust splice switching at a low concentration. 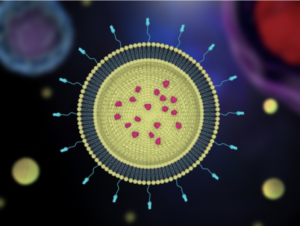 Illustration of ASO delivery via liposomes.

In some cases, individual ASOs were ineffective at modifying exon selection, even after transfection at high concentrations. Wilton and collaborators state that they have frequently found that selective ASO “cocktails”, which include two or more ASOs used in conjunction for a given exon target, mediate exon skipping in a synergistic manner, while each ASO transfected alone is ineffective. Conversely, they have also observed a marked decrease in exon skipping efficiency when two highly effective AOs are combined.

Wilton et al. also recommend confirming the identity of putative exon-skipped products by direct DNA sequencing, as nearby cryptic splice sites may be activated, resulting in the generation of amplicons of similar length to the expected product. A difference of only a few bases in length can be difficult to resolve on an agarose gel, and such differences would be impossible to detect in longer RT-PCR products representing multiple exons.

Upon identification of amenable sites in the pre-mRNA that induce the desired splice modulation, ASOs can be further optimized by micro-walking and shifting the ASO annealing sites in either direction to ensure the most amenable splice motifs have been targeted, as was depicted and exemplified above. If considered necessary and of particular relevance, further micro-walking can be undertaken by moving the lead ASO candidate target sequence a few nucleotides in either the 5′ or 3′ direction. Finally, systematic truncation of a lead ASO can provide the shortest ASO that retains the desired level of potency.

This blog started off by noting the pioneering work of Ryszard Kole, which was first reviewed by Kole et al. in an article titled RNA modulation, repair and remodeling by splice switching oligonucleotides published in Acta Biochimica Polonica in 2004. This initial review, published in a relatively obscure Polish journal, is freely downloadable at this link for readers interested in learning more about the “early days” of this exciting field. The introduction provides the following historical statement that’s worth mentioning: 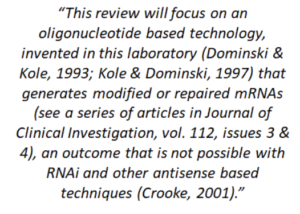 The cited seminal paper in 1993 by Dominski (a postdoctoral student) and Kole is also freely available at this link. The aforementioned review by Kole et al., depicted as the single data point for 2004 in the graph below, has been succeeded by a rapidly increasing number of annual publications in PubMed, all of which can be accessed at this link. Given this trend, and the clinical development of splice modulating ASOs discussed in this blog, it seems likely that future successes will follow for this novel mechanistic class of modified oligonucleotides as therapeutic agents for genetic diseases. 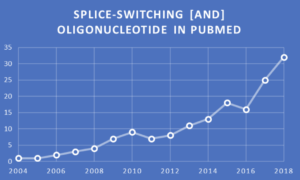