The aim of this blog is to highlight a 2019 report by Kong et al. on the delivery of synthetic mRNA encoding p53 to restore tumor suppressor function to cancer cells as a means of therapy. This study was published in the prestigious Science Translational Medicine journal, and was selected based on two important and novel aspects: the design of novel redox-activated nanoparticles (NPs) for selective release in cancer cells, and the use of synthetic, chemically modified mRNA as the NP-encapsulated “cargo” to encode the protein of interest, i.e. p53. In addition, mutant forms of the transcription factor p53, which is a tumor suppressor factor, are associated with over 50% of human cancers. For this reason and others, restoring normal p53 function could potentially have broad therapeutic applicability.

2019 marked the 40th anniversary of the reported discovery of p53, as chronicled in detail by Soussi, who provides a comprehensive history of p53 from its uncovering in 1979 all the way to 2010. The following chart displays the annual number of p53 publications in PubMed over the last 40 years, and it indicates continued interest in this tumor suppressor protein. During the past 5 years, p53 has been indexed in nearly 5,000 articles per year, which averages to roughly 15 papers per day, 7 days per week, reflecting an amazing amount of scientific attention. 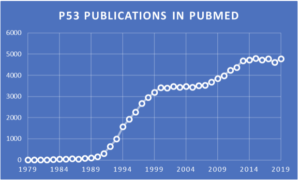 According to Soussi, p53 was discovered in oncology research, but later data has shown that its natural role is much broader. For example, as the ‘guardian of the genome’, p53 monitors all types of stress, from DNA damage to hypoxic metabolism or differentiation, as depicted here.  Studies have also shown that p53 could also be an important player in female fertility, development, stem-cell division, and aging. 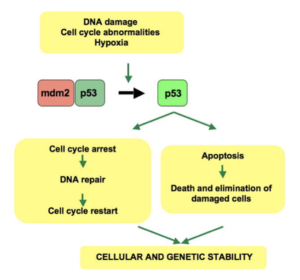 Pathways of p53 protein. Posted by copyright holder Thierry Soussi on commons.wikimedia.org and free to use.

Homo-tetramer of p53 bund to DNA.

Despite the functional complexities of p53, this DNA-binding transcription factor has a firmly established role in human cancers, as reviewed in detail by Ozaki & Nakagawara. The DNA-binding activity of p53, illustrated here, is tightly linked to its tumor suppressive function.

Ozaki & Nakagawara emphasize that mutational inactivation of p53 is a major molecular mechanism behind p53 dysfunction. Cancers bearing a p53 mutation sometimes display a chemo-resistant phenotype. Although the intracellular balance between the expression levels of wild-type p53 and mutant p53 might be a critical determinant of cell fate in response to DNA damage, mutant p53 not only acts as a dominant-negative inhibitor toward wild-type p53, but also exhibits a longer half-life than wild-type p53. Thus, the development of strategies to restore p53 function can possibly be used to effectively treat malignant cancers bearing p53 mutations. The restoration of a functional copy of p53 via viral or non-viral DNA transfection has been published (see Pirollo et al.). However, the recent focus has been on delivery of mRNA encoding p53.

“Why and How to” Deliver p53 mRNA to Cancer Cells

The Kong et al. publication featured in this blog describes a multi-part strategy for “why and how to” deliver p53 mRNA to cancer cells: 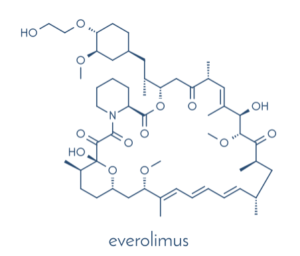 To investigate the feasibility of this approach, Kong et al. used synthetic mRNA to reconstitute p53 expression in two cancer p53 gene-deficient cell lines: hepatocellular carcinoma (HCC), the most common type of primary liver cancer in adults and the most common cause of death in people with cirrhosis; and non-small-cell lung carcinoma (NSCLC), which accounts for about 85% of all lung cancers. The loss of p53 function has been widely detected in ~36% of HCC and ~68% of NSCLC, according to The Cancer Genome Atlas (TCGA database in the cBio Cancer Genomics Portal).

The design strategy for efficient delivery of synthetic p53 mRNA to the cytoplasm employed redox-responsive PEGylated (PEG = polyethylene glycol) lipid-polymer hybrid nanoparticles (NPs), as illustrated here. Because mRNA functions in the cytoplasm, this delivery strategy avoids the nuclear localization that is usually required, as well as the risk of insertional mutagenesis associated with DNA. The complete chemical structure of each of the four NP-forming components, G0-C14, PDSA polymer, DMPE-PEG, and DSPE-PEG, can be found in the freely downloadable Supplementary Materials for the Kong et al. publication.

The PDSA polymer is comprised of readily reduceable disulfide bonds, considering that the intracellular concentration of glutathione (GSH) in tumor cells can be 100- to 1000-fold higher than that in extracellular fluids, these are key components of NPs. The relatively high GSH concentration differential, according to Kong et al., has already been leveraged by others in the formulation of redox-responsive NP platforms for effective intracellular delivery to the cytoplasm.

As described in detail elsewhere, Kong et al. initially carried out in vitro transcription to synthesize p53-mRNA, wherein the 5’ terminal of mRNA was designed with an untranslated region to enhance the translational initiation of the mRNA. Anti-Reverse Cap Analog [ARCA; 3´-O-Me-m7G(5')ppp(5')G>

from TriLink was used with enzymatic polyadenylation to modify the mRNA to increase its stability and translation efficiency. To reduce mRNA immunostimulation, 5-methylcytidine-5’-triphosphate and pseudouridine-5’-triphosphate, both from TriLink, were used to replace CTP and UTP. TriLink also custom synthesized the larger amounts of p53-mRNA subsequently required for this research.

Two different strategies were used to monitor uptake and distribution of NP-loaded mRNA. One approach for detection employed NPs loaded with mRNA encoding enhanced green fluorescent protein, EGFP-mRNA, which was obtained from TriLink with 5-methylcytidine and pseudouridine modifications, and is readily visualized by fluorescence microscopy. EGFP is an analog of the naturally occurring GFP found in jellyfish, Aequorea Victoria, shown here.

The other method for detection used CleanCap® Cyanine 5 FLuc mRNA, which was also obtained from TriLink, and is designed for the analysis of mRNA delivery and translation efficiency. The FLuc mRNA will express a luciferase protein, originally isolated from the firefly, Photinus pyralis, shown here. FLuc is commonly used in mammalian cell culture to measure both gene expression and cell viability. It emits bioluminescence in the presence of the substrate, luciferin. When fluorescently labeled with Cyanine 5 (Cy-5), FLuc mRNA can be directly visualized by fluorescence.

Based on prior work, Kong et al. used a self-assembly approach to engineer lipid-polymer hybrid NPs for effective loading of the above mentioned chemically modified mRNAs. This procedure used the cationic lipid-like molecule G0-C14 for mRNA complexation, and a hydrophobic redox-responsive cysteine-based poly(disulfide amide) (PDSA) to facilitate its cytosolic release. The PDSA was chosen to form a stable NP core under normal physiological conditions, while providing a rapid triggered release of payloads in tumor cells with high intracellular concentration of GSH. Both 1,2-dimyristoyl-sn-glycero-3-phosphoethanolamine-N-[methoxy(polyethylene glycol)>

(DSPE-PEG) were coated onto the surface of the hybrid NPs to simultaneously achieve a relatively long circulation time and high tumor cell uptake through a de-PEGylation effect. 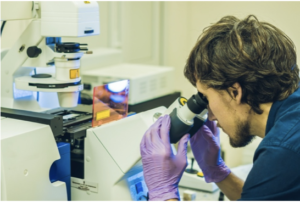 As shown in Supplementary Materials Fig. S9, confocal laser scanning microscopy (CLSM) of the NPs could effectively transport Cy5-labeled mRNA into the cytoplasm of p53-null H1299 NSCLC cells in a time-dependent manner after incubation. Most of the internalized mRNA NPs first colocalized with endosomes (stained with LysoTracker Green) at 1 hour. After 3 hours of incubation, some Cy5-labeled mRNA entered the cytoplasm, and at 6 hours after incubation, a large amount of the mRNA escaped from endosomes and diffused into the cytoplasm. In comparison, naked mRNA could not readily enter the cells after 6 hours of incubation.

To further check transfection efficacy in vitro, EGFP-mRNA was used as a model mRNA. The high transfection efficiency of the EGFP-mRNA NPs was visualized with CLSM, which revealed considerable green fluorescence in both NP-transfected and conventional Lipofectamine 2000-transfected cells, as shown in Supplementary Materials Fig. S10. To quantitatively analyze mRNA transfection, EGFP expression in Hep3Band H1299 cells was measured by flow cytometry. As shown in Supplementary Materials Fig. S11, the EGFP expression exhibited a dose-dependent increase, and the percentage of EGFP-positive cells was significantly higher for the NP-transfected cells than for Lipofectamine 2000-transfected cells, indicating better transfection efficacy with the NP-mediated strategy in both Hep3B and H1299 cells.

Xenotransplantation (xenos- from the Greek meaning foreign or strange) is the transplantation of living cells, tissues, or organs from one species to another. Such cells, tissues or organs are called xenografts or xenotransplants. Xenografts of human tumor cells into immunocompromised mice (aka athymic nude mice, such as the one shown here) is a research technique frequently used in pre-clinical oncology studies.

After five rounds of treatment, all mice were euthanized, and their livers were collected to detect metastases. Numerous metastatic nodules were detected in the livers from the PBS and EGFP-mRNA NP groups, and everolimus showed moderate effects. In comparison, p53-mRNA NPs effectively reduced the number of metastatic nodules, whereas cotreatment with p53 mRNA NPs and everolimus showed the most profound therapeutic effect.

Although I am not an expert in this area of research, I agree with the generalized conclusion offered by Kong et al. that their findings indicate that “restoration of tumor suppressors by the synthetic mRNA NP delivery strategy could be combined together with other therapies for potent combinatorial cancer treatment”.

After writing this blog, I came across a February 2020 review by Hoang et al. on PEG immunogenicity in bioconjugation for drug delivery. In brief, it is stated that although PEGylation is widely used in bioconjugation and nanomedicine to prolong blood circulation time and improve drug efficacy, “it is increasingly recognized that treating patients with PEGylated drugs can lead to the formation of antibodies that specifically recognize and bind to PEG (i.e., anti-PEG antibodies). Anti-PEG antibodies are also found in patients who have never been treated with PEGylated drugs but have consumed products containing PEG. Consequently, treating patients who have acquired anti-PEG antibodies with PEGylated drugs results in accelerated blood clearance, low drug efficacy, hypersensitivity, and, in some cases, life-threatening side effects.” 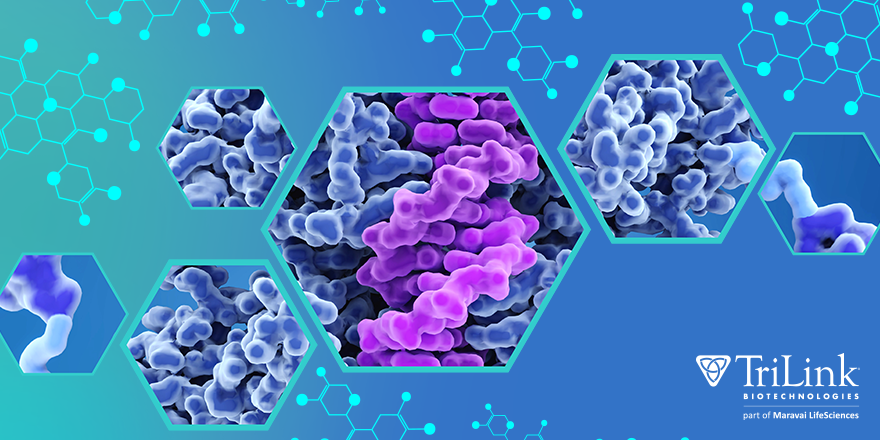