A recent blog here lauded the beginning of American and European clinical studies of gene-editing by CRISPR, which is enabled by sequence-specific interaction of synthetic guide RNAs with genomic DNA targets. At the end of that post, I mentioned that future clinical successes with CRISPR may encounter the challenge of unforeseen drug development issues, as has been the case for antisense oligonucleotide (ASO) and short-interfering RNA (siRNA) approaches. It took a couple of decades for FDA-approved ASO drugs to progress from “bench to bedside,” and the first siRNA drug has yet to be approved.

After opining the above just a few weeks ago, I am pleased to say that another ASO drug and the first siRNA drug have been reported to both be on the brink of FDA approval, based on back-to-back publications of the results of Phase 3 clinical studies in the highly respected Journal of New England Medicine. Interestingly, both of these mechanistically different oligonucleotide drugs are aimed at the same clinical indication, namely, transthyretin (TTR)-related amyloidosis (ATTR). This blog will serve as an introduction to ATTR, as well as a brief summary of both of these very promising clinical studies.

As detailed elsewhere, ATTR represents a class of life-threatening and progressing diseases that is associated with the misfolding of TTR, a major blood protein that is a carrier of retinol (vitamin A) and thyroxine (thyroid hormone T4). TTR is primarily (>95%) produced in the liver as a tetramer, as depicted below. Amyloid aggregation is believed to be a result of decreased tetramer stability, resulting in dissociation of TTR into monomers. These monomers are prone to unfolding, and can self-assemble into oligomers and amyloid fibrils found in peripheral neurons, the gastrointestinal tract, and heart.

The three major forms of ATTR disease are described in the NIH Genetic Home Reference (GHR), which also provides information about their underlying genetics and diagnosis by, for example, DNA sequencing. In hereditary ATTR with polyneuropathy [aka familial amyloid polyneuropathy (FAP)>

According to the GHR, ATTR among Americans of European descent is estimated to affect one in 100,000 people, while FAC is far more frequent among people with African ancestry. For example, it is estimated that this form affects between three to four in 100 African Americans. Although the reasons for this disproportionately higher incidence are unknown, suggestions on how to raise awareness on this issue are discussed in a review I found while researching FAC among African Americans.

For the most part, patients develop a severe disease and die within 5 to 15 years after onset. While these forms of ATTR can be ascribed to a dominant expression of the TTR gene variants, (their number is ~100, as depicted here in an artistic rendering), only wild-type TTR is expressed in senile systemic amyloidosis (SSA), a type of amyloidosis frequently found in elderly people.

The ATTR pathway above depicts the possibility of using oligonucleotides that interfere with mRNA function to block the synthesis of TTR. While blocking synthesis of a specific mutant of TTR is possible, biochemical and clinical evidence suggests that the wild-type TTR can also significantly contribute to the disease. In 2016, results obtained from an in vitro model system were jointly published by Ionis Pharmaceuticals and Alnylam Pharmaceuticals. The study supports the notion that ASOs or siRNAs can block TTR synthesis, and can therefore represent a possible therapy for ATTR. These findings paved the way for each company to independently carry out individual clinical development programs for oligonucleotide drug candidates, as outlined below.

Ionis’ inotersen (formerly IONIS-TTRRx/ISIS 420915), which is a 2′-O-methoxyethyl (MOE)– and phosphorothioate (PS)-modified RNA (orange)-DNA (black) “gapmer” ASO shown here, is an inhibitor of the hepatic production of TTR. Readers interested in ASO chemistry and mechanistic details for gapmers can consult an excellent review by Shen and Corey. 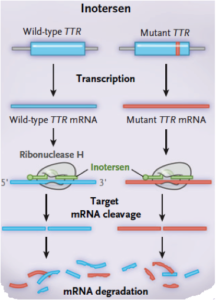 As shown here, the genome of patients with hereditary amyloidotic polyneuropathy contains one copy of wild-type TTR and one copy with a base substitution (mutation), resulting in a change in the amino acid sequence. In hepatocytes, both copies are equally transcribed and translated. Inotersen binds to wild-type and mutant TTR mRNA transcripts, resulting in their degradation by ribonuclease H.

In healthy volunteers, inotersen showed dose-dependent and sustained reductions of circulating TTR levels. Ionis then conducted a randomized, double-blind, placebo-controlled, Phase 3 trial (NEURO-TTR) to determine the efficacy and safety of inotersen treatment in patients with hereditary transthyretin amyloidosis with polyneuropathy, in the presence or absence of cardiomyopathy. According to Benson et al., eligible patients were randomly assigned (in a 2:1 ratio) to receive 300 mg of inotersen or placebo. Patients 18 to 82 years of age received three subcutaneous injections during the first week to achieve near steady-state drug levels, followed by a once-weekly subcutaneous injection for the next 64 weeks.

Primary efficacy assessments favored inotersen. These improvements were independent of disease stage, mutation type, or the presence of cardiomyopathy. The most frequent serious adverse events in the inotersen group were glomerulonephritis [in 3 patients (3%)>

and thrombocytopenia [in 3 patients (3%)>

. It was concluded that “inotersen improved the course of neurologic disease and quality of life in patients with hereditary transthyretin amyloidosis” and that “[t>

hrombocytopenia and glomerulonephritis were managed with enhanced monitoring.”

According to the above cited review by Shen and Corey, and as shown here, Alnylam’s patisiran is a double-stranded siRNA comprised of 3’-end DNA (black), RNA (pink), and 2’-O-MOE RNA (blue) moieties. Partisiran is delivered in complex with a lipid nanoparticle (LNP), (also depicted here), and is described in detail elsewhere by Acuitas Therapeutics, an LNP drug-delivery company that partnered with Alnylam. 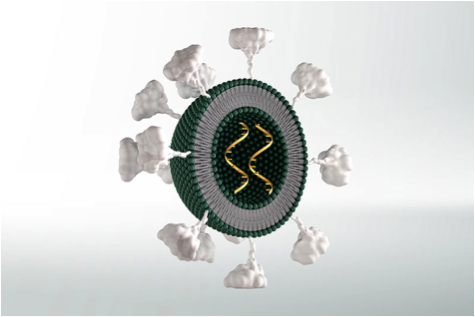 The mechanism of action depicted here for the siRNA patisiran involves the formation of an RNA-induced silencing complex (RISC) with both wild-type and mutant TTR mRNA transcripts and subsequent mRNA degradation. 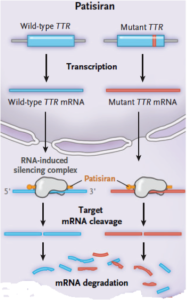 Adams et al. have now reported results from a Phase 3 clinical trial by Alnylam wherein patients were randomly assigned (in a 2:1 ratio) to receive patisiran (0.3 mg per kilogram of body weight) or placebo intravenously over a period of approximately 80 minutes, once every 3 weeks for 18 months. A total of 225 patients 24 to 83 years of age were randomly assigned to receive patisiran (148 patients) or placebo (77). In the patisiran group, the reduction in serum TTR levels was rapid and sustained over a period of 18 months, with a median reduction of 81% that remained similar across age, sex, or genotype.

Primary efficacy endpoints favored patisiran and approximately 20% of the patients who received patisiran and 10% of those who received placebo had mild or moderate infusion-related reactions; the overall incidence and types of adverse events were similar in the two groups. It was concluded that “patisiran improved multiple clinical manifestations of hereditary transthyretin amyloidosis.”

Joel Buxbaum, an MD and Professor Emeritus in the Department of Molecular Medicine at the Scripps Research Institute, accompanied these back-to-back publications about inotersen and patisiran in the Journal of New England Medicine with an Editorial. Based on his publications in this field, Buxbaum is an expert on the molecular basis of acquired and hereditary human disease related to human amyloidosis. After summarizing the results of each clinical trial, Buxbaum posed the following scientifically intriguing questions, which had not occurred to me after reading these two reports.

“Although each of the trials unequivocally shows a therapeutic effect, there remain questions. Would a single patient have a response to each of the therapeutics to the same degree? If so, it is in the patient’s interest to use the least expensive therapy. If not, N-of-1 trials of sequential treatments, although cumbersome, would be required to identify the best treatment for each patient, conditional on the availability of a rapidly responsive, validated surrogate marker of disease.” In regard to the currently trending concept of N-of-1 trials, Buxbaum refers the reader to a commentary in Nature by Nicholas Schork titled Personalized medicine: Time for one-person trials, from which I borrowed this illustration that visually coveys Schork’s point. 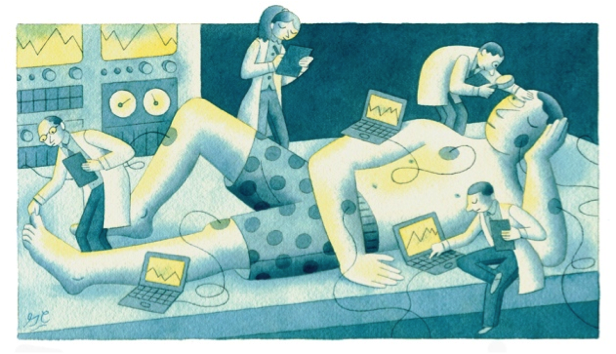 “It is also possible that a combination of interventions would elicit a more pronounced, durable therapeutic effect. Although there remains much work to be done, the trials by Adams et al. and Benson et al. represent a landmark: together, they show that the rate of progression of a peripheral neurologic disease can be slowed, and perhaps ameliorated, through the use of oligonucleotide drugs that are administered systemically.”

In my humble opinion, the promising outcomes of these two trials are indeed great news for people afflicted with ATTR, who can be future recipients of this oligonucleotide therapy. The results are likewise great news for families and friends. The many researchers, who collectively contributed—directly or indirectly—to achieving this milestone, are also undoubtedly pleased by these results.