Colorectal cancer (CRC) is the second most common cause of cancer-related death in the United States and the lifetime risk of developing the disease among Americans is about 1 in 25. While advanced screening and life style changes have led to an overall decline in the disease, it remains common and its prevalence has recently increased in younger people. Due to the unique and well-understood spatial architecture of colon tissue, CRC presents a special niche for physicians and researchers to understand how cellular and tissue spatial organization is critical to disease.

Over recent decades, we have learned the importance of the immune system to cancer development and progression. The “inflammatory tumor microenvironment” or iTME, refers to the complex milieu of inflammatory cells present within and surrounding a tumor. Immune-oncology is now a well-established field that seeks to understand the iTME and exploit it for therapeutic interventions. The intricacies of cell types, and potentially their spatial organization, within the iTME can have very different implications for pro- or anti-tumor outcomes.

As with many types of cancer, different groups of patients have known cellular and clinical differences. Within CRC, two groups that are on opposite ends of iTME architecture include Crohn’s-like reaction (CLR) and diffuse inflammatory infiltration (DII) patients. As their name would suggest, DII patients have a more diffuse immune cell integration at their tumor’s leading edge. CLR patients develop defined “tertiary lymphoid structures” where immune cells cluster. DII patients have a worse prognosis than CLR patients.

The interaction between iTME components and their spatial organization within the tumor area, and how this organization correlates or interacts with the antitumoral response, has not been extensively investigated. A recent paper published in Cell developed a laboratory imaging technique and series of bioinformatic analyses to integrate cell type information with spatial orientation in CRC. 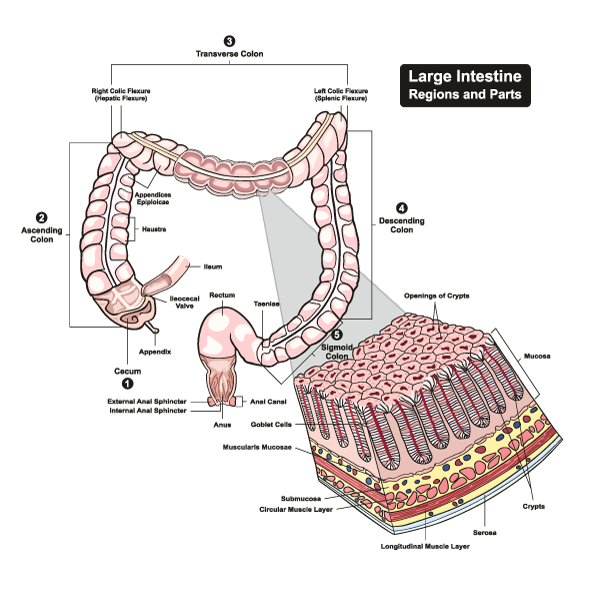 This paper began by developing a complex imaging platform (FFPE-CODEX) to understand the location of different cell types within fixed tissue sections from colorectal cancer patient samples. To undertake this task, the scientists used a panel of 56 highly validated antibodies to stain CRC tissue slides. These antibodies detected a range of epitopes relevant to tumor physiology and inflammation. The antibodies were conjugated to a series of custom oligonucleotides made by TriLink Biotechnologies. A first set of oligos was malemide-modified at the 5’ end to allow for more efficient and orientation-specific antibody conjugation. Antibody detection was achieved through application of a second set of custom fluorescently-tagged oligos (also made by TriLink); each had a compliment in the malemide-modified group. Three different fluorescent fluorophores were used, thus allowing the simultaneous detection of three different oligo-antibody pairs with each image. Iterative stripping and re-probing with new fluorescent oligo probes permitted eventual detection of all 56 antibodies in each sample.

Through multiple high-level bioinformatic analyses, the scientists addressed questions regarding cellular spatial organization in the tissue: How do different cell types create “neighborhoods” within the tissue? How do these neighborhoods interact with each other? How do neighborhood characteristics and interactions differ across patient populations? For example, in DII patients, there was a higher percentage of macrophages present in the detected immune cell clusters, while in CLR patients there was a substantially higher percentage of B cells. Interestingly, of their nine defined “cellular neighborhoods”, only one, associated with follicle biology, was different between the two patient groups. This cellular neighborhood was enriched in the CLR patients, as maybe expected based on known iTME architecture. Through these and additional analyses, the researchers compared the higher level spatial organization of immune cells in CLR and DII patients.

Overall, this paper established that the spatial organization of immune cells within cellular neighborhoods likely influences the antitumoral response and, thus, potentially clinical outcomes and treatment approaches. The connection to clinical strategies, such as biomarker identification and development of targeted therapeutics, remains to be understood with more extensive and expansive applications of FFPE-CODEX.

While complex and well described, this paper did note limitations and challenges to establishing additional successful FFPE-CODEX experiments. Antibody validation can be extremely challenging and is an absolutely critical aspect of this technique. Tissue quality greatly influences the ability of the FFPE-CODEX platform to succeed, even when the tissue is fixed. Imaging artifacts were easily discovered here, but could be very difficult to identify depending on the known qualities of the tissue type being examined. Only a small sample size was used in this publication (35 patients). However, this study provides a framework upon which to expand these analyses for greater analytical power. Scientists are only beginning to investigate complex cellular spatial relationships within cancer biology, yet an improved understanding will likely be hugely informative.