Lungs allow us to breathe, making them critical organs to our life on land. Lung architecture is highly complex and varies considerably between different species, but pig and human lungs are very similar in structure and architecture. For these reasons, pigs are good models for complex lung diseases that other common laboratory animals are not good models for, such as chronic obstructive pulmonary disease (COPD) and cystic fibrosis.

Our lungs fight pathogens that enter when we breathe or aspirate, a critical yet often overlooked function performed at the surface liquid that lines our airways. The airway surface liquid is generated through secretions from two organs: submucosal glands and airway surface epithelia. Ectodysplasin (EDA) is a molecule that directs formation of glands during development, including the development of submucosal glands in the lungs. Submucosal glands are thought to contribute to host defense mechanisms, but this has never been definitively shown. In particular, the relative contribution of surface epithelia versus submucosal glands to host defense systems is unknown. 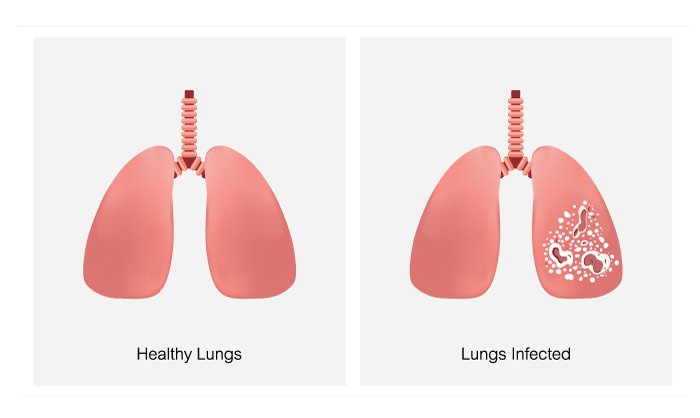 First, the authors created a new genetically engineered pig model. Using CRISPR-Cas9, they inactivated the EDA gene and thus prevented the development of submucosal glands. In this paper, EDA-KO pigs were compared to wild type, age-matched piglets. In order to minimize the possibility of secondary infection in the EDA-KO pigs, the piglets used for this study were 2-8 days old.

Third, they evaluated the consequences of EDA loss on host defense against pathogens at the airway surface liquid. They studied the piglets, both challenged and unchallenged. Through a number of specialized physiological assays that evaluate lung phenotypes and the function of submucosal glands ex vivo and in vivo, the paper showed that the EDA-KO pigs had impaired mucociliary transport and reduced ability to kill a common bacterial pathogen. While a vehicle comparison for the challenge experiments was lacking, the limited number of piglets and the complexity of the assays performed are likely reasonable explanations for the lack of additional study groups.

The authors of this study outlined the limitations of their work, as well as further questions they hope to address. By studying newborn piglets, they could focus on naïve submucosal gland function, although this decision prevented an understanding of submucosal glands in a fully developed adult lung. In addition, this study did not include a full profile of the different immunological molecules present in the EDA-KO pigs, even though this information would be informative in determining which immune pathways were specifically affected by the lack of EDA and submucosal glands. Furthermore, this model was not informative regarding human lung disease models. Further genetic crosses with cystic fibrosis or COPD model pigs would address how the loss of submucosal glands affects the development and progression of these diseases. Finally, the authors noted that EDA is located on the X chromosome and that they observed no overt sex differences in the piglets. However, the effect of sex on any of the functional assays was not discussed and is an interesting unaddressed point.

Overall, the generation of this EDA-KO pig model will serve as an important tool for further research into lung physiology, architecture, and structure in a highly relevant respiratory disease model.