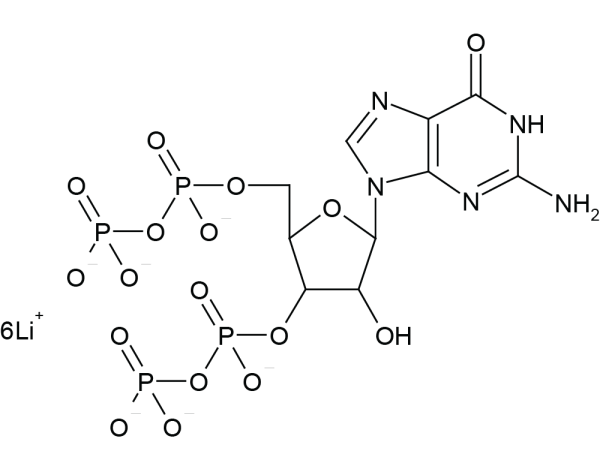 Guanosine-3',5'-Bisdiphosphate (also known as guanosine tetraphosphate, ppGpp or "magic spot*”), is a guanosine analogue containing a diphosphate moiety at both the 5' and 3' hydroxyls. Within the cell, ppGpp regulates transcription of genes affecting important bacterial metabolic processes, such as cell division, motility and adaptation (Potrykus, K., et al., Lemke, J.J., et al.) When prokaryotes and certain plants become nutritionally deficient, amino acid starvation is a direct consequence. During amino acid starvation, guanosine tetraphosphate is an important signal to start the stringent response mechanism. The result of the ppGpp signal is a stop in protein synthesis, leading to adjustments in gene expression levels and causing cells to remain dormant until normal nutritional levels are restored (Artsimovitch, I., et al.) In particular, ppGpp strongly inhibits the synthesis of components of the translation machinery such as tRNA and rRNA (Paul, B.J., et al., Gralla, J.D., et al.) while simultaneously stimulating the transcription of genes involved in amino acid biosynthesis (Artsimovitch, I., et al.). This ppGpp-mediated mechanism prevents the outflow of unnecessary energy resources to help bacteria survive until adequate amino acid levels are reached. Synthesis of ppGpp Guanosine tetraphosphate is synthesized from ATP and GDP during the stringent response mechanism (Figure 1). The RelA and SpoT proteins play a critical role in maintaining the appropriate levels of ppGpp (reviewed in (Potrykus, K., et al.)). Once synthesized, the ppGpp transcription factor binds to the RNA polymerase (Vrentas, C.E., et al.) to regulate the transcription of certain promoters in a process that, in E. coli, is assisted by protein DksA, Figure 2 (Paul, B.J., et al.). In the presence of ppGpp, tRNA and rRNA synthesis is reduced in favor of transcription of amino acid biosynthetic genes. Although the global role of ppGpp is understood, the mechanism by which ppGpp contributes to the regulation of certain promoters has not been fully characterized and varies among different bacteria (Bernardo, L.M., et al.) Molecular mechanisms of ppGpp are still being studied to better understand how different bacteria adapt to extreme circumstances through the stringent response. Stringent Response While ppGpp plays a critical role in cellular survival in vivo, several groups have contributed to our current knowledge of how guanosine tetraphosphate interacts with the RNA polymerase and other transcription factors by in vitro experiments (Lemke, J.J., Vrentas, C.E., Powell, B.S., deLivron, M.A. et al.). Most notably, Richard Gourse’s laboratory at the University of Wisconsin focuses on understanding RNA transcription regulation and the role that ppGpp plays in modulating the response to changing environmental conditions. A well-characterized transcription assay to examine the effects of added ppGpp concentration on promoter activity during in vitro transcription is described in Paul et al. Herein, we provide some general guidelines to follow in any in vitro transcription assay in which the amount of ppGpp is varied to evaluate its effect on the cellular stringent response. * Potrykus and Cashel noted two spots appeared in autoradiograms from extracts of E. coli responding to the stress of aminoacid starvation. According to Irina Artsimovitch of Ohio State University, these spots were tagged as 'magic' because "Microbiologists have wondered for half-century how this small molecule with a relatively simple structure could have such a profound effect on regulating a cell’s survival.” Basic experimental parameters for an in vitro transcription assay using ppGpp: This assay is a basic tool for the study of ppGpp in cell metabolic aspects that are sensitive to changes in the nutrient availability. One of Dr. Gourse’s basic protocols described in Schneider et al. involves the preparation of a reaction mixture that combines the appropriate reaction buffer, a DNA template (supercoiled plasmid or linear), an unbalanced pool of NTPs (where the concentration of UTP is very low), and the RNA polymerase of interest in the presence or absence of ppGpp. The transcription reaction is then incubated for the appropriate time and at the appropriate temperature, quenched using an EDTA and formamide solution, and analyzed by polyacrylamide gel electrophoresis to determine transcription yield. Other notable variations on this protocol have also been described in Krásný and Gourse, Vrentras et al., Paul et al., Carmona et al., and Bernardo et al. NOTE: Control reactions containing buffer instead of ppGpp should be included. NOTE: Salt concentration must be optimized (KCl or NaCl) for each particular promoter. The effects of ppGpp are more pronounced at high salt concentrations (Potrykus, K. et al). "The people I have dealt with have always been professional and have a good working knowledge of products .... a huge plus !!! You offer a product not available through any other source (ppGpp). I have a small lab and even though we could make the compound ourselves, not having to dedicate someone to make the compound speeds up my research endeavors. I think you are great --- really !!!" Victoria Robinson Associate Professor University of Connecticut

Products are for research use only, not for use in diagnostic or therapeutic procedures or for use in humans. Products are not for resale without express written permission of Seller. No license under any patent or other intellectual property right of Seller or its licensors is granted or implied by the purchase unless otherwise provided in writing.

TriLink does not warrant that the use or sale of the products delivered hereunder will not infringe the claims of any United States or other patents or patents pending covering the use of the product alone or in combination with other products or in the operation of any process. All and any use of TriLink product is the purchaser's sole responsibility.

Schofield, Whitman B.; Zimmermann-Kogadeeva, Maria; Zimmermann, Michael; Barry, Natasha A.; Goodman, Andrew L. . The Stringent Response Determines the Ability of a Commensal Bacterium to Survive Starvation and to Persist in the Gut.

Schofield, WB;Zimmermann-Kogadeeva, M;Zimmermann, M;Barry, NA;Goodman, AL; . The Stringent Response Determines the Ability of a Commensal Bacterium to Survive Starvation and to Persist in the Gut

B . ppGpp is a bacterial cell size regulator